The iM-SuperTimer – Update March 2019: Timing the Market with the iM-Stock Market Confidence Level

The 15 component market timing models used are shown in Table-1. The table, updated every Sunday at iMarketSignals.com, shows which of the models are invested in stocks or not. Those invested in stocks have a stock holding percentage of 100%, and those out of the stock market of 0%. Combination models are given a holding percentage proportional to their current stock market investments.

An Importance Factor related to the performance of a model is also assigned. The iM-Stock Market Confidence Level (iM-SMC level) is calculated from the stock holding percentages and importance Factors of the models, rounded to the lowest number which is divisible by 5.

Performance of the iM-SuperTimer
Reconstituted weekly

The performance of a SPY-IEF switching strategy from bond ETF (IEF) to equity ETF (SPY) when iM-SMC > 50% is shown in Figure-1. This strategy, was modelled in excel with weekly reconstitution, and performance includes trading costs of 0.1% of the total switch trade amounts.

Since the iM-SMC level is available on Sundays, trading is assumed to occur on the first trading day of the week thereafter, usually a Monday. Trading should not be delayed by more than two or three days as the model’s annualized return diminishes then significantly. 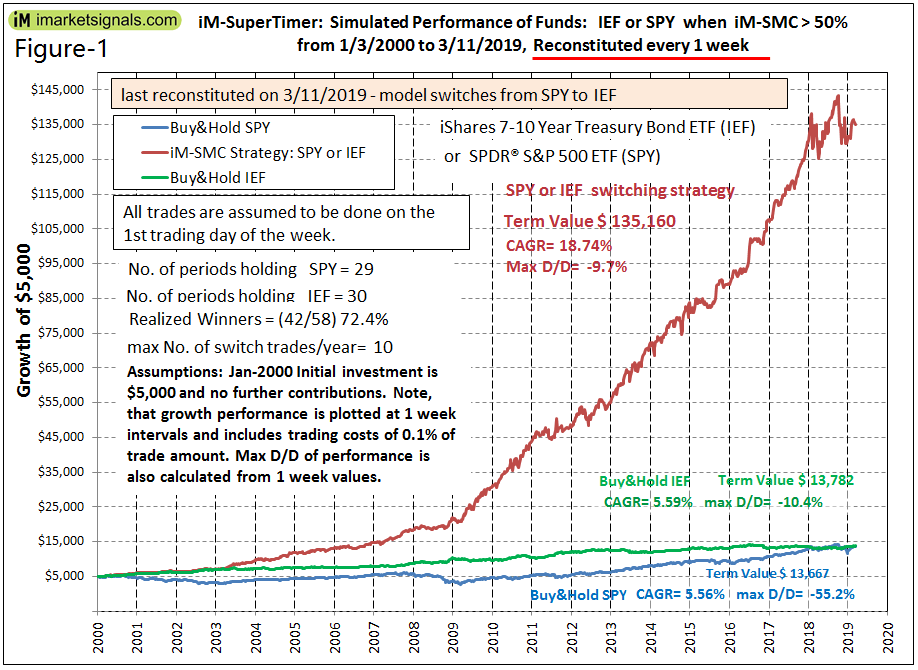 Performance of the iM-4wk-SuperTimer,
Reconstituted every 4 weeks

The performance of the switching strategy when the model is reconstituted ever 4 weeks is shown in Figure-2. The return is lower than for the model reconstituted weekly, but trading effort is reduced by half from that of the 1-week model. Trading should not be delayed by more than three days as the model’s annualized return diminishes then. 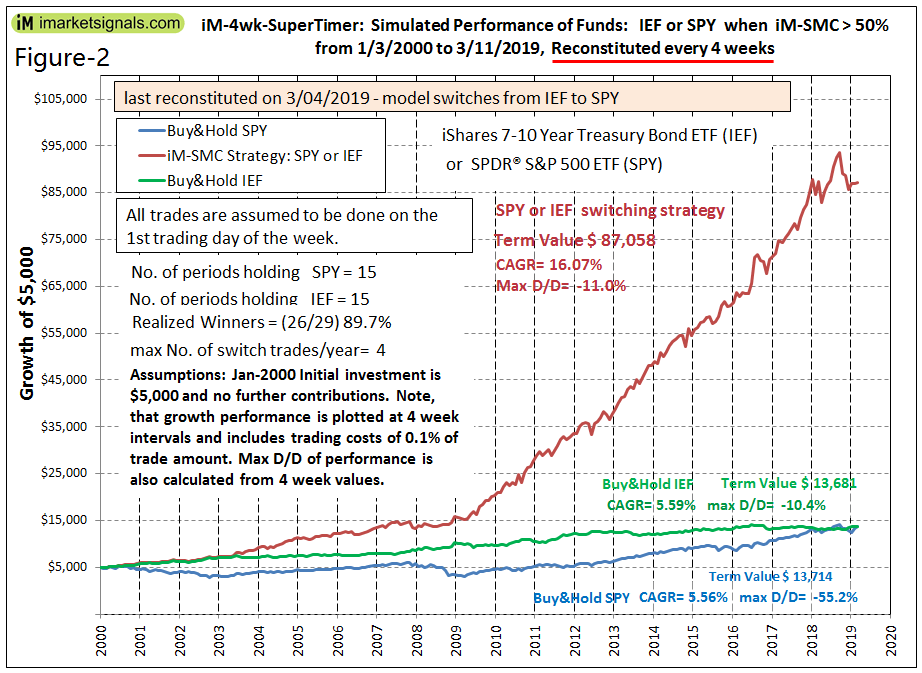 Performance of the iM-13wk-SuperTimer,
Reconstituted every 13 weeks (3 months)

The performance of the switching strategy when the model is reconstituted ever 13 weeks is shown in Figure-3. The return is lower than for the model reconstituted weekly and every 4 weeks, but trading effort is significantly reduced since the 13-week model generated only a fourth of the trades of the 1-week model.

The model is very robust and trading can be delayed by up to two weeks before the model’s annualized return diminishes to any extent. 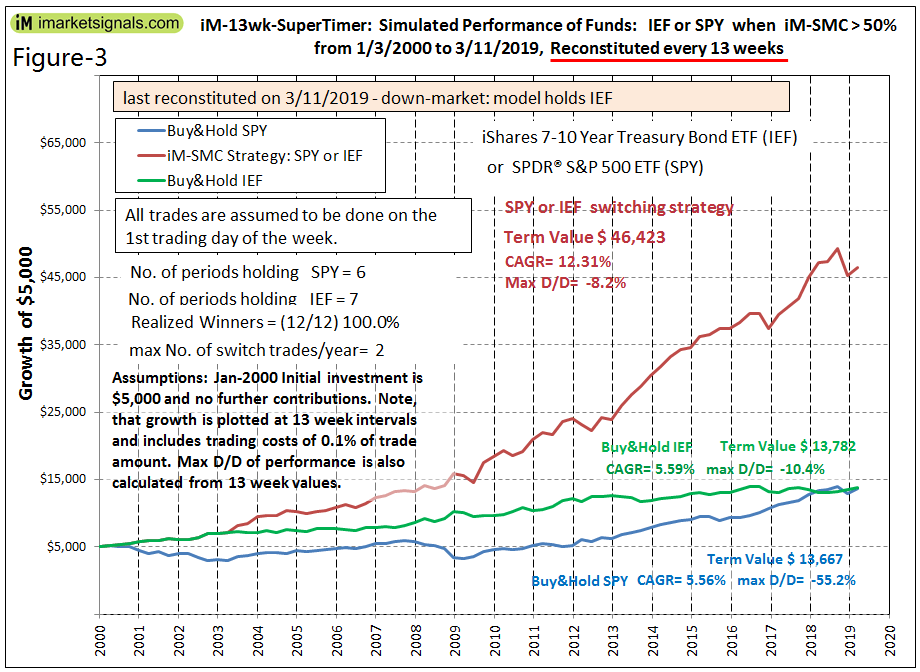 The 13-week SuperTimer model could be of interest to participants in retirement savings plans and education savings plans where the number of asset allocation switches per year is limited. This model shows only 12 switch trades over the 19 year backtest period, with a maximum of two switches occurring in 2004 and 2006.

Despite this low trading frequency the model’s initial Jan-2000 investment would have grown from $5,000 to about $46,000 in 2019, for a total return of $41,000. This is an impressive performance. A buy-and-hold investment of $5,000 in SPY or IEF would have only grown to about $13,700 for a total return of $8,700 over the same period. So, following the few signals from the 13-week SuperTimer one would have added almost 5-times as much to one’s savings as one would have had from holding either SPY or IEF.

The backtests suggest that the iM-SuperTimer based on the Stock Market Confidence Level Strategy could provide useful trading signals for investors and savers.

At iMarketSignals we have provided weekly updates of the iM-Stock Market Confidence Level for longer than one year now. We are currently providing updates for the weekly reconstituted iM-SuperTimer model. We will also provide weekly updates for the iM-SuperTimer models which are reconstituted every 4 weeks and every 13 weeks. Figures 1, 2, and 3 will be updated monthly.

The performance data shown represent past performance, which is not a guarantee of future results. Investment returns and portfolio value will fluctuate, and future signals from these models may not be as efficient as they were in the past.

19 comments on “The iM-SuperTimer – Update March 2019: Timing the Market with the iM-Stock Market Confidence Level”

Posted on Mar 14, 2019 by Georg Vrba
← 19 Comments
With reference to Section 202(a)(11)(D) of the Investment Advisers Act: We are Engineers and not Investment Advisers, read more ... By the mere act of reading this page and navigating this site you acknowledge, agree to, and abide by the Terms of Use / Disclaimer