An analysis using the search term “debt” in Google Trends to predict stock market direction was published April 2013 in Scientific Reports. The researchers, by analyzing changes in Google query volumes for search terms related to finance, found patterns that may be interpreted as “early warning signs” of stock market moves. An investment strategy being long or short the Dow Jones Industrial Average based on weekly search volume data for “debt” between 2004 and 2011 would have made a profit of about 326% versus 16% for a buy-and-hold strategy, according to the authors.

Google Trends reports monthly volume data “n”at the end of a month (t-1). Therfore this data is available for trading decisions at the beginning of the following month, which is month (t).

If the condition MA3 < MA18, or MA3 > MA18, exists for several successive months then the above method ensures that ETFs (SPY) or (IEF) are held for several months, since the method would sell and buy the same ETF simultaneously if conditions do not change. Our analysis from beginning of May-2005 to beginning of Aug-2018 shows 11 periods holding ETF (SPY) and 10 periods holding ETF (IEF), resulting in very few trades per year.

Figure-2, the iM-GT Timer, shows the model’s profit from 2005 to 2018 for various investment strategies. Over this period the SPY-IEF strategy would have realized a 634% profit, eqivalent to an annualized return of 16.2% with a maximum drawdown of -10% in Jun-2012. Over the same period buy-and-hold ETF (SPY) showed a profit of 220%, which is an annualized return of about 9.2%, and a maximum drawdown of -55%. The SPY-Cash strategy performed better than buy-and-hold ETF (SPY) showing a 359% profit with a maximum drawdown of -10%.  Trading costs of 0.05% for each buy- and sell transaction was assumed.

Over the bull-market period Mar-2009 to Aug-2018 the model’s performance closely matched that of buy-and-hold ETF (SPY). The SPY-IEF model’s annualized return would have been 18.0% versus 18.3% for ETF (SPY). For this period the SPY-Cash strategy underperformed ETF(SPY), showing an annualized return of 14.6%. 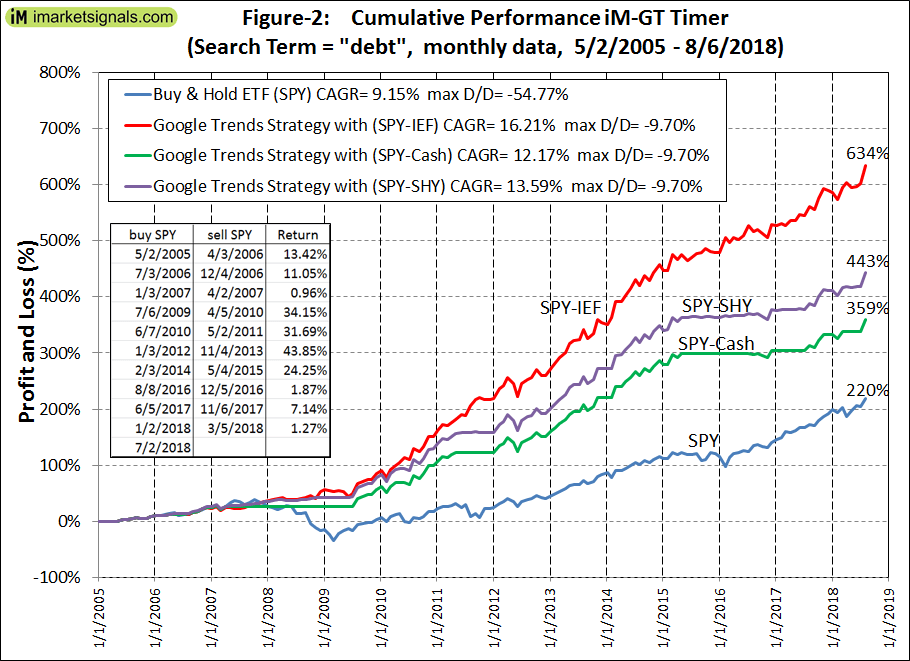 The backtests suggest that a model based on monthly Google Trends data for the search term “debt” may be usefull to identify weak stock market periods. However, it is unlikely that the model will outperform buy-and-hold during bull-market periods. Currently (end of August 2018) the model holds ETF (SPY) since beginning of July 2018.

It is not suggested that one should trade ETF (SPY) and ETF (IEF) according to this model, however this model may provide early warnings of stock market moves. At iMarketSignals we will provide monthly updates for the SPY-Cash model, which may in conjunction with our other market timing models provide usefull advance information on possible market down-turns.

Posted on Aug 28, 2018 by Georg Vrba
← 8 Comments
With reference to Section 202(a)(11)(D) of the Investment Advisers Act: We are Engineers and not Investment Advisers, read more ... By the mere act of reading this page and navigating this site you acknowledge, agree to, and abide by the Terms of Use / Disclaimer