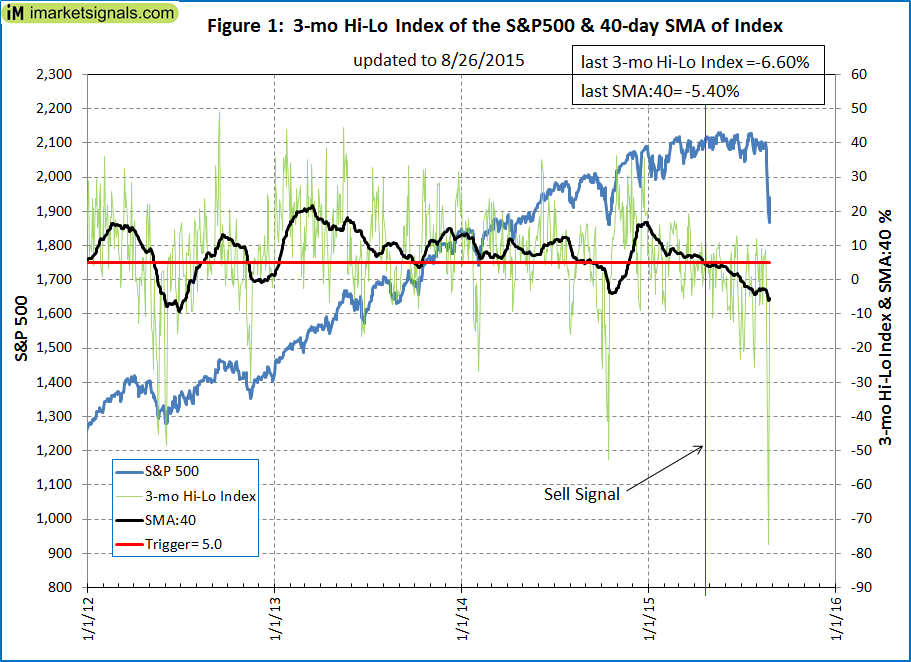 Trading signals are generated only at the end of a week, with trades following on the first trading day thereafter.

Figure 2 shows the performance from Jan-2000 to Aug-2015 of an investment in SPY, the ETF tracking the S&P500 adjusted for dividends, when following the signals and for buy&hold. 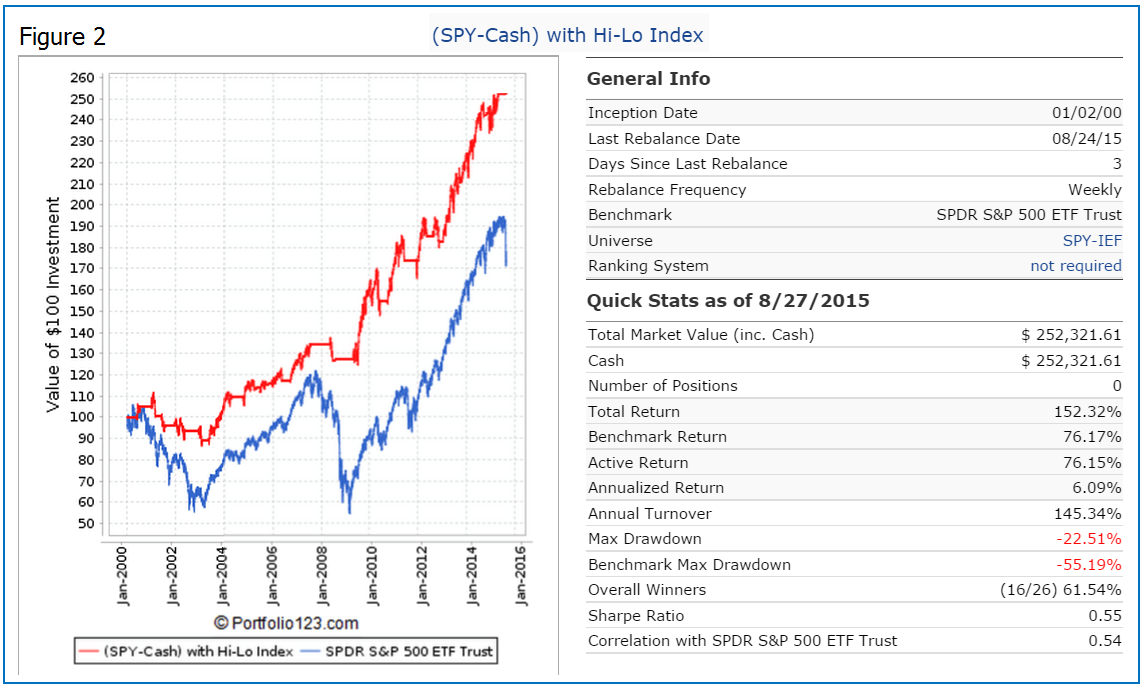 Figure 3 shows the performance of a trading system which switches to IEF, the intermediate Treasury Bond ETF, instead of cash when not in SPY. 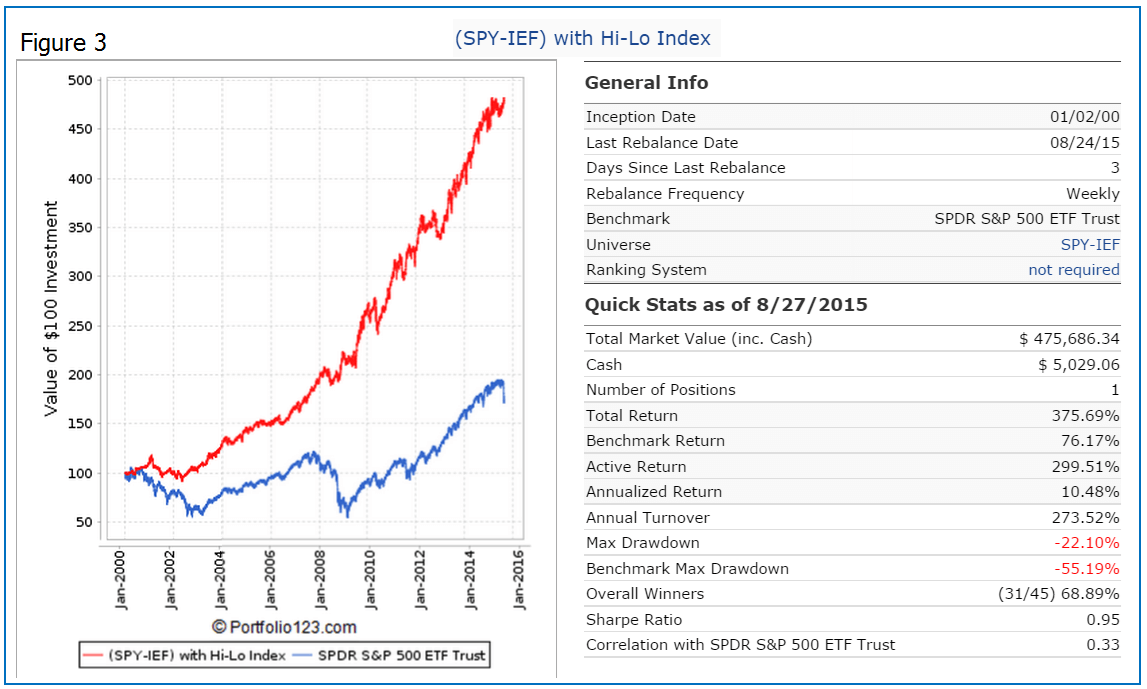 The ETFs are bought and sold at the next day’s average of the Low and High price after a signal is generated. Variable slippage of about 0.10% of a trade amount was applied to provide for transaction slippage and brokerage fees. This would have provided an annualized return of 10.5% with a maximum drawdown of minus 22.1%.

Better returns can be obtained by using the sector ETFs XLY or XLV instead of SPY. As an example, the performance when switching between XLV, the health care ETF, and IEF is shown in Figure 4. 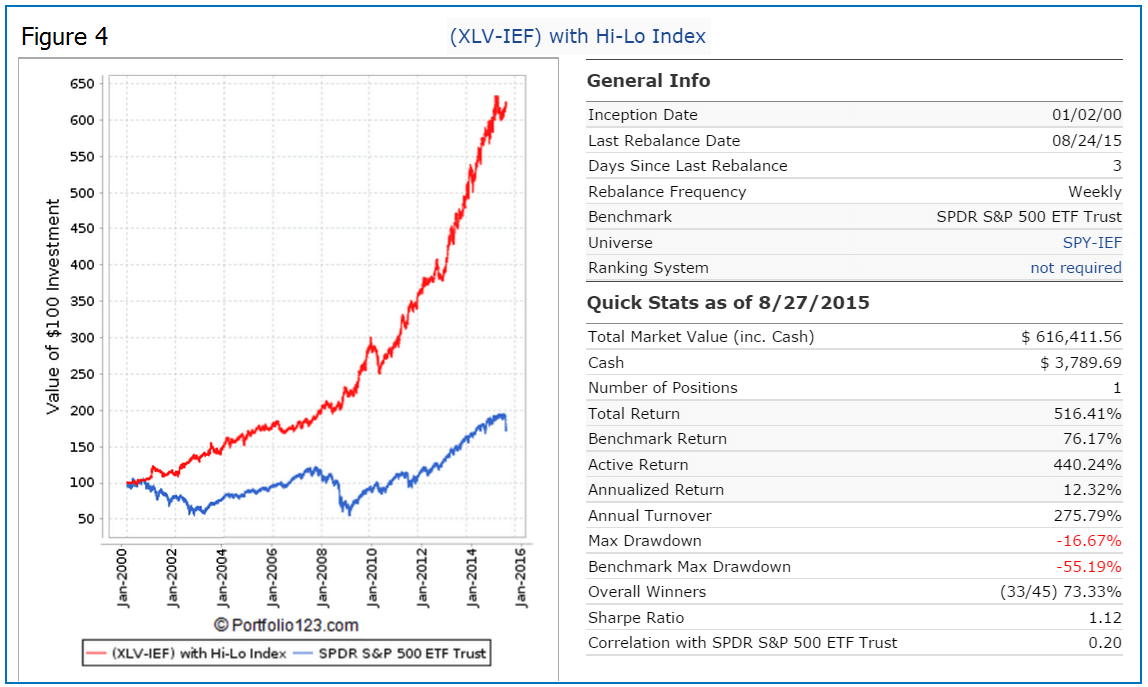 The annualized return would have been a high 12.3% with a maximum drawdown of only minus 16.7%. This is considerably better than the 6.8% annualized return of XLV with a maximum drawdown of minus 39.2% over the same period. In the almost 16 year long period there were only 45 completed trades with a win rate of 73%. Currently the model has been in IEF since April 27, 2015 and thus avoided the recent market decline.

Robustness is the ability of a financial trading system to remain effective under different market conditions. Using an excessive number of parameters may induce overfitting. A model that has been overfitted will generally have poor predictive (out-of-sample) performance, as it can exaggerate minor fluctuations in the data.

This model uses only two parameters, the length of the moving average and the trigger value for the signals. The trigger value of 5% was found by optimizing the model which switches between SPY and cash, but using trigger values ranging from 3.5% to 6.0% all resulted in higher returns with lower drawdowns than a constant investment in SPY.

There is a “solid theory” behind this model, namely determining the trend of the S&P500 index by counting the number of stocks which make new 3-month highs and lows.

Also, since there are only two parameters that can be varied, and the trigger value is insensitive to variations by up to a fifth of its value, this model should be very robust and have good predictive performance characteristics.

This model can be followed live at iMarketSignals, where it will be updated weekly together with our other trading and timing models.

The table below lists all buy/sell transactions that the 3-mo Hi-Lo Index would have generated since 1/3/2000, and the Figure 5 plots the index over said time period. 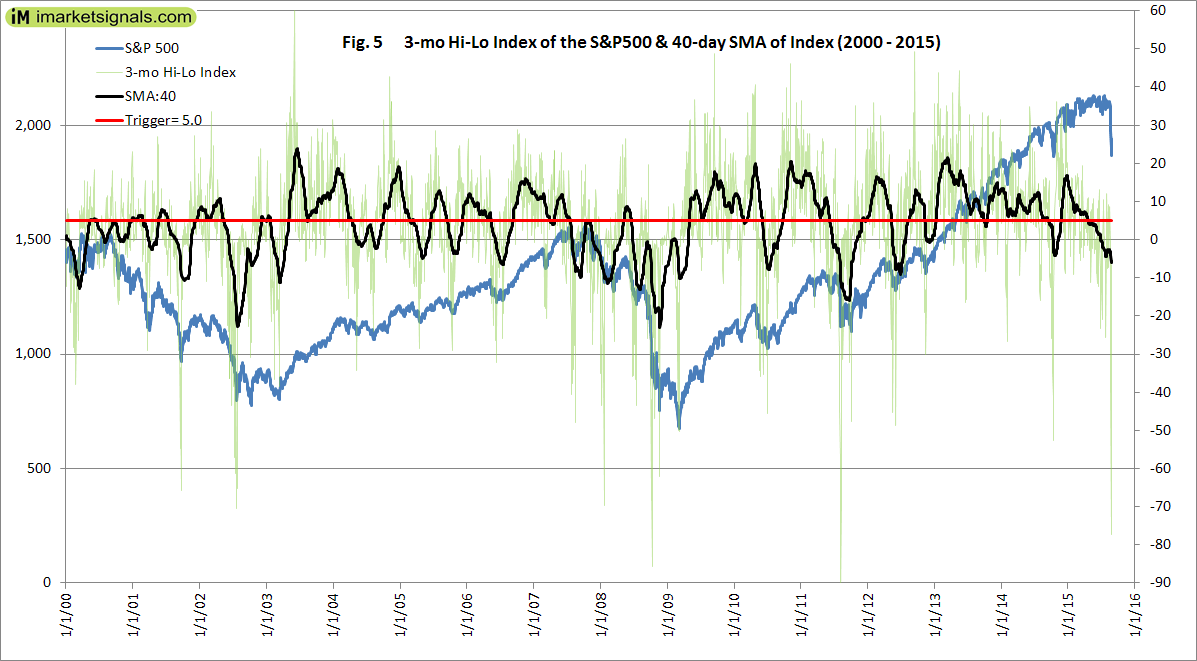 One should be aware that all results shown are from a simulation and not from actual trading. All results are presented for informational and educational purposes only and shall not be construed as advice to invest in any assets. Out-of-sample performance may be much different. Backtesting results should be interpreted in light of differences between simulated performance and actual trading, and an understanding that past performance is no guarantee of future results. All investors should make investment choices based upon their own analysis of the asset, its expected returns and risks, or consult a financial adviser. The designer of this model is not a registered investment adviser.

Posted on Aug 28, 2015 by Georg Vrba
← 25 Comments
With reference to Section 202(a)(11)(D) of the Investment Advisers Act: We are Engineers and not Investment Advisers, read more ... By the mere act of reading this page and navigating this site you acknowledge, agree to, and abide by the Terms of Use / Disclaimer