Is your investment strategy protecting your assets from the next recession? Our Business Cycle Index is a tool to help you gauge recession risk.

Back testing the BCI (short for Business Cycle Index) shows that it would have provided, on average, a 20-week leading signal for the past seven recessions.

The US economy is in uncharted territory. Although the BCI does not signal a recession this week, we need to know how the COVID-19 pandemic has, or has not, influenced the calculations. Table 1 list the economic data that the BCI uses and combines the components for the index in “real time” i.e. the data is only incorporated into the index at its publication date.

From above table it is evident that the full effect of the COVID-19 pandemic on the BCI will only manifest itself after the March and April housing data is published. Today’s Unemployment Insurance Weekly Claims Report had an unprecedented high number of Initial Claims that will reflect in next week’s Continues Claims, which in turn will drive the BCI further down.

We thus can confidently state that BCIp (see the Figure 1 below) will move below 25 which under normal circumstance would have given us about 20 week lead to the recession that we may  already have entered:

The Fed chair says the United States may be in a recession already.

Jerome H. Powell, the Federal Reserve chair, said during a rare television interview on Thursday that the United States “may well” be in a recession already, but that it should get the coronavirus under control before getting back to work. — The New York Times

Figure 1 plots BCIp, BCI, BCIg, the S&P500, and the thresholds (red lines) that need to be crossed from above to below to signal a looming recession.

Nobody can predict the arrival date of the next recession. However, using freely available economic data we derive a reliable signal that warns of an oncoming recession. We designed the Business Cycle Index to signal well in advance the beginning of a NBER-recession. The BCI uses the below listed economic data, downloaded from FRED.

The 6-month smoothed annualized growth rate of a series is a well-established method to extract an indicator from it. We use this method to obtain BCIg, i.e. the calculated growth rate with 6.0 added to it. The BCIg generates on past performance an average 11-week leading recession signal when it falls below zero.

Also, the index BCI retreats from its cyclic peak before a recession in a well-defined manner. This is the basis for the alternative indicator BCIp (and its variant BCIw) which gives an average 20-week leading signal to the next recession when BCIp falls below 25.

A more detailed  description of the BCI can be found here.

As a guide on how to use the BCI refer to Exit Signals for the Stock Market from iM’s Business Cycle Index and to Table 1 in this post.

Figure 2 graphs the history of BCI, BCIg, and the LOG(S&P500) since July 1967, and Figure 3 plots the history of BCIp. Overall 46 years of history that includes the seven last recessions each of which the BCIg, and BCIp, managed to signal. These graphics also include the weeks lead signaled to the then next recession. 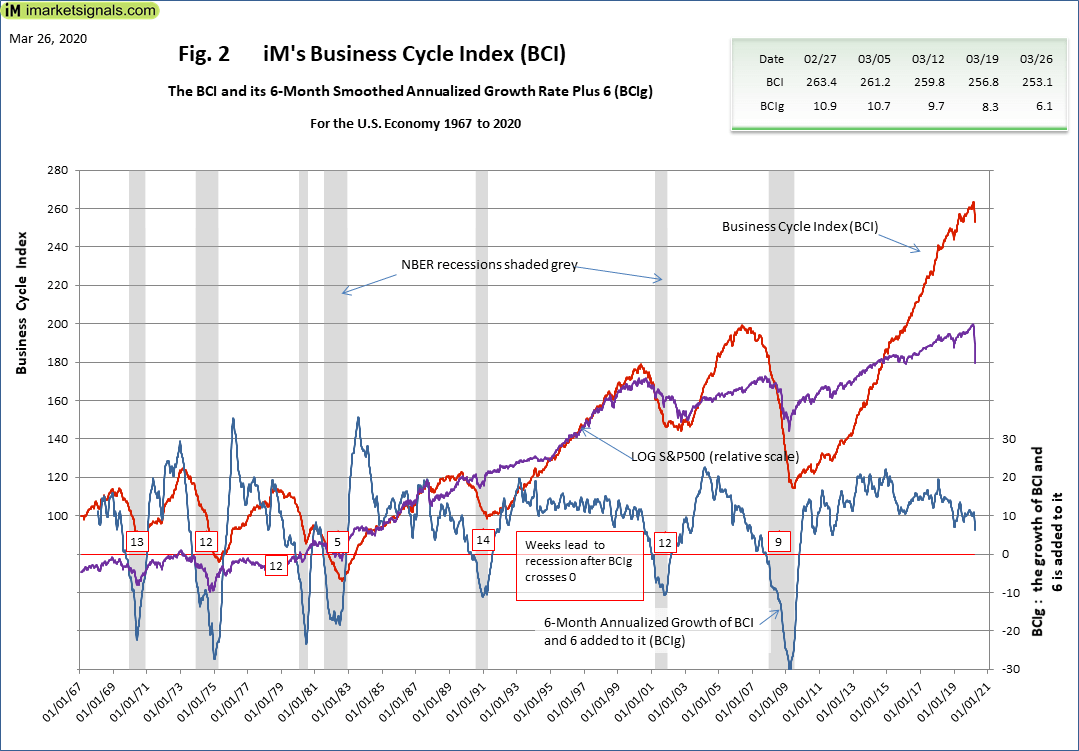 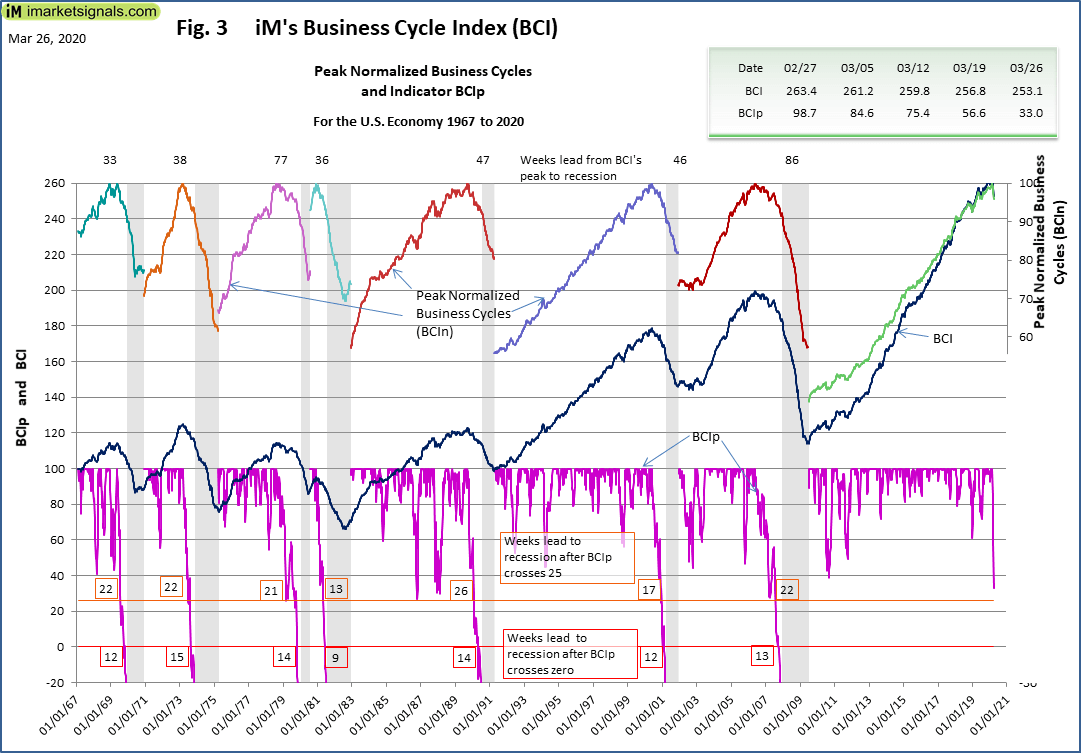 The Unemployment Rate Does Not Signal A Recession Soon: Update – February 7, 2020 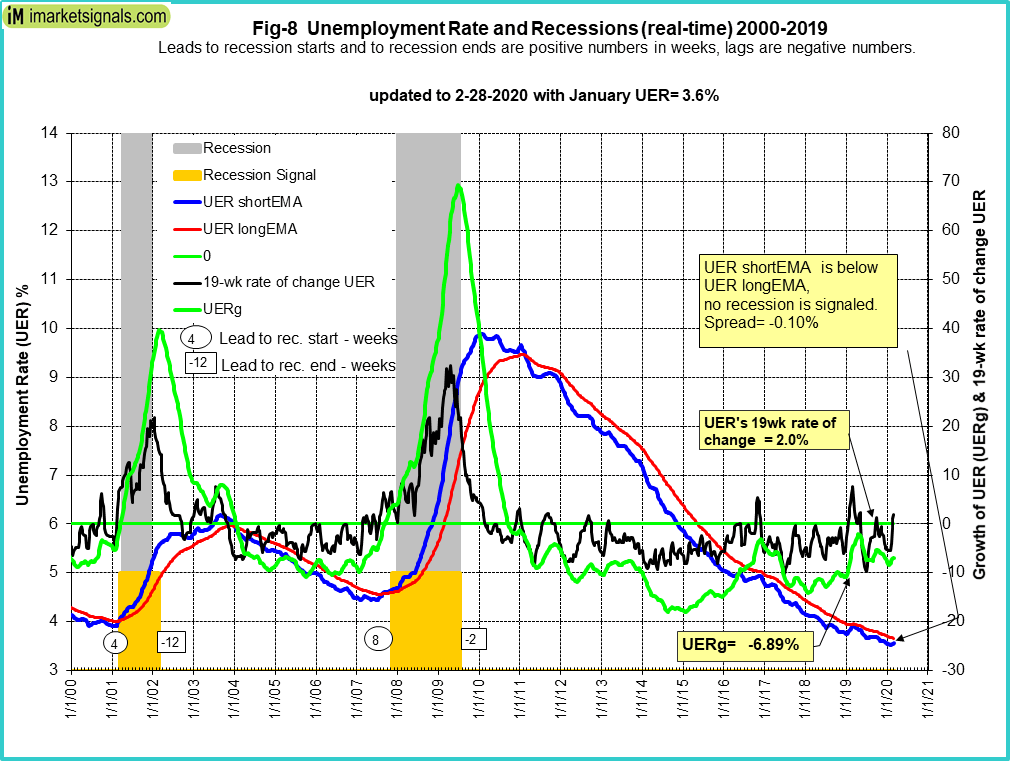 Recent Comments
With reference to Section 202(a)(11)(D) of the Investment Advisers Act: We are Engineers and not Investment Advisers, read more ... By the mere act of reading this page and navigating this site you acknowledge, agree to, and abide by the Terms of Use / Disclaimer