Over the 32 years of rising interest rates, investment in the S&P 500 during the May-October periods provided a negative real annualized return of -0.35%, while the November-April periods produced 5.75%.

In this article, The iM Seasonal ETF Switching Strategy, it was demonstrated that Cyclical Sectors (Discretionary, Industrials and Materials) and Small Caps perform best from November to April, and Defensive Sectors(Staples, Health Care and Utilities) do better from May to October during most years.

To test for seasonality of the S&P 500 we compared the inflation adjusted annualized returns of the S&P 500 with dividends reinvested (S&P-real) for four investment strategies:

All trading was assumed to occur on the first trading day of the last week of April and October.

Also we simulated daily data for a hypothetical money market fund SHV-real using the federal funds rate from 1950 to 2007 and thereafter splicing the data from the iShares Short Treasury Bond ETF (SHV) to it.

In Table-1 is a summary of the real annualized returns for the period 1950 to 1984. The period is divided into two sub-periods which coincide approximately with rising and falling long-term interest rates. It is evident that most of the buy&hold stock market performance was generated during the “good” six months, November to April.

For all three periods, including the period of rising interest rates, investing in the money-market fund SHV-real during the “bad” six months May to October produced higher returns than an investment in the S&P 500.

There are 68 years in the Apr-1950 to Apr-2018 period investigated, which contains 59 rolling 10-year periods. 10-year annualized returns were calculated for each of those periods and the Shiller CAPE-ratio was noted at the beginning of each 10-year period.

In Table-2 is a summary of the 10-yr returns listed according to the prevailing Shiller CAPE-ratio at the beginning of the 10-year investment periods. Returns are shown for:

One can conclude the following:

The model was back-tested on the online simulation platform Portfolio123, which provides historical financial data for stocks and ETFs from 1999 onward. The ETFs SPY and SHV were used. The returns from Portfolio123 are the usual annualized returns, not adjusted for inflation. 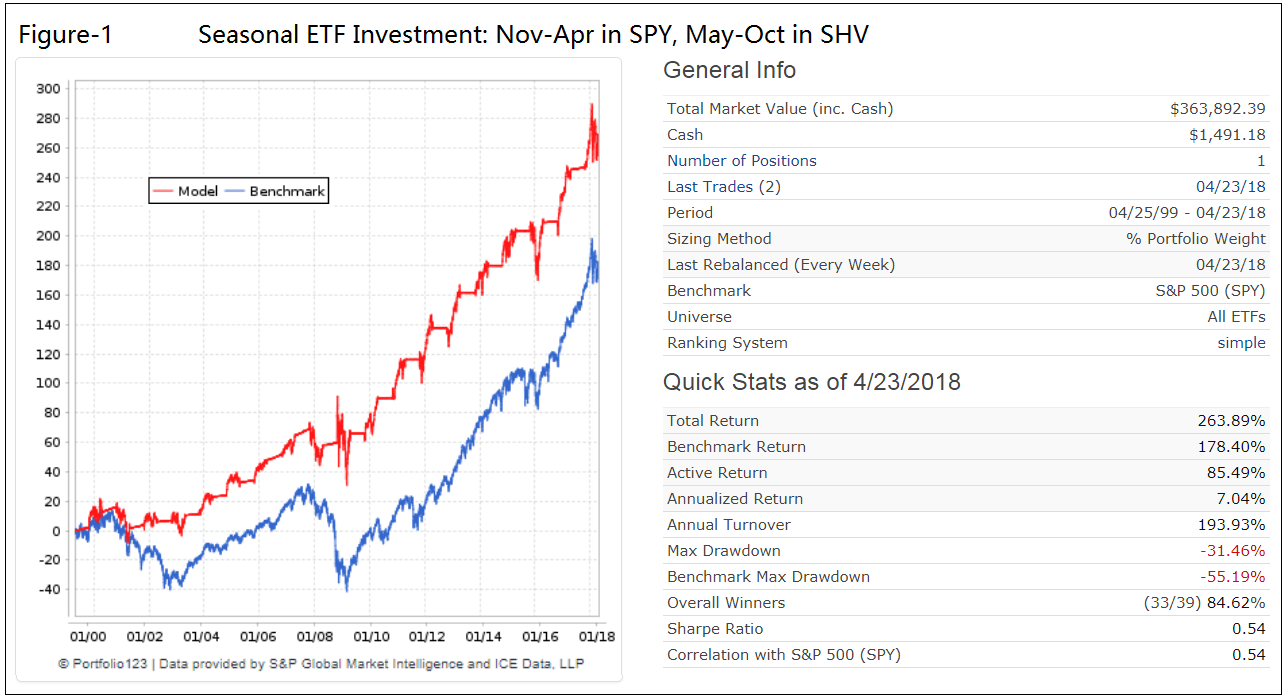 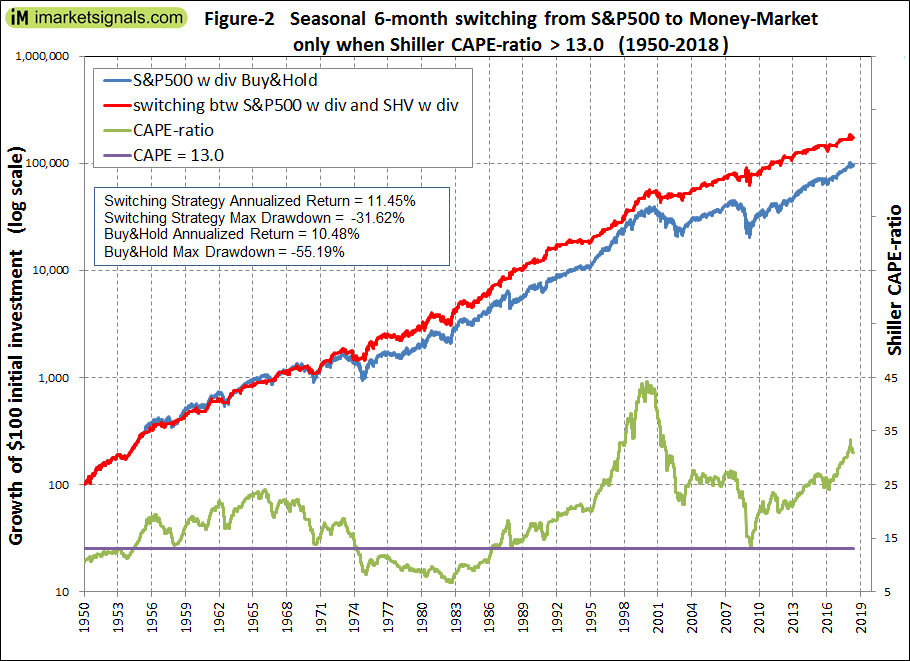 Backtesting with historic data shows that investment returns can be improved by employing a seasonal switching strategy. Minimum trading effort is required as one would only switch between a S&P 500 stock index fund and a money-market fund every six months, namely on the first trading day of the last week in April and October of each year. For periods when the Shiller CAPE-ratio <= 13.0 the investment stays only in the stock market.

Higher returns could have been achieved by using a longer term bond fund instead of a money-market fund. However, we wanted to show the most conservative performance from this strategy, which over the period 1950 to 2018 would have provided a total return of 1.8 times that of a permanent investment in the stock market and about 1.5 times more over the last 19 years.

Currently, the CAPE-ratio is at 31.2. The expected real 10-yr annualized returns for this level are shown in the last line of Table-2. It would appear that the best strategy for long-term investors now would be to only invest in the stock market from November to April and then to shift from investment in the stock market to the safer, money-market-fund-like reserve from May to October. Alternatively, one could employ other market timing strategies, some of which can be found here on iMarketSignals.

Posted on Jun 11, 2018 by Georg Vrba
← 4 Comments
With reference to Section 202(a)(11)(D) of the Investment Advisers Act: We are Engineers and not Investment Advisers, read more ... By the mere act of reading this page and navigating this site you acknowledge, agree to, and abide by the Terms of Use / Disclaimer