The iM-Best1(Sector SPDR) model periodically selects only one of the nine Select  Sector SPDR®  ETFs that divide the S&P500 into 9 sectors.  During adverse market conditions it switches to SH, the ProShares Short S&P500 ETF, or partly to cash.  Using a web-based trading simulation platform, our ranking system, and specific buy and sell rules, this model would have produced an average annualized return of about 31.4% from January 2000 to end of September 2013, versus 2.9% for a buy-and-hold investment of SPY over the same period.  Had one not invested in SH but switched only to cash, then the average annualized return would have been about 20.7%.

This model, when combined with our Best(SPY-SH) system, would have reduced investment risk with negligible reduction of return.  The effect of the combination are described in Appendix C.

The ranking system presumes a rotational nature to equity markets to find the Select Sector SPDR ETF most likely to gain in the future.  The ETFs are ranked weekly taking into account the performance over short and longer periods as well as the Sharpe ratio during up-markets, and during down-markets it uses the standard deviation of weekly returns.

The effectiveness of the ranking system was tested by manually screening each of the individual investment periods (Table 3) to determine the returns for the highest to lowest ranked ETF.  The results, listed below, are the sum of the percentage returns for all trades.  It shows that the highest ranked ETFs did in fact produce the highest cumulative return.

The trading rules are based on volatility, risk premium, earnings estimates together with moving average cross-overs to determine the optimum time periods to be long.  From 2000-2013 there were 10 periods when the model would have gone to cash, but to increase performance the model switches to SH during most of those periods, or portions of them.  A Sector SPDR-Cash strategy would have resulted in a CAGR of 20.7% (Fig. D in Appendix B), whereas the Sector SPDR-SH strategy would have increased this return to 31.4%.

Appendix B details a step by step comparison and development of ranking system and trading rules.

The model assumes the ETFs to be bought and sold at the next day’s (Monday) closing price after a signal is generated.  Slippage of 0.1% of the transaction amount accounting for brokerage fees and transaction slippage were taken into account.  This may be on the high side since all of these ETFs are highly liquid and have huge trading volumes.

The model was backtested from Jan-2-2000 onwards, as this was the first full year when the algorithm had access to all the required indicators. 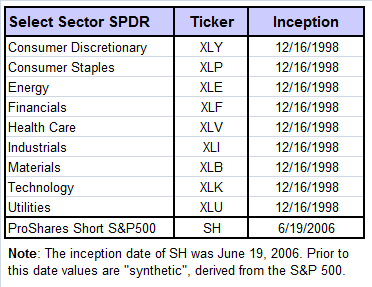 The model selected every one of the 9 sector ETFs at least once, as can be seen from Table 3 in Appendix A where the trades are listed. The proceeds that are shown in the table are only from those trades and do not include dividends, but do provide for transaction costs.

The simulated trading performance of the complete system from January 2000 to end of September 2013 is shown in Figure 1. The annualized return over this period would have been 31.4%, and $100 would have grown to about $4,300. The maximum drawdown was -18.8% in July 2010. All values are with dividends reinvested. 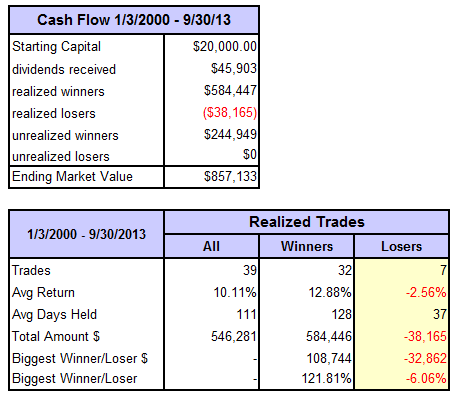 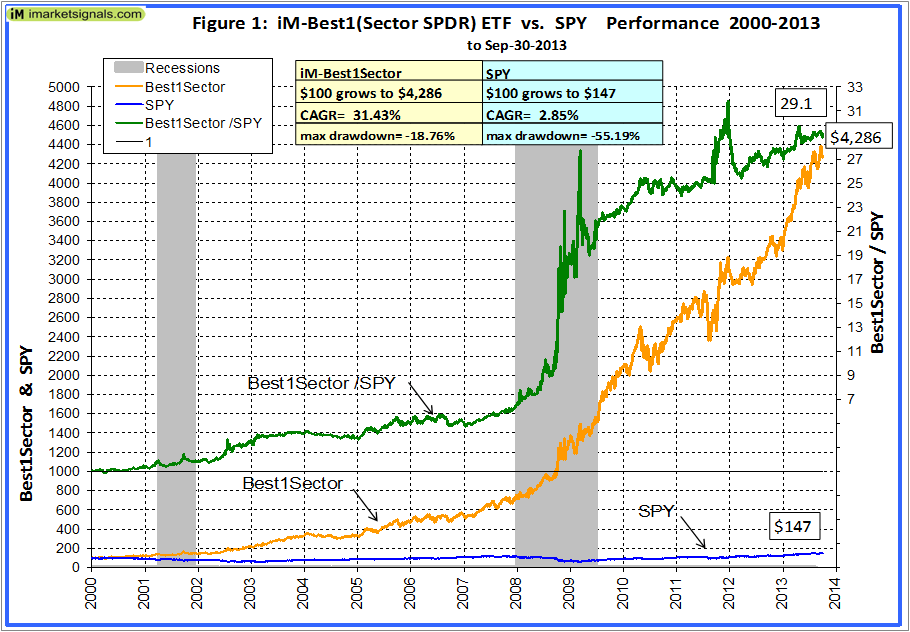 Figure 1 shows the performance of the system. In the chart, the upper green graph is the ratio of the iM-Best1(Sector SPDR) to SPY, the general rising trend of that graph indicates that this model continuously outperformed SPY; it produced 29-times the value which one would have had from a buy-and-hold investment in SPY over the same period. Even during the bull market periods from 2003-08 and 2009-13 did this model out-perform SPY. 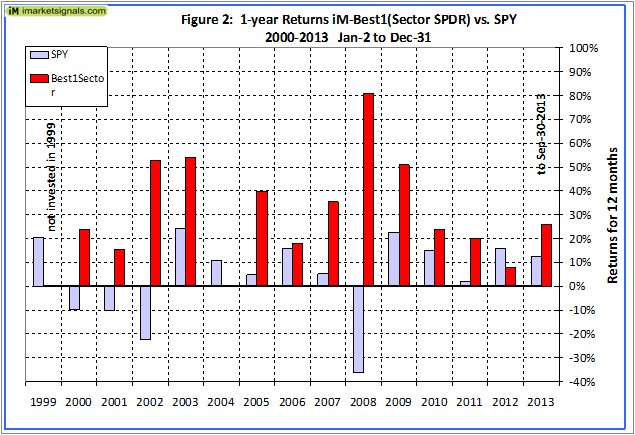 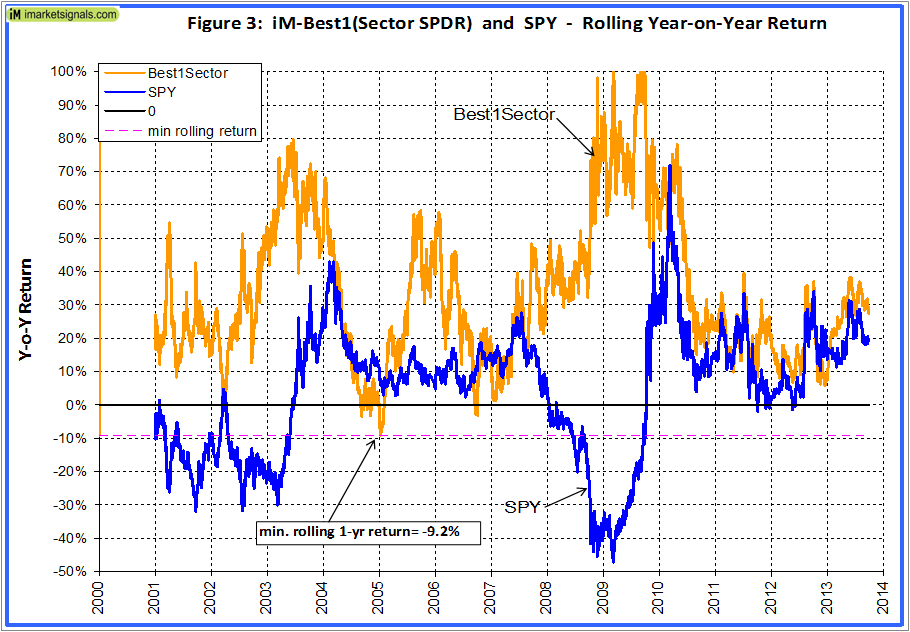 Figure 3 shows the rolling 1-year returns starting each trading day from 2000 to 2012. There was never a significant loss over any 1-year period. The minimum return over 12 months would have been -9% and the maximum 105%. 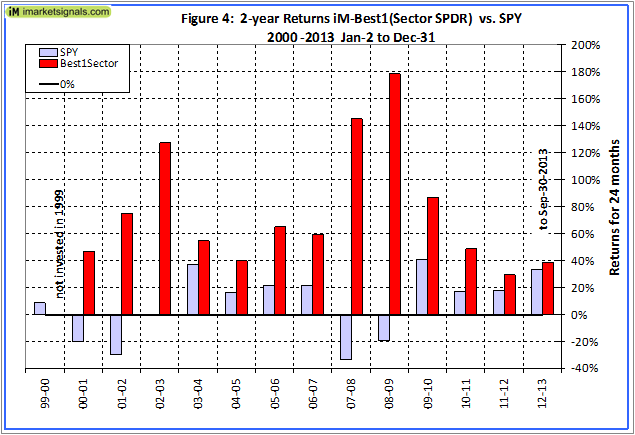 To simulate savings over time, terminal values were calculated to the end of May 2013 for annual hypothetical investments of $1. Starting with a dollar during each of the 13 years from 2000 to 2012, one would have invested a total of $13 cumulatively by the end. Summing the 13 terminal values, this strategy would have netted this dollar-per-year investor $156 at the end of 13 years.

Following a buy-and-hold strategy in SPY, one would have only $20.42, about 13% of what iM-Best1(Sector SPDR) would have provided. Furthermore, the lowest annualized return for any of the 13 time periods was 20.5% and the average for all the periods was 31.5%. This is shown in Tables 1 and 2 in Appendix A. 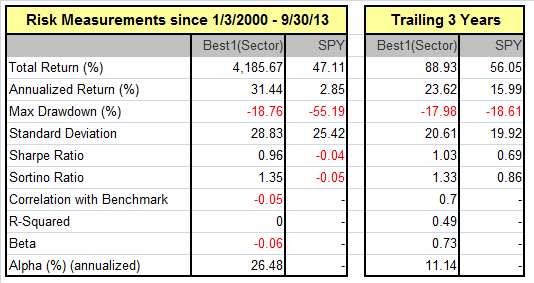 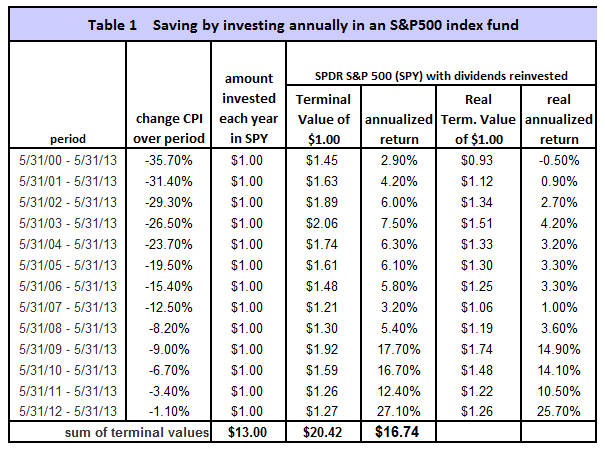 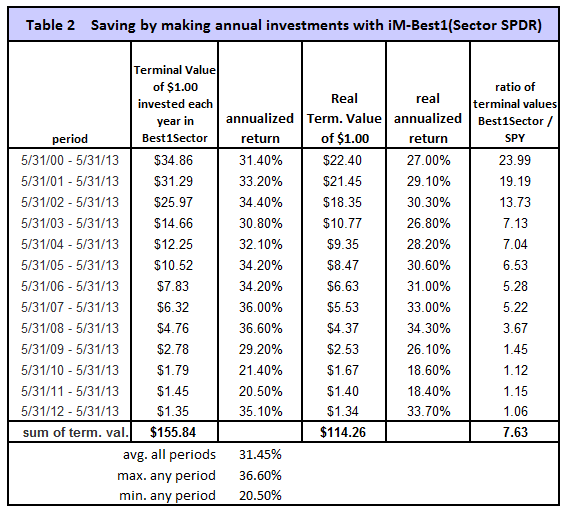 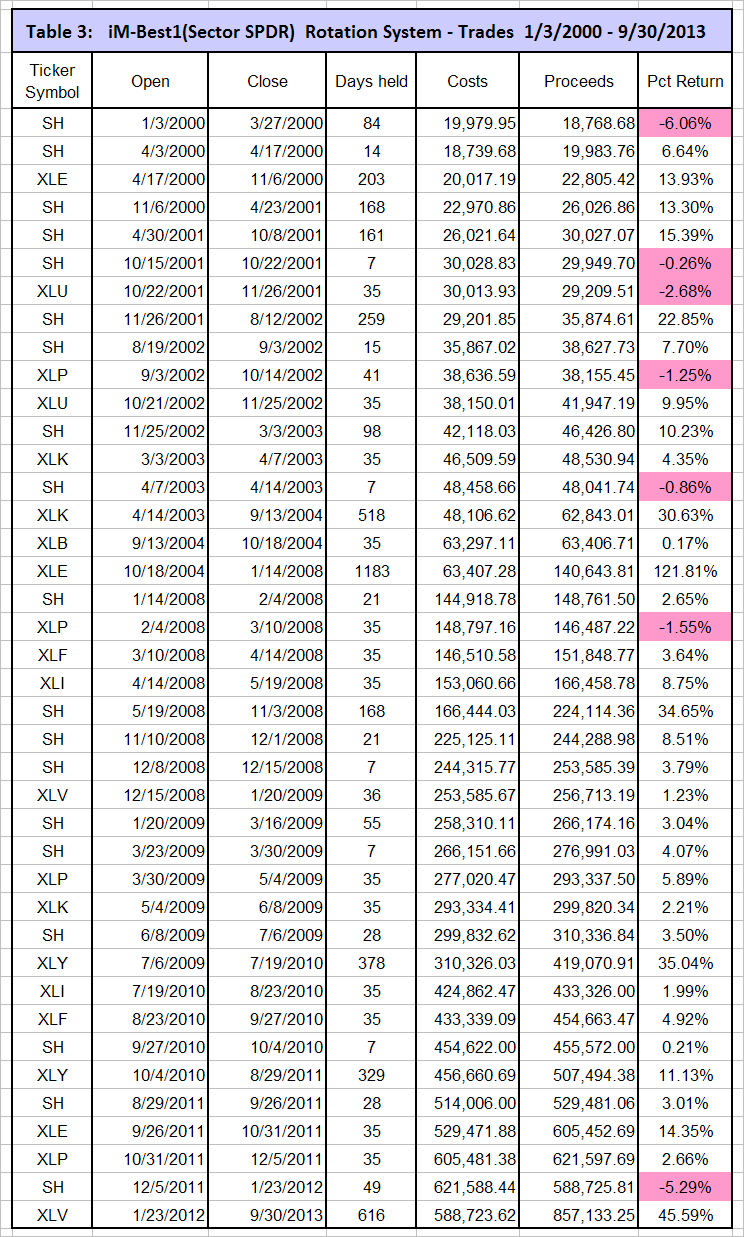 Appendix B – Performance under varying conditions and rules

Figures A to E demonstrate the system’s performance under various scenarios, showing the effect of market timing and the inclusion/exclusion of SH. The simulation period is from 1/2/2000 to 10/5/2013.

The effectiveness of the ranking system is evident from Figure A. This shows that the return becomes almost 3-times that of a buy-and-hold investment of SPY when utilizing only the ranking system to periodically select the highest ranked sector ETFs.

Also Figure C shows the effect when SH is included and the ranking system is able to select it according to the ranking rules, which should favor SH during down-market periods. There are no buy timing rules for this scenario, and thus the selection is rank based only. This would have produced a high annualized return of 22.2

The correlation between Best1(Sector SPDR) and Best(SPY-SH) is a relatively low 0.53 as shown in the table below, signifying that the combination should have improved risk measures, which is indeed the case.

Posted on Oct 16, 2013 by Georg Vrba
← 39 Comments
With reference to Section 202(a)(11)(D) of the Investment Advisers Act: We are Engineers and not Investment Advisers, read more ... By the mere act of reading this page and navigating this site you acknowledge, agree to, and abide by the Terms of Use / Disclaimer