This model switches between SSO (ProShares Ultra two times daily S&P500 ETF) and TLT (iShares 20 Plus Year Treasury Bond ETF) depending on market direction. Using a web-based trading simulation platform and only market timing buy and sell rules in the algorithm, then this model would have produced an average annual return of about 38% from January 2000 to end of December 2013, versus 3.5% for a buy-and-hold investment of SPY over the same period. This model is currently (Jan-8-2014) invested in SSO.

The market timing rules use volatility, risk premium, earnings estimates together with moving average cross-overs and include the following parameters:

The simulated trading performance of the system is shown in Figure 1 further down. The annualized return from January 2000 to end of December 2013 was 38.5%; $100 grew to $9,560 over this period. The maximum drawdown was 27.3% in October 2002. All values are with dividends reinvested. (Note, that the inception date of SSO was June 2006, values before that date are synthetic, derived from the closing prices of the S&P500.)

The model assumes an initial investment of $20,000 on Jan-3,2000. It either holds SSO or TLT. To December 31, 2013 there were 63 trades completed, 48 of these were winners and 15 losers, as summarized in the tables below, and listed in Table 3 in the Appendix. The amounts shown include transaction fees of $83,549 arising from brokerage fees and slippage. 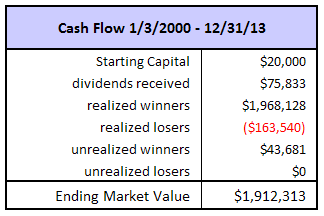 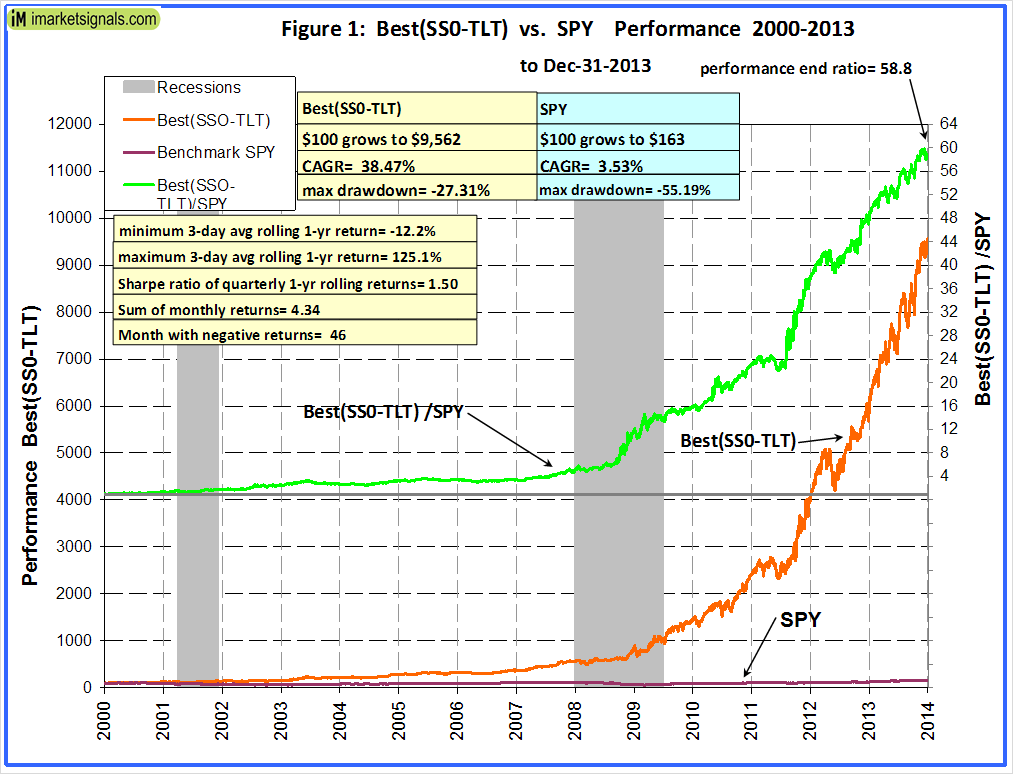 In above chart, the upper green graph is the performance ratio of the Best(SSO-TLT) to SPY. A rising trend of that graph indicates when Best(SSO-TLT) outperformed SPY; it produced about 59 times the value which one would have had from a buy-and-hold investment in SPY over the same period. 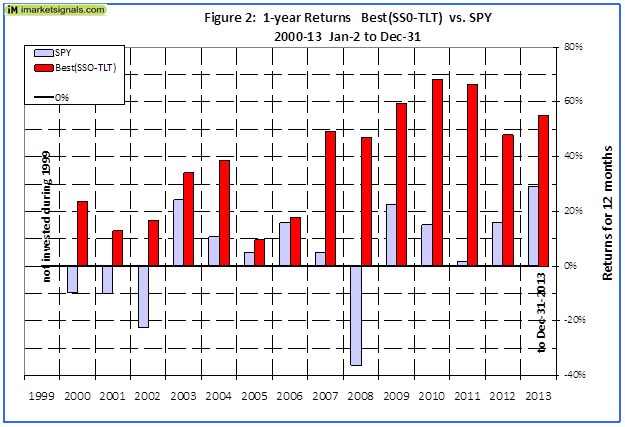 Annual performance from January to December ranged from a maximum of 68% for 2010 to a minimum of 10% for 2005, as can be seen in Figure 2. There was never a loss over those periods. 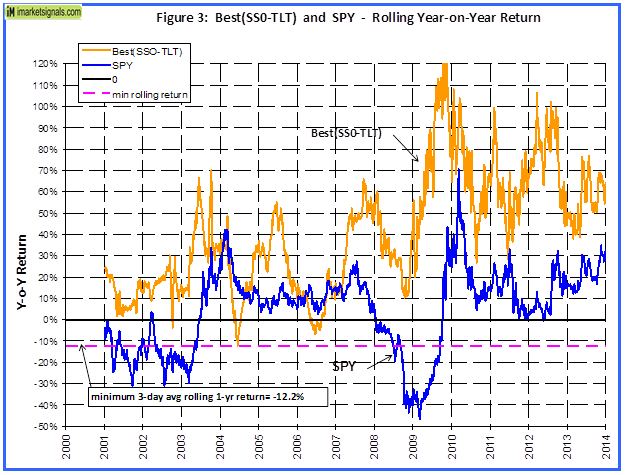 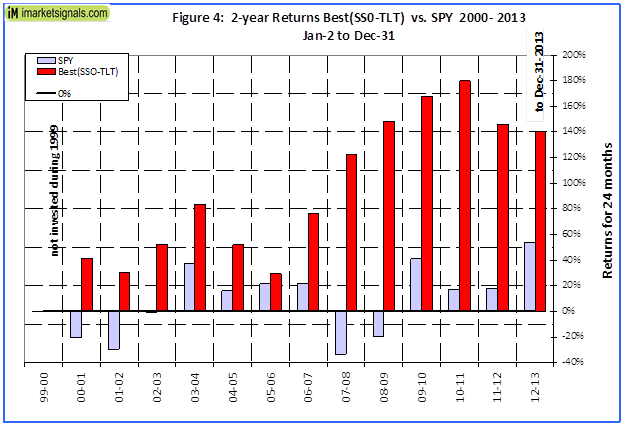 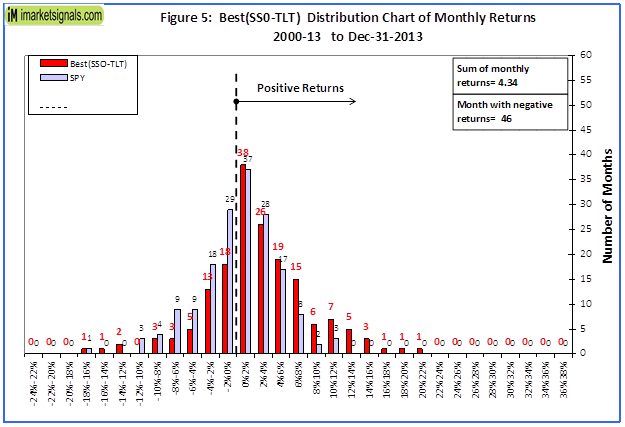 Figure 5 shows the distribution of monthly returns. There were a total of 168 months in the period under consideration. Best(SPY-TLT) produced positive returns during 122 months and only 46 months had negative returns, as is evident from the chart above. SPY had 73 months of negative returns.

To simulate savings over time, terminal values were calculated to the end of May 2013 for annual hypothetical investments of $1. Starting with a dollar during each of the 13 years from 2000 to 2012, one would have invested a total of $13 cumulatively by the end. Summing the 13 terminal values, this strategy would have netted this dollar-per-year investor $342 at the end of 13 years.

Following a buy-and-hold strategy in SPY, one would have only $22, about 6% of what Best(SSO-TLT) provided. Furthermore, the lowest annualized return, for any of the 14 time periods was 38% and the average for all the periods was 54%. This is shown in Table 1 and 2 in the Appendix.

Correlation with other “Best” ETF models

The correlation between Best(SSO-TLT) with Best(SPY-SH) and Best1(Sector SPDR) is fairly low, 0.35 and 0.35, respectively, with 1.0 signifying 100% correlation. Thus a combination of Best(SSO-TLT) with Best(SPY-SH) and Best1(Sector SPDR) should produce a high return with low drawdown. This was tested with a combination model where the three component models were equally weighted. The combo showed an average annualized return of 34.5% from Jan-2000 to end of Dec-2013 with a maximum draw-down of only -12.8%. Also, over any 1-year period, starting at any day from Jan-2000 to Dec-2012, the return from the combo would never have been less than about 3%. 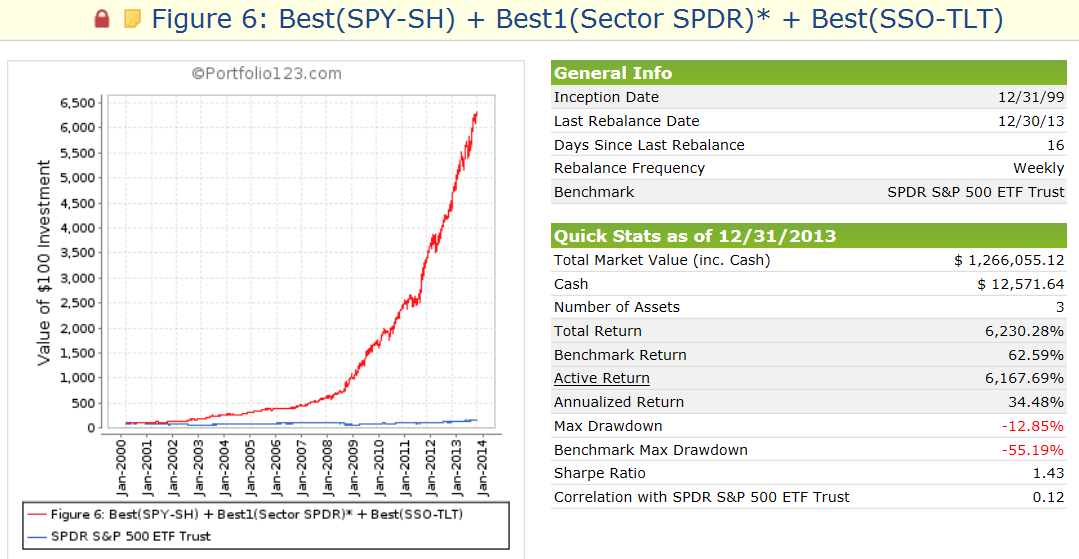 A downloadable MS Excel workbook was set up to calculate the profit and loss of a model’s trading history using historic prices and dividends. All profits and dividends were reinvested. The performance of the model was calculated when:

No slippage was applied to the trades, however for each transaction a $10 fee was included. This statistical analysis uses SPY up to July 2006 and changes to SSO thereafter as SSO was launched on June 21, 2006. The results are tabled below and depicted graphically in Figure 7. 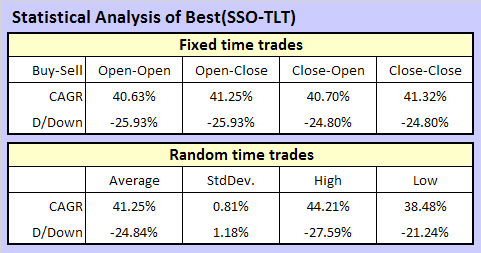 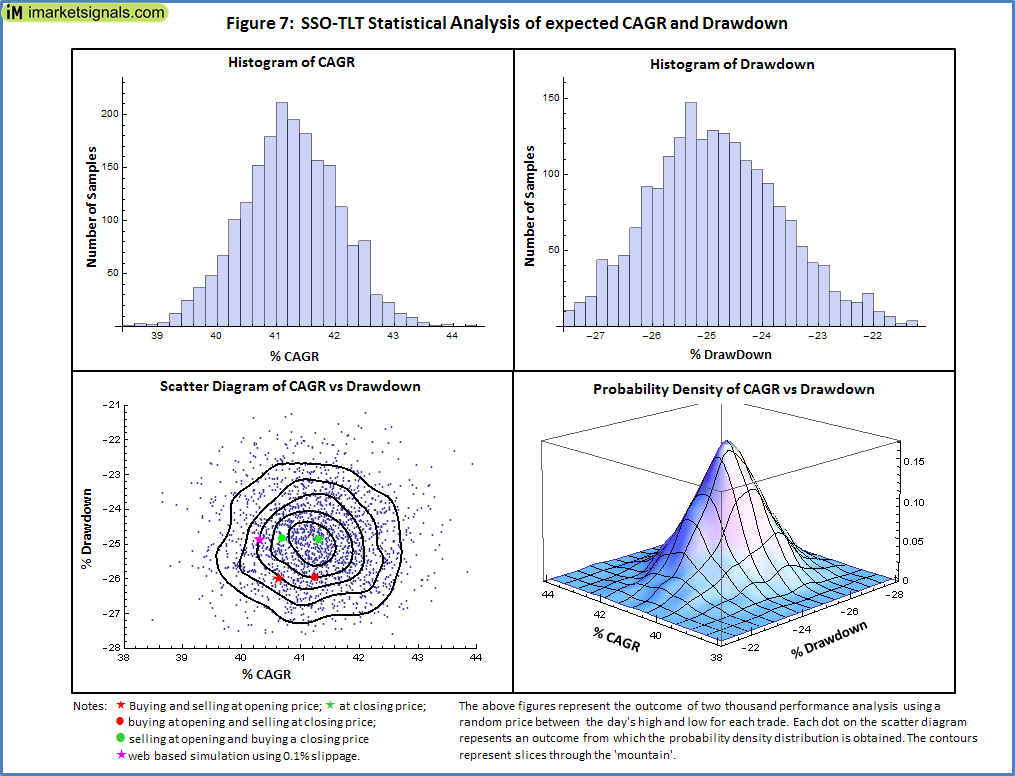 It is clear from above results that this model, if traded live, could have produced a CAGR of 41% with a drawdown of 25% if and only if traded within the last few minutes of the trading day. The expected variance in  performance, when trading at random times,  can be read from the above graphic.

Using other Treasury ETFs instead of TLT

Under certain circumstances returns can be improved by investing in low-beta bond ETFs (such as SHY or MBB) instead of the high beta TLT.  One can use the Bond Value Ratio model to determine whether to be in a low- or high-beta Treasury ETF when Best(SSO-TLT) produces a buy signal for TLT.  The shaded periods of Figure 8 indicate when the model was invested in a Treasury ETF.  Use TLT in up-bond-market periods and SHY in down-bond-market periods as indicated by the switch points of the BVR model. Our MS Excel simulation showed that by switching from TLT to SHY during the down-bond-market periods the average annual return of this model is increased by 1.05% and drawdown remained unaltered.

For example, since 9/27/2011 the BVR model suggests to switch to low beta Treasury ETFs.  The down-bond-market is clearly indicated by the declining BVR.  (The BVR model values are now out of sample for over 3 years.) 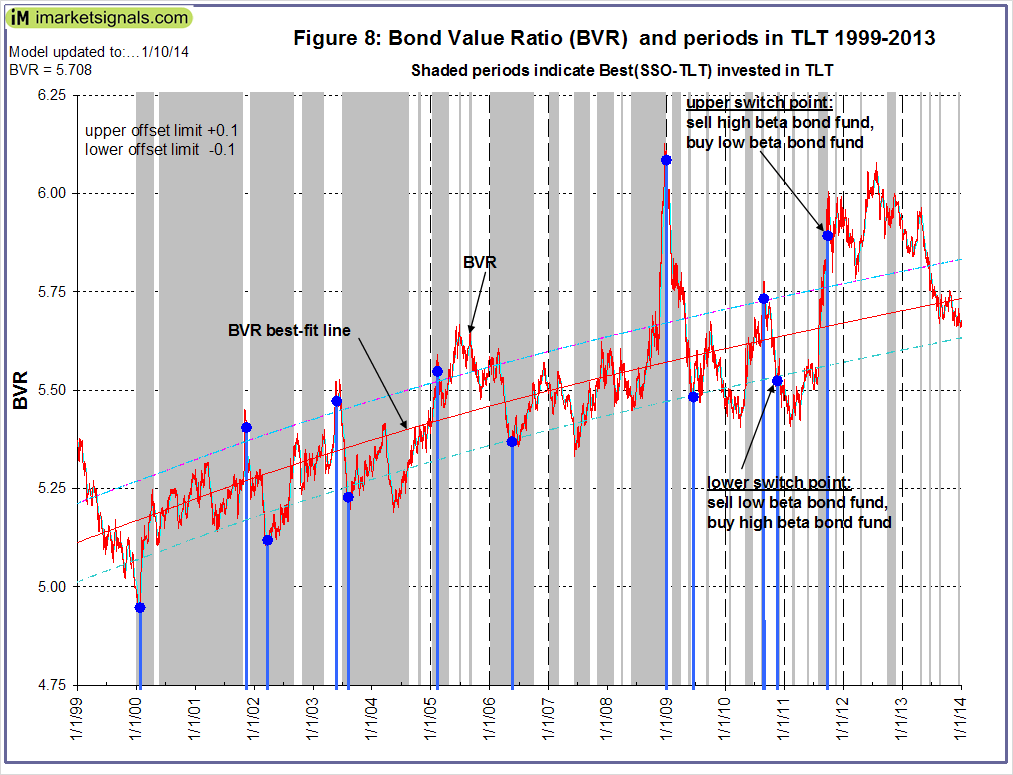 Note: Based on the simulated past performance one could expect this model to continue to perform well in the future as well. However, be aware that all performance results are hypothetical and the result of backtesting only. Out-of-sample performance may be much different. We can make no claims about future performance of this signal, which may include significant potential for losses. 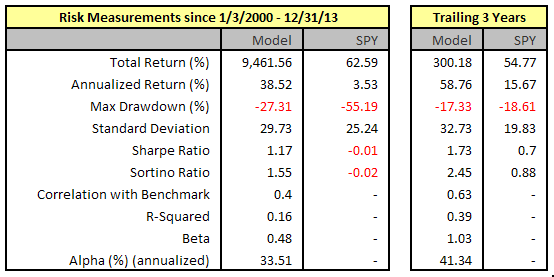 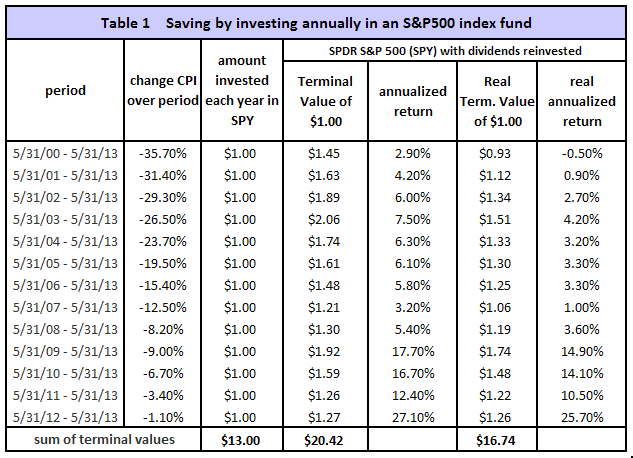 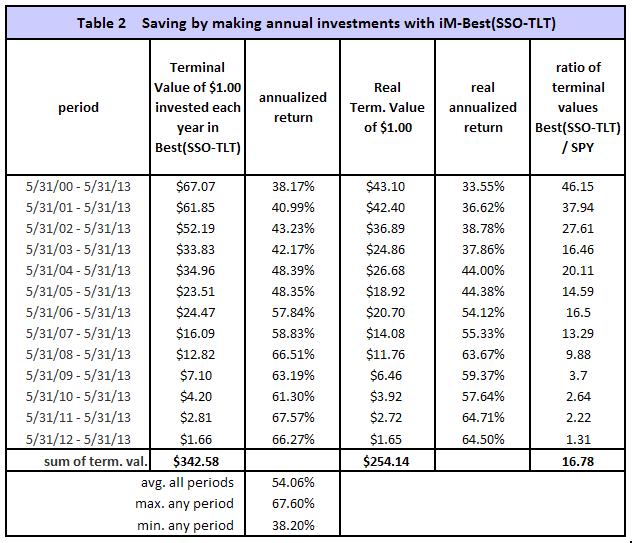 Posted on Jan 16, 2014 by Georg Vrba
← 47 Comments
With reference to Section 202(a)(11)(D) of the Investment Advisers Act: We are Engineers and not Investment Advisers, read more ... By the mere act of reading this page and navigating this site you acknowledge, agree to, and abide by the Terms of Use / Disclaimer