This model invests in highly liquid large-cap stocks selected from those making up the Russell 1000 Index which represents the large-cap segment of the U.S. equity universe.  When adverse stock market conditions exist the model reduces the size of the stock holdings by 50% and buys the -1x leveraged ProShares Short S&P500 ETF (SH).

Using a web-based stock trading simulation platform with our ranking system, and periodically rebalancing the portfolio to hold 9 of the highest ranked stocks would have produced survivorship biased free average annual returns of about 53% from Jan-2000 to end of Nov-2013.  Over any 1-year period, starting at any day from Jan-2000 to Nov-2012, the return would never have been less than 14.7%.  The model is appropriately named Best9(Russell1000) and is hereinafter referred to as Best9.

(An alternative to reducing the size of the stock holdings and buying SH is to sell short SPY.  This would have produced an average annual return of about 58% as shown in Figures 9 & 10 in Appendix D.)

Ranking System and Trading Rules are described in this article.  Additionally liquidity has been assured by stipulating that for a stock to be bought its average daily $-volume over the last 50 trading days must have been greater than $7-million.  The only sell rule is rank less than 97.

Figures 6 to 8 in Appendix C show comparison of performance when the following govern:

The model assumes stocks to be bought and sold at the next day’s opening price after weekly weekend rebalancing generates the signals for Monday.  Variable slippage accounting for brokerage fees and transaction slippage was taken into account.  Taxes were not considered.

The model was backtested from Jan-2-2000 onwards, as this was the first full year when the algorithm had access to all the required indicators.

Annualized returns for periods of 1 to 13 years were all higher than 32%, with the average being 52%; they are listed in Table 2 in Appendix A.

The model assumes an initial investment of $20,000 on Jan-2,2000.  It normally holds no more than 9 stocks.  To November 29, 2013 there were 1346 trades completed, 939 of these were winners and 407 losers as summarized in the tables below.  The amounts shown include transaction fees of $457,425 arising from slippage and brokerage commission. 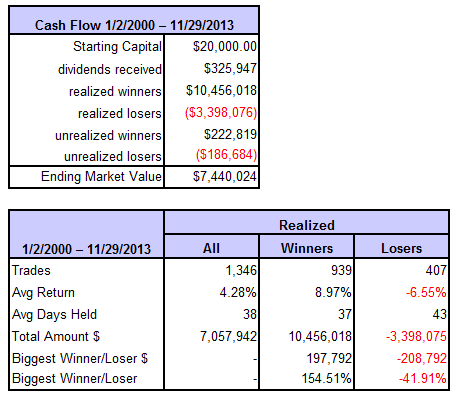 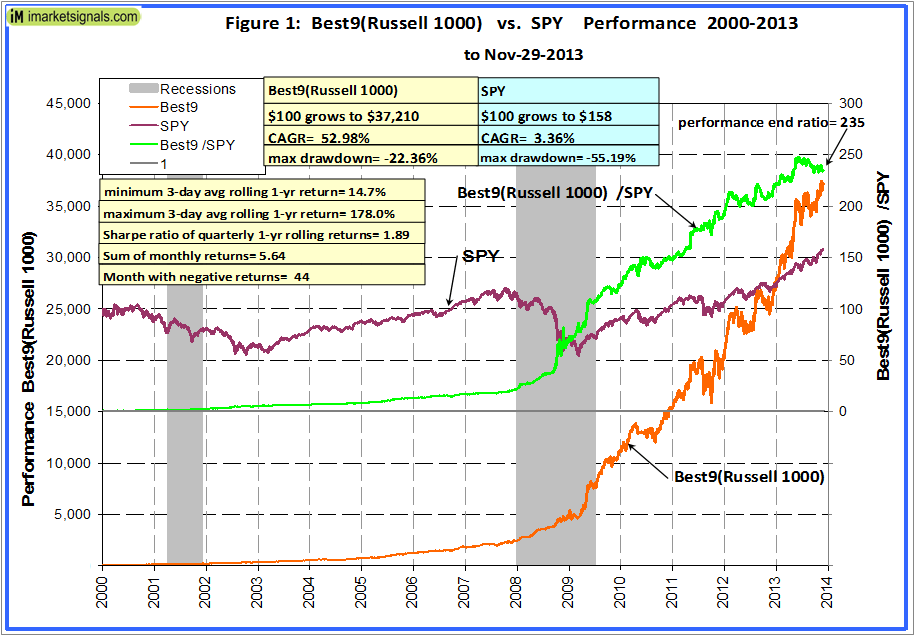 In above graph, the green line is the ratio of the Best9 to SPY, the general rising trend of that graph indicating that the Best9 continuously outperformed SPY over longer periods; to end of Nov-2013 it produced 235 times the value which one would have had from a Jan-2000 buy and hold investment in the SPY.  Note, that over shorter periods the model had sometimes underperformed relative to SPY, which is indicated by the segments of the green graph with negative slopes. 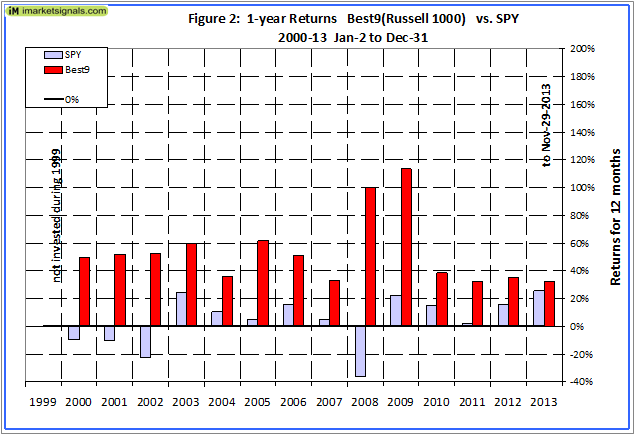 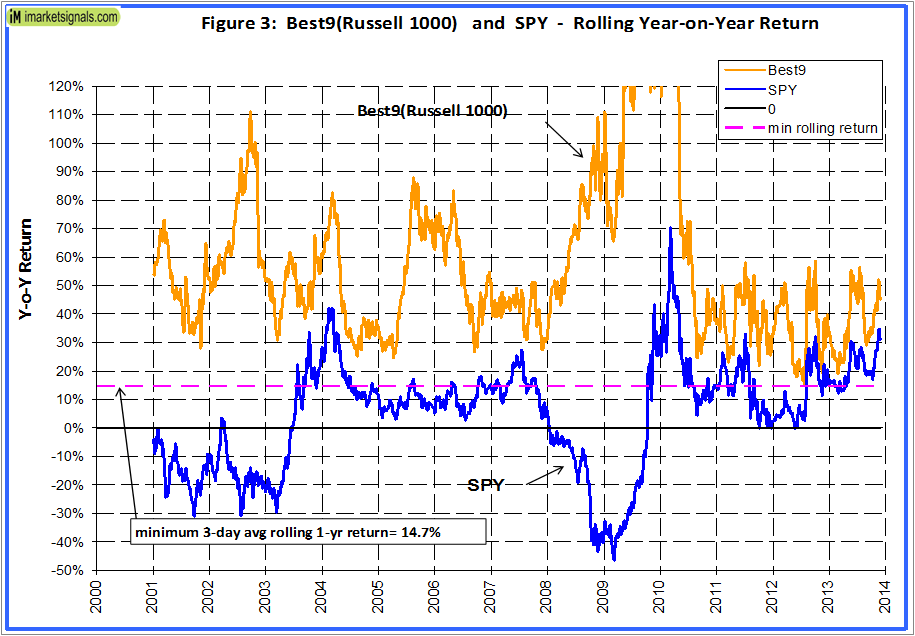 Figure 3 shows the 3-day average rolling 1-year returns starting each day from 2000 to 2012. There was never a loss over any 1-year period. The minimum return over 1 year was 14.7% and the maximum was 178%.  One can see that Best9 always outperformed SPY over a 12 months period, which is indicated by the golden graph never being below  the blue graph at any time.  For rolling 1-year returns starting every 3 months the Sharpe ratio was a reasonably high 1.9, indicating that the returns were of similar magnitude. 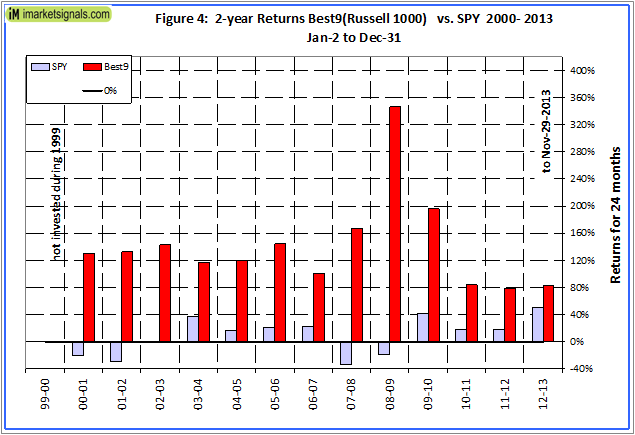 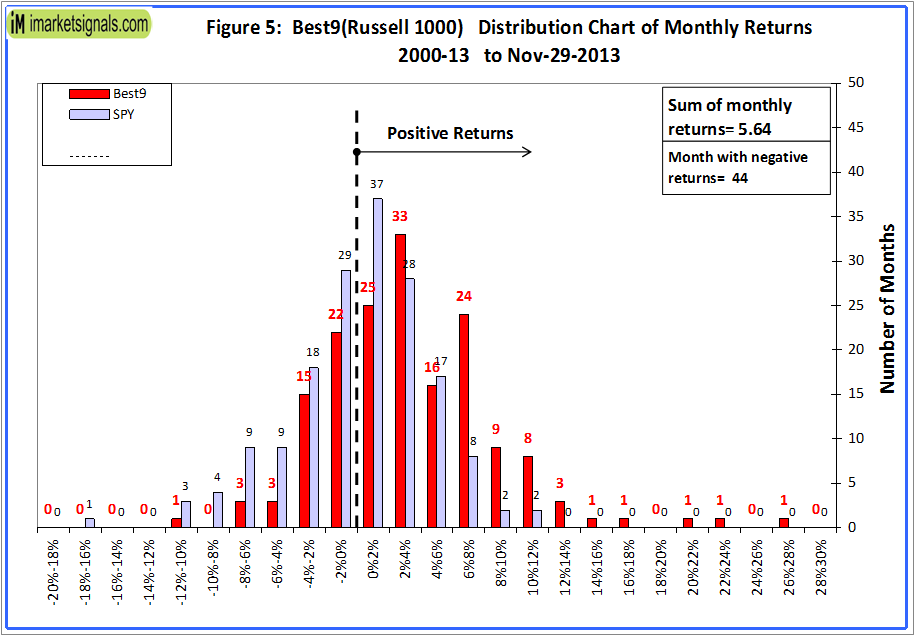 To simulate savings over time, terminal values were calculated to the end of May 2013 for annual hypothetical investments of $1. Starting with a dollar during each of the 13 years from 2000 to 2012, one would have invested a total of $13 cumulatively by the end. Summing the 13 terminal values, this strategy would have netted this dollar-per-year investor $875 at the end of 13 years.

Correlation with other “Best” models

The correlation between Best9 with Best10 and Best8+ is a high 0.76 and 0.75, respectively, with 1.0 signifying 100% correlation.  Therefore the signals from Best9 would produce many stock duplications of the stocks selected by the other two models.

As shown in Table 3 this portfolio management system made on average about 90 completed trades per year, resulting in an moderate average annual portfolio turnover of 825%.  This is equivalent to making 3 to 4 trades each week, not an unreasonable effort considering the good returns.

A simple ranking system with only 8 variables (which a sensitivity study showed to be very robust) is applied to the stock selection process.  This is this not a complex, high risk system with many parameters which could easily break down. Robustness is a function of the number of parameters in a model. It is well known that increasing the number of parameters in a model improves the goodness of the fit, but also makes the model less robust.  Simply put, the more rules a model has the more likely it is being curve fitted.  For example, the Akaike information criterion not only rewards goodness of fit (which would be maximum return in our case), but also includes a penalty that is an increasing function of the number of estimated parameters in a model.

The backtesting returns are not distorted by survivorship bias because the model uses a point-in-time database. Based on the past performance one could expect this model to continue to outperform in the future as well. However, please be aware that all performance results are hypothetical and the result of backtesting only. Out-of-sample performance may be much different.  We can make no claims about future performance of this signal, which may include significant potential for losses. 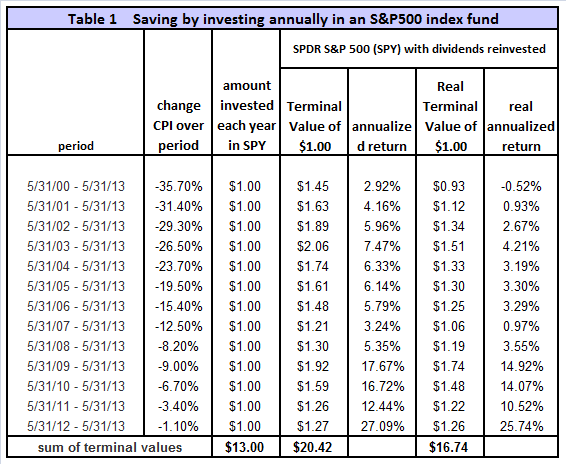 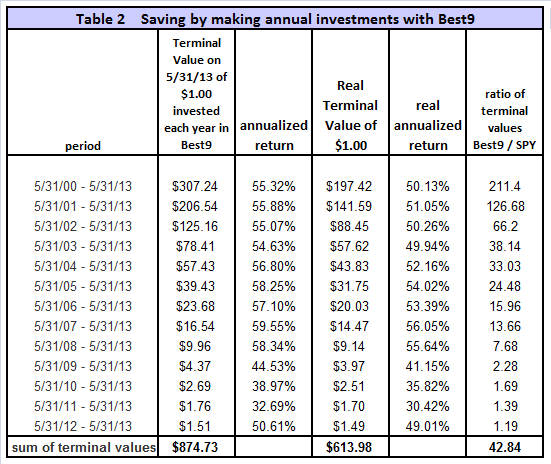 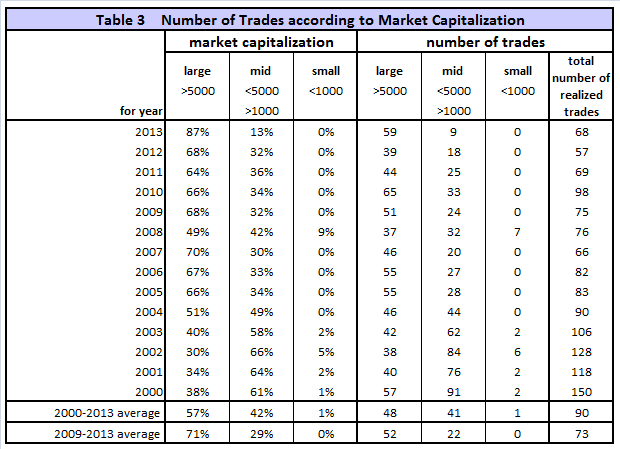 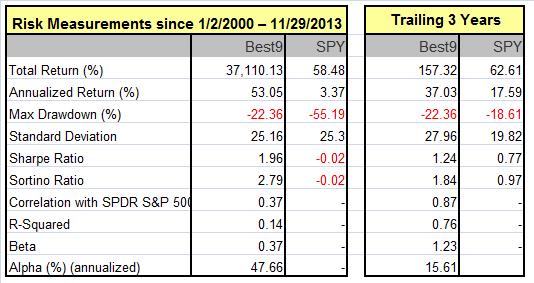 Table 3 in Appendix A shows the number of realized trades according to market capitalization.  One can see that over the last 5 years the model only bought stocks from large- and mid-cap companies.  The maximum portfolio size is dependent on the liquidity of the stocks in the model.  To calculate the maximum dollar-value of a portfolio without incurring too much slippage the following formula was recommended by P123:

Thus, this model could accommodate a good number of individual investors and  also professional fund managers. 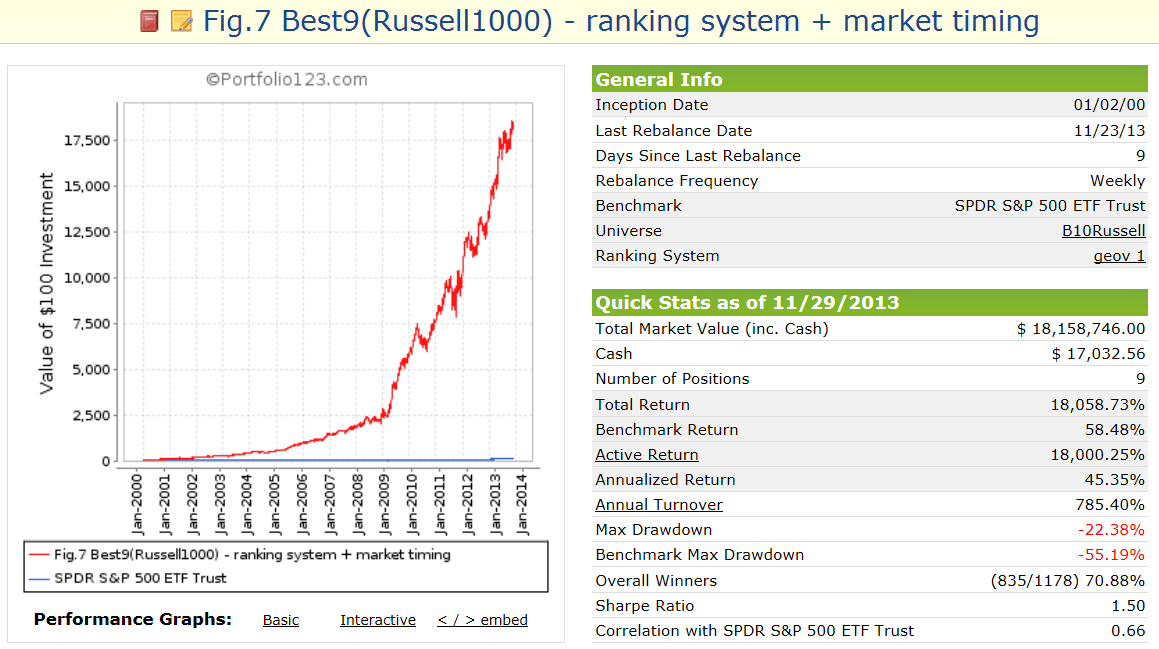 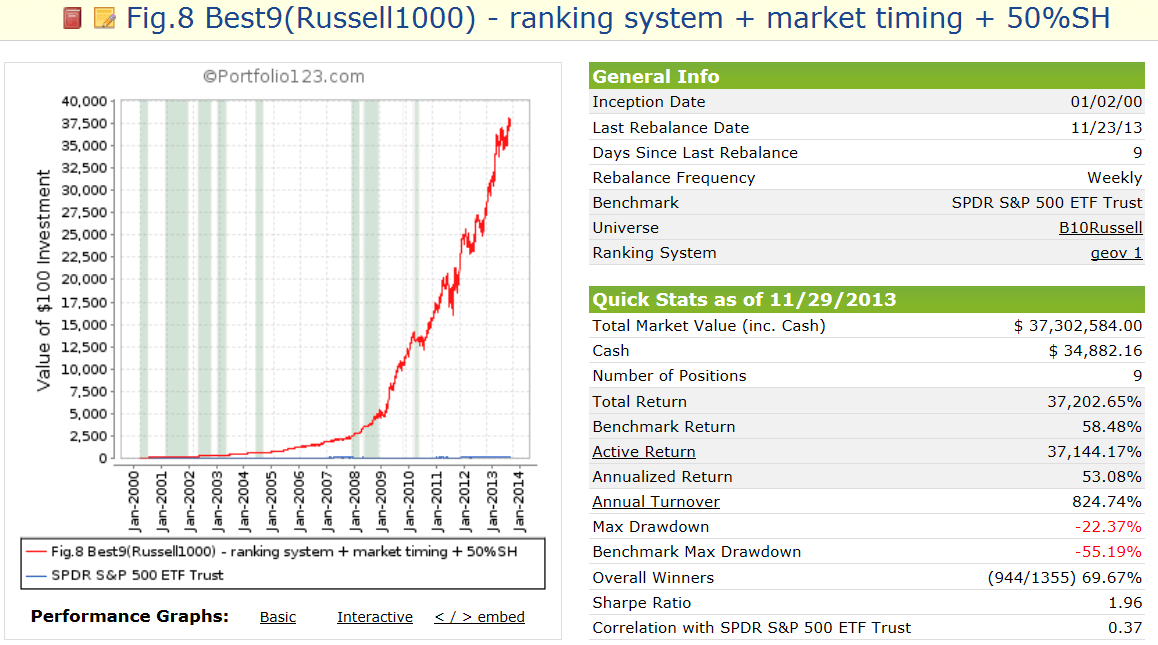 The vertical shaded stripes indicate when the model reduced the size of the stock holdings by 50% to buy SH, which occurred 8 times from 2000-2013. 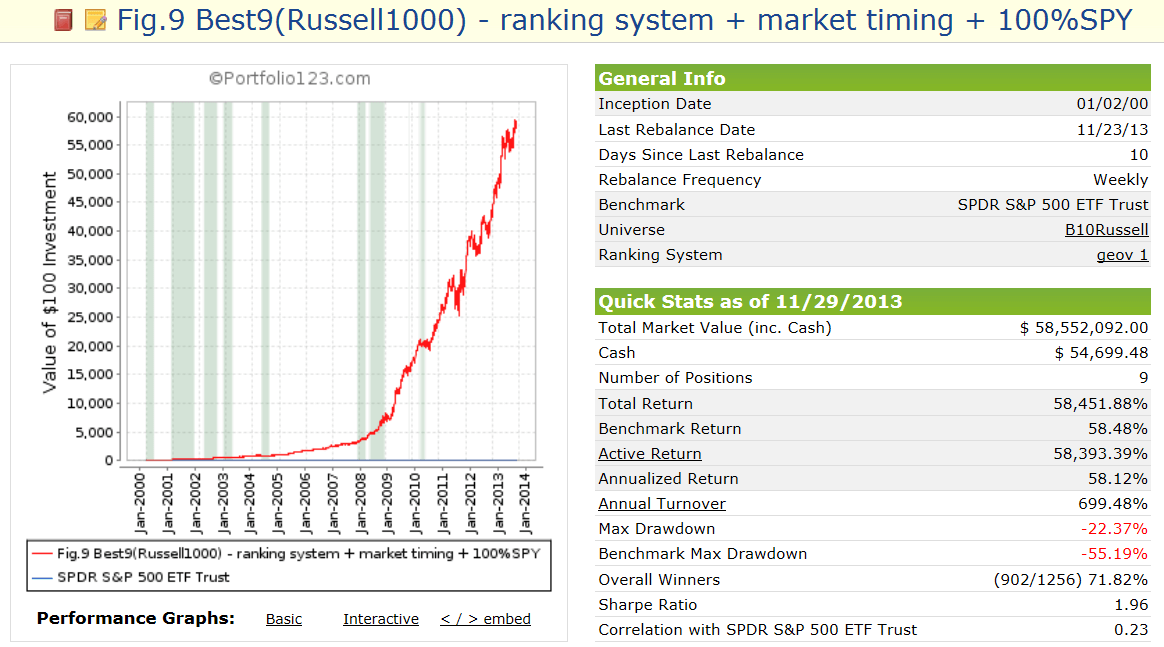 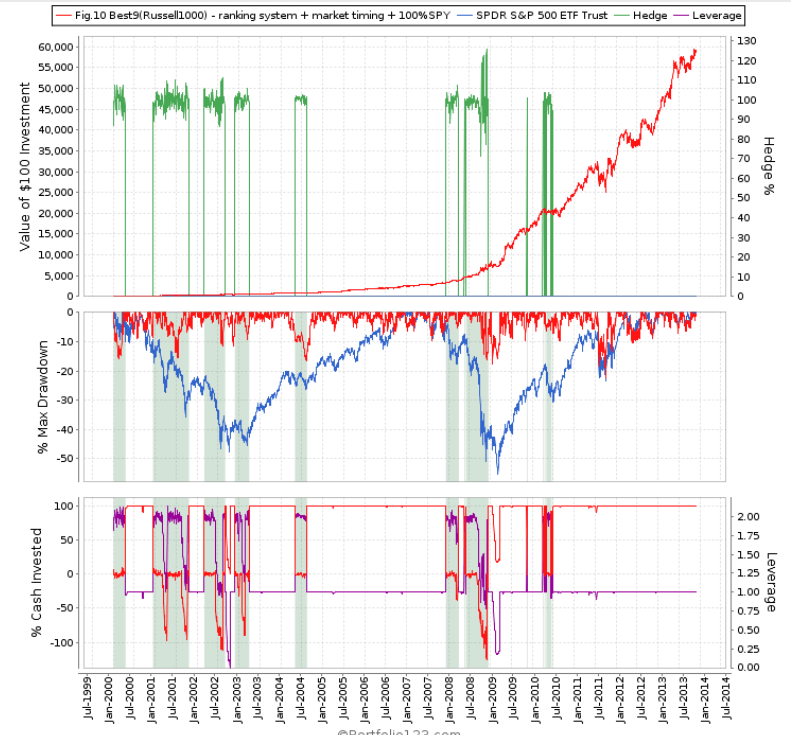 Posted on Dec 3, 2013 by Georg Vrba
← 23 Comments
With reference to Section 202(a)(11)(D) of the Investment Advisers Act: We are Engineers and not Investment Advisers, read more ... By the mere act of reading this page and navigating this site you acknowledge, agree to, and abide by the Terms of Use / Disclaimer