Minimum volatility ETFs should provide exposure to stocks with potentially less risk. They track indexes that try to capture the broad equity market with a reduced amount of volatility, seeking to benefit from what is known as low-volatility anomaly. Consequently they should show reduced losses during declining markets, but also reduced gains during rising markets. However, better returns with simultaneous tax efficiency can be obtained also during rising markets by selecting a number of the highest ranked stocks of a minimum volatility ETF and holding those positions for at least one year before new trades are initiated.

One of the largest minimum volatility funds is the iShares MSCI USA Minimum Volatility ETF USMV which provided an annualized return of 17.75% from inception Oct-20-2011 to Jun-18-2014, whereas SPY, the ETF tracking the S&P500, had a higher return of 22.06% over the same period. USMV’s lower performance did not deterred its growth, as evidenced by the fund’s current net assets of about $2.7-billion. Investors seem to assume that they are incurring less risk by investing in this fund and that any potential downside will also be lower relative to the broader equity market, just as the upside has been so far.

USMV tracks the hypothetical investment results of the MSCI USA Minimum Volatility (USD) Index. The parameters for this index are not publicly available, making it impossible to reconstruct a similar index to verify historic performance. The best one can do is to use the current holdings of USMV for backtesting. The backtest results should not be significantly affected by survivorship bias, because the fund’s annual portfolio turnover rate is low and the backtest period is relatively short.

USMV currently holds 150 large-cap stocks (market cap ranging from $4- to $445-billion) of which 148 were listed at the inception of the fund on Oct-20-2011. Using these stocks as the universe, backtests were performed on an online portfolio simulation platform assuming an initial investment of $100,000:

Results of backtest A with all the stocks of USMV holdings:

Had one at inception invested equal weight in all the stocks and applied the same expense ratio as for USVM, then to Mar-31-2014 the annualized return would have been 19.9%. Over the same period USMV produced 17.9% according to the fund’s fact sheet. The 2% higher annualized return of the simulation can be attributed to backtesting with an equal weighted universe, whereas the fund has weighted holdings. (Similarly, annualized return from equal weight ETF RSP for this period was 23.08% versus 21.03% for SPY.) The results confirm that using the current holdings for the entire backtest period is a legitimate technique when backtesting over shorter periods.

In the figures below the red graph represents the model and the blue graph shows the performance of benchmark SPY, the ETF tracking the S&P500. 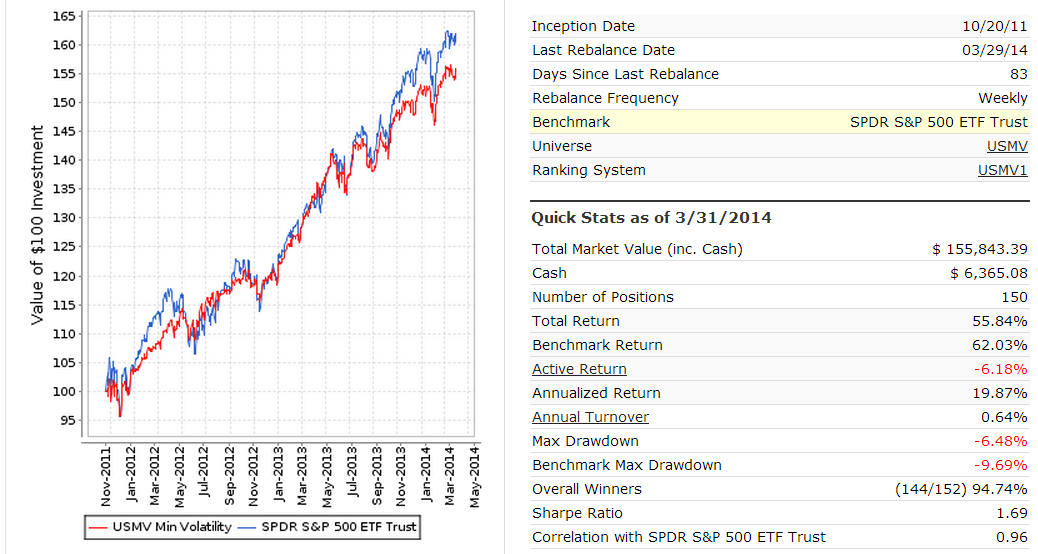 Results for backtest B with selected stocks from USMV holdings:

Had one at inception invested equal weight in the 12 highest ranked stocks and applied the buy/sell rules, then to March 31, 2014 the annualized return would have been 34.6 %. Allowance was made for an expense ratio of 0.15% as applied by the fund and slippage of 0.1% of the transaction price when stocks were bought and sold.

This strategy would have provided much higher returns than SPY and USMV, and shows that minimum volatility stocks can outperform the broader market also during up-market periods. 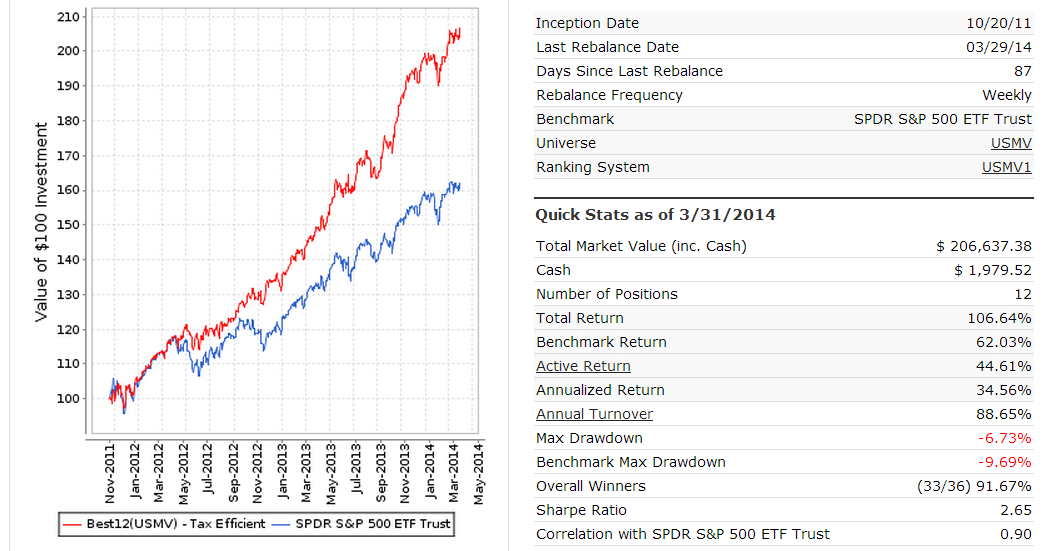 Using a ranking system to rank the stock holdings of USMV and only investing periodically in the 12 highest ranked stocks according to the buy/sell rules would have produced the best returns, as demonstrated by the results for backtests B. The performance from 2011 to 2014 is shown in Figure-1 together with the sector allocation of current holdings. One can see that the model’s holdings are well diversified.

Also the model’s annual portfolio turnover rate is only 82% because of the specified minimum one year holding period, making most of the returns subject to long-term capital gains tax only.

The combined holdings at the end consisted of 48 positions of which 23 stocks were represented once, 2 were represented twice, and 7 were represented 3 times. Thus there were 32 different stocks in the holdings with only a 28% overlap between the four models. Using four displaced models provides the ability to stage one’s investments over a year with trades occurring approximately ever 3 months thereafter.

Although more than 20% of USMV’s 150 holdings are held by the four models, the combination still showed a 31.6% annualized return, almost twice the 17.8% return of the ETF. A shadow ETF consisting of four displaced models could accommodate about 20% of USMV’s assets, and should at the same time produce significantly higher returns than USMV.

As demonstrated, a 12-stock model should significantly outperform USMV and SPY. At our website one can follow the performance of this model from July onward. We aim to update the model weekly and every three months renew the stock universe corresponding to the then current holdings of USMV. Additionally, we are planning to add another three similar models, quarterly displaced, to provide the ability to track the performance of staged investments over an extended period.

Posted on Jun 26, 2014 by Georg Vrba
← 54 Comments
With reference to Section 202(a)(11)(D) of the Investment Advisers Act: We are Engineers and not Investment Advisers, read more ... By the mere act of reading this page and navigating this site you acknowledge, agree to, and abide by the Terms of Use / Disclaimer