Our first market timing system uses SPY (the ETF tracking the S&P 500) to generate trading signals for the stock market. This is a binary model, it either holds SPY or cash. We refined this model to iM-Best(SPY-SH) which switches to SH during adverse market conditions. However, we kept the Best(SPY) R2G model on P123 as one could deduct the holding as described below. Since mid October, 2013 the holding column was removed by P123 – thus this model serves no further purpose.

This market timing system uses SPY (the ETF tracking the S&P 500) to generate trading signals for the stock market.  This is a binary model – either IN or OUT of the market.

It has been backtested from Jan-2-1999 to Aug-15-2013 on a web-based portfolio simulation site and would have provided a high annualized average return of 14.3% with a max drawdown of only -14.8%.  A continuous investment in SPY gave only 3.9%, with a much higher drawdown of -55.2%.  The performance without trading costs is shown in Figure 1.

Also this model was 52.2% of the time in cash, 2,796 days out of 5,340, and one would have earned additional interest during this time. Assuming one had invested in a GNMA fund during the cash periods, then annualized average return would have been 17.0% with a max drawdown of only -14.8%. Figures 1a shows the results with the added returns from the GNMA fund.

The model is rebalanced weekly.  Buy signals are only allowed to occur 1 week after a sell signals.  The buy rule uses volatility, risk premium, earnings estimates together with moving average cross-overs and includes the following parameters:

The sell rule is based on moving average cross-overs of SPY, with a minimum holding period of 7 weeks specified after a position was first opened.

This model identifies entry- and exit times for the stock market.  We are not advocating trading only SPY, because there are better returns to be had using other ETFs when following the signals from this model.  For example, had one used SPY from 1999 to May 2003 and then the ETF Equal Weight (RSP) when it became available, the annualized average return would have been 15.5% to Aug 2013, considerably higher than what SPY alone returned.

There were 15 buy signals which occurred 1 to 2 weeks after a sell signal, 9 of them with a lower buy price than the previous sell price.  This short period between sell and buy may be a problem if one wanted to apply the signals to retirement accounts where one could possibly invest only in one index fund.  It would therefore be advantageous to be with a company offering several large-cap index funds.  So if a buy signal from the model falls within the typical 60 day waiting period to enter a fund again after one had previously exited it, one could simply invests in one of the other available funds when a buy signal occurs shortly after a sell signal. 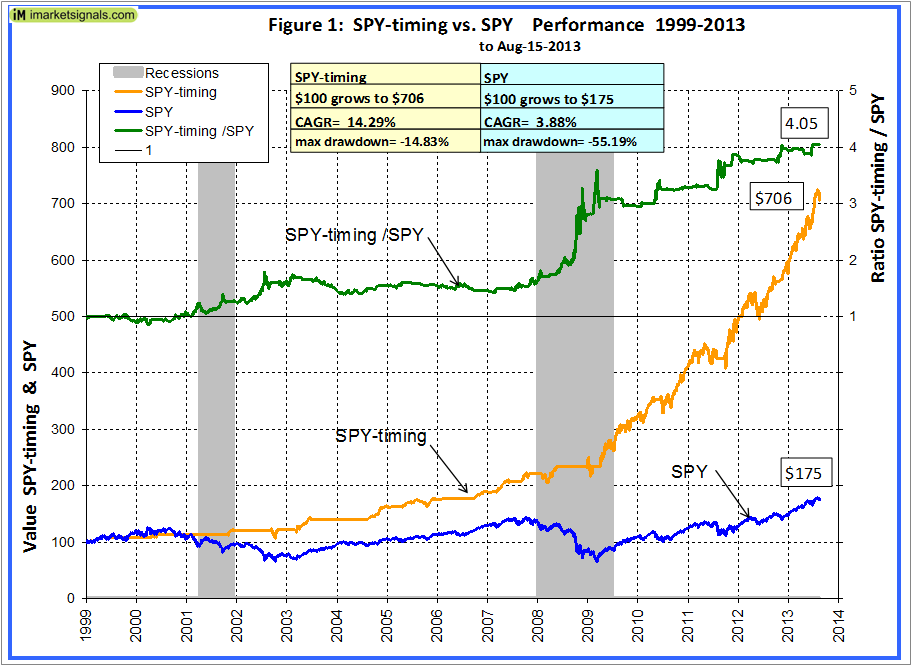 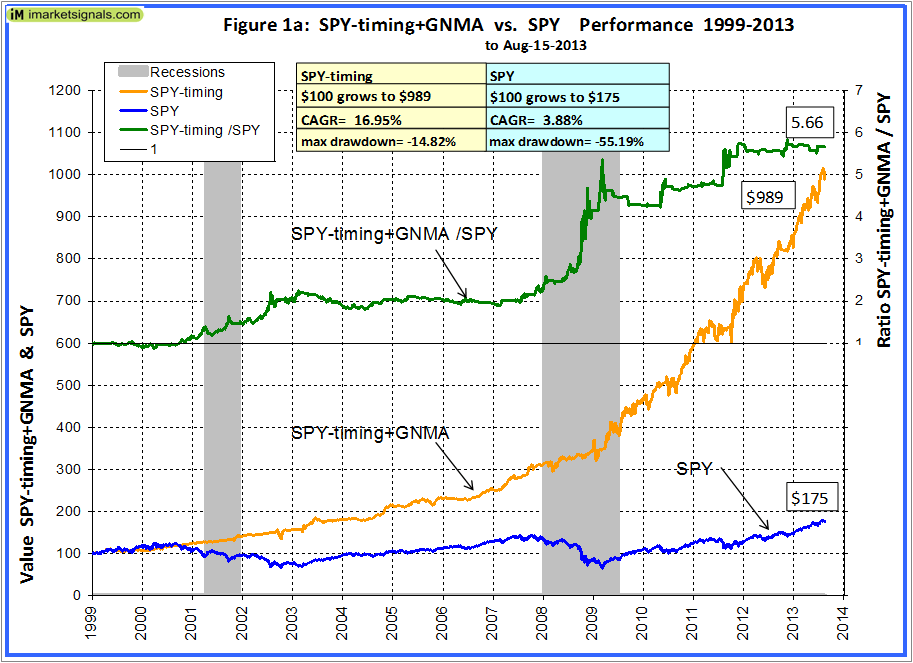 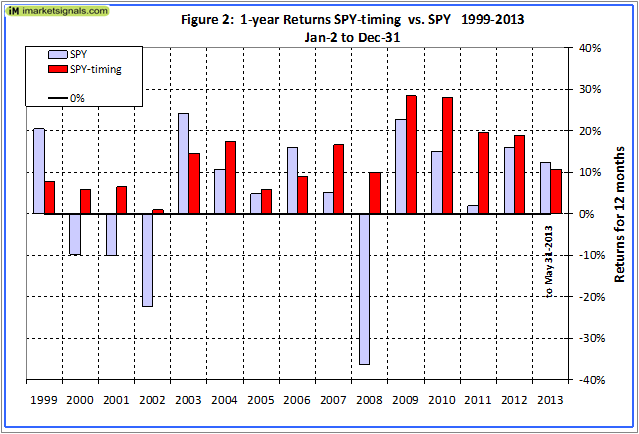 Figure 3 shows the rolling 1-year returns starting each day from 1999 to 2012. There were a few periods when the model produced a small negative return. The minimum return over one year was -7.2% and the maximum was 51.3%. 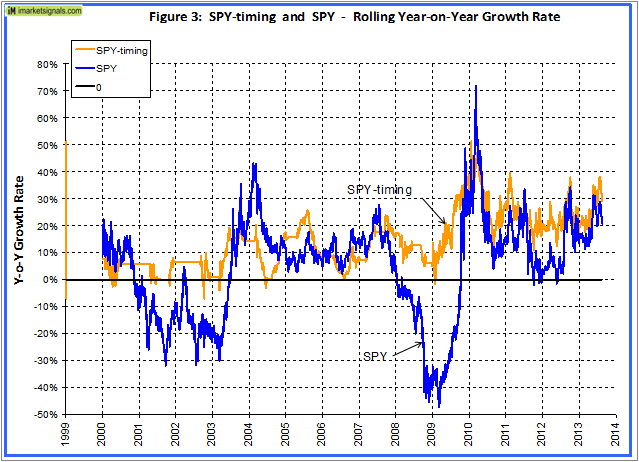 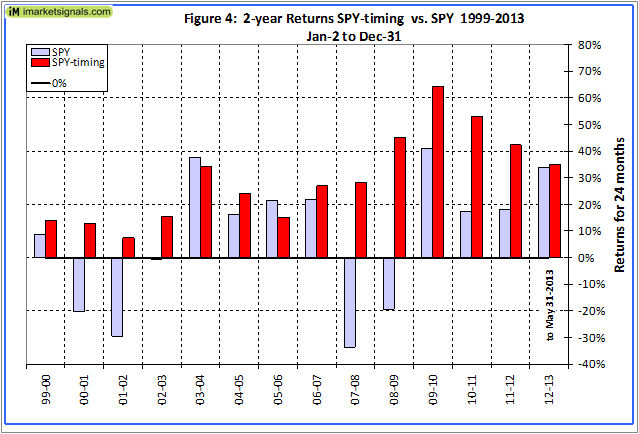 To simulate savings over time, terminal values were calculated to the end of May 2013 for annual hypothetical investments of $1. Starting with a dollar during each of the 14 years from 1999 to 2012, one would have invested a total of $14 cumulatively by the end. Summing the 14 terminal values, this strategy would have netted this dollar-per-year investor $53.66 at the end of 14 years.

Following a buy-and-hold strategy in SPY, one would have only $22, about 41% of what SPY-timing provided. Furthermore, the lowest annualized return, for any of the 14 time periods was 13.9% and the average for all the periods was 20.1%. This is shown in Table 1. 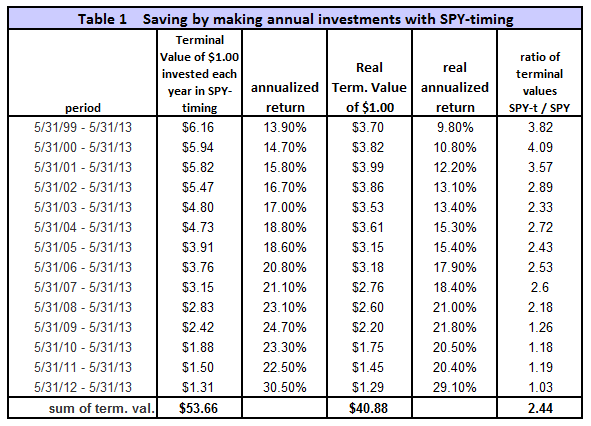 A list of all trades is in Table 2, furthermore trades where the buy was at a lower value than the previous sell are marked with an ‘L’. 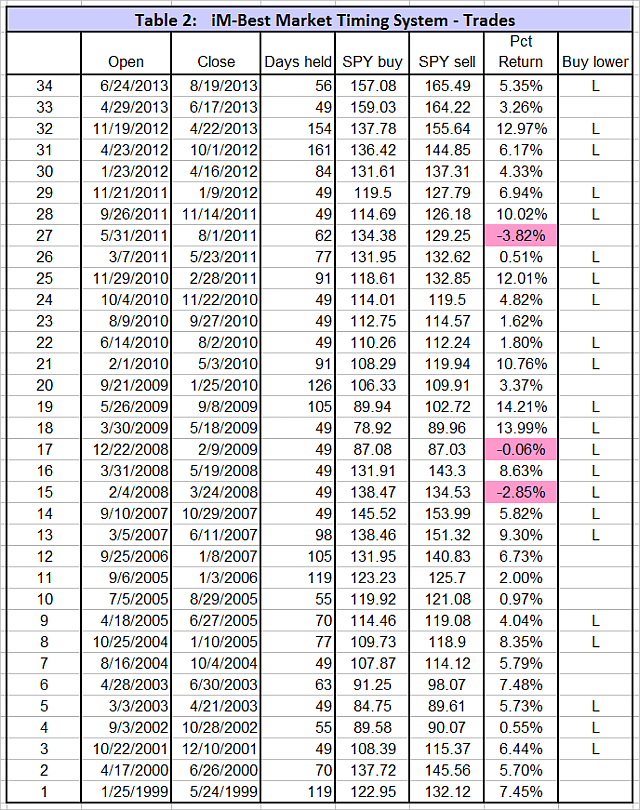 Posted on Aug 18, 2013 by Georg Vrba
← 19 Comments
With reference to Section 202(a)(11)(D) of the Investment Advisers Act: We are Engineers and not Investment Advisers, read more ... By the mere act of reading this page and navigating this site you acknowledge, agree to, and abide by the Terms of Use / Disclaimer