Home › deprecated › (Deprecated) iM-Best(SPY-SH) Market Timing System: Gains for Up and Down Markets

(Deprecated) iM-Best(SPY-SH) Market Timing System: Gains for Up and Down Markets

This binary model switches between SPY (SPDR® S&P 500® ETF) and SH (ProShares Short S&P500 ETF) depending on market direction.  Using a web-based trading simulation platform, our ranking system, and specific buy and sell rules, this model would have produced an average annual return of about 27.7% from January 2000 to middle of August 2013, versus 2.8% for a buy-and-hold investment of SPY over the same period.  Had one not invested in SH but remained in cash without interest then one would have been 64% of the time in SPY and the average annualized return would have been about 16%.  This model is currently invested in SPY.

The trading rules use volatility, risk premium, earnings estimates together with moving average cross-overs and includes the following parameters:

Figure 1 shows graphs of all parameters used. The horizontal risk premium lines indicate whether the market is overvalued (RP<1), fairly valued or undervalued (RP>3) according to the Fed Model. 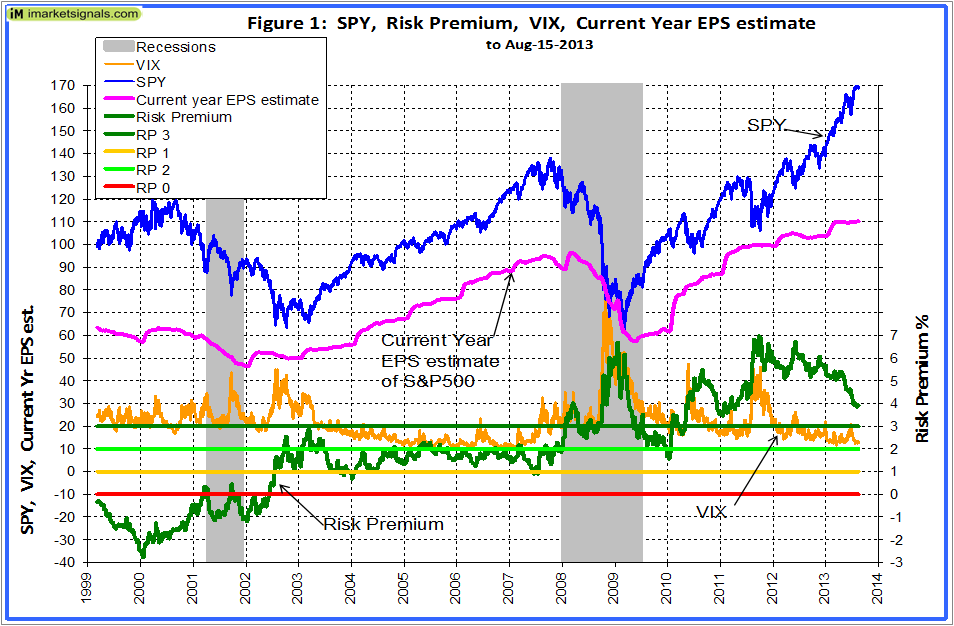 The model assumes an initial investment of $20,000 on Jan-3,2000.  It either holds SPY or SH, it is never in cash.  To August 15, 2013 there were 59 trades completed, 50 of these were winners and 9 losers, as summarized in the tables below, and listed in Table 3 in the Appendix.  The amounts shown include transaction fees of $9,366 arising from brokerage fees. 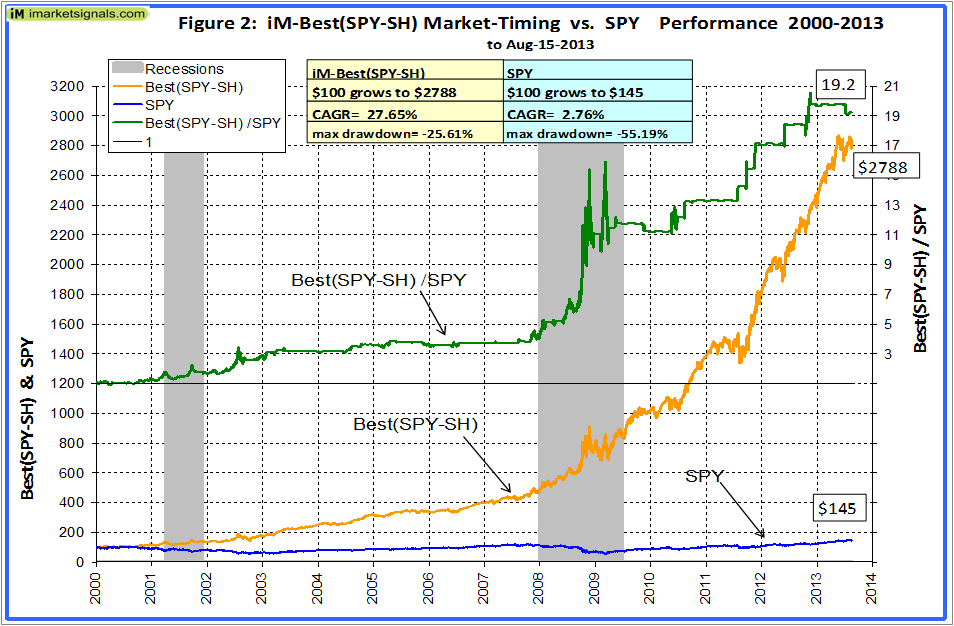 In above chart, the upper green graph is the ratio of the Best(SPY-SH) to SPY, the general rising trend of that graph indicates that the Best(SPY-SH) continuously outperformed SPY; it produced 19 times the value which one would have had from a buy-and-hold investment in SPY over the same period.  Even during the bull market period from 2009 onwards did this model out performed SPY.

Annual performance from January to December ranged from a maximum of  64% for 2008 to a minimum of 8% for 2005, as can be seen in Figure 3.  There was never a loss over those periods. 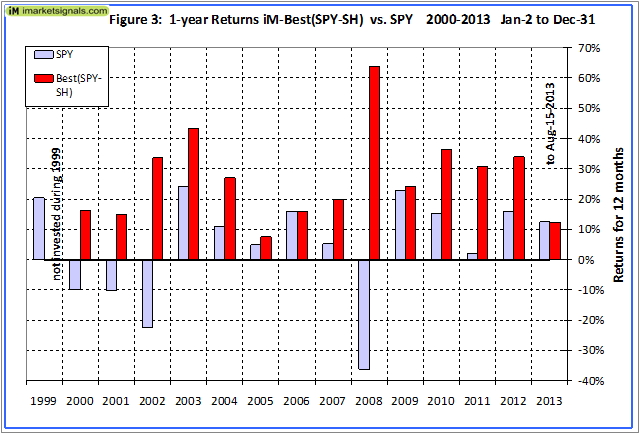 Figure 4 shows the  rolling 1-year returns starting each trading day from 2000 to 2012. There was never a significant loss over any 1-year period. The minimum return over 12 months was -1% and the maximum was 88%. 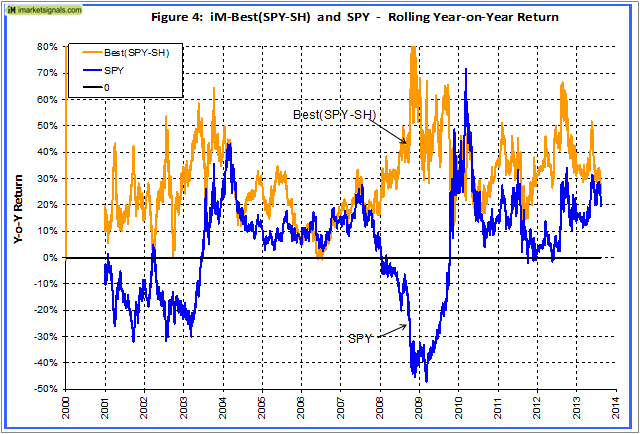 To simulate savings over time, terminal values were calculated to the end of May 2013 for annual hypothetical investments of $1. Starting with a dollar during each of the 13 years from 2000 to 2012, one would have invested a total of $13 cumulatively by the end. Summing the 13 terminal values, this strategy would have netted this dollar-per-year investor $131 at the end of 13 years.

Following a buy-and-hold strategy in SPY, one would have only $22, about 15.6% of what Best(SPY-SH) provided. Furthermore, the lowest annualized return, for any of the 14 time periods was 28.9% and the average for all the periods was 34%. This is shown in Table 1 and 2 in the Appendix.

This market timing system can not only be applied to trading the ETFs SPY and SH, but can also be used to time investments in stock index funds tracking the S&P 500.  Table 4 in the appendix lists only the investment periods when the model was in SPY, i.e. invested in the S&P 500.  This provided an approximate average annualized return of about 16% (with dividends) from the beginning of 2000 to August 2013, with 64% of the total time invested.  For the remaining 36% of the time one would have had additional income from a bond fund or from cash in a money market account.

More particulars can be found on our website’s “iM-Best Market Timing Systems” page, where this model with an inception date of 1/2/2009 will be updated weekly. 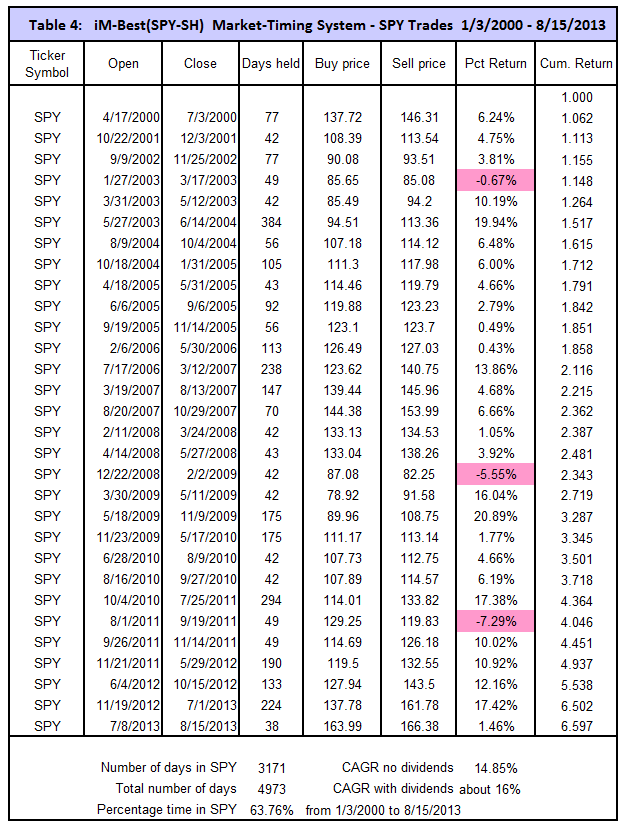 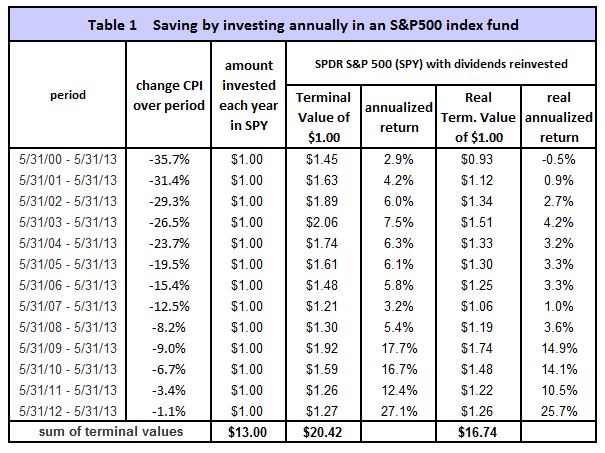 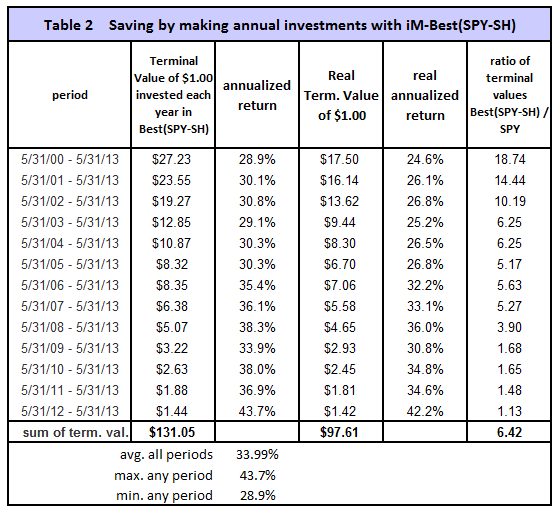 7 comments on “(Deprecated) iM-Best(SPY-SH) Market Timing System: Gains for Up and Down Markets”

Posted on Aug 30, 2013 by Georg Vrba
← 7 Comments
With reference to Section 202(a)(11)(D) of the Investment Advisers Act: We are Engineers and not Investment Advisers, read more ... By the mere act of reading this page and navigating this site you acknowledge, agree to, and abide by the Terms of Use / Disclaimer