Previously described market timing models (listed in Appendix-1) are used to determine the basic risk-on and risk-off periods for equities, similarly to what was described in the iM-Multi-Model Market Timer article.

if none of the above three options are true basic risk-off periods are indicated.

During risk-on and risk-off periods for equities one should consider inflation risk as well. Rising inflation means that interest rates are increasing and the discounted value of future cash flows from stocks is driven down, lowering equity prices.

We define rising inflation with data from the University of Michigan Inflation Expectation© series (MICH) and the 6-month moving average of the inflation rate as discussed in Evaluating Popular Asset Classes For Inflation Protection.

Typically, the Federal Funds Rate is near a high when the yield curve inverts, indicating the Federal Reserve’s activity in combating high inflation. An inverted yield curve signifies that economic activity is near the end of the expansion phase of a business cycle and that a high probability of an oncoming recession exists.

The following ETFs were used:

Note that the model never holds any leveraged ETFs.

The model was backtested using the online portfolio simulation platform Portfolio 123, which also provides extended price data for ETFs prior to their inception dates calculated from their proxies. Closing prices and trading costs of 0.05% of each trade amount were assumed in the backtest.

The simulation shows an annualized return of 39% with a maximum drawdown of -22% and only 169 realized trades (a listing of realized trades is in the Appendix-2). An initial investment of $100,000 would have grown to $160-million if one could have followed this model from January 2000 onwards. Total trading costs would have been $850,000. 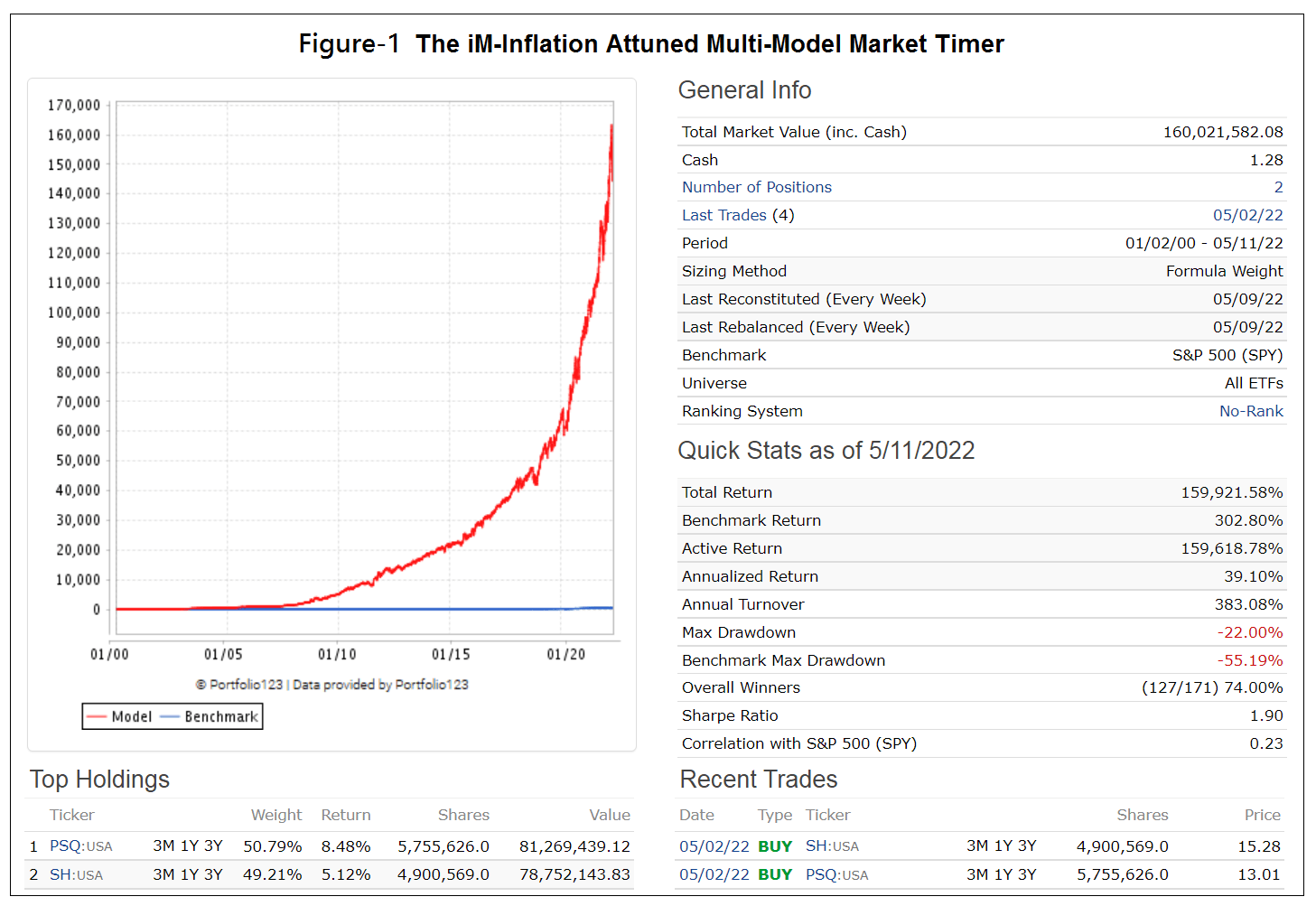 The risk statistics for the model relative to the benchmark ETF (SPY) show a positive alpha of 36%, indicating that this strategy would have outperformed its risk-adjusted benchmark return on average by 36% per year since January 2000. Additionally, the Standard Deviation for this model’s monthly returns is similar to that of SPY, indicating similar volatility and demonstrating that the model’s investment strategy should be a better alternative to buy-and-hold SPY over the longer term.

From the analysis it would appear that the Inflation Attuned Multi-Model Market Timer could profitably be used to switch between the specified ETF groups according to the signaled risk situation. This model’s calendar year returns ranged from a minimum of 11% in 2018 to a maximum of 152% in 2008. The model shows excess returns over benchmark SPY for each year, and there would never have been a year with negative returns.

At iMarketSignals we will report weekly the status of this timer. Gold subscription would be required.  The last trade, switching from risk-on & high-inflation to risk-off & high-inflation occurred on 5/2/2022, and current holdings are therefore SH and PSQ since then.

Although this model performed extremely well over 22 years, there is no guarantee that it will perform well in the future.

Note that Pct Return does not include dividends.

Posted on May 13, 2022 by Georg Vrba
← 29 Comments
With reference to Section 202(a)(11)(D) of the Investment Advisers Act: We are Engineers and not Investment Advisers, read more ... By the mere act of reading this page and navigating this site you acknowledge, agree to, and abide by the Terms of Use / Disclaimer