The Cyclically Adjusted Risk Premium As An Indicator of Market Risk

The S&P Risk Premium and below statement comes from Portfolio 123:

The premise is that if the expected earnings yield of the market is equal to or lower than what one can earn risk-free on a 10Y note, then it does not pay to hold stocks. Conversely if the S&P expected earnings yield is higher than the 10Y note yield, then investors are receiving a “Risk Premium” for taking the additional risk inherent in stocks.

A better indicator of stock market risk, although not a perfect one, is the Cyclically Adjusted Risk Premium (CARP). It is the inverse of the Shiller Cyclically Adjusted Price to Earnings Ratio (CAPE) expressed in percent minus the yield of the 10-year Treasury note. In January 2008 the CARP value was -0.3%, indicating risk-off asset allocation then, while the S&P Risk Premium signaled risk-on. 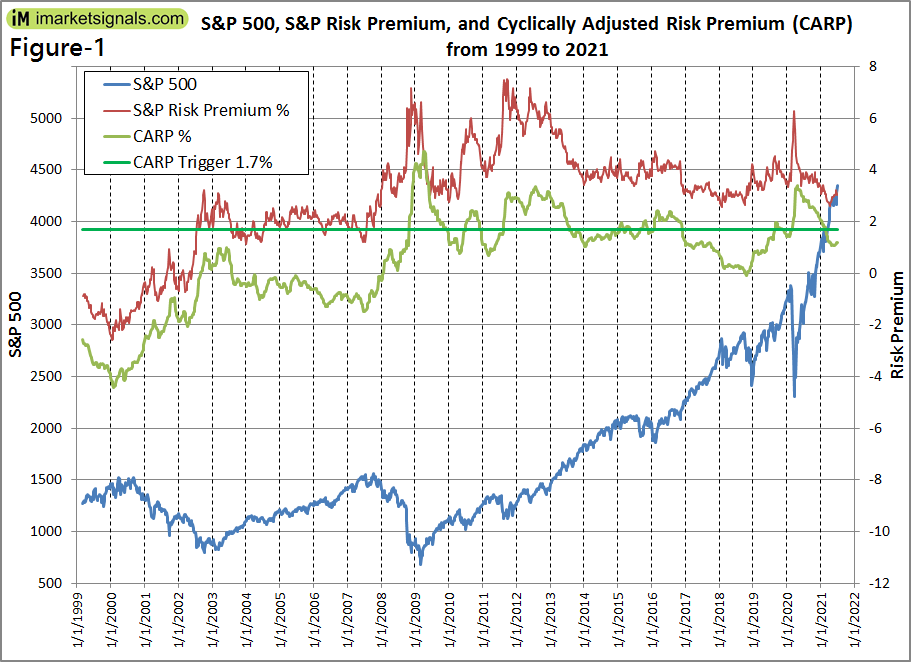 Since the CAPE is referenced to the current Consumer Price Index the inverse of the CAPE (earnings divided by price) is also expressed in today’s dollars and thus represents a current value.

Some minor smoothing is employed to calculate the value of the CARP by using the average of the two most recent monthly values of the CAPE and the median value over one month of the 10-year Treasury Yield.

From Figure-1 it is evident that from March 1999 to November 2008 the CARP was always lower than 1.7%, indicating a risk-off situation. The validity of this signal is confirmed by the historic performance of the 7-10 Year Treasury Bond ETF (IEF) which showed a total return of 76% over this period, versus a loss of -11% for the S&P 500 ETF (SPY).

Since the CARP on its own is not a very accurate market timer it is prudent to include stock- and bond ETFs in one’s investment assets. For this analysis the risk-off and risk-on assets consist of 50% equity- and 50% bond ETFs of different risk categories. The following ETFs were used:

(Note that this model uses HYG prior to the inception of JNK.)

The model was back-tested on the on-line simulation platform Portfolio123 which provides historical economic and financial data from January 1999 onward, as well as extended price data for many ETFs before their inception dates. Transaction costs of 0.05% of each trade amount were taken into account to determine the performance.

Transactions were specified to only occur on the first trading day of the first week of a month. There were only 52 completed trades; the minimum and average holding period for a position would have been 1 and 9 months, respectively. A table of the historic risk-off and risk-on periods since 1999 is in the appendix. 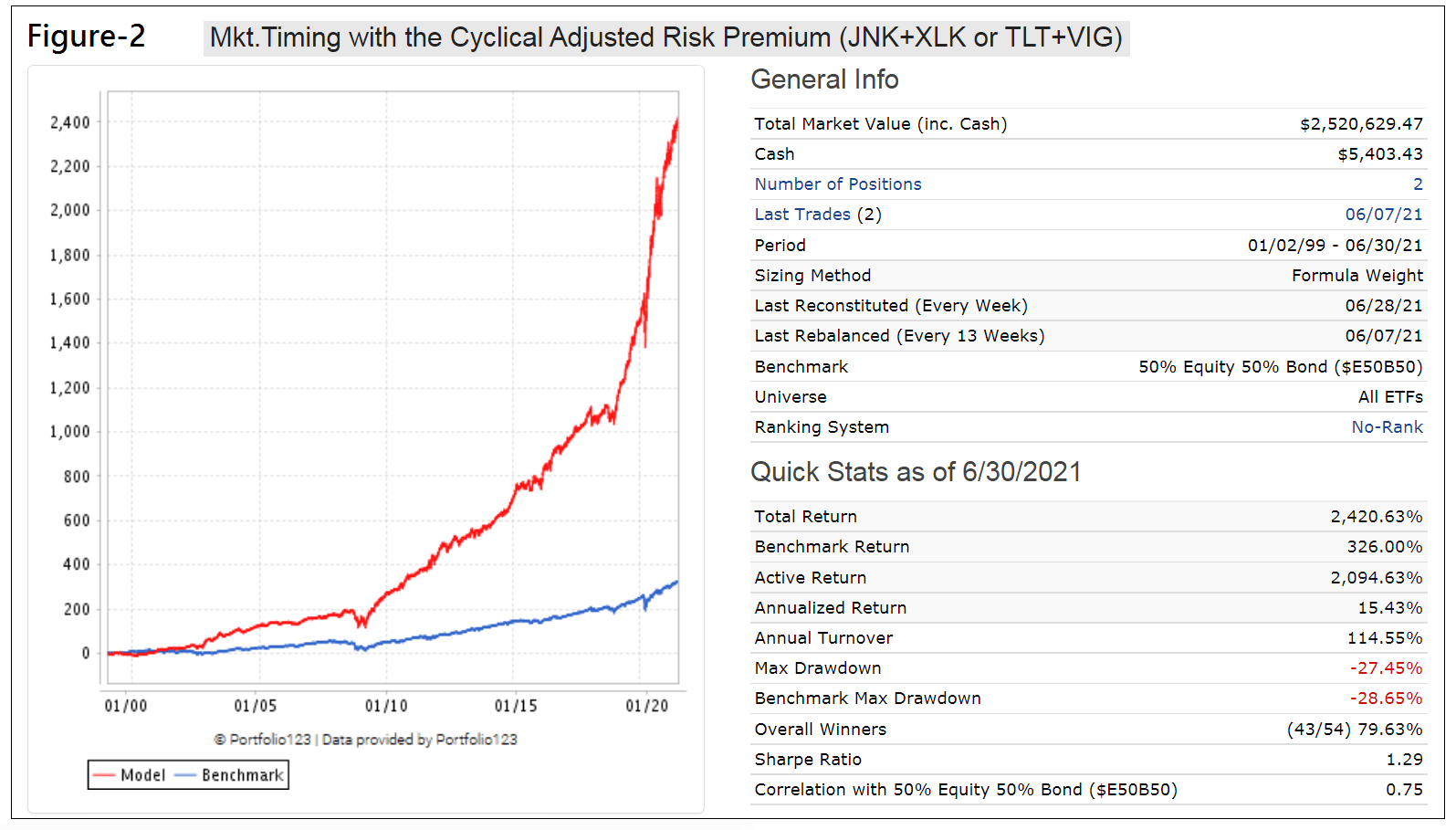 To see whether the CARP-Strategy would have worked prior to 1999 a simulation was performed in excel with the historic data of the Vanguard Long-Term Investment-Grade Fund (VWESX) and the S&P 500 Total Return index (SP500TR). 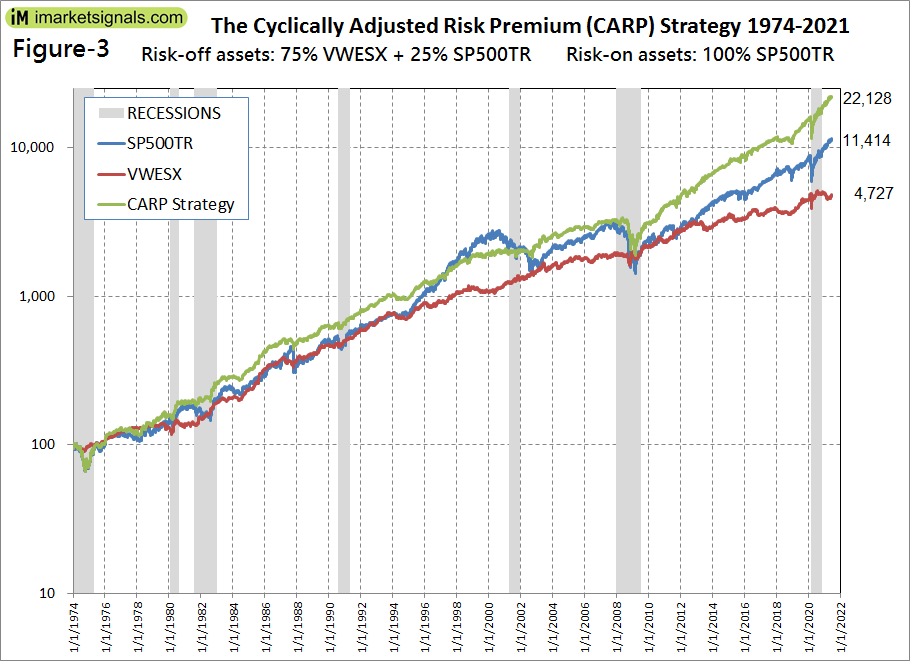 The long backtests from 1974 to 2021 confirms that over longer periods the CARP-Strategy would significantly outperform buy-and-hold the S&P 500 Total Return and also that of bonds. For a balanced model one has to decide on the composition of risk-off and risk-on assets, both of which should contain bond- and stock funds.

At iMarketSignals we will report weekly the current risk situation provided by this model.

Note: All performance results are hypothetical and the result of backtesting over the period 1974 to 2021. Since performance is dependent on market-timing rules, the future out-of-sample performance may be significantly less if those rules are not as effective as they were during the backtest period.

Posted on Jul 9, 2021 by Georg Vrba
← 6 Comments
With reference to Section 202(a)(11)(D) of the Investment Advisers Act: We are Engineers and not Investment Advisers, read more ... By the mere act of reading this page and navigating this site you acknowledge, agree to, and abide by the Terms of Use / Disclaimer