This timer signals switches from stocks (S&P500 Total Return) to gold and vice versa near or during recession periods.

Only three parameters are needed, the daily Effective Federal Funds Rate (EFFR), and the 5-day moving averages the 2-year and 10-year daily U.S. Treasury yields as measures of short-term and long-term rates.

where a is a constants a > 1, the purpose is to stop short term exit/entry signalling at the transition points.

The analysis was performed in excel from 1967 to 2020 using the timing rules listed above. This resulted in eight periods when the model was invested in gold and not in SPY*. In Figure-1 the starting and ending dates of the gold holding periods are marked by the vertical red and green lines, respectively.

For comparison, a buy-and-hold strategy of SPY* would have produced an annualized return of 9.65% with a maximum drawdown of -55.2%; or a starting capital of $100 would have grown to $14,379 over this period. 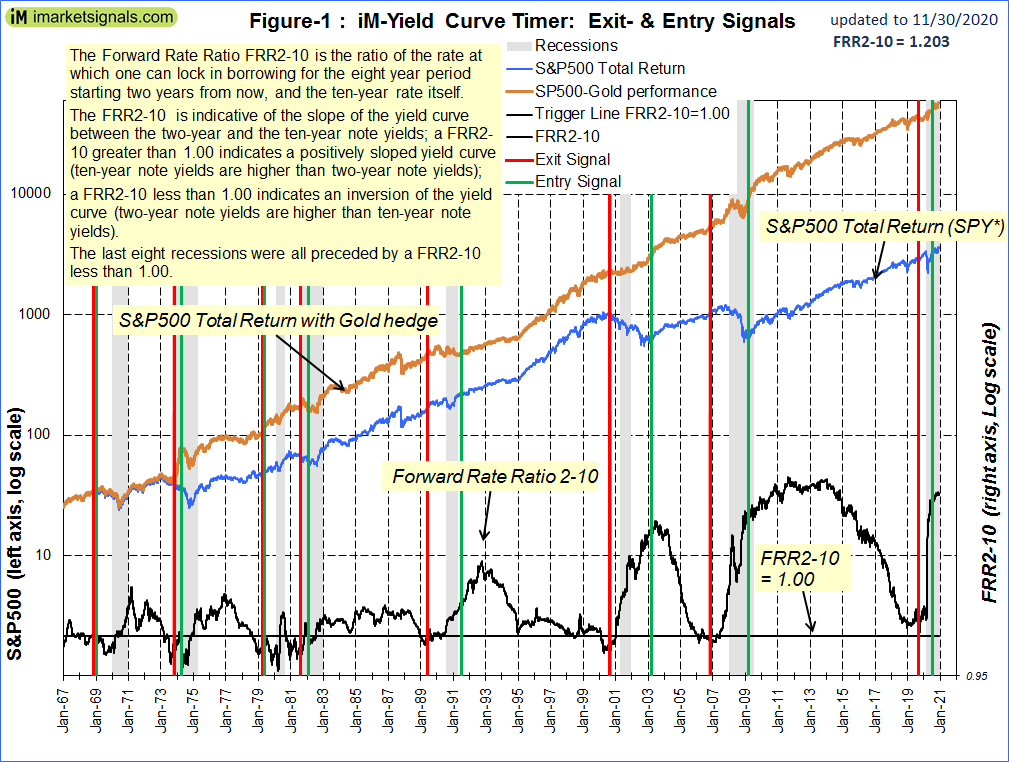 To validate the excel calculation the analysis was also performed on the on-line portfolio simulation platform Portfolio 123 (P123) which provides historic financial data for stocks, bonds and ETFs from 1999 onward.

The model’s timing rules can be written in P123 syntax and used in the hedge entry and exit rules of a simulation which uses all the cap-weighted 500 stocks of the S&P 500 index point-in-time.

The simulated performance of the S&P 500 Total Return Index with switches to gold is shown by the red plot in Figure-2, with the vertical grey bars indicating the periods when the model was in gold. The blue plot shows the performance of benchmark SPDR S&P 500 ETF (SPY).

The model’s cap-weighted stocks were rebalanced every 13 weeks (similar to the methodology used by the index provider) and switches to the SPDR Gold Trust ETF (GLD) according to the timer’s signals. Neglecting management fees and trading costs, the annualized return over the period 1/02/99 – 12/17/20 would have been 17.7% with a maximum drawdown of -29.4%, versus a return of 7.1% for the SPDR S&P 500 ETF (SPY) with a maximum drawdown of -55.2%. (Switching between ETFs SPY and GLD would have produced a marginally lower annualized return of 17.4% over this period.) 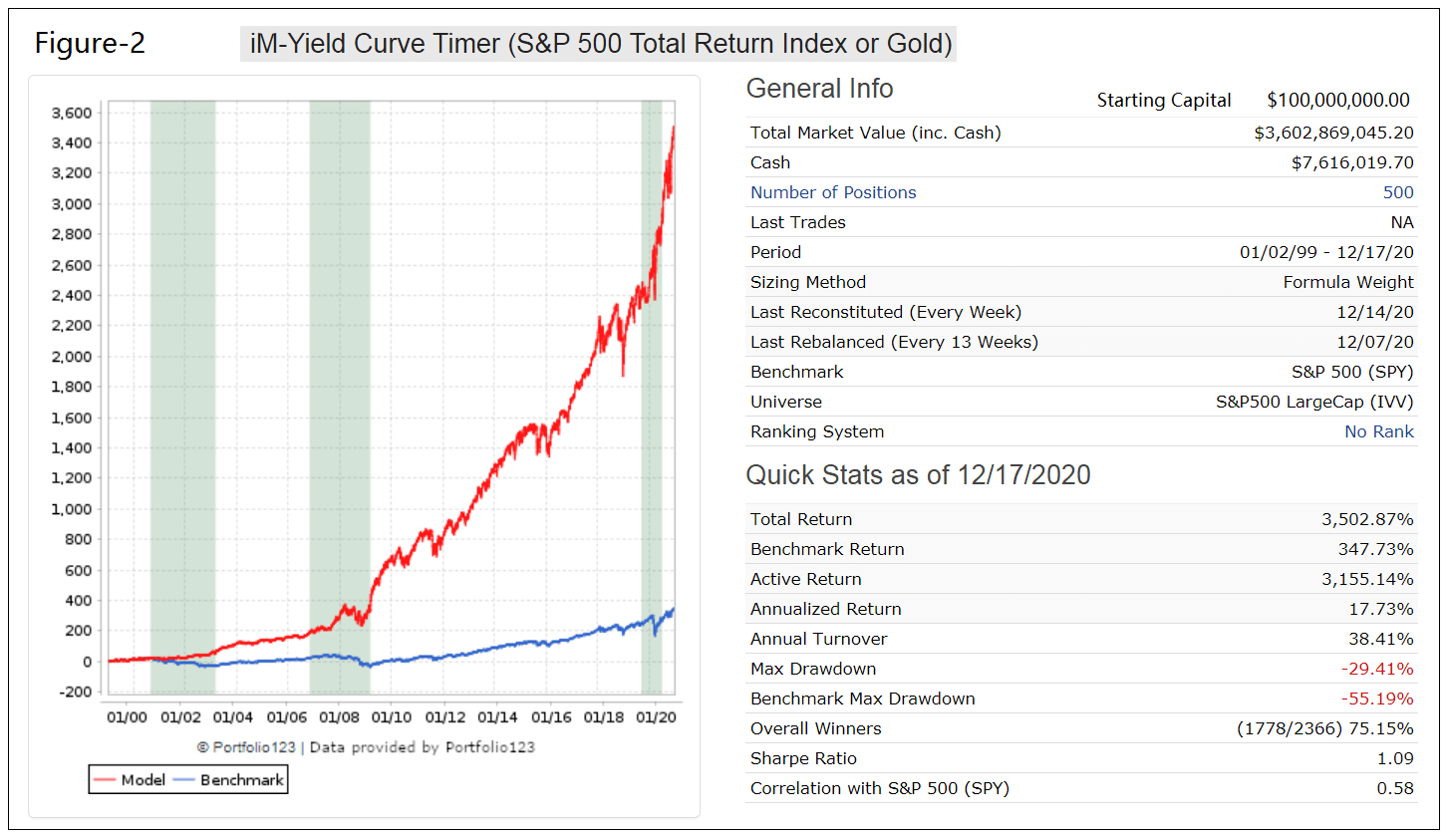 Performance comparison over periods when the model held gold

In the table below are the switching dates for the eight hedge periods determined in excel and, when applicable, also from the P123 backtest. Only one hedge period #5 did not provide a positive excess return.

The P123 analysis produced almost identical switching dates to what was calculated in excel, thus validating the calculation methodology.

In the table-2 below are the risk statistics from 1999 to 2020 for the model relative to the benchmark S&P 500 (SPY). It is evident from the risk measures that the trading strategy carries less risk than investing in SPY over the longer term.

It is common knowledge that an inverted yield curve is usually a harbinger of an oncoming recession. Also a downward trend of the Effective Federal Funds rate signals concern by the Federal Open Market Committee about a stalling economy.

This analysis uses only three relevant interest rates to determine signals to move from stocks to gold and vice versa. The analysis shows that such a strategy would have produced good returns. It would have, from 1967 to 2020, produced over 15-times more than a buy-and-hold investment in an S&P 500 stock index fund; from 1999 to 2020 it would have produced 10-times more.

All results shown are hypothetical and the result of backtesting over the period 1967 to 2020. No claim is made about future performance.

Posted on Dec 24, 2020 by Georg Vrba
← 6 Comments
With reference to Section 202(a)(11)(D) of the Investment Advisers Act: We are Engineers and not Investment Advisers, read more ... By the mere act of reading this page and navigating this site you acknowledge, agree to, and abide by the Terms of Use / Disclaimer