Six previously described market timing models which are periodically updated at our website iMarketSignals are used in the rules. They are:

The above six timers are incorporated with various combinations into two conditions which seek to determine good risk-on and risk-off investment signals for the stock market. A valid signal is obtained when both conditions return the same risk signal (either risk-on or risk-off), otherwise when they differ the risk situation is considered to be risk-neutral. Thus, this model is not a binary timer.

For the model, from January 2000 to January 2022, the percentage of time a particular risk situation existed was:

Performance of the iM-Multi-Model Market Timer

The model was backtested using the online portfolio simulation platform Portfolio 123, which also provides extended price data for ETFs prior to their inception dates calculated from their proxies. A minimum holding period of two weeks, closing prices and trading costs of about 0.025% of each trade amount were assumed in the backtest.

The simulation shows an annualized return of 34.2% with a maximum drawdown of -19.7% with only 169 trades; an initial investment of $100,000 would have grown to $65.5-million if one could have followed this model from January 2000 onward. Total trading costs were $440,000. A listing of realized trades is in the Appendix. 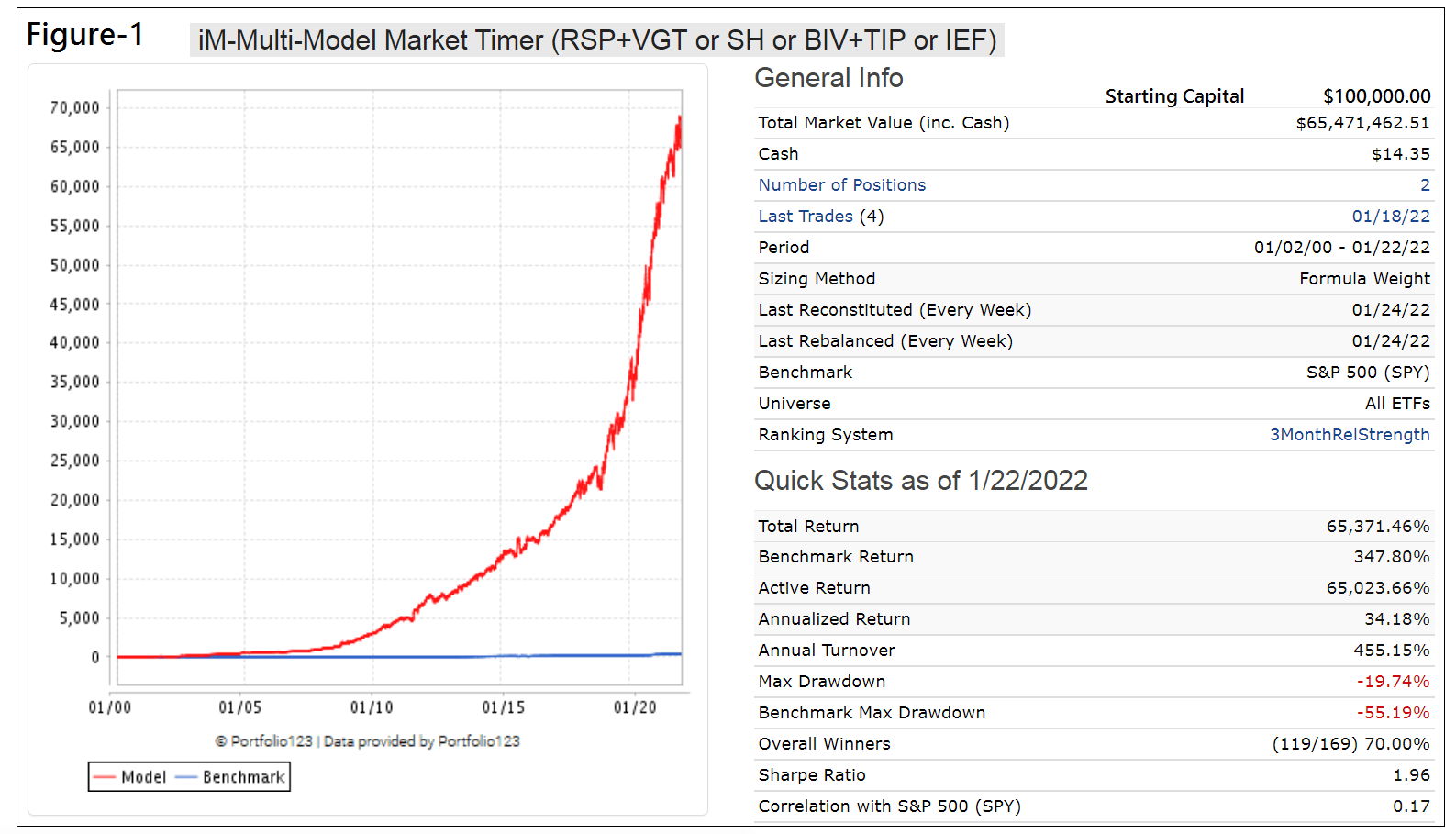 In the table below are the risk statistics for the model relative to the benchmark ETF (SPY). The model’s positive alpha indicates that this strategy would have outperformed its risk-adjusted benchmark return on average by 32.5% per year since January 2000 and 24.0% for the trailing 3 years. Additionally, the Standard Deviation for this model’s monthly returns is similar to that of SPY, indicating similar volatility and demonstrating that the model’s investment strategy should be a better alternative to buy-and-hold SPY over the longer term.

From the analysis it would appear that the iM-Multi-Model Market Timer could profitably be used to switch between the specified ETFs depending on the signaled risk situation. This model’s calendar year returns ranged from a minimum of 11% in 2015 to a maximum of 80% in 2008, and there would never have been a year with negative returns.

At iMarketSignals we will report weekly the status of this timer. The last trade, switching from risk-on to risk-neutral occurred on 1/18/2022, with current holdings being TIP and BIV.

Although this model performed extremely well over 22 years, there is no guarantee that it will perform well in the future.

Posted on Jan 24, 2022 by Georg Vrba
← 26 Comments
With reference to Section 202(a)(11)(D) of the Investment Advisers Act: We are Engineers and not Investment Advisers, read more ... By the mere act of reading this page and navigating this site you acknowledge, agree to, and abide by the Terms of Use / Disclaimer