This timer uses five live models with low correlation to each other, each designed to hold SPY during up-market conditions. These models are updated at the end of each week. When the majority of the models simultaneously hold SPY then the likelihood should be high that up-market conditions may exist.

The analysis and backtests were performed on the on-line portfolio simulation platform Portfolio 123 (P123) which provides historic financial data for stocks, bonds and ETFs from 1999 onward.

For each model the formula $model explores whether the model holds SPY at any particular time, and will return “1” if true otherwise “0”

The five models are:

The iM-ModSum Timer’s trading rules are:

The timing rules for this model are based on the state of yield curve and on the trend of the Effective Federal Funds Rate and signal switches from stocks to gold, and vice versa, near or during recession periods. A detailed description is here.

The basic iM-ModSum/YieldCurve Timer [(SPY-IEF) – GLD] model switches between ETFs SPY and IEF according to the ModSum timer rules and also holds ETF GLD during periods indicated by the YieldCurve timer. During those periods the holding and weights are stipulated to be 20%SPY and 80%GLD, or 80%IEF and 20%GLD when the ModSum timer signals to hold SPY or IEF, respectively.

Performance for the period Jan-2000 to Jan-2021 is shown in Figure-1. The annualized return would have been 22.4% with a maximum drawdown of -14.3% with trading costs of about 0.03% of each trade amount taken into account. For the benchmark ETF SPY the annualized return was 6.6% with a maximum drawdown of -55.2% for this period. 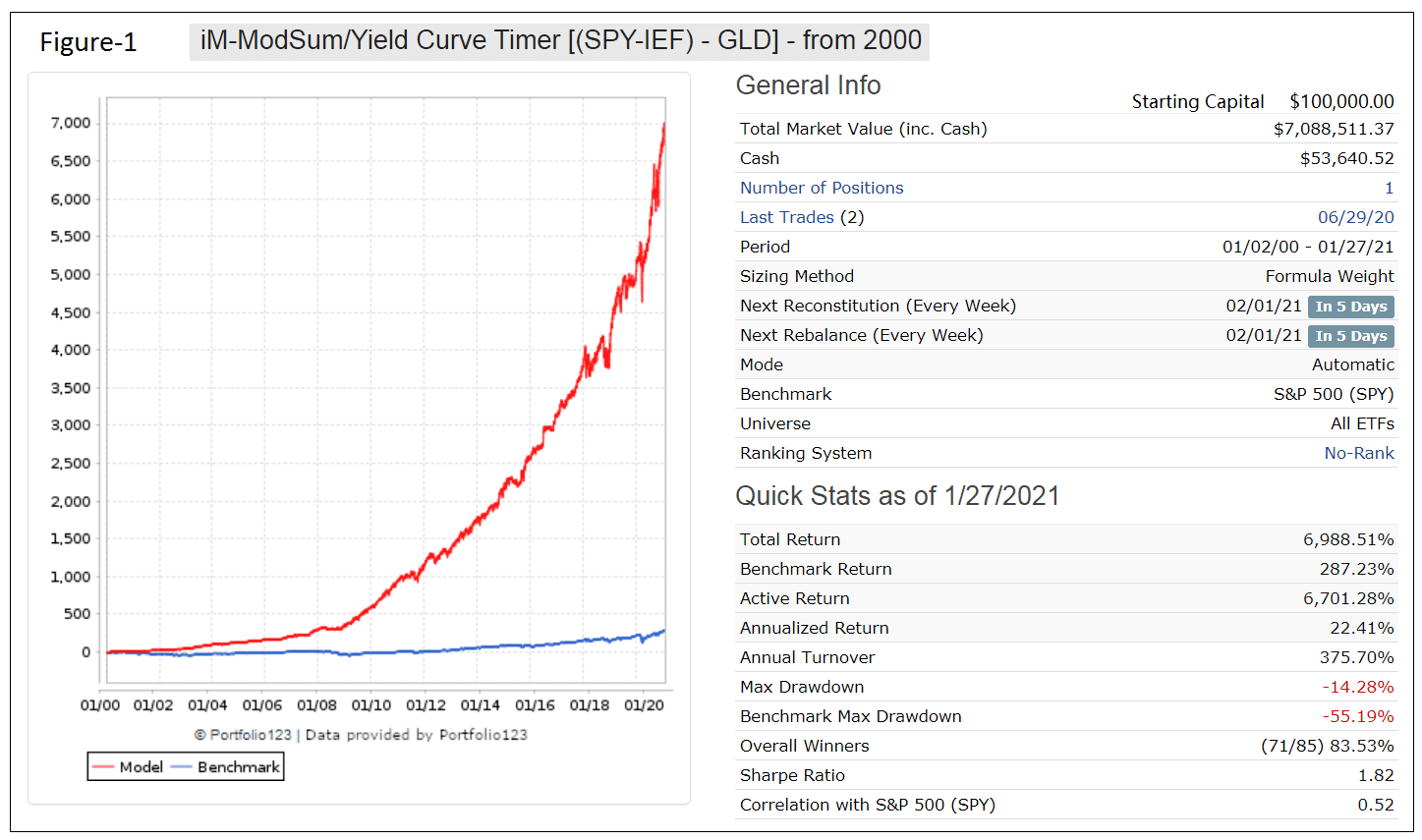 There are numerous possible ETF combinations that can be used in the iM-ModSum/Yield Timer model. For an example of a 1.5-times leveraged model see the Appendix.

It is not anticipated that the models will hold GLD anytime soon because the yield curve has to become inverted first.

At iMarketSignals we will report weekly holdings and performance of the basic iM-ModSum/Yield Curve Timer [(SPY-IEF) – GLD]. Members can then decide whether to follow a leveraged timer model, or make their own selection of equity and fixed income ETFs.

Performance of the ModSum/YieldCurve Timer with 1.5-times leverage

The iM-ModSum/Yield Curve Timer [(SPY+SSO – IEF+UST) – GLD] model switches between ETFs SPY+SSO (equal weight) and IEF+UST (equal weight) according to the ModSum timer rules and also holds ETF GLD during periods indicated by the YieldCurve timer. During those periods the holding and weights are stipulated to be 10%SPY+10%SSO and 80%GLD, or 40%IEF+40%UST and 20%GLD when the ModSum timer signals to hold SPY+SSO or IEF+UST, respectively.

This model would have had only positive returns every calendar year and would have also outperformed buy&hold SPY each year.

Disclaimer Note: All performance results are hypothetical and the result of backtesting over the period 2000 to 2021. Since performance is dependent on market-timing rules, the future out-of-sample performance may be significantly less if those rules are not as effective as they were during the backtest period.

32 comments on “The iM-ModSum/YieldCurve Timer Model”

Posted on Jan 29, 2021 by Georg Vrba
← 32 Comments
With reference to Section 202(a)(11)(D) of the Investment Advisers Act: We are Engineers and not Investment Advisers, read more ... By the mere act of reading this page and navigating this site you acknowledge, agree to, and abide by the Terms of Use / Disclaimer