In our continued effort to satisfy request for low drawdowns models with reasonable turnover and good returns we provide this model, which combines:

The combo showed a 22.2% annualized return with a maximum drawdown of -7.7% when backtested from Jan-2000 to Apr-2017 on the simulation platform Portfolio 123. Trading costs of 0.1% of all trade amounts were applied to provide for slippage and broker commission. Also when the asset tolerance exceeds 5%, rebalancing is required to maintain the specific asset allocation .

Stocks:
·     High dividend, low volatility S&P 500 stocks yielding significantly more than the average yield of the index and which also have a low 3-yr beta.

(Note: P123 provides extended price data for ETFs prior to their inception dates calculated from their proxies.)

In the model the average weekly return for bond ETFs is much lower than for gold and stock trades. Thus shorter-term bond funds could be used without affecting performance too much.  For example, when replacing BIV with BSV, LQD with SHY, IEF with SHV, and SCHP with VTIP, the annualized return becomes 19.79% with a -7.57% minimum drawdown.

The simulated performance from Jan-2000 to Apr-2017 is shown in Figure-1.  The red graph represents the performance of the model and the blue graph shows the corresponding performance of benchmark SPDR S&P 500 ETF (SPY). For the backtest period the simulated annualized return was 22.2% with a -7.7% maximum drawdown. 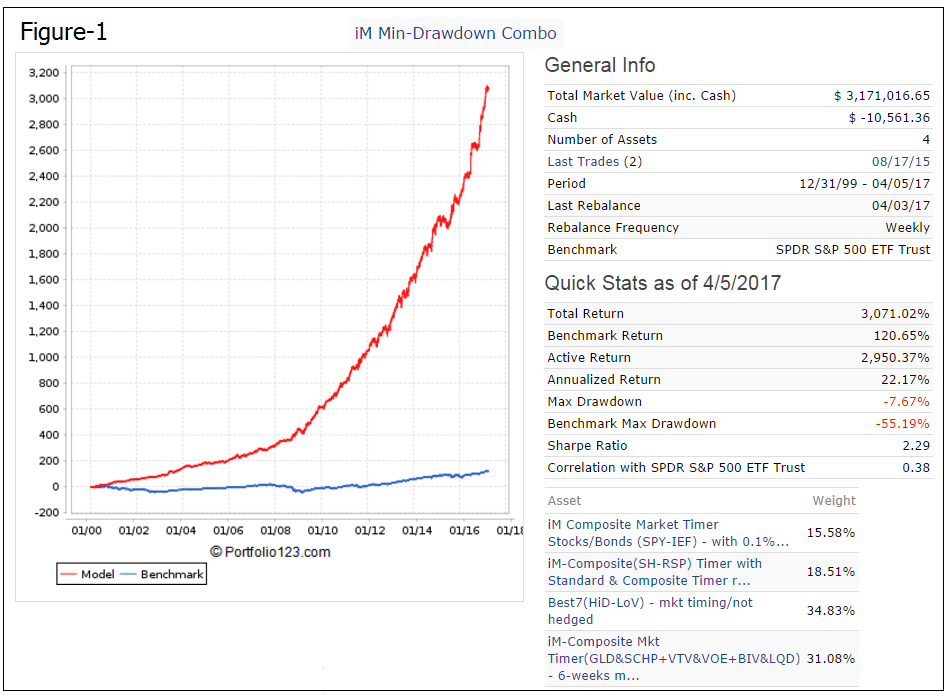 The simulated performance from Mar-2009 to Apr-2017 is shown in Figure-2. The start date for this period is the date when the S&P 500 was at its lowest level during the financial crisis recession.  For the 8-year backtest period the simulated annualized return was 25.3% with a maximum drawdown of -6.2%. The model out-performed with much lower drawdown the SPDR S&P 500 ETF (SPY). 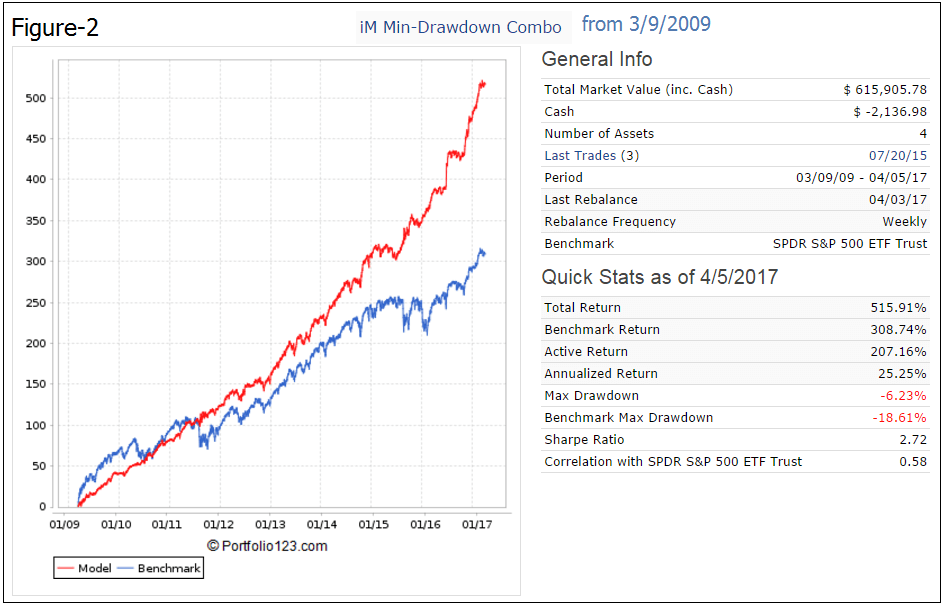 The simulated 2-year performance from Apr-2015 to Apr-2017 is shown in Figure-2. The model avoided the two market correction periods and showed a maximum drawdown of -4.3% versus -13.0% for SPY. 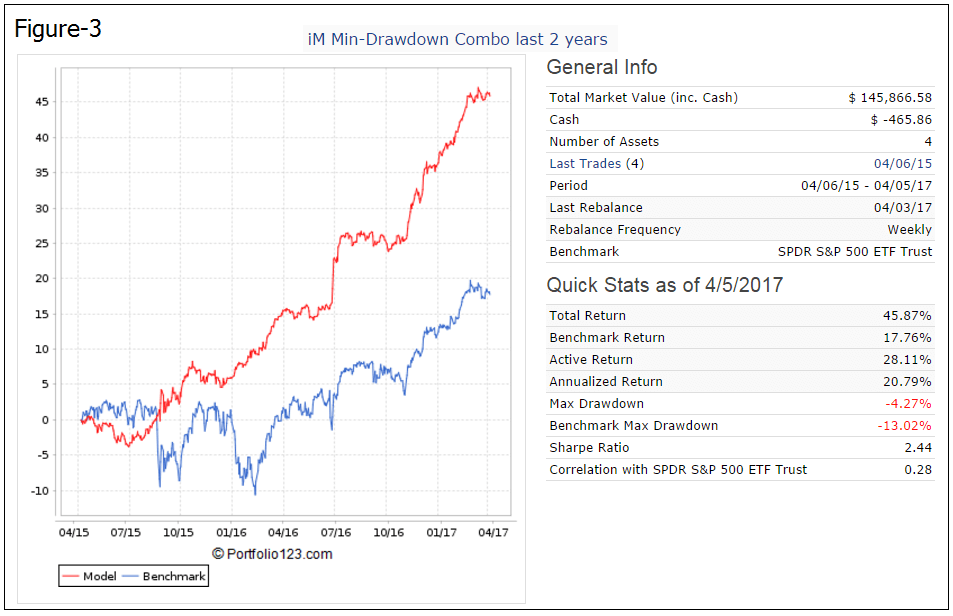 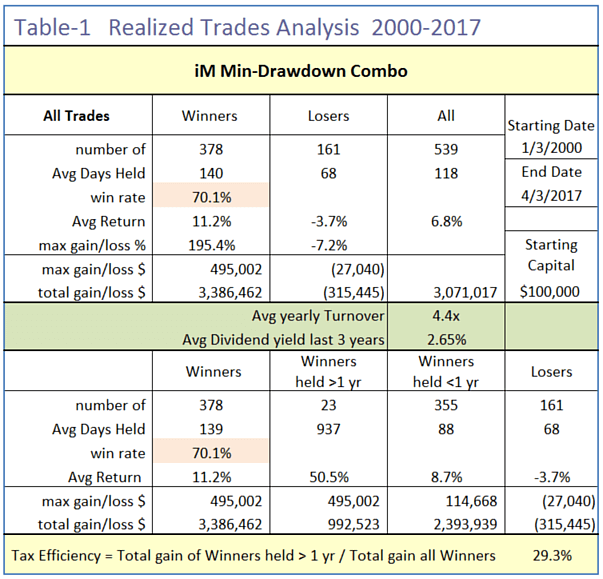 Holding periods and number of trades are listed below. Positions were held for an average of 118 days, winners for 140 days, and losers for 68 days.

Table 2 shows the performance statistics for the combination model. It never made a loss over a calendar year. The worst performance was for 2005, similar as for benchmark SPY. 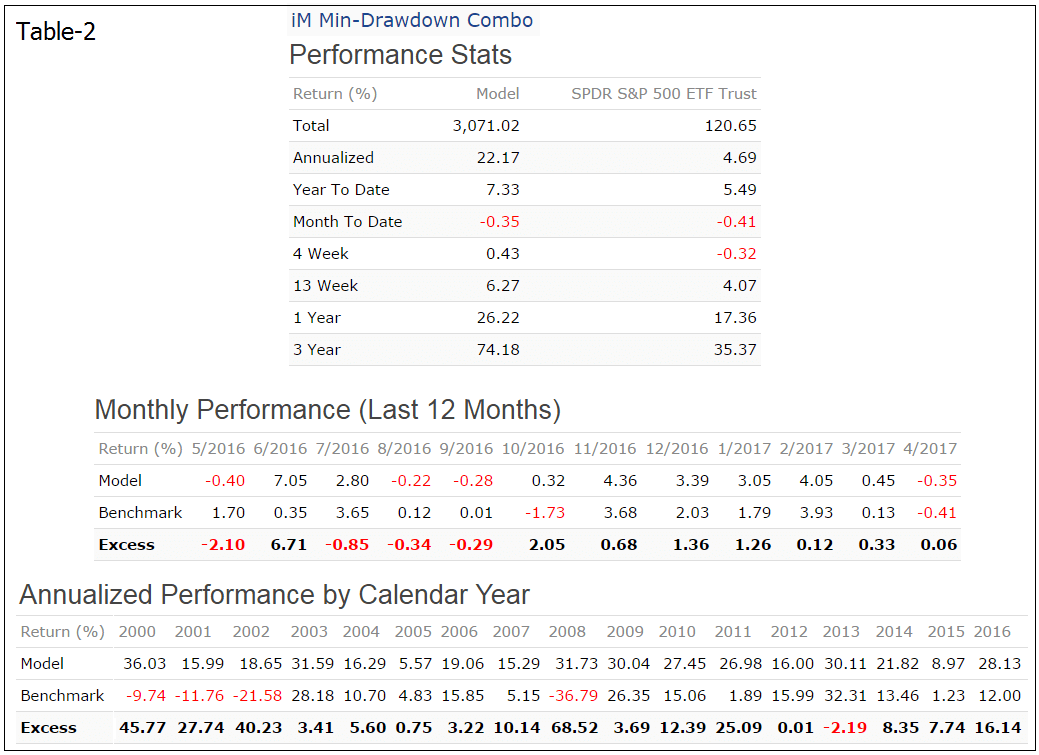 Table-3 gives risk measurements for the preceding 3-years and for the entire backtest period.

This model could be of interest to investors who can accept a moderate amount of trading activity, but may not be suitable for mutual fund investors.  During up-market periods the model did perform better than the benchmark SPY, and the various market timers built into the algorithms of component-models should prevent major drawdowns during down-market periods.

Also, in anticipation of rising interest rates it may be prudent to replace the bond ETFs with shorter-term bond ETFs which would have resulted in lowering the annualized return by only about 2.4% over the full backtest period.

On iMarketSignals we will report the performance of this combination model, with weekly trading signals normally provided on Sundays to Gold level members.

Further detailed analysis is presented in Figure-4 to Figure-8. 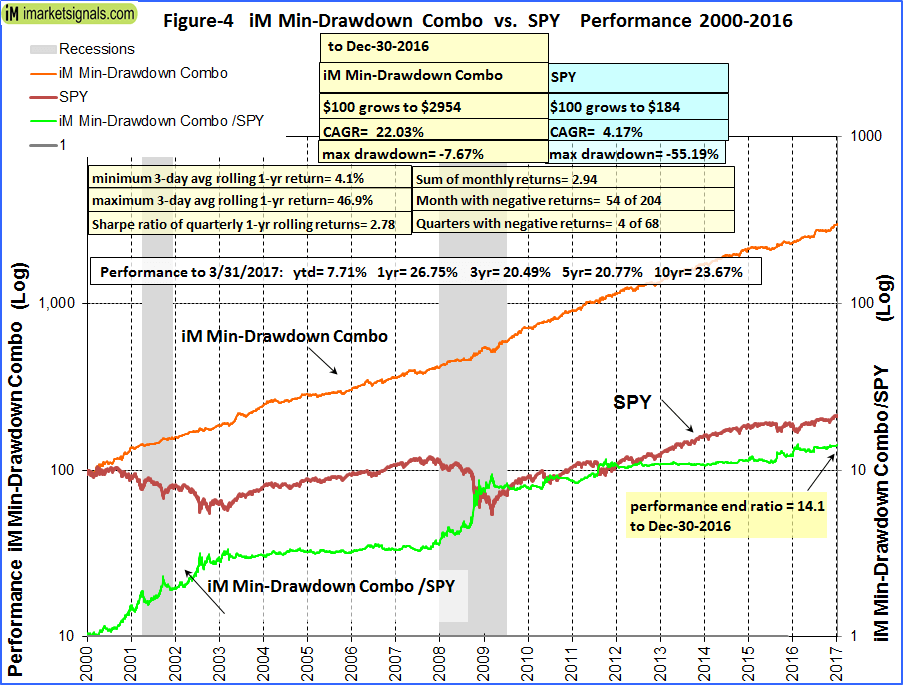 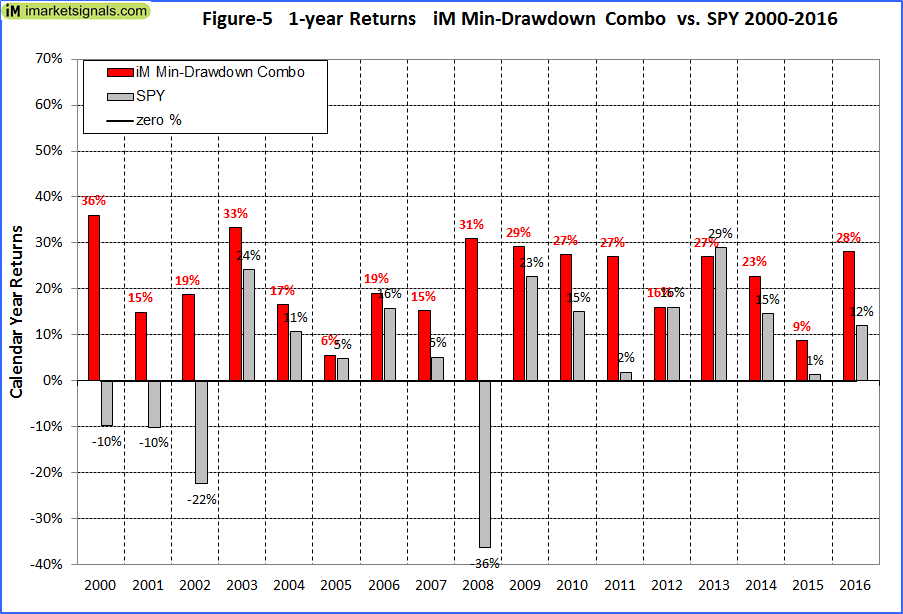 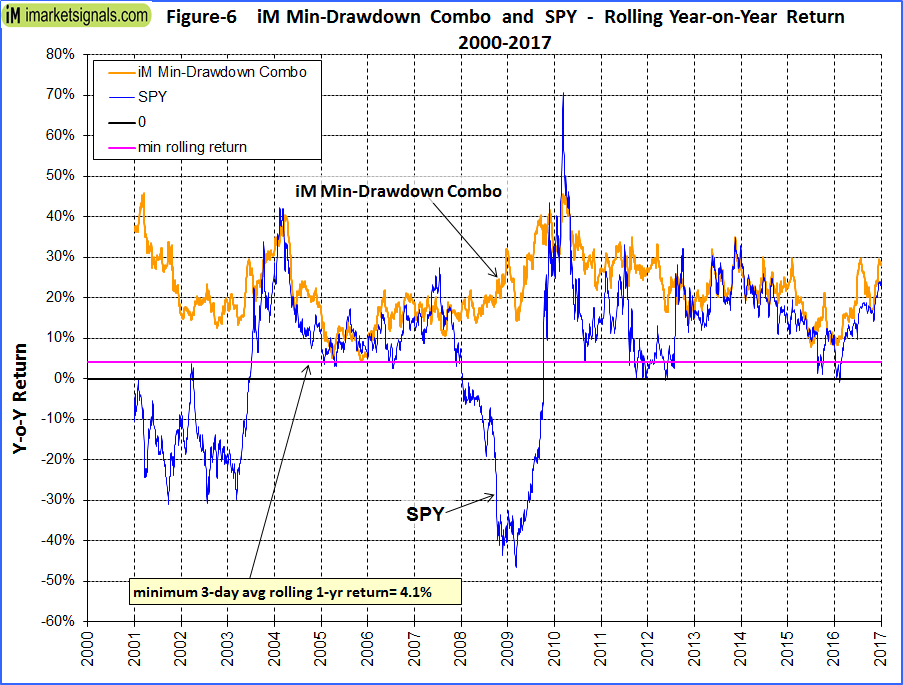 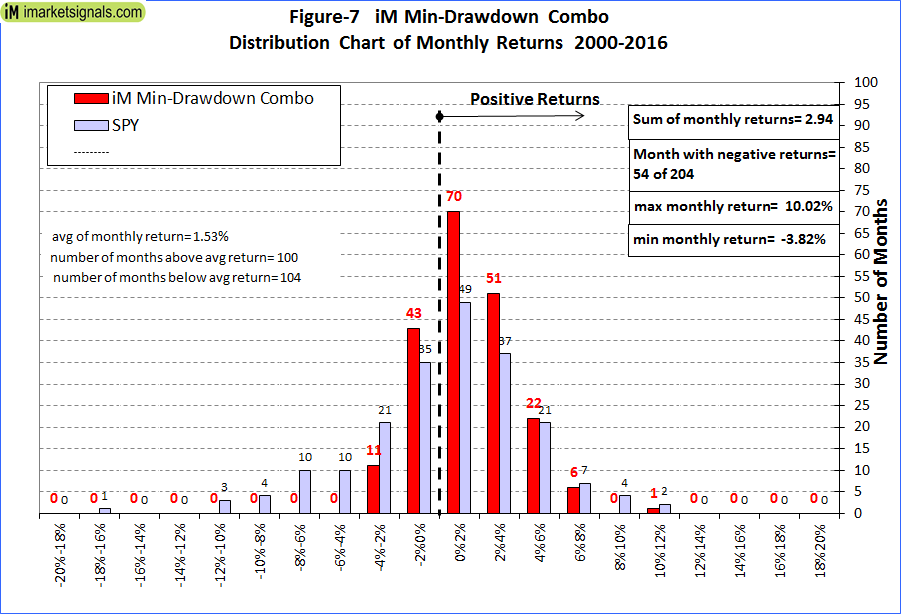 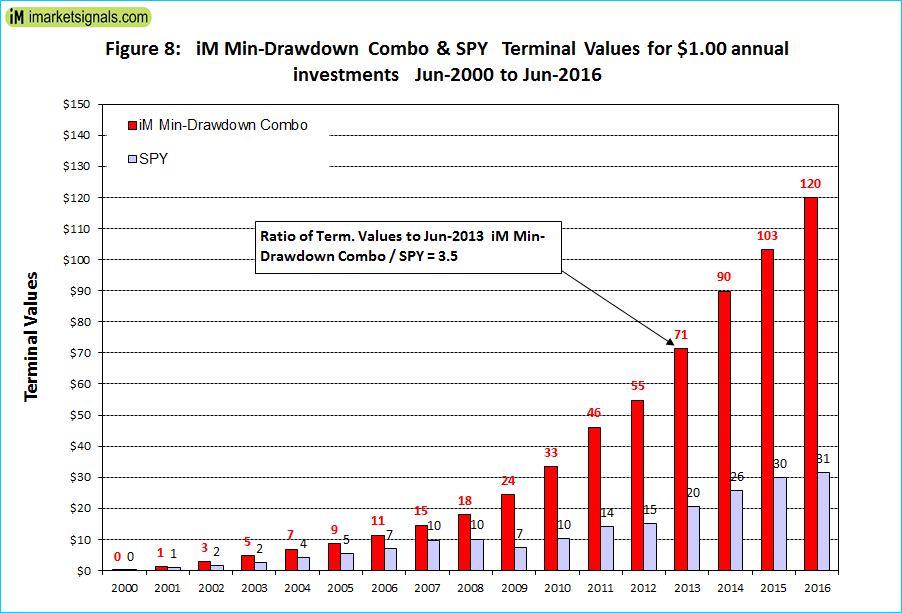 Note: All performance results are hypothetical and the result of backtesting over the period 2000 to 2017. Out-of-sample performance may be different. No claim is made about future performance.

32 comments on “The iM-Minimum Drawdown Combo”

Posted on Apr 8, 2017 by Georg Vrba
← 32 Comments
With reference to Section 202(a)(11)(D) of the Investment Advisers Act: We are Engineers and not Investment Advisers, read more ... By the mere act of reading this page and navigating this site you acknowledge, agree to, and abide by the Terms of Use / Disclaimer