A Winning Strategy to Profit from the Seasonal Effect in Equities

A long term study supporting the seasonal observation can be found here.  A related switching strategy model with cyclical and defensive ETFs is described here.

The seasonality of the S&P 500 is easily verified by backtesting with historic data. The S&P 500 with dividends from 1960 onward returned on average 1.92% for the yearly six-month periods May through October, the “bad-period”. For the other six months, the yearly “good-period”, from November through April, the average return was 8.47%.

More rigorous than observing is to statistically demonstrate that the six months from November to April are usually good-periods for equities. The null hypothesis H0 is the default position, namely that there is no difference between the average returns of the good-periods and bad-periods, the average return hereinafter referred to as the “H0-return”.

The test period, from January 1960 to April 2019, held 59 cyclical good-periods and 59 cyclical bad-periods for stocks, totaling 118 six-month periods, and showed an average return of 5.20% for all periods, the H0-return.

The diagnostic test can provide the following four outcomes, depending on the actual return for a period and its magnitude relative to the H0-return, namely the number of periods in the good-period group that test positive (a) and negative (b); and the number of periods in the bad-period group that test positive (c) and negative (d).

How often those four conditions occur over the observation period are the raw data for the analysis, shown in the Table-1 for this specific investigation.

This on-line diagnostic test calculator, using the input data of Table-1 gives statistics with 95% confidence intervals, as listed in Table-2. Definitions of the various statistical terms are on the linked website.

The positive likelihood ratio is 1.86 with a 95% confidence interval of 1.26 to 2.74; a value greater than 1 produces a post-test probability which is higher than the pre-test probability (the “disease prevalence” in the statistics below, in our case the “good-period prevalence”). 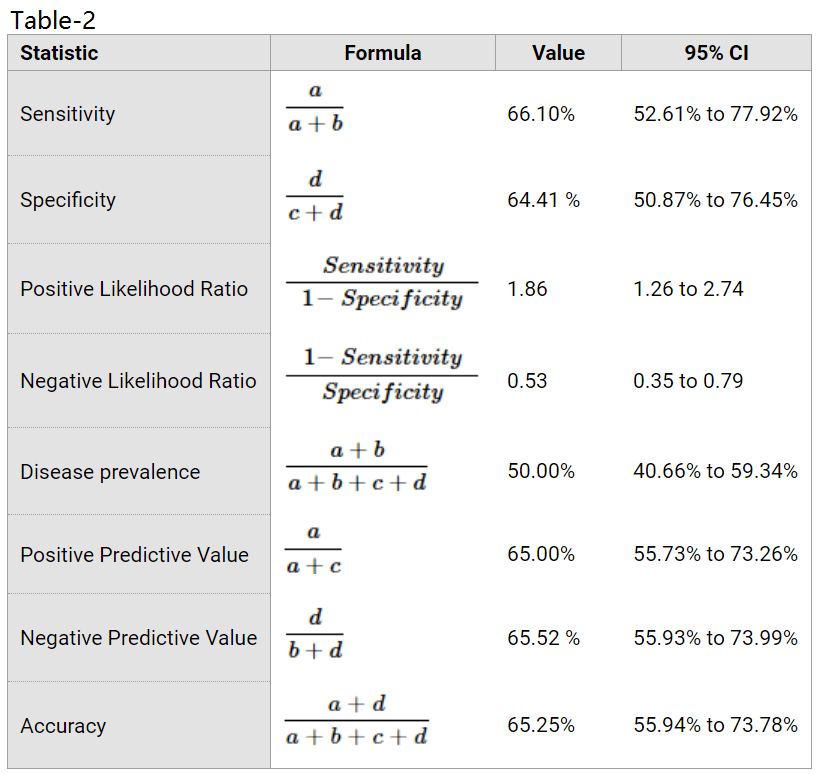 A strategy to profit from seasonality based on the statistical odds is to have more aggressive investments during the good-periods, and more defensive ones during the bad-periods.

Because there is a 65% chance to beat the average return over the good-periods, the strategy always invest in the S&P 500 from November to April. From May to October three alternatives were investigated: 100% fixed-income, 50% equity and 50% fixed-income, and cash only without interest.

Below list the five alternatives  considered. Models A, B, and E follow a seasonally variable allocation strategy, while C and D are fixed allocation models. Annualized returns are shown in brackets.

Prices since 1960 for the S&P 500 with dividends and 10-Year Treasuries were derived from various sources; see the Appendix.

The performance over 59 years from May-1960 to April-2019 for the five alternative models is shown in Figure-1, with data plotted at six-month intervals.  All trading was assumed to occur at the end of the last week of April and October.

The typical retirement savings strategy of holding 60% stocks and 40% bonds (Model D) is also one of the poor performers; $100 would have grown to $13,206 equivalent to an annualized return of only 8.6%. 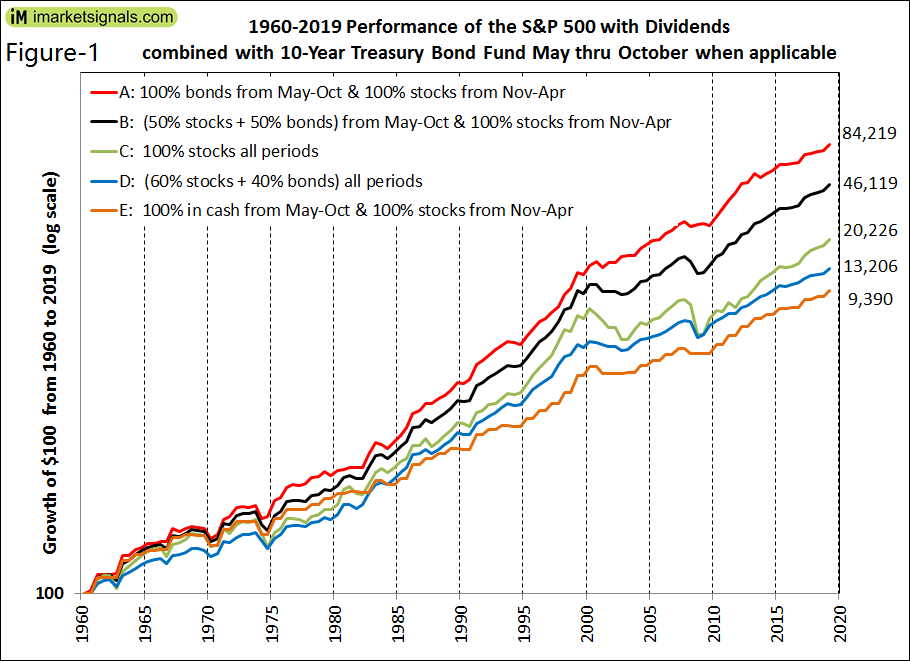 For the more recent performance of the seasonal SPY-IEF switching strategy, from Jan-2000 to Apr-2019, see Figure-2 in the Appendix.

Annualized returns over consecutive 20-year periods for Models A, B, and C are listed in Table-3. It is evident that it would always have been more profitable, even during the period 1960-1983 of rising interest rates, to have some fixed-income investment during the bad-periods from May thru October. Over any of the nine periods Model A always produced the highest return.

Based on the data since 1960, statistics confirm the seasonality of the stock market. The diagnostic test provides a 65% probability for the S&P 500 to perform better than average from November to April, and a similar probability to perform worse than average from May to October each year, indicating causation, namely that stock market returns increase or decrease due to seasonal effects.

Therefore, reducing equity allocation during the bad-periods and replacing it with fixed-income should be a winning strategy over the longer term.

Prices for a hypothetical S&P 500 index fund come from:

Price changes over the good- and bad six-month periods for a hypothetical 10-year Treasury bond fund come from:

The performance of a seasonal switching strategy SPY-IEF since Jan-2000 is shown with the iM-1wk-SuperTimer in Figure-2.

The iMarketSignals’ weekly updated iM-SuperTimer defines up-market and down-market periods for stocks. It uses a combination of 15 unrelated market indicator models (including the seasonal model), all updated weekly.

For the seasonal switching strategy 14 of its component market timer models were turned off, only leaving the seasonal timer model on.  Growth is plotted to a logarithmic scale, and the investment periods for stock fund SPY and bond fund IEF are depicted by the lower green graph in the figure.

Over the backtest period of more than 19 years a $5,000 initial investment would have grown to $27,465 by seasonally investing in SPY or IEF, for an annualized return of 9.2%. A $5,000 buy-and-hold investment in SPY or IEF would only have grown to about $14,000, for an annualized return of 5.5%. The maximum drawdown of -29% would also have been much better for the seasonal switching strategy model than the -55% drawdown for SPY. 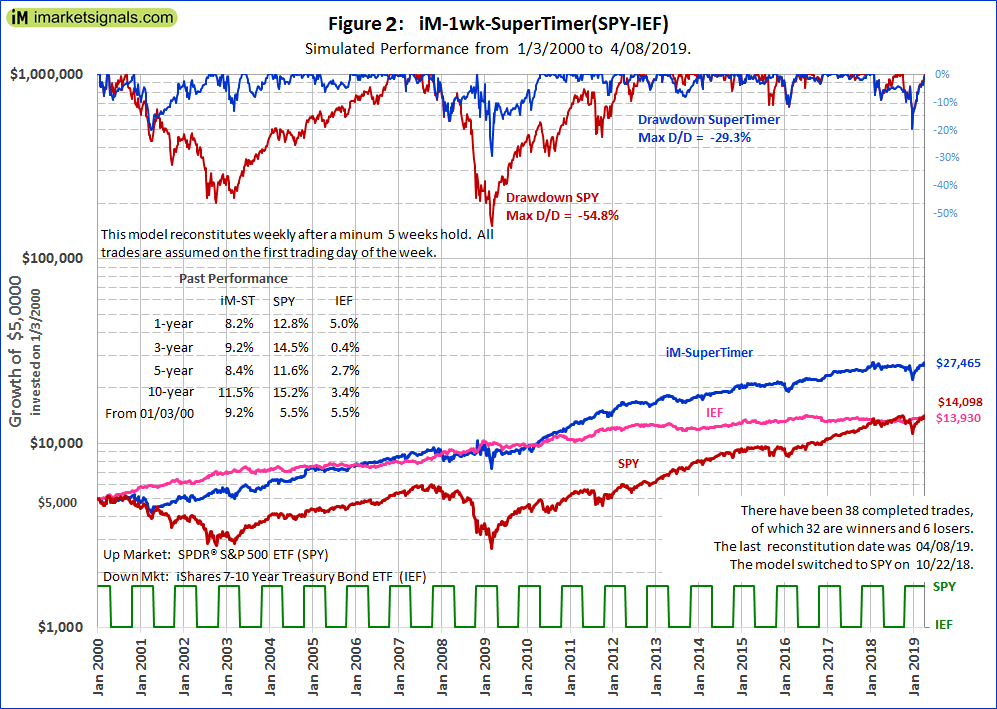 (For those who are interested, the iM-1wk-SuperTimer with all the 15 component market timer models from its arsenal turned on would have produced $169,692, for an annualized return of 20.1% with a maximum drawdown of -10%. There would have been 45 completed trades, 39 of them winners.)

Posted on May 17, 2019 by Georg Vrba
← 7 Comments
With reference to Section 202(a)(11)(D) of the Investment Advisers Act: We are Engineers and not Investment Advisers, read more ... By the mere act of reading this page and navigating this site you acknowledge, agree to, and abide by the Terms of Use / Disclaimer