This is an update to our series of assessing market valuation and estimating forward stock market returns. (previous article)

The historic data from Shiller’s S&P series is used to estimate future returns. The best-fit line for the real price of the S&P-Composite with dividends re-invested (S&P-real) from 1871 onward is a straight line when plotted to a semi-log scale. There is no evidence to suggest that this long-term trend, which shows an average compound annual real return of 6.7%, will be interrupted.  S&P-real and the best-fit line together with its 95% prediction bands are shown in Figure-1. (For the equation of the trend-line see Appendix A in this article from Aug-2012.)

The Shiller CAPE ratio and the CAPE-MA35 Method

Also shown in Figure-1 is the Cyclically Adjusted Price to Earnings Ratio, which is the real price of the S&P 500 Index, divided by the arithmetic average of the last 10 years of real reported 12 months earnings per share of the Index. Currently the graph of the CAPE-ratio shows a falling trend and the Dec-2018 level is at 27.9. This is 11.0 higher than CAPE-ratio’s 1881-2018 long-term average of 16.9.

An alternative approach to the standard use of the Shiller CAPE-ratio is to assess stock market valuation using a moving average of the CAPE-ratio, rather than referencing the valuation to the a fixed long-term average of the CAPE-ratio, as the standard method does. This should to some degree smooth or eliminate effects from changes to accounting practices, dividend policies, and other reporting parameters over time.

In this analysis a 35-year moving average of the CAPE-ratio is used, currently having a level of 23.6, which is significantly higher than the long-term average of the CAPE-ratio of 16.9.  The moving average over 35 years was chosen so that it would cover at least three business cycles based on the length of the longest recent business cycle expansion and contraction period of 128 months, from Mar-1991 to Nov-2001. 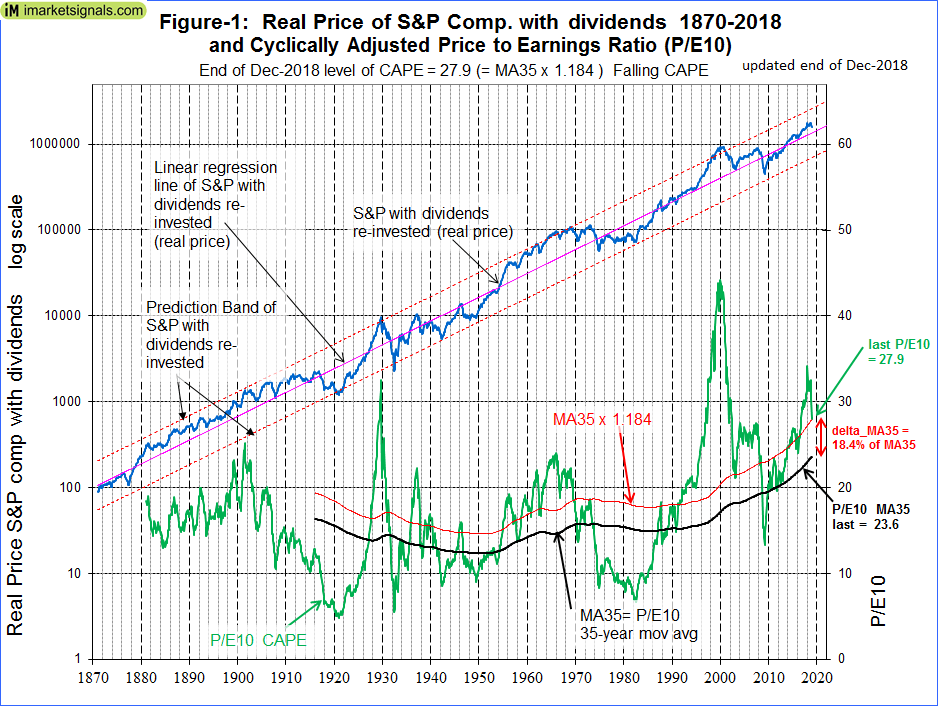 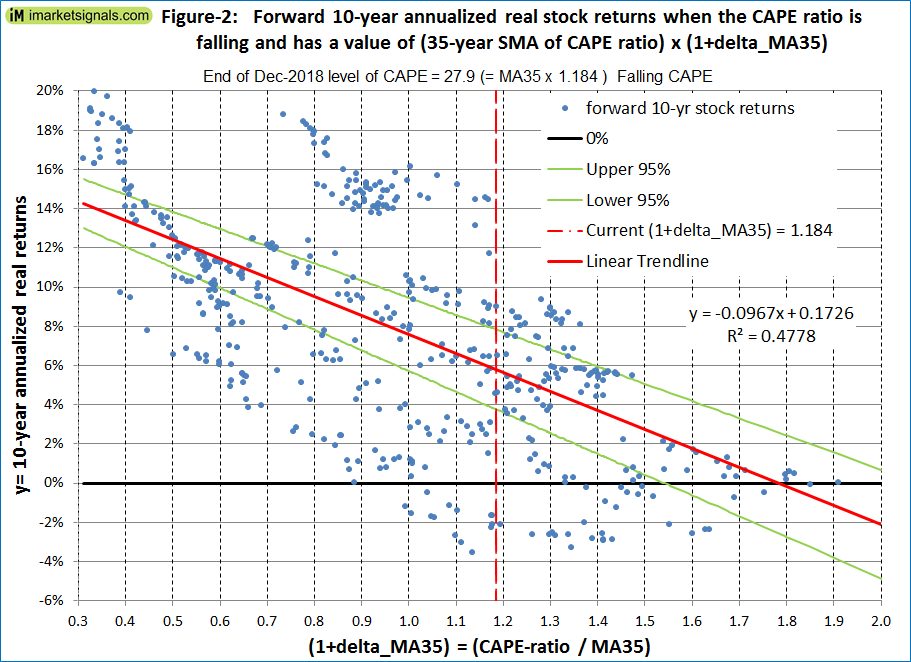 Also it is of interest that for the same (1+delta_MA35) value a rising CAPE-ratio forecasts higher 10-year annualized real returns than a falling CAPE-ratio; see Figure-4 in the Appendix.

Currently (1+delta_MA35) is at 1.184 and the CAPE-ratio is falling, therefore Figure-2 applies. From the trend line equation the forward 10-year annualized real return is 5.8%, as shown by the intersection of the red trend line and the red vertical line in the figure. This reasonably good expected return indicates that stock market valuation is currently not that excessive, contrary to what Shiller observed in September 2017.

From Figure-2 (falling CAPE ratio) one can conclude that it is safe to be in stocks when (1+delta_MA35) is at 1.0 or lower, that is when the value of the CAPE-ratio is equal to or less than its 35-year moving average. 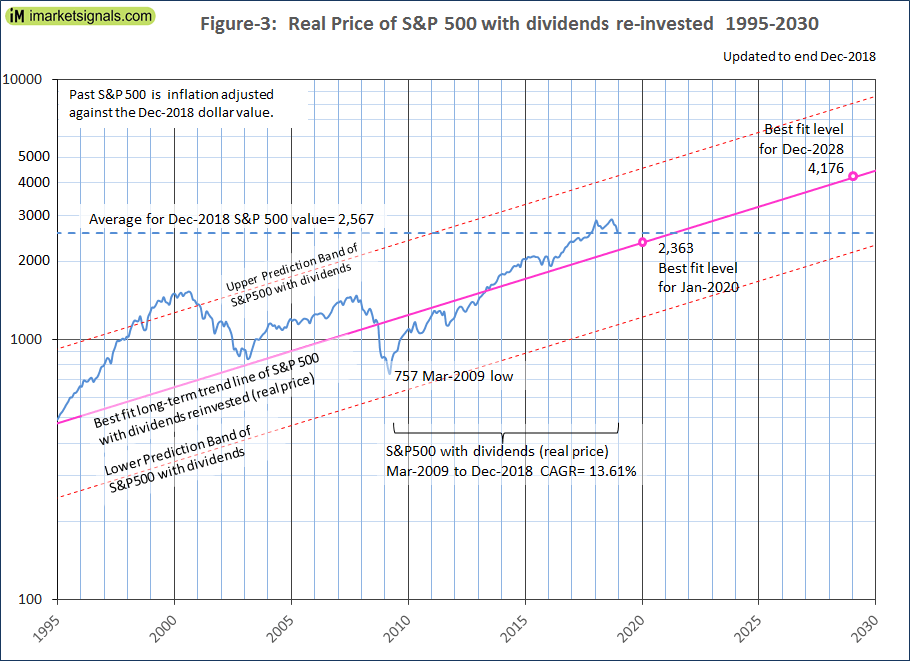 As shown in Figure-3, the average of the Dec-2018 values of the S&P 500 is 2,567 and located somewhat above the long-term best fit trend line. The historic trend forecast obtained by extending the best fit trend line shows a Dec-2028 value for S&P-real of 4,176. This would indicate an annualized real return of 5.0% over the next ten years if the actual value of S&P-real matches the best fit forecast level then.

How to use the CAPE-MA35 method

Investors can easily determine the 35-year moving average of Shiller’s CAPE-ratio by downloading the periodically updated Shiller spreadsheet from the Yale University website and calculate (1+delta_MA35), which is simply the most recent value of the CAPE-ratio divided by the most recent value of the 35-year moving average of the CAPE-ratio. Thereafter, depending on whether the CAPE-ratio is falling or rising, the expected 10-year forward returns can easily be obtained respectively, from Figure-2 or Figure-4 in this article.

Alternatively, for those not wanting to do this exercise themselves, the (1+delta_MA35) value and expected 10-year forward annualized real return of the S&P 500 index can also be found on our website iMarketSignals, where it will be updated monthly.

The current level of the CAPE-ratio relative to its 35-year moving average suggests that stocks are moderately overvalued. The CAPE-MA35 method and the historic long-term market trend forecast similar 10-year annualized real returns of 5.8% and 5.0%, respectively. Using the average of the two forecasts, then the most likely forward 10-year annualized real return would be about 5.4%.

However, this should not be interpreted to mean that stocks will actually produce a 5.4% annualized return over the next 10 years. From the CAPE-MA35 method and the historic long-term market trend’s prediction band limits, the minimum & maximum 10-year forecast returns are -2% & 14% and -2.5% & 12.1%, respectively, which are similar forecasts obtained from two different methodologies. Thus it is possible, but not very likely, that the market could show a small loss or a large gain over the next 10 years.

Figure-4 shows the historic 10-year real annualized returns which followed for various levels of (1+delta_MA35) when the CAPE-ratio was rising. 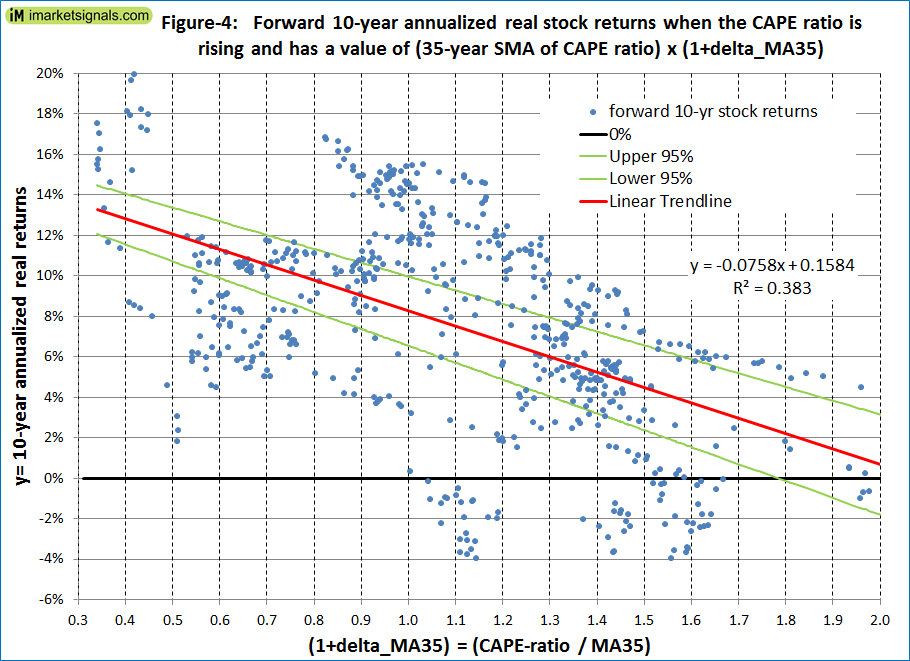 Posted on Jan 28, 2019 by Georg Vrba
No Comments
With reference to Section 202(a)(11)(D) of the Investment Advisers Act: We are Engineers and not Investment Advisers, read more ... By the mere act of reading this page and navigating this site you acknowledge, agree to, and abide by the Terms of Use / Disclaimer