Shiller warns in his recent commentary The Coming Bear Market? :

The US stock market today looks a lot like it did at the peak before all 13 previous price collapses. That doesn’t mean that a bear market is imminent, but it does amount to a stark warning against complacency.

He gives no guidance when the bear market will commence, which could be years away. The methodology used here provides information on how to avoid the coming bear market which the current high CAPE ratio may be signaling.

Shown at the top of Figure-1 is the real price of the S&P-Composite with dividends re-invested (S&P-real) from 1871 onward together with the best-fit line plotted to a semi-log scale. Below S&P-real is the CAPE ratio, which is the real price of the S&P 500 Index, divided by the arithmetic average of the last 10 years of real reported 12 months earnings per share of the Index, also referred to as P/E10.

It is apparent from those two previous records that a CAPE ratio becoming greater than 30 does not necessarily signal an imminent market collapse, and as such it is not a very useful indicator of expected market performance now; it only indicates that stocks are expensive. 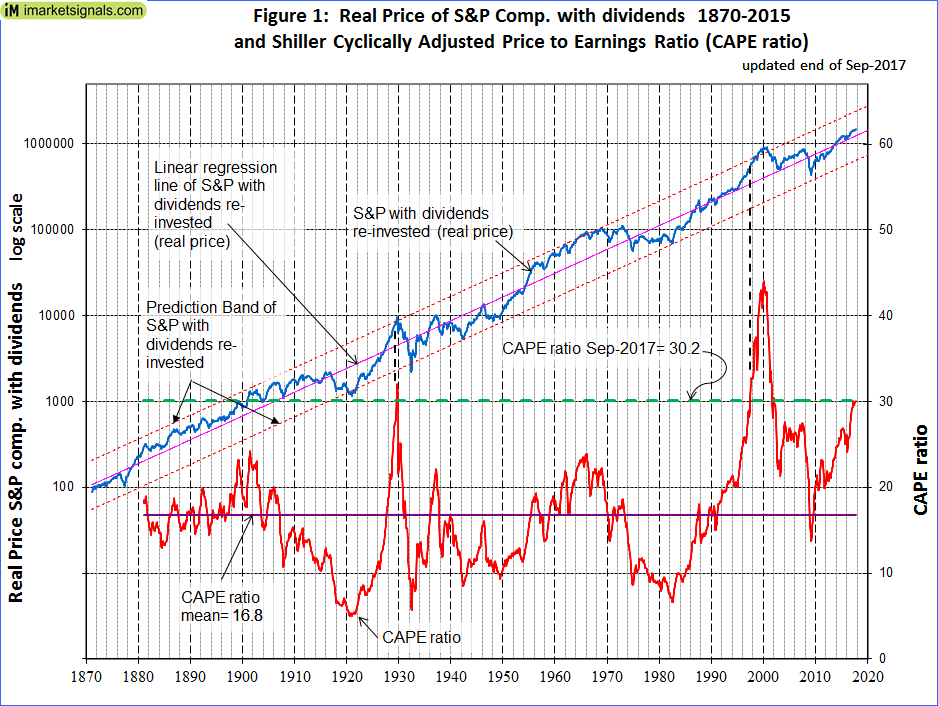 An alternative to Shiller’s approach is to assess stock market valuation using a 35-year moving average of the CAPE ratio (35MA), rather than referencing the valuation to the 1881-2017 long-term average. (Article link)

This method should to some degree smooth or eliminate effects from changes to accounting practices, dividend policies, and other reporting parameters over time. A moving average over 35 years was chosen so that it would cover at least three business cycles based on the longest recent expansion and contraction period of 128 months (from Mar-1991 to Nov-2001). 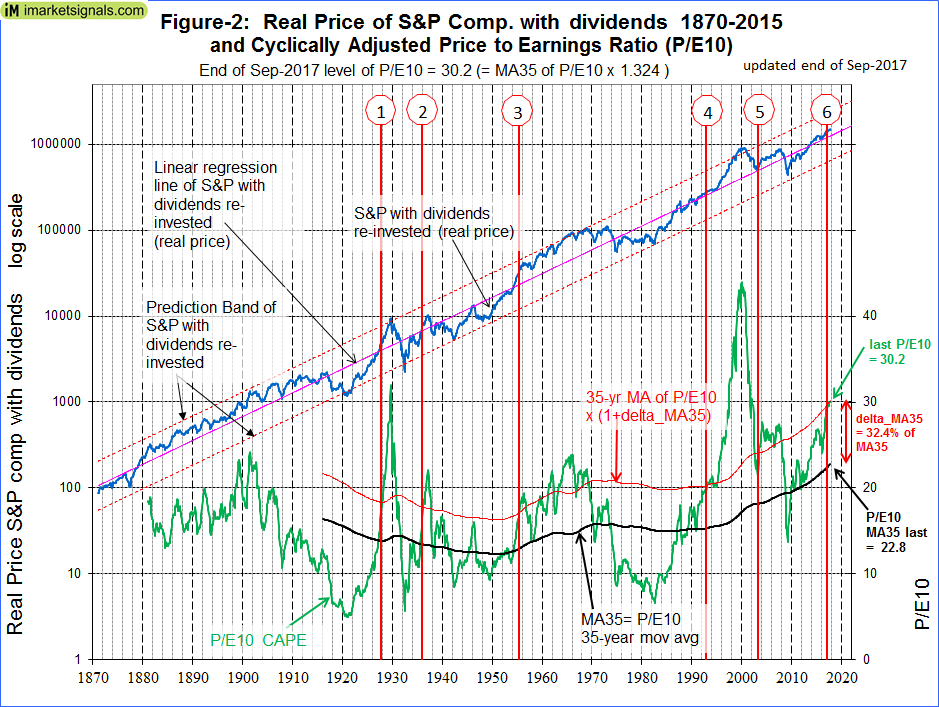 The current condition with a delta_MA35 of 32.4% is indicated by the red graph. One can see that the CAPE moved from below to above this graph many times during the last 100 years. An inspection of Figure-2 shows that the periods when the CAPE was above the red graph coincided approximately with periods when the S&P-real was also over its long-term linear regression line, indicating elevated market levels.

Five occasions, other than the most recent one, were identified when the CAPE moved from below to above a level of 35MA x 1.324, i.e. when similar conditions as the current one existed. (After Signal-3, five additional signals occurred before 1970. They were ignored since they all preceded the market low of Sep-1974 prior to Signal-4.)

After each delta_MA35 signal the market continued to gain for periods ranging from 0.9 to 13.4 years as shown in Table-1 below. Shiller is correct that the present Cape ratio “…doesn’t mean that a bear market is imminent”. One would have exited the market prematurely at the time of the delta_MA35 signals, missing out on substantial gains to the subsequent market highs as listed in column-7 of the table.

A better exit signal occurs when after a delta_MA35 signal the spread between the 5-month and the 25-month moving averages of S&P-real changes from positive to negative and simultaneously the score of the CAPE-Cycle-ID is at 0 or -2.

Tables-2 and -3 provides the information relevant to the improved exit signals.

The current level of the CAPE ratio relative to its 35-year moving average does suggest that stock prices are high. However, a bear market is not imminent and could be years away.

An exit signal after the CAPE moves from below to above a level of 35MA x 1.324 (the current condition) arises when subsequently the spread between the 5-month and 25-month moving averages of S&P-real changes from positive to negative and simultaneously the score of the CAPE-Cycle-ID is at 0 or -2.

Currently the 5-month moving average of S&P-real is higher than the 25-month moving average; the spread between them is positive, standing at +133,232, and the CAPE-Cycle-ID score is +2. Therefore, the Moving Average CAPE Ratio Methodology is not signaling to exit the stock market now.

The monthly updates of the CAPE-Cycle-ID and the spread between the 5-month and 25-month moving averages of S&P-real can be followed at iMarketSignals.

Posted on Oct 27, 2017 by Georg Vrba
← 3 Comments
With reference to Section 202(a)(11)(D) of the Investment Advisers Act: We are Engineers and not Investment Advisers, read more ... By the mere act of reading this page and navigating this site you acknowledge, agree to, and abide by the Terms of Use / Disclaimer