We warned since Friday 11/23 of an early December looming Death Cross. After Tuesday’s sell off, and the S&P 500 loosing 3.25% on the day, and now at the time of writing with futures pointing downward after the arrest of Huawei’s chief financial officer, the Death Cross will be avoided today if the S&P 500  closes above 2602, otherwise it will happen on Friday December 7. 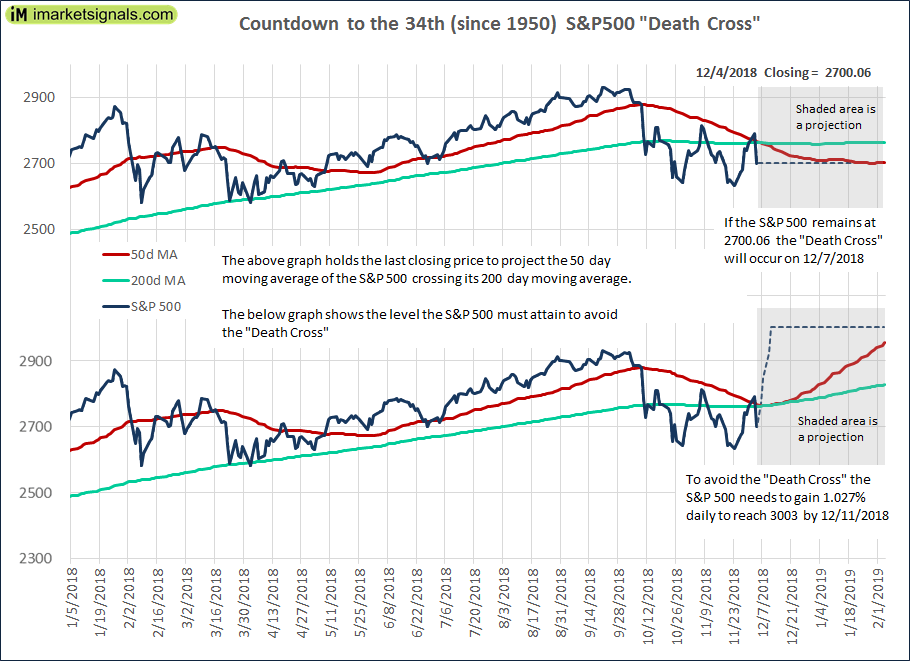 Based on past history of the performance of the S&P 500, there is no need to panic. A Death Cross does not always result in major market losses, as can be seen from the analysis. However, it would appear that one should avoid being invested in the stock market during the first two months after a DC, as there were many losses during this period, whereas the historic maximum gain was only about 13% in this period after any of the 32 DCs.

It is prudent for asset allocation to be in accordance with prevailing market conditions. More aggressive investments can be used during up-market periods, while more conservative investments are applicable during down-market periods. It would appear that good market timing models, such as our Composite Market Timer could provide guidance after Death Cross events.

Posted on Dec 6, 2018 by Anton Vrba
← 5 Comments
With reference to Section 202(a)(11)(D) of the Investment Advisers Act: We are Engineers and not Investment Advisers, read more ... By the mere act of reading this page and navigating this site you acknowledge, agree to, and abide by the Terms of Use / Disclaimer
Share This