Performance Update of the Best10(VDIGX)-Trader: Trading the Stocks of the Vanguard Dividend Growth Fund – VDIGX

According to Vanguard, the Dividend Growth Fund

“focuses on high-quality companies that have both the ability and the commitment to grow their dividends over time and seeks above-average current income and long-term growth of capital and income. The advisor, Wellington Management Company, LLP, invests in a diversified array of stable, well-managed companies that have a history of or a potential for growing dividends over time. Valuation is key to security selection, with the advisor preferring stocks that trade at a discount to the market or that possess an attractive risk/reward profile”.

In this previous article we showed by backtesting that better returns than those from the fund could be obtained by applying a ranking system to the stock holding of VDIGX (the universe), and investing periodically only in the ten highest ranked stocks, bought and sold according to certain rules.

For the live model all rules remained the same as for the original simulation, except that the model’s universe was periodically updated with the stock holding of VDIGX which Vanguard publishes approximately every three months.

The model assumes an initial investment of $100,000 and runs on the on-line platform Portfolio 123. Trading costs, including slippage was taken as variable, which amounts to approximately 0.10% to 0.15% of trade amounts.

The iM-Best10(VDIGX)-Trader is now three years old, and since Dec-2014 we have published trade signals, holdings and performance on our website iMarketSignals.com. An example of the weekly update can be found in the Appendix. 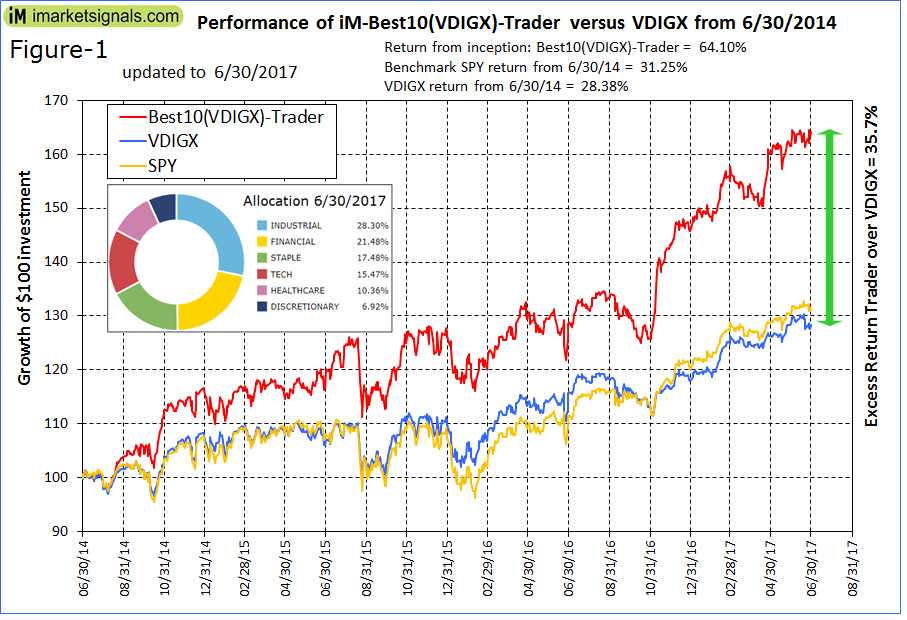 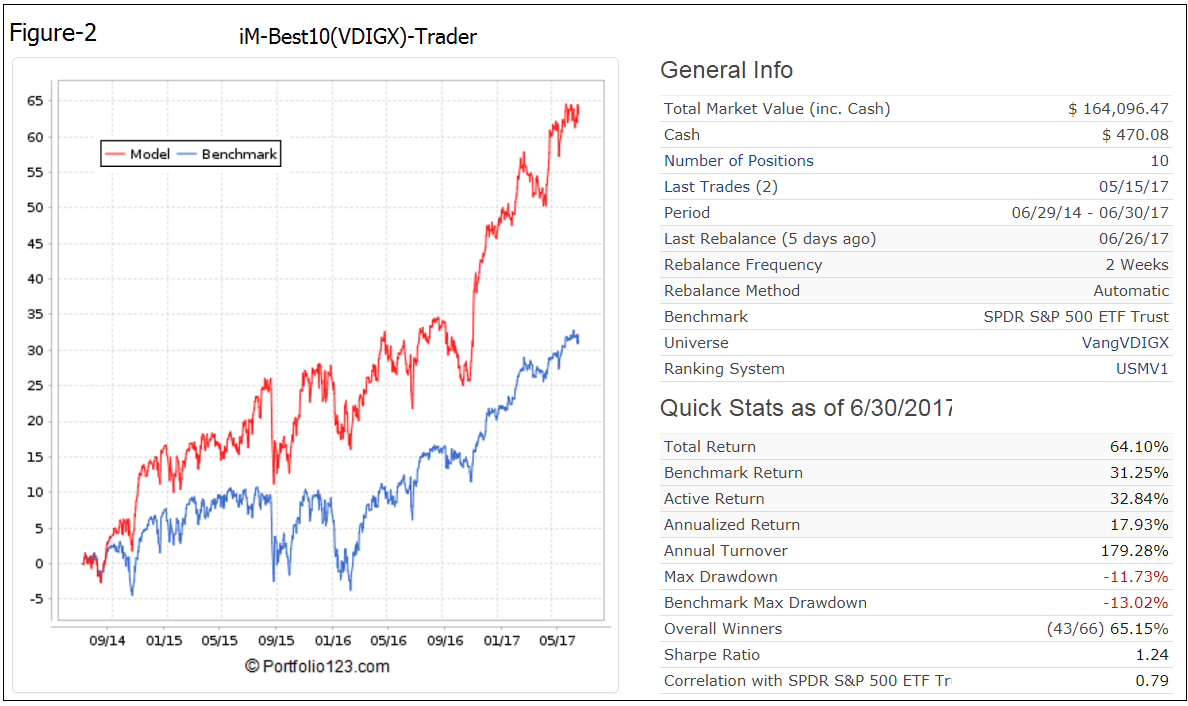 Using a ranking system to rank the stock holdings of VDIGX and only investing periodically in the 10 highest ranked stocks produced much better returns over the last three years than the fund itself.  This is confirmation of the expected performance from backtest (B) in the original model description reproduced in the Appendix below for easy reference.

The backtest was over a 3-year period and shows that the model should out-perform SPY. In the backtest the model produced about 1.5-times more than SPY, which is less than the actual 3-year performance to Jun-2017 of about 2.0-times that of SPY.

To receive the signals and weekly performance updates of the iM-Best10(VDIGX)-Trader a Silver subscription is required.

Results for backtest (B) with 10 selected stocks from VDIGX’s current holdings:

Had one on Dec-8-2011 invested equal weight in the 10 highest ranked stocks, rebalanced every 2 weeks and applied buy and sell rules, then over 3 years to Dec-8-2014 the total return would have been 113.4% and the annualized return (CAGR) would have been 28.7 %. Allowance was made for an expense ratio of 0.31% as for the fund.

This strategy would have provided much higher returns than Vanguard’s Dividend Growth Fund or SPY.  Going forward, it will be a simple matter to update the Trader model periodically with the point-in-time holdings of VDIGX to eliminate any possible effect of survivorship bias. 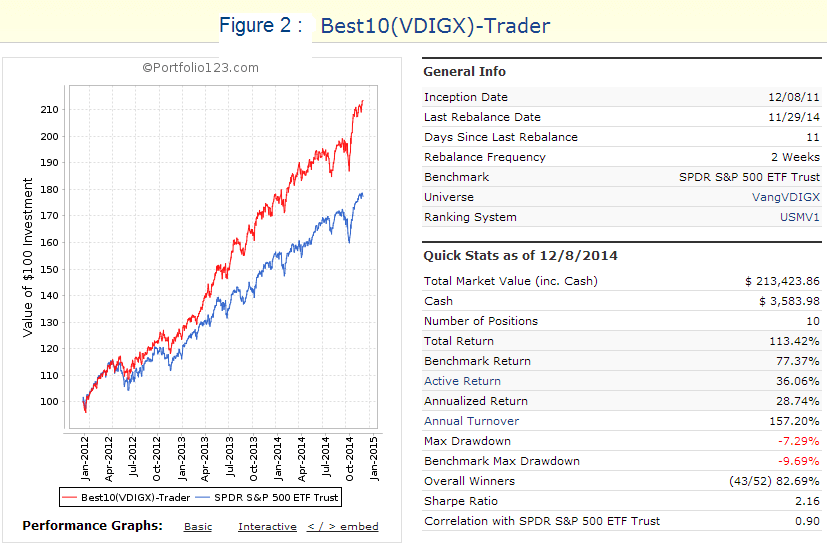 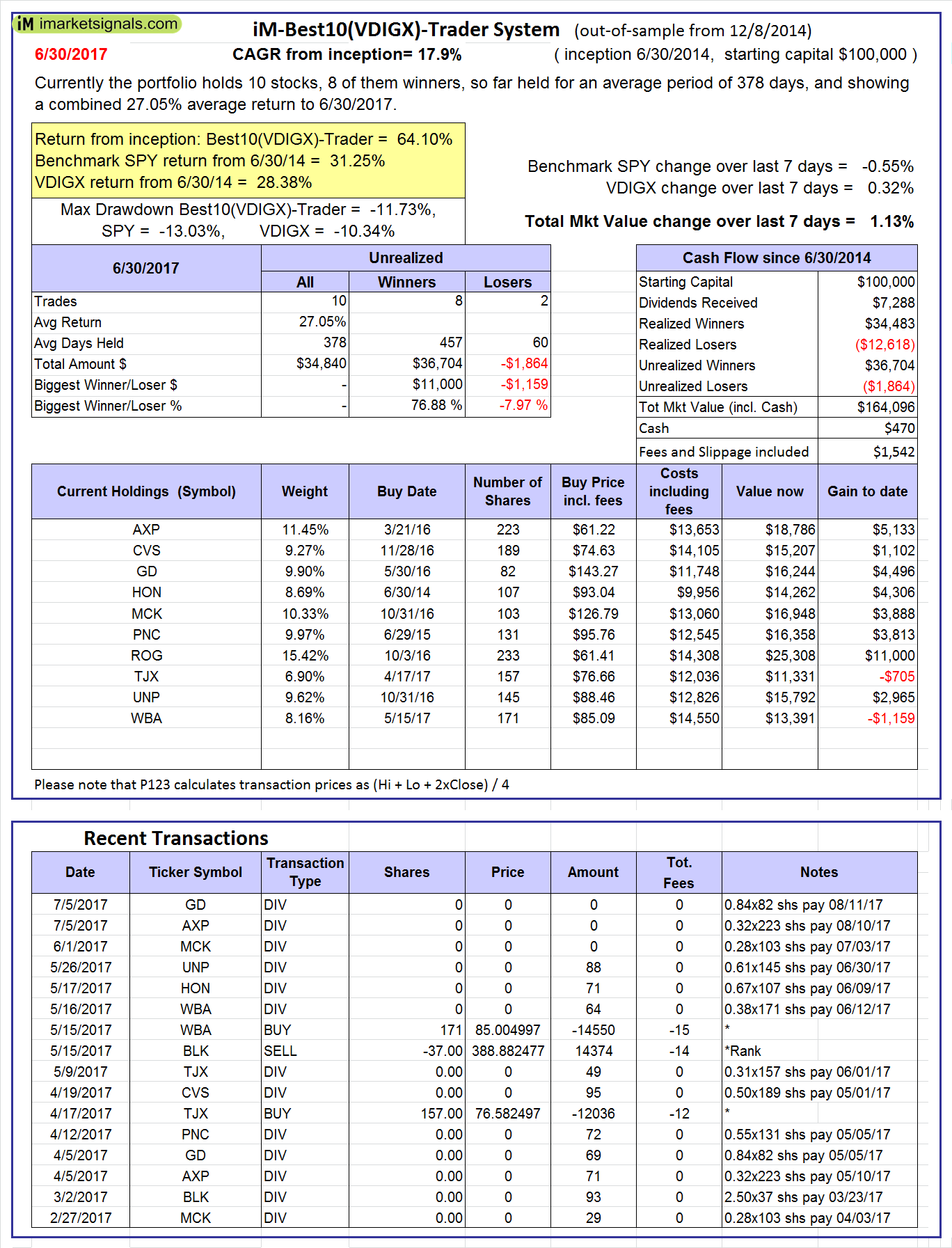 Posted on Jul 6, 2017 by Anton Vrba
No Comments
With reference to Section 202(a)(11)(D) of the Investment Advisers Act: We are Engineers and not Investment Advisers, read more ... By the mere act of reading this page and navigating this site you acknowledge, agree to, and abide by the Terms of Use / Disclaimer