Profiting from Market Volatility with the “Anti-VIX” ETF SVXY

SVXY seeks daily investment results, before fees and expenses, which correspond to the inverse (-1x) of the daily performance of the S&P 500 VIX Short-Term Futures Index. VIX is the symbol for the Chicago Board Options Exchange (CBOE) Volatility Index, which is a predictor of the market’s average volatility over the next 30 days.

Figure-1a shows the performance of SVXY from Jan-2007 onward. Clearly it is not advisable to hold this fund for extended periods because of the large drawdowns which can be seen in Figure-1b. The hypothetical SVXY would have lost about 92% from 2007 to 2008/9 and further large drawdowns followed; 75% in 2011, 56% in 2015, and 68% in 2016. It is evident that SVXY should only be held during up-market periods and is not suitable as a long-term investment. 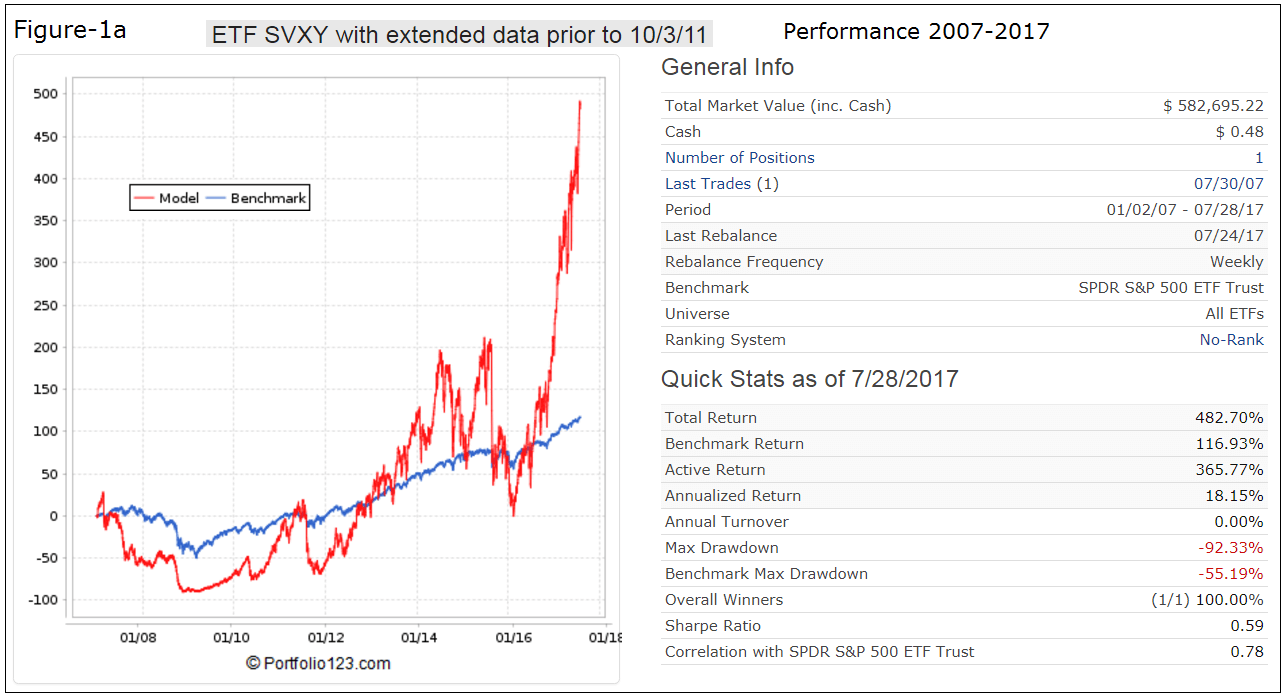 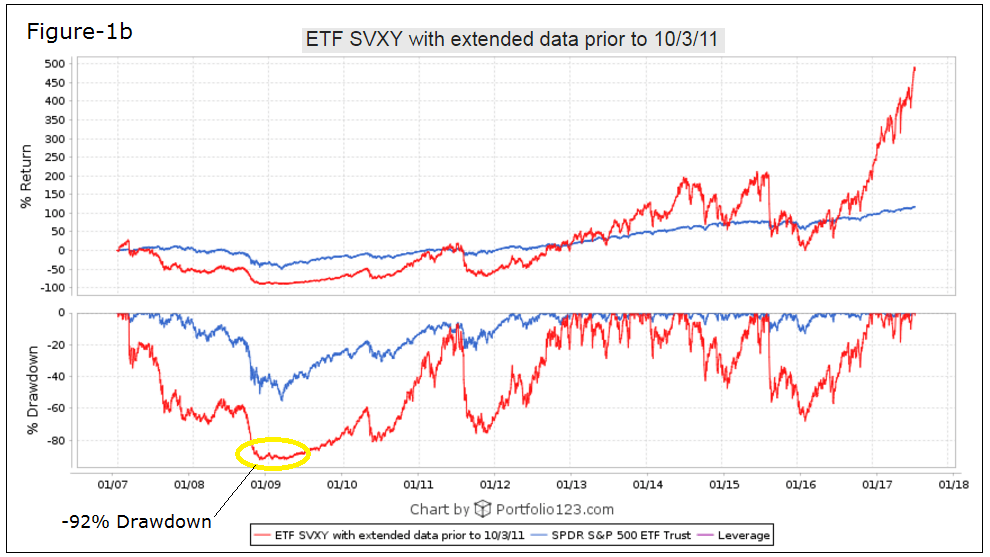 Performance of a SVXY–Cash Model

Figure-2a shows the performance of SVXY when timed with the iM-Composite Market Timer and the VIX. The simulated annualized return from Jan-2007 to end of Jul-2017 was 69% with a maximum drawdown of -43%.

This model buys SVXY only when the Composite Market Timer Score is greater or equal to 50; i.e. when up-stock market conditions prevail.

The model is rebalanced weekly on the first trading day of the week using closing prices, and transaction costs were assumed as 0.1% of the trade amounts to account for commission and slippage.

There were only 17 periods when the model was in SVXY, about 60% of the backtest period; otherwise it was in cash, as can be seen from Figure-2b. 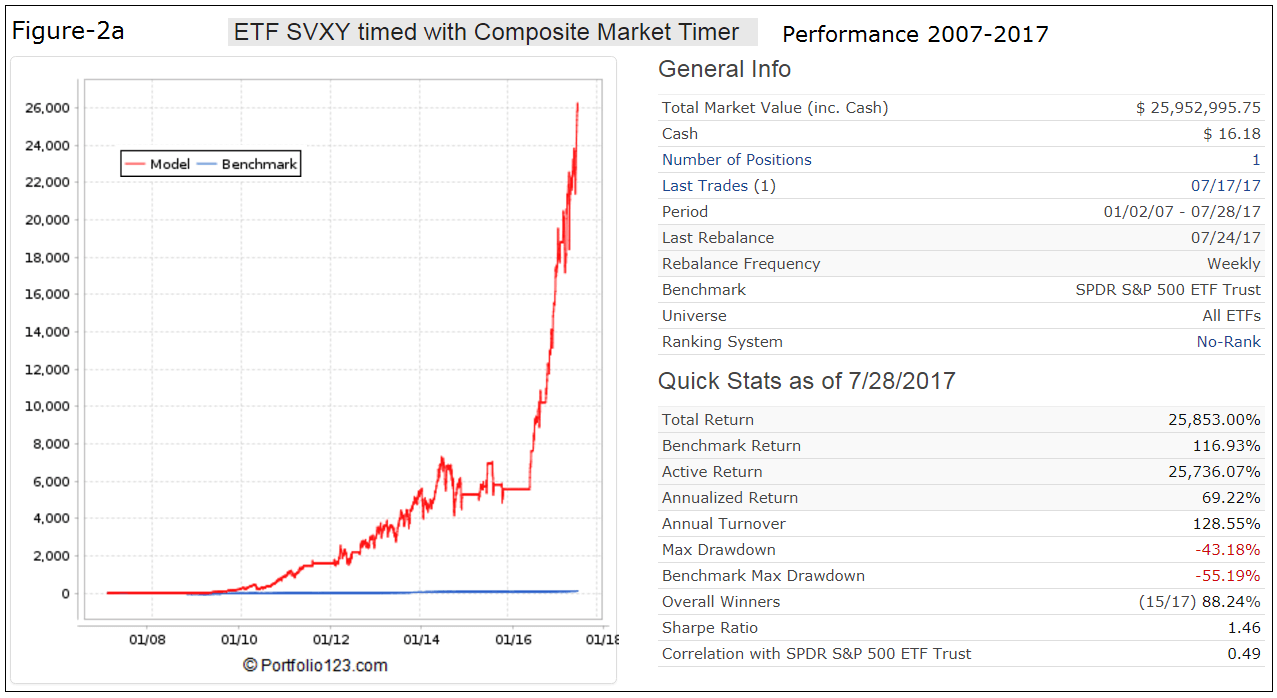 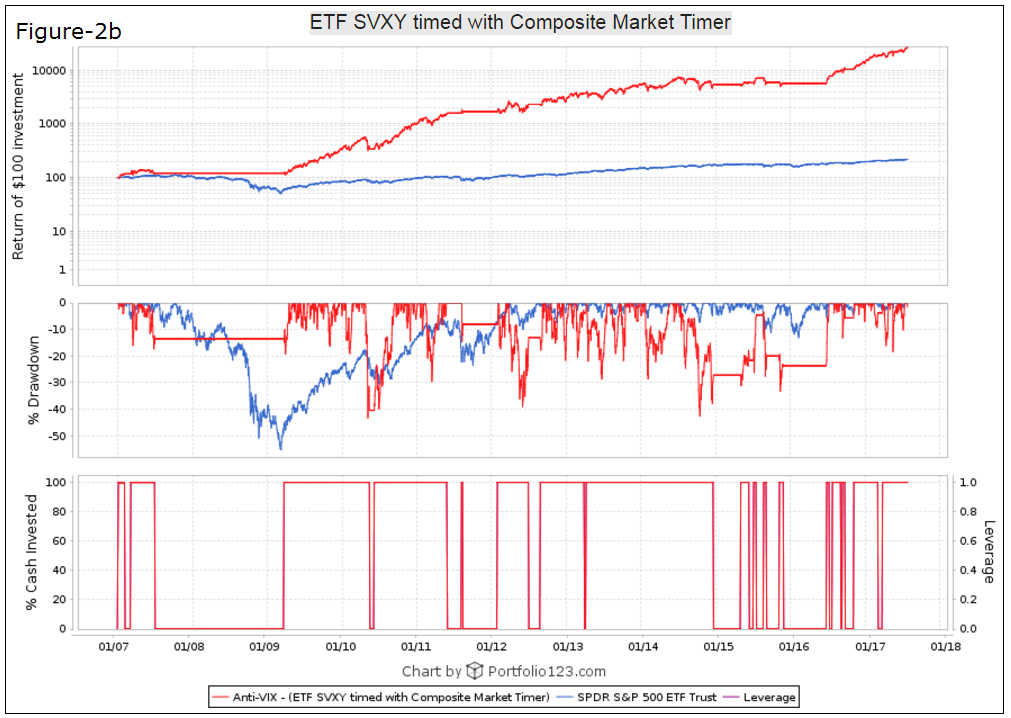 Performance of the iM-VIX Timer with SVXY

Performance of the SVXY–Cash model is satisfactory, except for three drawdowns of about -40%. A similar high return with much better drawdowns can be achieved by switching between SVXY, and either QLD or DDM, or IEF.

The model uses a simple ranking system which assumes trading ETFs, rather than investing for longer periods. The one factor system is based on the price changes over a short period. The idea being that ETFs which have experienced a decline over a short period will bounce back, reverting and doing better than ETFs which have not declined in this way.

It sells SVXY when

It sells DDM or QLD when

It sells IEF when the Composite Market Timer Score is greater or equal to 50; i.e. when up-stock market conditions prevail.

Simulated performance is shown in Figure-3 and Table-1. The annualized return is about 70% and the maximum drawdown is an acceptable -27%. The model is rebalanced weekly on the first trading day of the week using closing prices, and transaction costs were assumed as 0.1% of the trade amounts to account for commission and slippage. 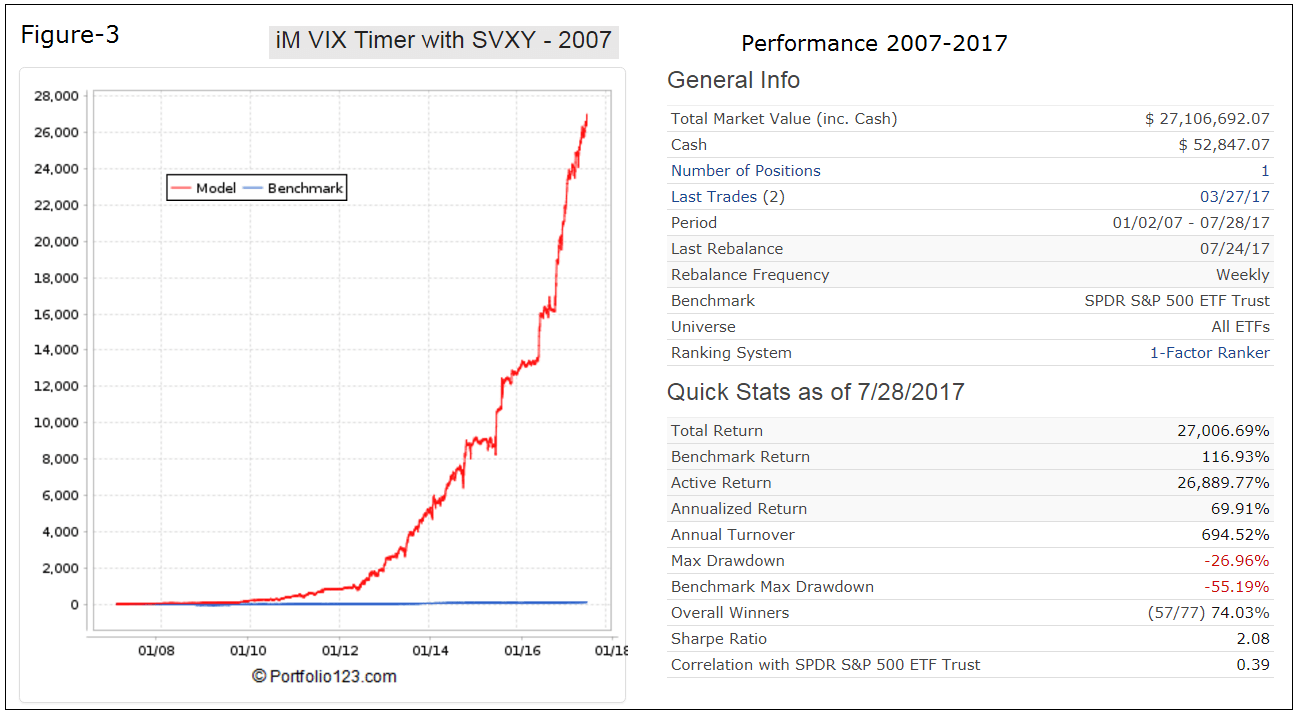 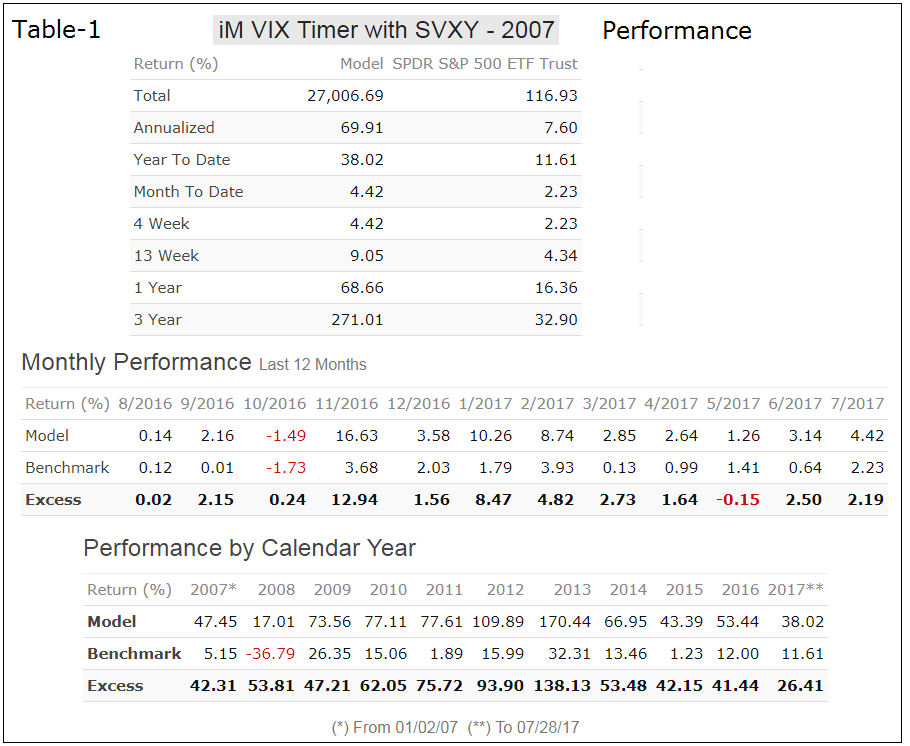 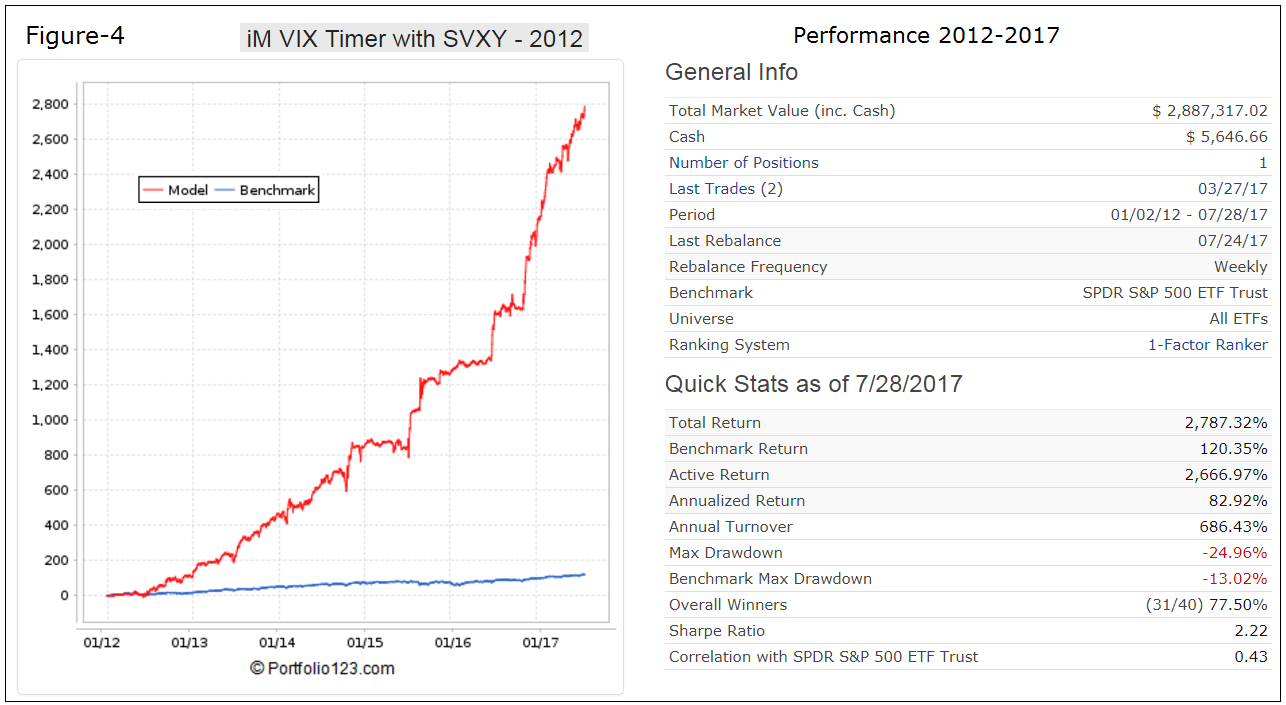 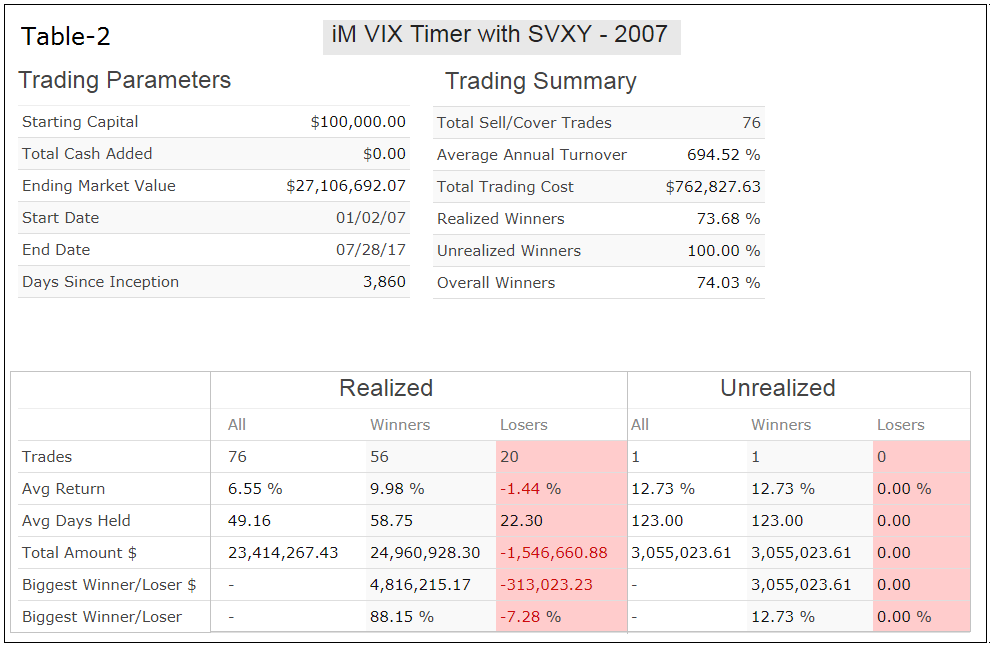 The risk measurements are in Table-3.

The iM VIX-Timer with SVXY can be followed by subscribing to it at Portfolio 123 when it will be opened for subscription at the beginning of Nov-2017.

At iMarketSignals we will provide by end August 2017 weekly signals (Gold subscription required) for a similar model, the iM-VIX Timer with ZIV. This model has a simulated annualized return of about 60% from  2011 to 2017 and  a maximum drawdown of only -16%.

Note: All performance results are hypothetical and the result of backtesting over the period 2007 to 2017. No claim is made about future performance. Backtesting involves optimizing parameters by looking at past data. Even if parameter values may be optimal going forward, future returns may generally not be as high as past returns.

Posted on Aug 4, 2017 by Georg Vrba
← 12 Comments
With reference to Section 202(a)(11)(D) of the Investment Advisers Act: We are Engineers and not Investment Advisers, read more ... By the mere act of reading this page and navigating this site you acknowledge, agree to, and abide by the Terms of Use / Disclaimer
Share This