The Capital Strength IndexSM stock qualification criteria were modified to select stocks for the iM-Capital Strength Universe. The stocks come from the Russell 1000 Index and must:

The universe is then reduced to 20 stocks by sorting eligible companies according to the Sales percent change (recent Quarter vs Quarter 1 year ago), and Average Dividend Yield over the last 60 months.

Stocks are ranked by a dividend yield-and-growth combination ranking system with four factors:

Stocks may not occupy more than 40% of any specific sector of the Global Industry Classification Standard. The only other buy rule is for stocks to have 3- and 5-year Beta values less than 1.30 during weak economic conditions as signaled by the iM Composite Market Timer.

If current positions fall out of the universe then these stocks are only sold at time of rebalancing, but stocks subject to corporate mergers or offers to buy are sold immediately.

The average annual turnover for this system from 2000 to 2017 was only about 80%. Stocks are equally weighted initially and on each rebalancing effective date. The portfolio is reconstituted and rebalanced quarterly, on the first trading day of the last week of January, April, July, and October, which corresponds within a few days to the rebalancing times of the Capital Strength Index.

Thus, very little effort is required to follow this model as there were only 77 realized trades from 2000 to 2017. Also 35% of all trades had a holding period longer than one year, providing tax efficiency if traded in an account which is not tax deferred. Additionally there were 128 minor adjustment trades resulting from rebalancing.

Table-1 shows further details of all realized trades from the backtest. The system produced a win rate of 73% and provided an average 3.9% dividend yield over the last three years. The average return for all 77 trades was 17.9%. 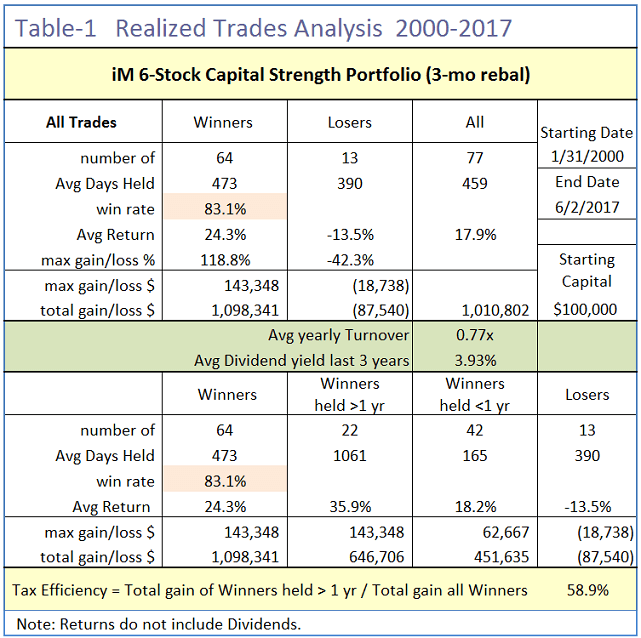 Additional performance comparisons are shown in the table below. It is apparent that for all periods the iM 6-Stock Capital Strength Portfolio significantly out-performed ETFs FTCS, the Vanguard Large-Caps, and SPY.

Performance from Jan-2000 to May-2017 is shown in Figure-1. The model produced an annualized return of 19.0% with a -25.7% maximum drawdown. An initial investment of $100 would have grown to $2,066 from Jan-2000 to end of May-2017. The maximum drawdown was significantly less than for benchmark SPY, the ETF tracking the S&P500, which can be attributed to the superior performance of Capital Strength type stocks during market downturns. 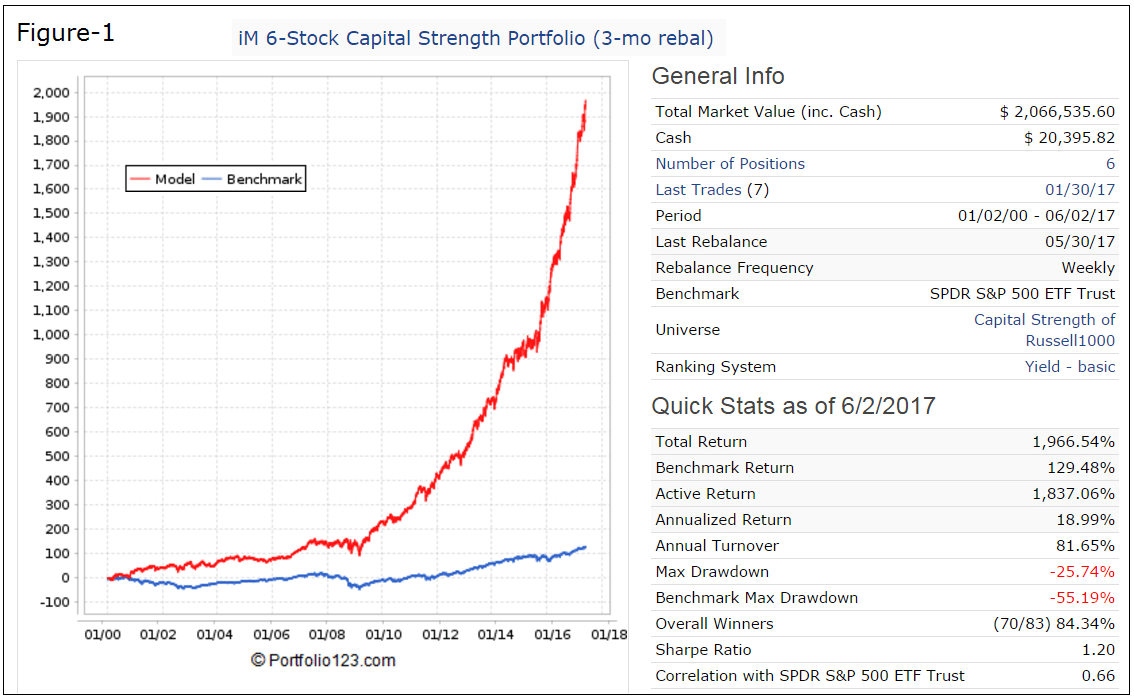 This model shows a very low average annual turnover of about 81% (0.8 x). The average holding period of a position was 459 days and share price was taken as the closing price for the day. Trading cost, including slippage, was taken as approximately 0.15% of trade amounts.

Performance from Jul-2006 to May-2017 is shown in Figure-2, which is an extract from the overall performance shown in Figure-1 beginning at the inception of ETF FTCS. The model produced an annualized return of 24.7% with a -25.7% maximum drawdown, while FTCS produced only a 9.63% annualized return with a maximum drawdown of -53.6% over this period. 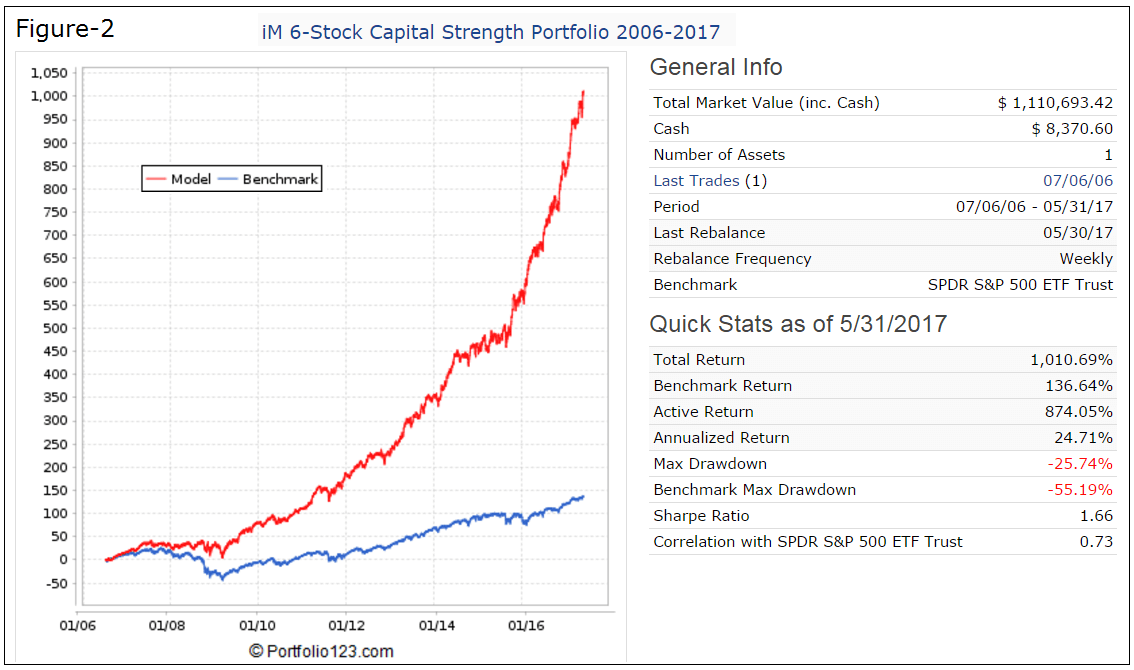 The simulated performance from Mar-9-2009 to May-31-2017 is shown in Figure-3. The start date for this period is the date when the S&P 500 was at its lowest level during the financial crisis recession.  For the approximately 8-year long backtest period the simulated annualized return was 33.2% with a maximum drawdown of -12.5% producing about three times the total return of SPDR S&P 500 ETF (SPY) with lower drawdown.

Risk measurements are from Portfolio 123. The iM 6-Stock Capital Strength Portfolio appears to be less risky than buy-and-hold of SPY, as confirmed by the low Standard Deviation and Beta, and high Sharpe- and Sortino Ratios. Alpha indicated excess returns relative to return of the benchmark SPY is about 15% annualized.

The backtest indicates above market returns with drawdowns better than for the broader market, as one would expect from a system investing in Capital Strength type stocks.

Sufficient information has been provided here to replicate this model by anybody having basic financial modelling knowhow and access to comprehensive stock data such as is available at Portfolio 123. However, on iMarketSignals we will also report the performance and the quarterly trading signals.

The portfolio of 20 stocks is reconstituted and rebalanced quarterly, on the first trading day of the last week of January, April, July, and October. Performance can be directly compared with FTCS, since there are no buy or sell rules and the model is always fully invested. 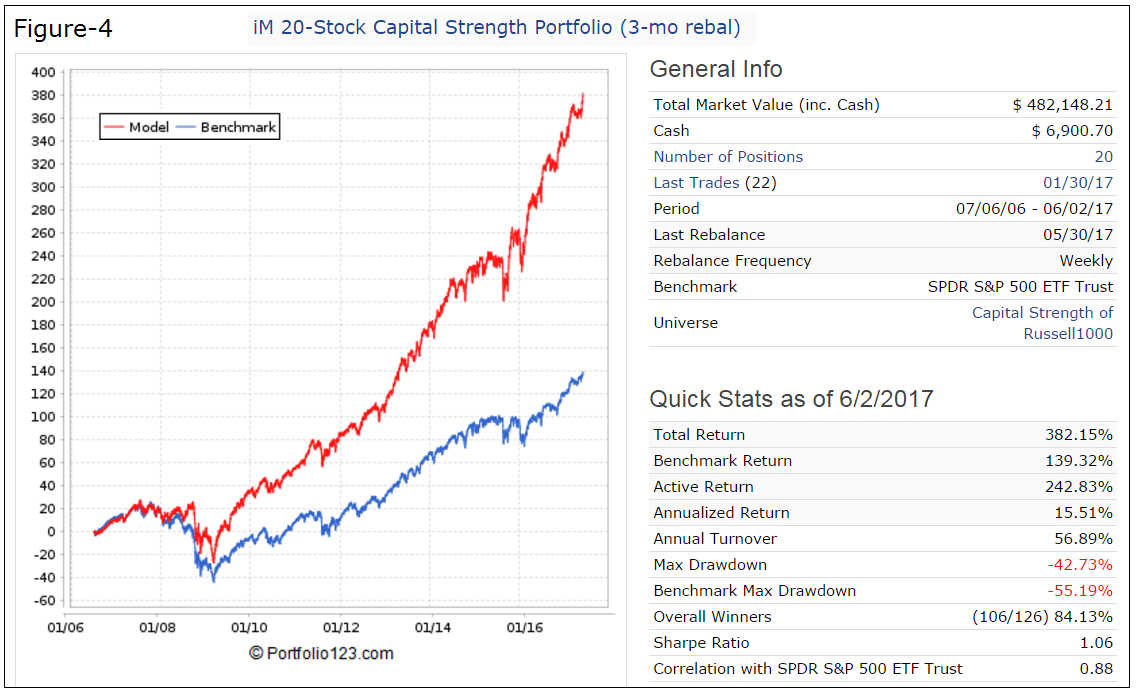 This universe has a very low average annual turnover of about 56% (0.6 x). The average holding period of a position was 530 days and share price was taken as the closing price for the day. Trading cost, including slippage, was taken as approximately 0.15% of trade amounts.

It is apparent that for all periods, except YTD, the iM 20-Stock Capital Strength Universe out-performed ETF FTCS, the Vanguard large-cap funds listed further up, and SPY by a wide margin.

Note: All performance results are hypothetical and the result of backtesting over the period 2000 to 2017. No claim is made about future performance.

Posted on Jun 7, 2017 by Georg Vrba
← 26 Comments
With reference to Section 202(a)(11)(D) of the Investment Advisers Act: We are Engineers and not Investment Advisers, read more ... By the mere act of reading this page and navigating this site you acknowledge, agree to, and abide by the Terms of Use / Disclaimer