A month ago we introduced a system holding two ETFs depending on the market climate. The model described in this article uses the same system and selects, according to market climate four Vanguard ETFs (or their corresponding mutual funds) which can be bought commission free at Vanguard. It is intended for savers who have control over asset allocations in their retirement accounts.

Pension fund contributions are typically directed to the default investment option of Target Date Funds, also known as Lifecycle Funds, or Freedom Funds, if no investment instruction is provided by employees. Unfortunately for savers the returns from these funds have been rather disappointing. On average the 10-year average annual total return to 7/29/2016 was 5.94% for the Vanguard Target Date Funds, 5.61% for the TIAA-CREF Lifecycle Funds, and 4.94% for the Fidelity Freedom Funds. (Over the same period the iM MC-Score Vanguard ETF Investor model shows a simulated 14.5% average annual return. See Figure-3 in the Appendix.)

Investors and savers can do better by changing investment allocation according to market climate. This does not involve frequent trading as there were relatively few changes of the Market Climate Score (MCS) from Jan-2000 to Aug-2016, as shown on the chart below. Periods of market weakness are defined by market climate scores MCS=3 and MCS=4 when equity funds are avoided.

Over the longer term, this simple strategy described here should always provide higher returns than buy-and-hold, and perform better than most managed or index funds.

The system selects from the five equity ETFs and the five fixed-income ETFs listed below:

The system described herewith relies on the following economic indicators:

These five indicators are used in four climate models which indicate a weak market climate when:

The MC-Score is assessed  by summing the four climate models’ scores (score is 1 when measure is true, or 0 when false).  In each market segment the investment style is altered; this model invest in four  ETFs (equal dollar weighted) as tabled below:

Note, that the overlap of ETF symbols with MC-Score groups, which significantly reduces trading.

The model is rebalanced weekly, so that market climate score changes can be acted upon. ETFs are bought and sold at the closing price on the first trading day of the week after the same market climate change signal has been generated twice in succession; i.e. for the current week and the previous week. Transaction slippage and brokerage fees were neglected because the model uses closing prices, and Vanguard ETFs can be traded free of brokerage fees at Vanguard.

In the Figures-1 and 2 the red graph represents the model and the blue graph shows the performance of benchmark SPDR S&P 500 ETF Trust ETF (SPY). 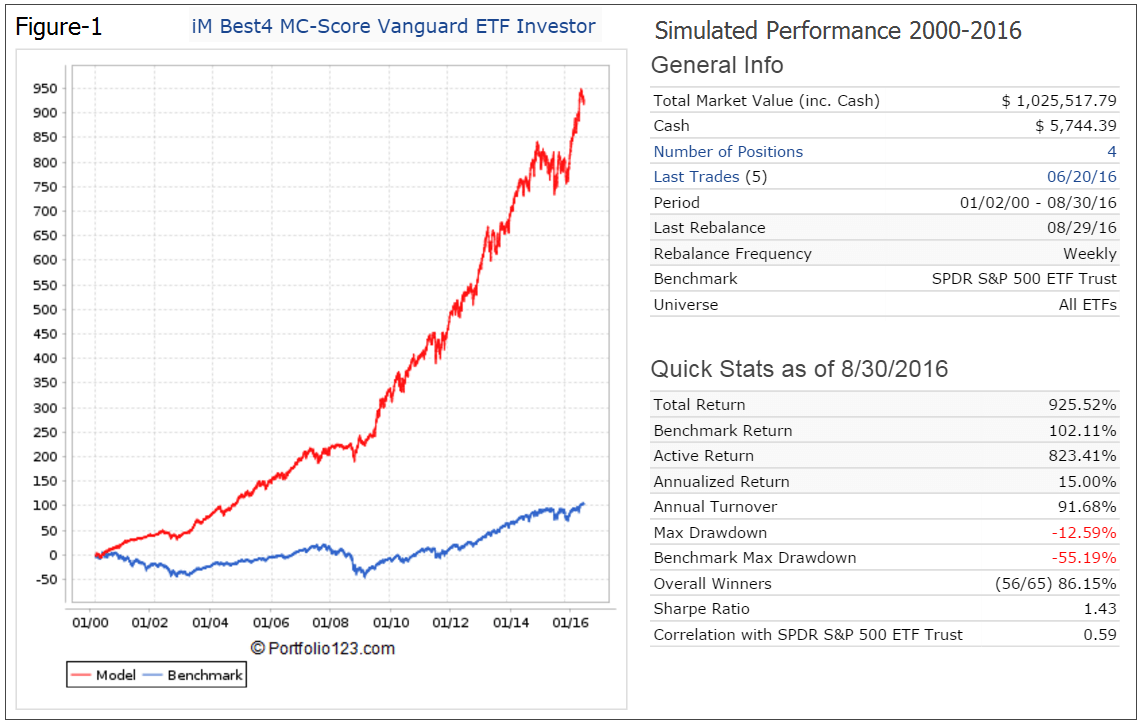 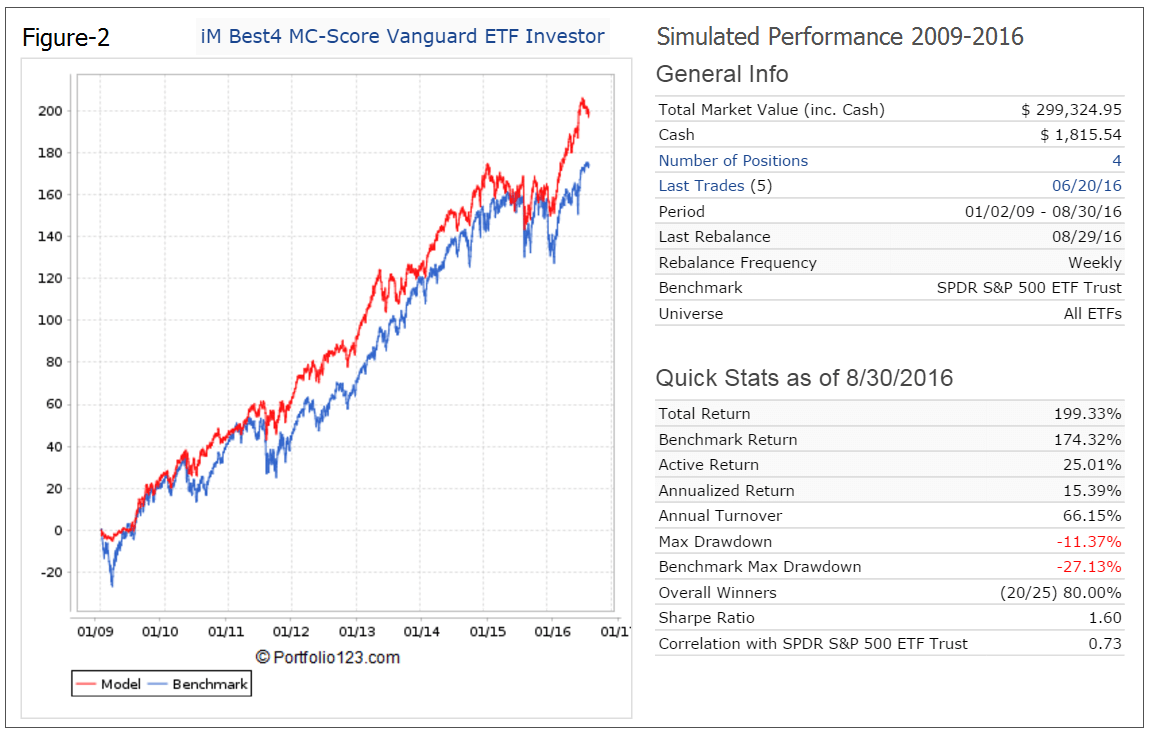 The backtests confirm that a successful strategy would be to invest in ETFs having styles that are applicable to prevailing market climate as defined by the Market Climate Score System.

This model can be followed live at iMarketSignals, where it will be updated weekly.

Table-1 lists the annualized returns, maximum drawdown, and various risk measurements for the trailing three years and for the full backtest period. 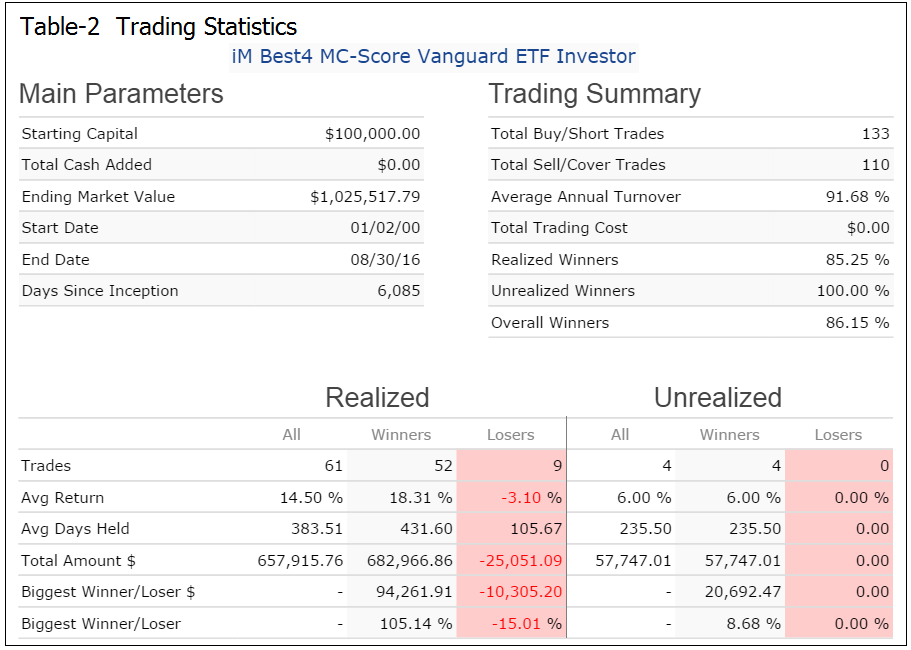 The average holding period for all Realized Trades was 383 days, and so far the current holdings have been held for 235 days. 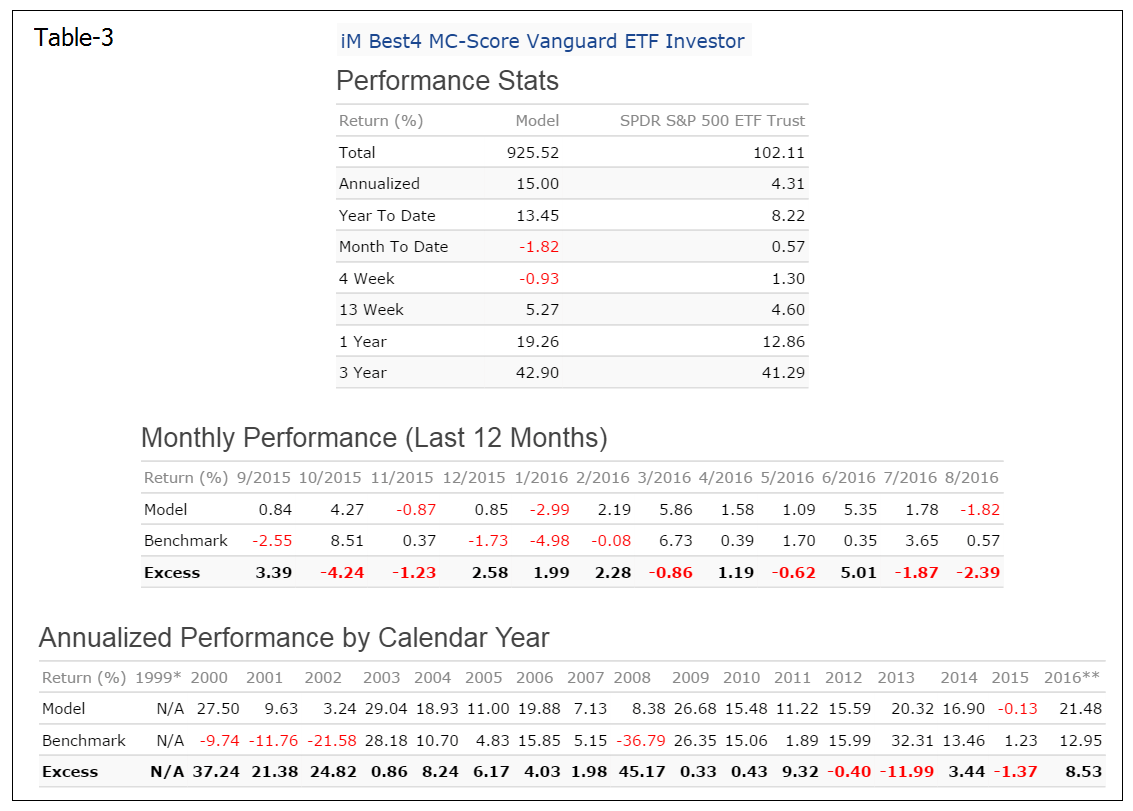 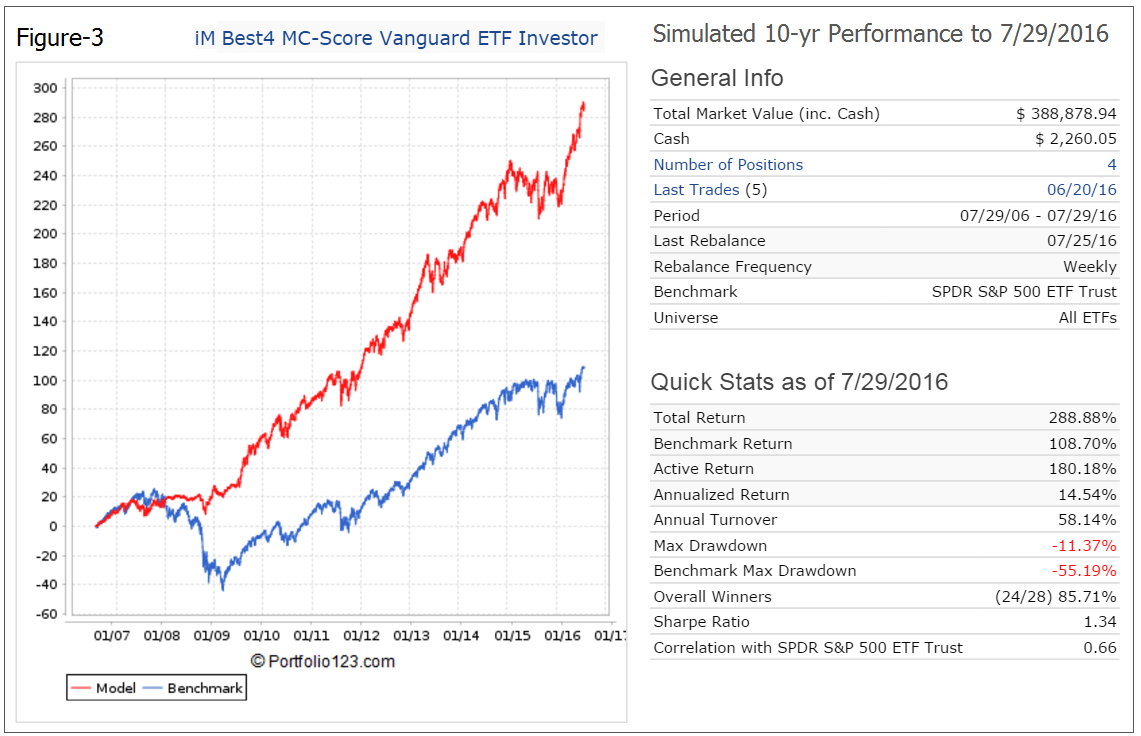 One should be aware that all results shown for the Market Climate Score System are from a simulation and not from actual trading.

All information for this model is back-tested, based on the methodology that was in effect on the launch date. Back-tested performance, which is hypothetical and not actual performance, is subject to inherent limitations because it reflects application of a methodology and selection criteria in hindsight. Actual returns may differ from, and be lower than, back-tested returns.

All results are presented for informational and educational purposes only and shall not be construed as advice to invest in any assets. Backtesting results should be interpreted in light of differences between simulated performance and actual trading, and an understanding that past performance is no guarantee of future results. All investors should make investment choices based upon their own analysis of the asset, its expected returns and risks, or consult a financial adviser.

Posted on Sep 1, 2016 by Georg Vrba
← 9 Comments
With reference to Section 202(a)(11)(D) of the Investment Advisers Act: We are Engineers and not Investment Advisers, read more ... By the mere act of reading this page and navigating this site you acknowledge, agree to, and abide by the Terms of Use / Disclaimer