Is the Stock Market Overvalued? Estimating Returns to 2020 and Beyond

About two and a half years ago it was fairly obvious that a major bull market had commenced in 2009 (Appendix A).  Also a statistical analysis of the inflation adjusted historic data of the S&P-Composite from 1871 to 2012 indicated the same then. Since August 2012 the S&P500 with dividends has gained a real 51%. So what further gains can we expect, if any?

Nobody knows, and the best we can do is to use the historic data (which is from Shiller s S&P series) to guide us to make estimates for the future. From the real price of the S&P-Composite with dividends re-invested (S&P-real) one finds that the best fit line from 1871 onward is a straight line when plotted to a semi-log scale. There is no reason to believe that this long-term trend of S&P-real will be interrupted.  S&P-real and the best fit line together with its 95% prediction bands are shown in Figure-1, updated to December 2014. (See appendix B for the equations.)

Also shown is the Cyclically Adjusted Price to Earnings Ratio P/E5 (which is the S&P-real divided by the average of the real earnings over the preceding 5 years). P/E5 is currently at a level of 23.5, down from the Jan-2014 level of 26.1.

One observes that whenever S&P-real “bounced-off” the lower extreme of the prediction band and subsequently P/E5 moved from below to above 13.4 a bull market always followed. The last time this occurred was in March 2009. Since then S&P-real has “only” gained about 180%. Comparing this to previous post-bounce-off-gains (which ranged from 410% to 2520%) then the possibility exists of further gains to come. 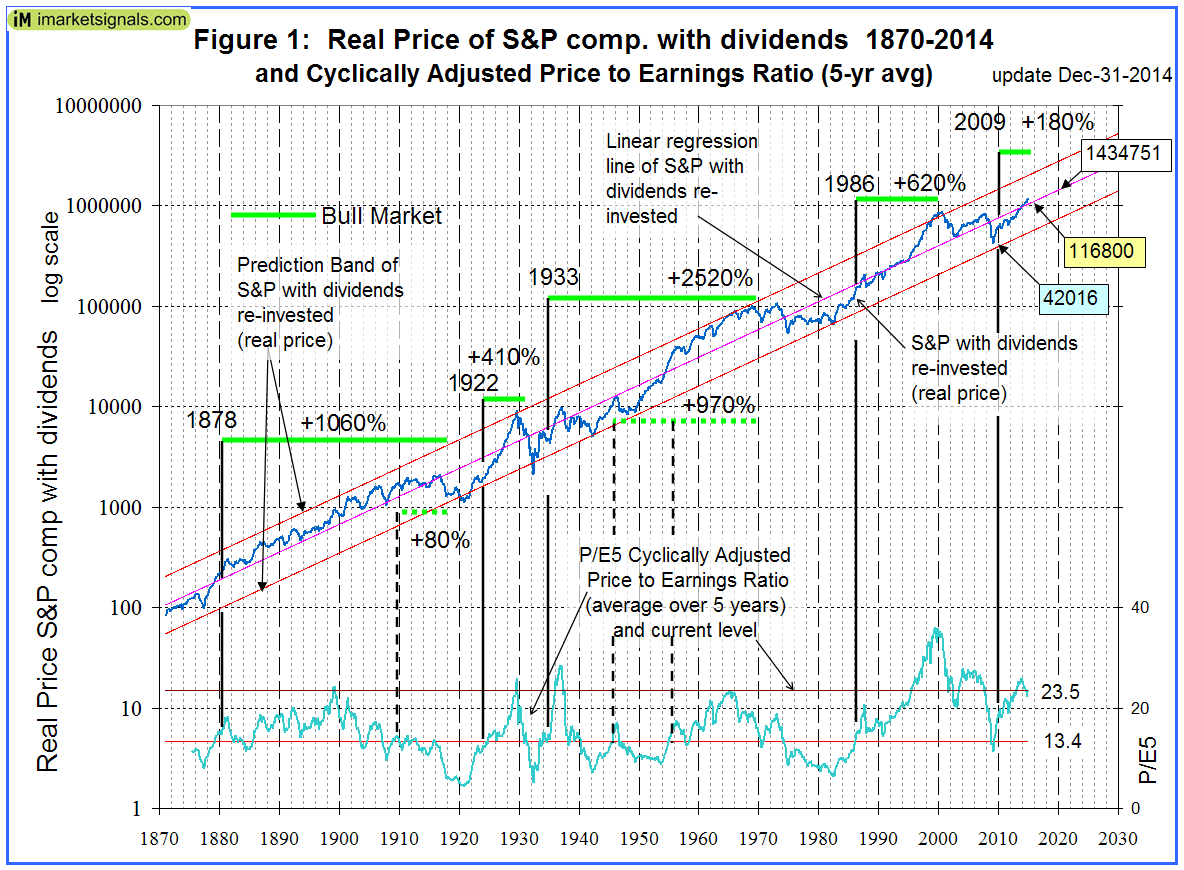 Thus the historic trend forecasts a probable gain of about 20% for S&P-real over the next five years. The worst scenario would be a possible loss of about 50%, and the best outcome would be a 90% gain from the current level.

Widely followed commentators, such as Butler Philbrick & Associates (B|P) and Hussman warned us at the end of 2011 that the markets then were expensive and overbought, and that one could only expect very low returns going forward over periods as long as 20 years.  Their statistical analyses asserted a very high probability of low returns to stocks in the future.  Figure-2 shows the current situation in more detail and also includes the levels of the S&P-real as per (B|P) forecast, indicated by the red markers connected by the dashed red line. 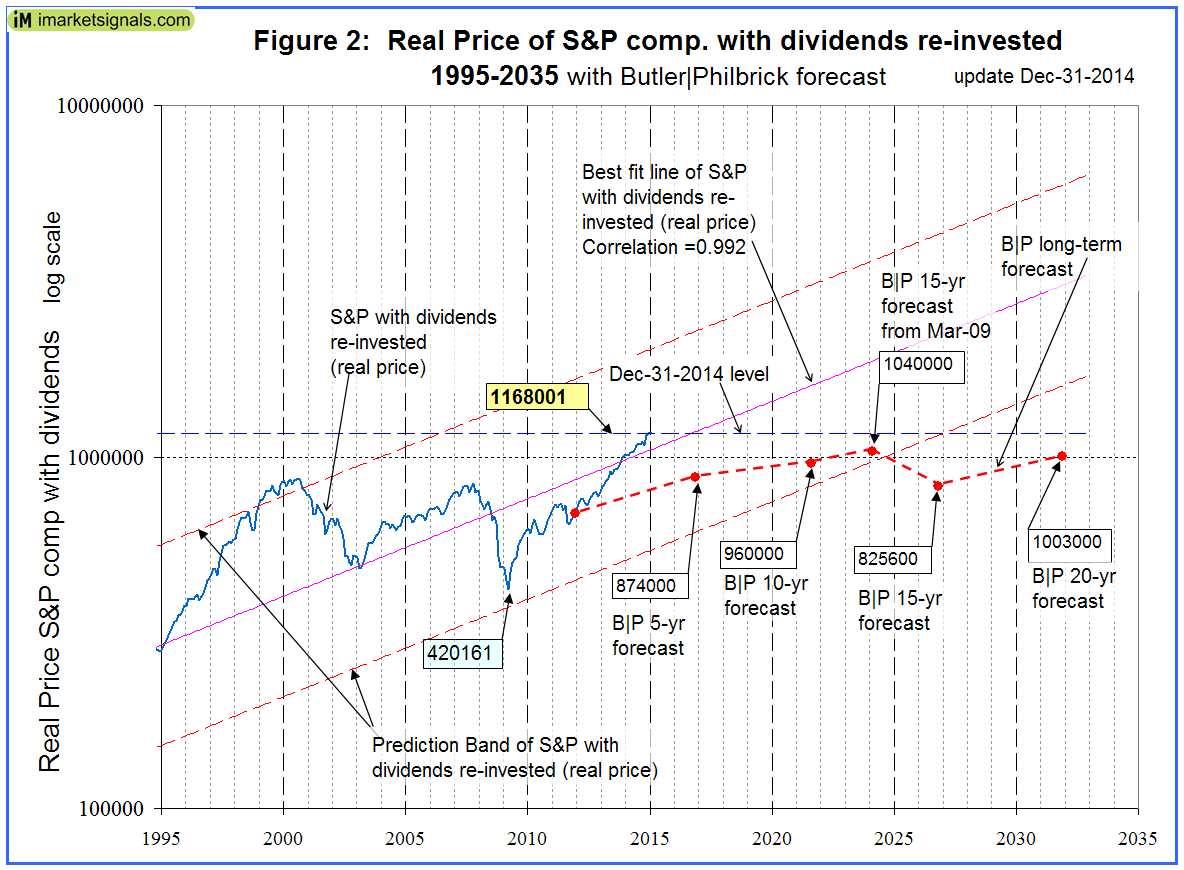 From December 2011 onward B|P predicted a real annual return for the stock market of only 1.46% for 15 years, and 2.08% for 20 years (Table-1 in their article and Appendix C below).  Also they forecasted a 6.48% annual return from Mar-2009 to Mar-2024 (Table 2 in their article).  One can see that the March 2024 level is quite possible as it is just above the lower extreme of the prediction band, but it would appear that the December 2026 and 2031 forecasts are overly pessimistic.

One will only know at the end of the various forecast periods whether the analyst’s predictions hold up.  In two years we will know whether B|P’s 5-year forecast was correct; if so, then the S&P-real will have to lose 25% from its current level, a decline that is not impossible.

For the December 2031 forecast value to be correct the S&P-real would have to decline by 14% over the next 17 years. There was only one previous period since 1871 when S&P-real had a negative return over 17 years.  That was the period 1965 to 1982 when yields of the 10-year Treasuries increased from about 2% to 15% and the Consumer Price Index tripled from 31 to 98, increasing at a 7% average annualized rate.  However, without inflation adjustment the S&P with dividends actually increased by about 150% over the same period.  So unless we experience very high inflation over the next 17 years it is unlikely that this forecast will be realized.

One can see from Figure-2 that the current level of SP-real is already significantly higher than all the forecast levels from B|P.  Also in Hussman’s December 2011 commentary “Hard Negative” he estimated “that the S&P 500 is likely to achieve an average total return over the coming decade of about 4.8% annually”.  This would have put the S&P 500 at 2,072 by the end of 2021. Currently the S&P 500 is already higher than the 10 year forecast level.  This shows that long-term forecasts are unrealistic indicators for shorter periods and they are probably unreliable over longer periods as well.

One observes from Figure-1 that presently S&P-real is near where it should historically be; its level is just above the long-time trend line.

The P/E5 is at a high level of 23.5 but it is lower than the Jan-2014 level of 26.1.  The relatively high level may indicate an overvalued market, with the graph of P/E5 having a downward slope while the market has had a rising trend since 2009.

Similar conditions prevailed only 4-times in the past:  in 1929, 1937, 2003 and 2008.  Only after one occasion, in 2003, was it followed by a significant market advance. However, at that time the S&P-real had been declining already for several years from the upper extreme of its prediction band.  At all the three other occasions the S&P-real had previously peaked, and the market continued to decline for several years thereafter.

Long-term investors should also heed Shiller’s Dec-2013 warning, and consider the high level of the Shiller P/E10 ratio, currently at about 26.5. He states that the plot of P/E10  “confirms that ……Long-term investors would be well advised, individually, to lower their exposure to the stock market when it is high, ….., and get into the market when it is low.”  The plot shows that for a P/E10 of 25 one can expect a 10-year annualized return of between -5% and +5%.  So caution is certainly indicated with the P/E10 at a level of about 26, but positive stock market returns are still possible over the next 10 years.

The current relatively high P/E5 and P/E10 levels suggest moderate longer-term returns.  One should consider low frequency market-timing models to protect one’s investments.  Also during down-market periods low volatility stocks should decline less than the broader market, and therefore could provide exposure to the stock market with potentially less risk.  It is also important to know when a recession is looming, as stocks usually decline during recession periods.

Posted on Jan 2, 2015 by Georg Vrba
No Comments
With reference to Section 202(a)(11)(D) of the Investment Advisers Act: We are Engineers and not Investment Advisers, read more ... By the mere act of reading this page and navigating this site you acknowledge, agree to, and abide by the Terms of Use / Disclaimer