Home › blogs › Is the TIAA Real Estate Account about to Roll Over?

Is the TIAA Real Estate Account about to Roll Over?

The TIAA Real Estate Account, despite showing good returns over the last four years, is a typical example of a fund with disappointing performance over the longer term. In order to maximize one’s returns one has to know when to enter and exit the fund. My analysis shows that TIAA Real Estate may peak in the second half of 2014 which would provide an early indication to reduce one’s exposure. A firm sell signal would arise when its 1-year rolling return moves below 0%.

This $17B fund provides direct ownership interests in commercial real estate, offering diversification beyond traditional equity and fixed-income investments with guaranteed daily liquidity. The daily value is determined by an arcane formula resulting in very low volatility of the fund’s unit value, as evidenced by the smooth performance graph of TIAA Real Estate. Performance over the last 14 years is shown in Figures 1 and 2, and additional performance information is in the Appendix. 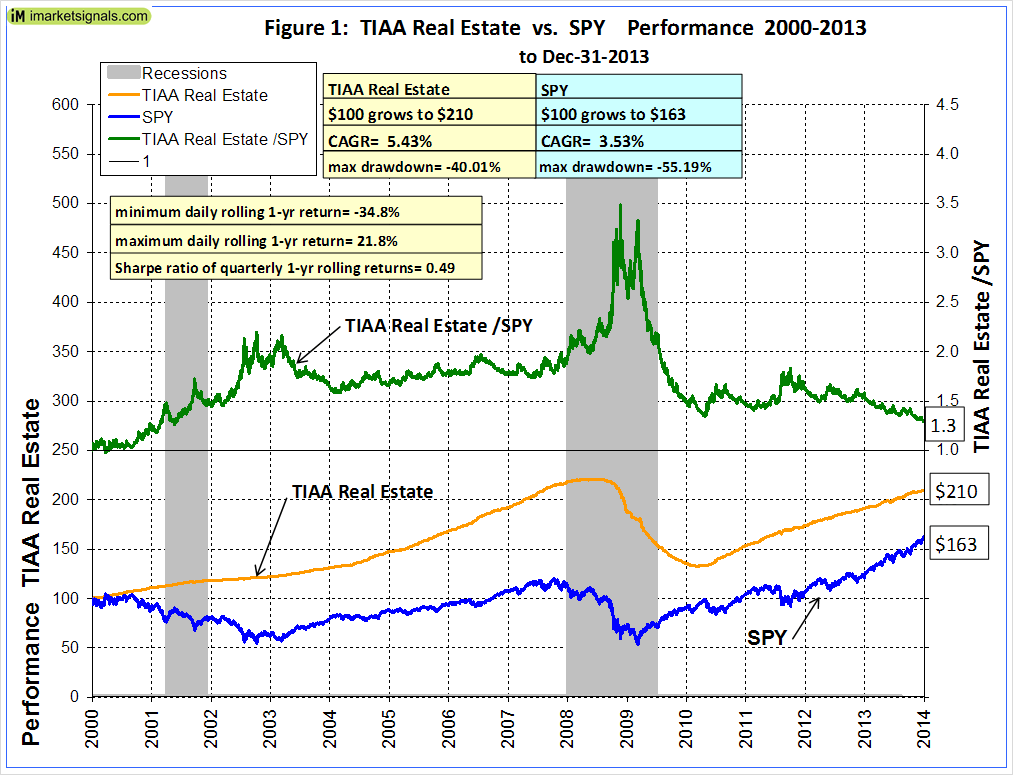 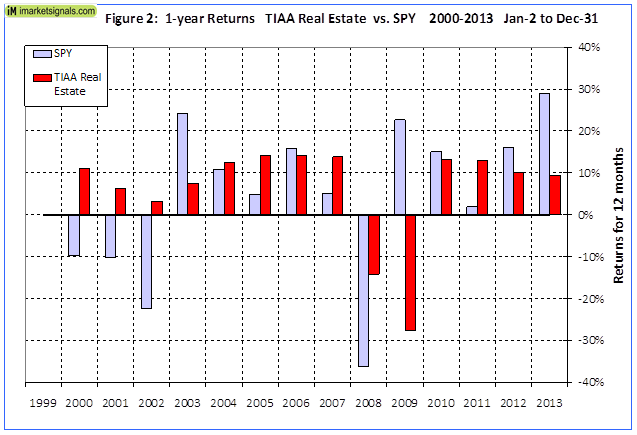 For the last four years TIAA Real Estate provided a steady annual return ranging from 13.3% to 9.3% from 2010 to 2013, and the indication is that it will continue to provide a good return for some time to come; the latest 1-month return listed on the TIAA-CREF website is 0.93%. These are good returns considering the prevailing low interest rate environment and it is no coincidence that TIAA recently limited the maximum investment in this account to $150,000 per participant. The question arises – how long can these steady returns last?

It is obvious from Figure 1 that one should have exited TIAA Real Estate during the middle of 2008 and re-entered it again two years later. But how would one know this at the time?

As a comparison the Vanguard $35B REIT Index Fund (VGSIX) invests in listed real estate investment trusts which makes this fund subject to daily market fluctuations. My analysis shows that VGSIX leads TIAA Real Estate by about 14 months and that the latter may peak shortly after the middle of 2014.

In Figure 3 below the performance of both funds are shown over the last 15 years. It is immediately apparent that VGSIX formed a peak in 2007 and a trough in 2009, about 14 months before TIAA Real Estate did the same. More recently in the second quarter of 2013 VGSIX may have peaked again. If this is indeed the case then TIAA Real Estate could probably peak in July-August 2014. A definite exit signal would be given when the 1-year rolling return moves below 0%, as shown in Figure 4 in the Appendix. 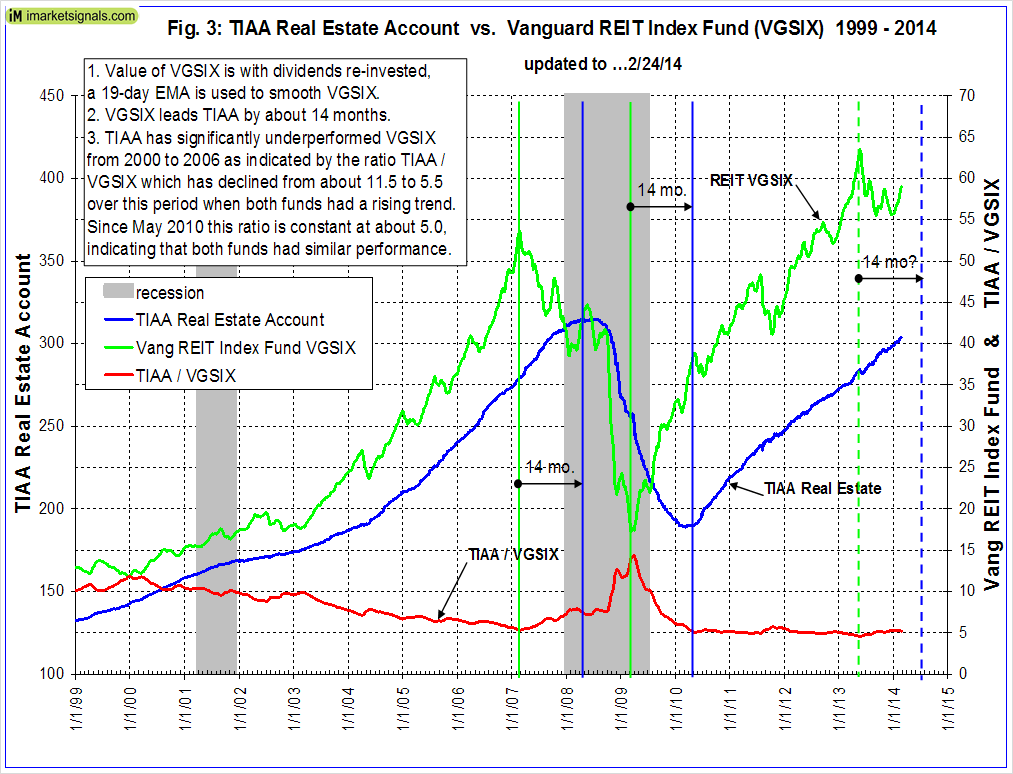 It is interesting that from 2010 to 2014 the TIAA Real Estate Account performed as well as VGSIX, as indicated by the almost horizontal ratio graph TIAA / VGSIX. However, its performance from 2000 to 2007 did not match that of VGSIX; over that period TIAA Real Estate lost about 50% relative to VGSIX.

Rergular updates of TIAA Real Estate and rolling 1-year returns will be added to our monthly updates. This should provide early warning of an imminent exit signal before a possible major decline of TIAA Real Estate, as occurred in 2008 to 2010 when it lost about 40% of its value. 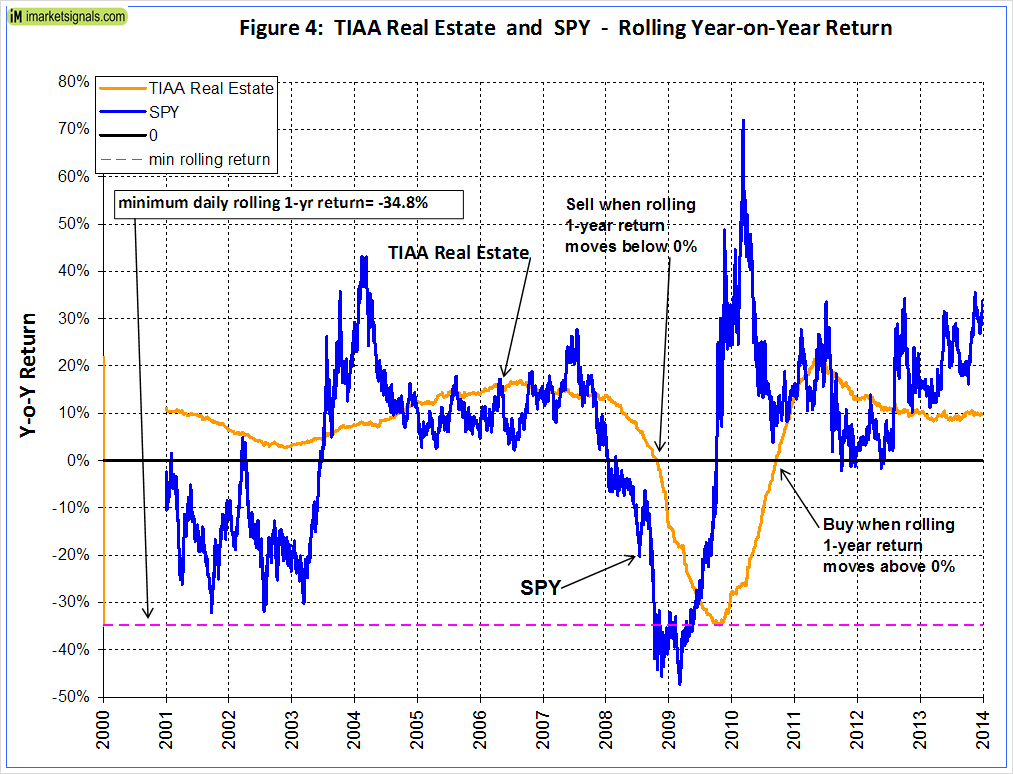 To simulate saving for retirement, terminal values were calculated to the end of May 2013 for annual hypothetical investments of $1 in the TIAA Real Estate Account. Starting with a dollar during each of the 13 years from 2000 to 2012, one would have invested a total of $13 cumulatively by the end. Summing the 13 terminal values, this strategy would have netted this dollar-per-year investor $17.61 (or a real $14.25) at the end of 13 years. Furthermore, the lowest annualized return, for any of the 13 time periods was -2.1% and the average for all the periods was only 4.9%. This is shown in Table 2 below.

Following a buy-and-hold strategy in SPY, one would have had $20.42 (Table 1), about 16% more than what the TIAA Real Estate Account produced. 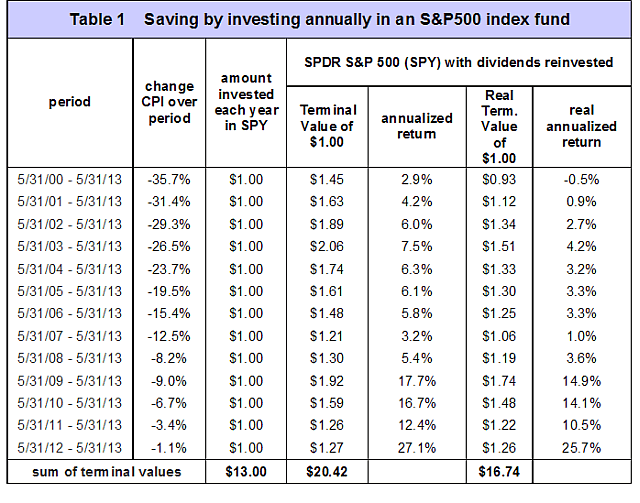 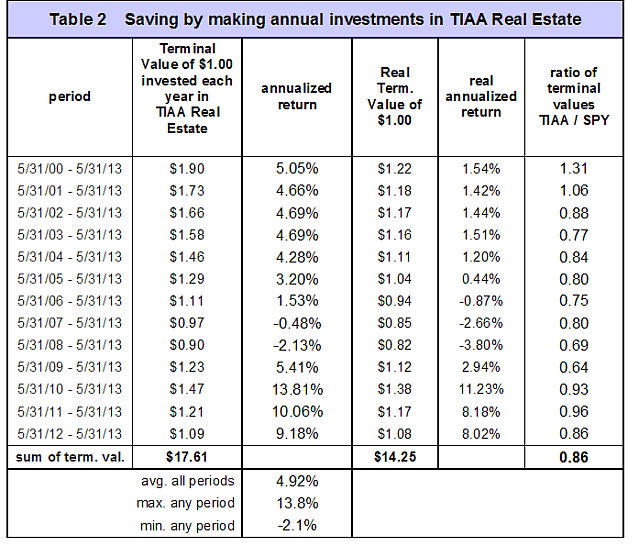 The last column of Table 2 shows that only the first two investment periods provided higher terminal values than SPY. One would have done better saving for retirement by simply investing in an index fund that tracks the stock market than by making annual investments in the TIAA Real Estate Account.

TIAA–CREF is a financial services organization with $564B assets under management serving 4.8 million active and retired employees from the academic, research, medical and cultural fields.

The TIAA Real Estate Account is not the only fund with a poor performance record in the TIAA-CREF lineup. As discussed in this article the CREF Stock Variable Annuity Account has also underperformed the Vanguard 500 Index Fund VFINX which tracks the S&P500. There was not a single period from 1992 to 2012 when the sum of the terminal values for recurring annual investments into the CREF Stock Account would have exceeded the sum of the terminal values for the same amounts placed into the index fund VFINX.

4 comments on “Is the TIAA Real Estate Account about to Roll Over?”

Posted on Feb 27, 2014 by Georg Vrba
← 4 Comments
With reference to Section 202(a)(11)(D) of the Investment Advisers Act: We are Engineers and not Investment Advisers, read more ... By the mere act of reading this page and navigating this site you acknowledge, agree to, and abide by the Terms of Use / Disclaimer