Knowing when the U.S. Economy is heading for recession is paramount for successful investment decisions. We have designed the weekly iMarketSignals Business Cycle Index (BCI) so it would have provided early reliably warnings for the past seven recessions. We achieved recessions leads averaging 11 weeks, all with similar lengths. The absence of false positives, for the analyzed time period of 1967 to 2013, enhances the quality and reliability of the recession warnings.

The project to design a new leading index was initiated by the necessity to replace the Economic Cycle Research Institute’s Weekly Leading Index (WLI) with an indicator with good and reliable recession forecasting characteristics. Refer to Why is M2 Still a Component of ECRI’s WLI? and Does ECRI’s WLI Remain a Usable Indicator?

We developed BCI from the following basic economic data:

The data-set is available from 1967 onwards, a timeframe that encompasses the last seven recessions. When combining the component for the index the “real time” aspect was considered, i.e. the data was only incorporated into the index at its publication date.
The BCI was not specifically designed to be a measure of the strength or weakness of the economy; it was designed to provide high probability recession forecasts (based on past performance). The various parameters of the BCI model, with which the input data are preconditioned and combined, were adjusted to provide the best recession capturing characteristics to the growth rate of BCI, with emphasis on getting the beginning of recessions right.

A superior measure for cyclical analysis is the 6-month smoothed annualized growth rate of an index. (See appendix A for the formula.) We used this method in our approach to obtain BCIg, the growth of BCI plus 6.0% to make zero the recession trigger. This provided recessions leads of 11 weeks on average with a standard deviation of 2.6, giving a Sharpe ratio of 4.2 (See Table 1). This high ratio indicates that all the leads are of similar length. Furthermore, using this method on the historical data we note that there are no false positives, which is also evident form Figure 1 that plots the BCI and BCIg from1967 onwards.

The BCI will be maintained and updated every Thursday on the our dedicated page, accessible through the BCI menu item on the black menu bar in the heading section of every page. 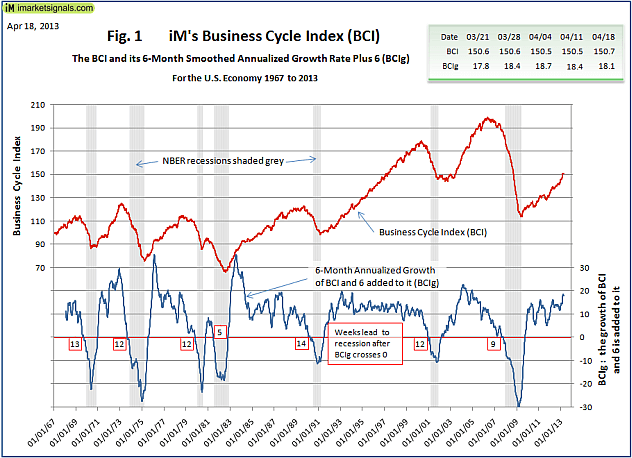 Posted on Apr 22, 2013 by Anton Vrba
← 5 Comments
With reference to Section 202(a)(11)(D) of the Investment Advisers Act: We are Engineers and not Investment Advisers, read more ... By the mere act of reading this page and navigating this site you acknowledge, agree to, and abide by the Terms of Use / Disclaimer