Approximately five years ago we launched at iMarketSignals the four quarterly displaced iM-Best12(USMV)Qx,  x=1, 2, 3 or 4, investor models each holding 12 positions. The purpose of these models was to check whether our hypothesis (that a portfolio of top ranked USMV stocks in each of the four models will provide higher returns than the underlying ETF)  is supported by the actual performances of the models over a longer period of time.

USMV’s inception was Oct-20-2011, and by end of Jun-2014 when we launched the first quarterly model the fund’s net assets were about $2.7-billion. Now, five years later, the fund’s current net assets had increased 10-fold to $28.6-billion, attesting to this ETF’s popularity.

Over the last five years the performance of iM-Best12(USMV)Q1+Q2+Q3+Q4-Investor resulted in an excess return of 34.8% over USMV and 54.5% over SPY, thus corroborating our initial hypothesis. (Figure-3 in the Appendix-A refers.)

Over time the holdings of the four models have converged to hold only 18 different stocks between them, so future performance of each of the models is expected to be very similar. There is not much to be gained by following four similar models and we will be replacing them with the iM Min Volatility(USMV)-Investor. This model holds 10 equal weighted stocks from the iShares MSCI USA Minimum Volatility ETF (USMV), rebalanced every 13 weeks, and retains a position for a one year minimum period. Every three months the stock universe from which stocks are selected will be updated to correspond to the then current holdings of USMV.

We have backtested this model from Jan-2013 onward with point-in-time data of USMV’s holdings. The simulated performance is shown in Figure-1 relative to the benchmark SPY. Over 6.5 years the model would have produced about double the total return of SPY. Estimated trading cost and slippage were taken into account.

Since inception the simulation shows an annualized return of 22.0% versus 14.3% for SPY and an annual turnover ratio of 60%. There were only 38 realized trades with an average holding period of 481 days. 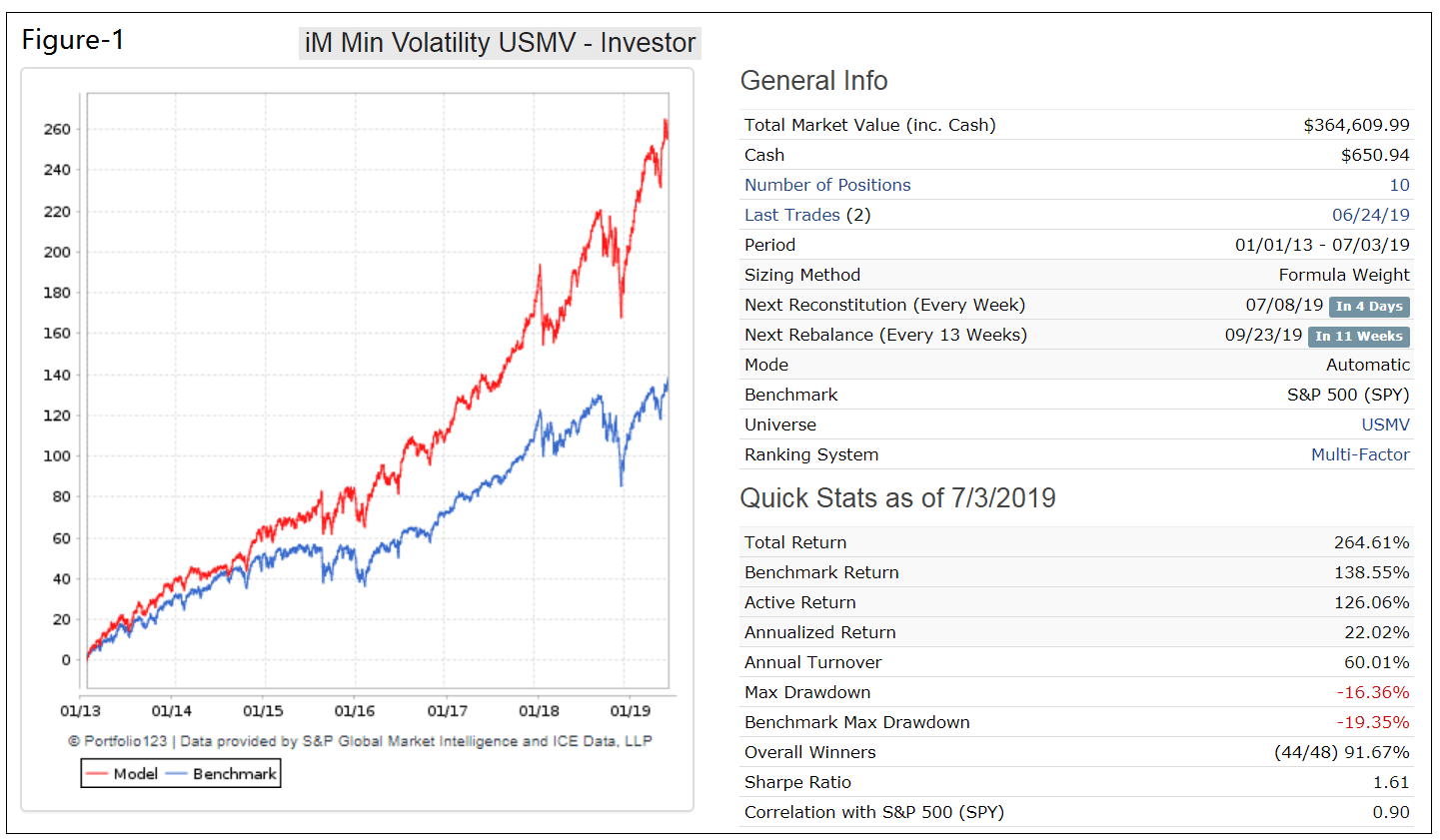 The model currently only holds large-cap stocks in five sectors, as shown in Figure-2. 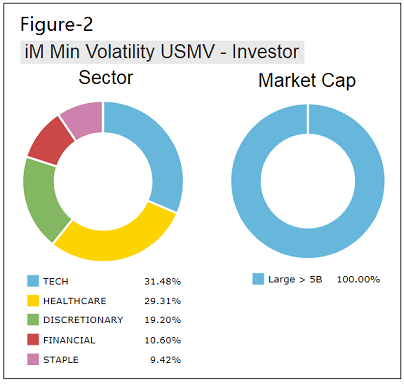 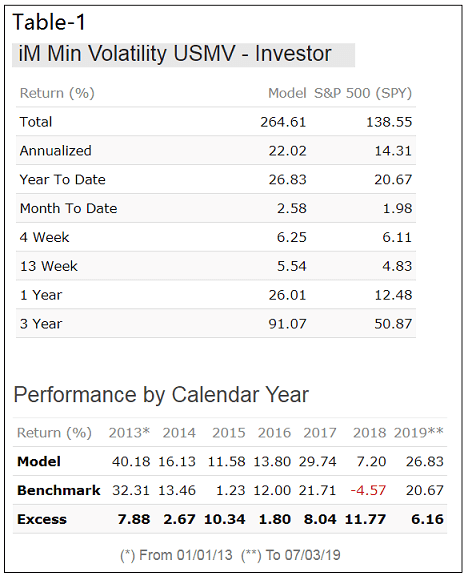 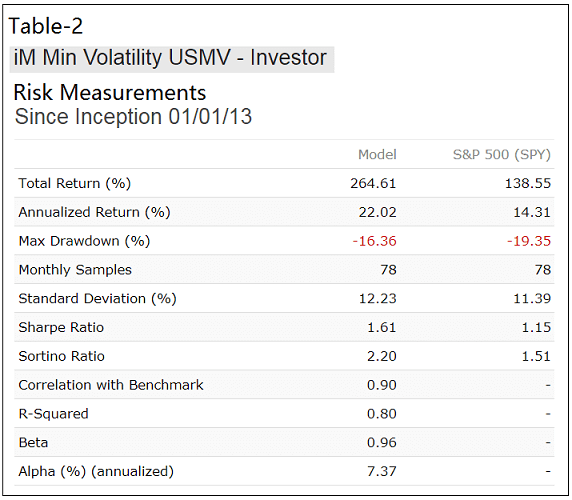 Note the buy dates. The minimum one year holding period is timed from the dates listed.

One should be aware that all results shown are from a simulation and not from actual trading. They are presented for informational and educational purposes only and shall not be construed as advice to invest in any assets. 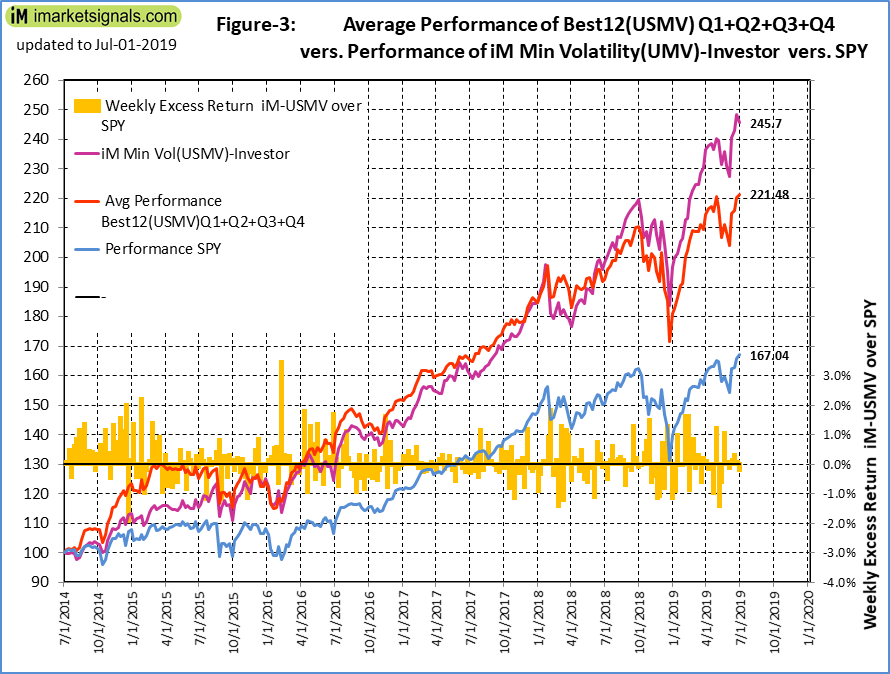 Posted on Jul 5, 2019 by Georg Vrba
← 30 Comments
With reference to Section 202(a)(11)(D) of the Investment Advisers Act: We are Engineers and not Investment Advisers, read more ... By the mere act of reading this page and navigating this site you acknowledge, agree to, and abide by the Terms of Use / Disclaimer