This is an update to our series of articles started in 2012 assessing market valuation and estimating forward stock market returns. The most recent previous update was for September 2022.

The December 2021 update concluded that the then prevailing condition of overvaluation suggested zero returns from stocks to the end of 2028 and the danger of an imminent major downturn for equities. By end of February 2022 the S&P 500 was 5% lower and since then the index has declined further as predicted in the March, July and September 2022 updates, now having declined a total of 20% from the December 2021 average. .

Nobody knows, and the best one can do is to use the historic data (which is from Shiller’s S&P series) to guide us to make estimates for the future. From the real price of the S&P-Composite with dividends re-invested (S&P-real) one finds that the best-fit line from 1871 onward is a straight line when plotted to a semi-log scale. There is no reason to believe that this long-term trend of S&P-real will be interrupted.

S&P-real and the recalculated best fit line together with its 95% prediction band lines are shown in Figure-1, updated to end of October 2022. (See the appendix for the equations which now includes an additional 10 years of data in the regression analysis after July-2012.) 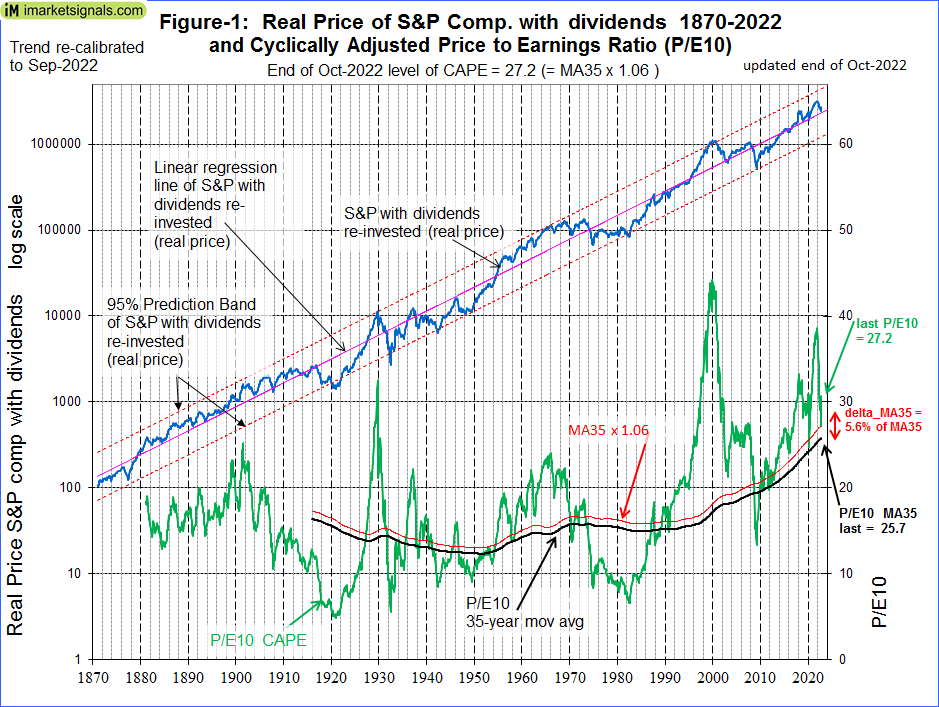 Also shown in Figure-1 are the CAPE-ratio (which is the S&P-real divided by the average of the real earnings over the preceding 10 years) and its 35-year moving average (MA35), having end of October 2022 values of 27.2 and 25.7, respectively. Thus the falling CAPE is 6% above its MA35 and the S&P-real has now sharply declined from where it was at the end of 2021. 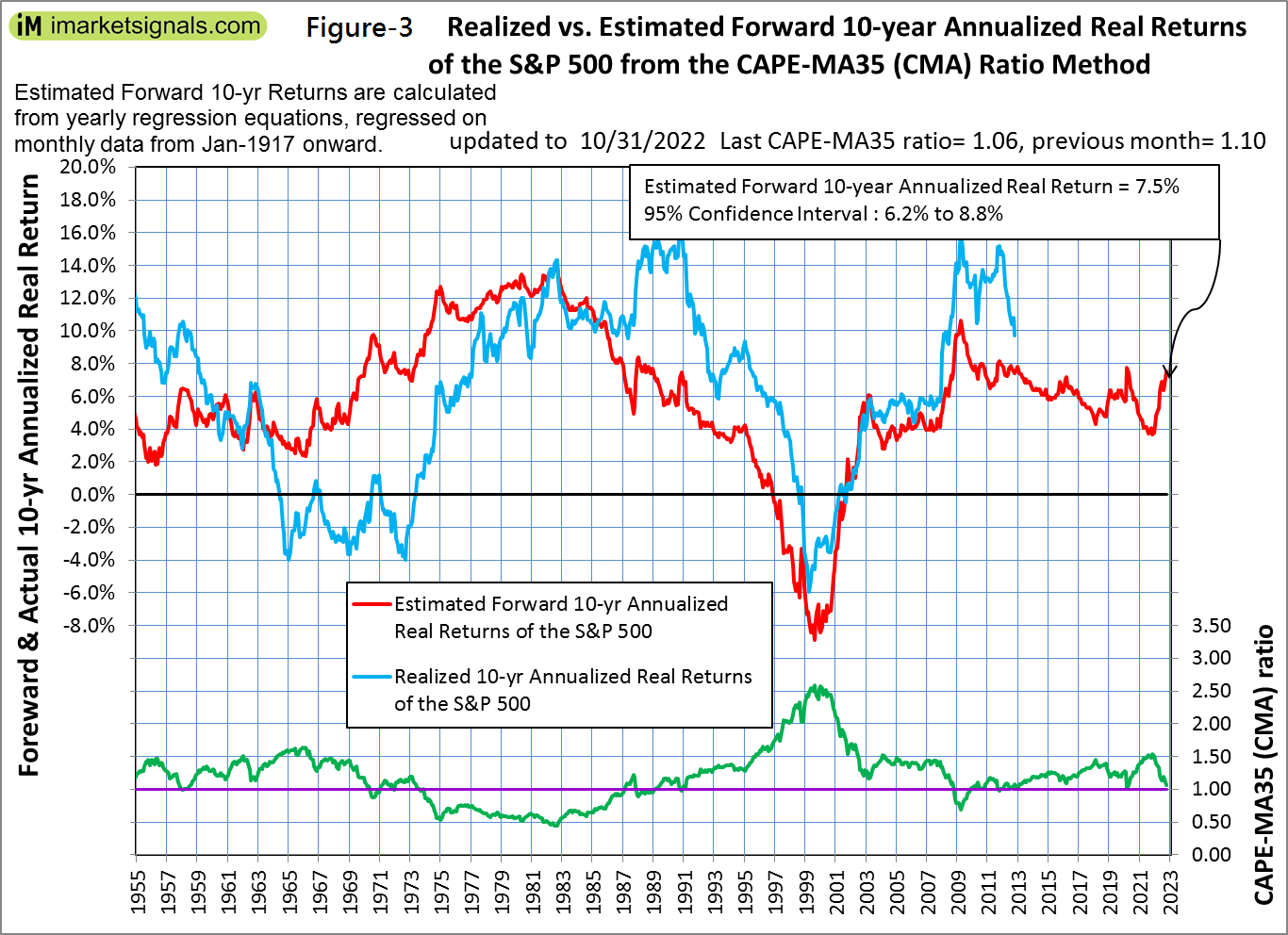 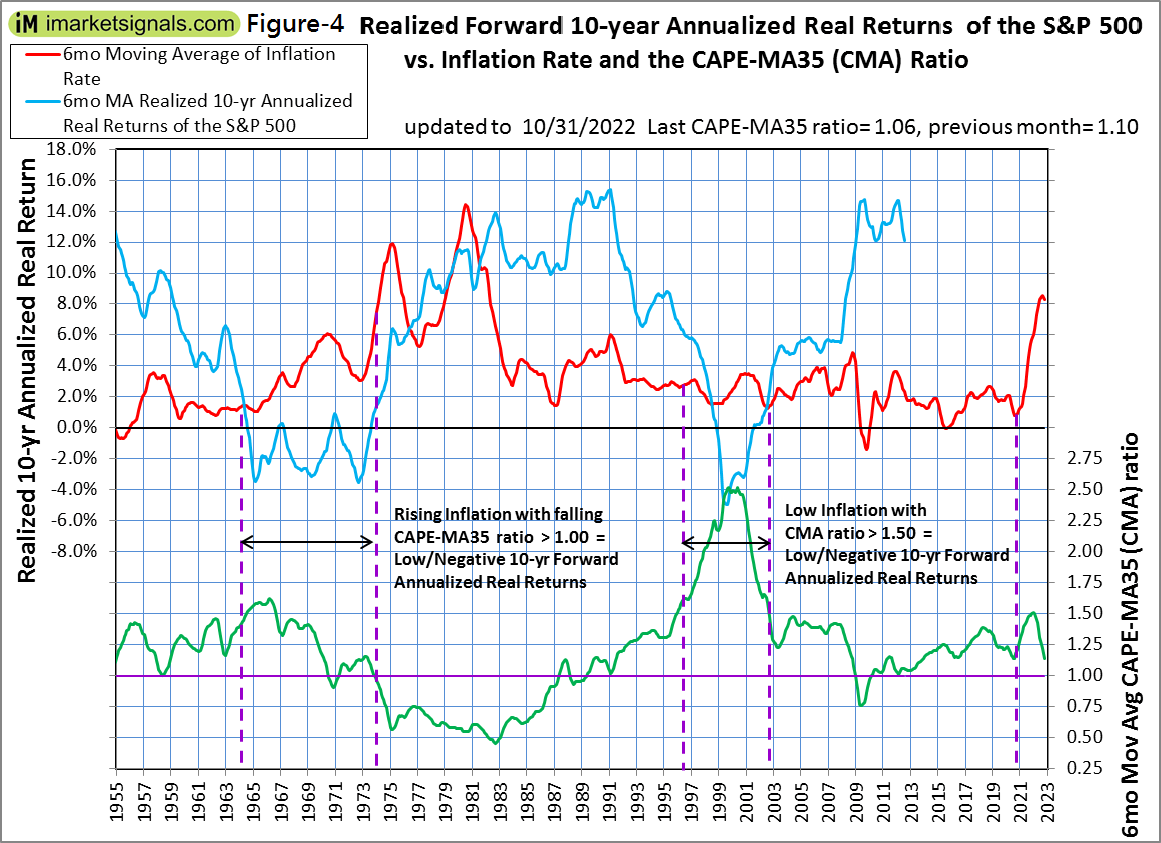 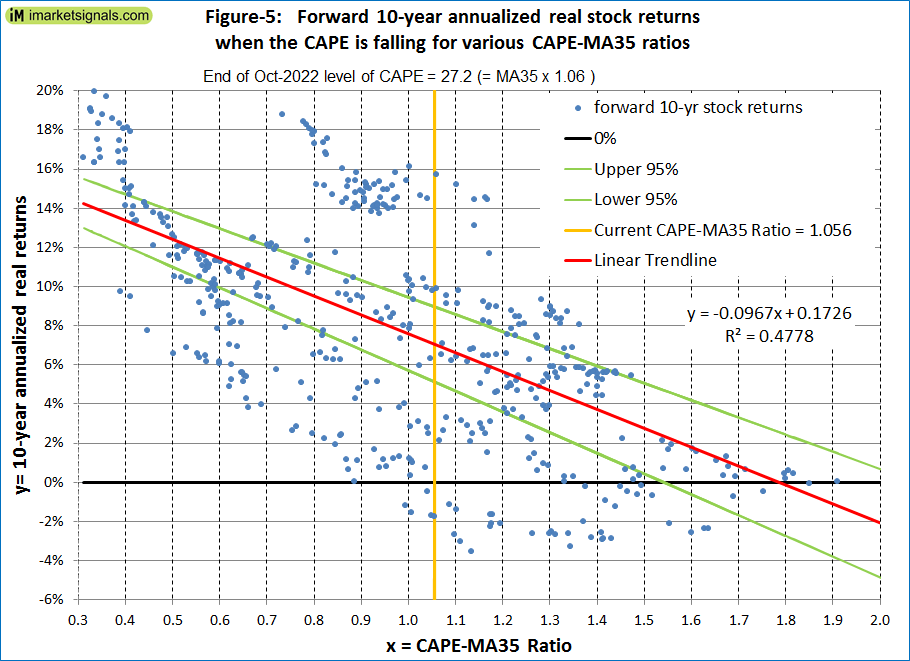 When extending the best fit line and the prediction bands (Figure-2), then the S&P-real end of October 2032 value would be 6,684.

Updates of the estimated 10-year forward returns of the S&P 500 (Figure-3) are posted monthly at imarketsignals.com.

The best fit line and prediction band were calculated from monthly data from Jan-1871 to Sep-2022.  This includes now an additional 10 years of data of the SP-real values for the period after July-2012, previously not included in the regression analysis.

Posted on Nov 4, 2022 by Anton Vrba
No Comments
With reference to Section 202(a)(11)(D) of the Investment Advisers Act: We are Engineers and not Investment Advisers, read more ... By the mere act of reading this page and navigating this site you acknowledge, agree to, and abide by the Terms of Use / Disclaimer