Improve on Vanguard LifeStrategy Growth Funds with a Dynamic Strategy

For a $1 million initial VSMGX investment in January 1999, one could have withdrawn on average a real (inflation-adjusted) $2,420 per month and still keep the original investment intact to November 2017. The monthly withdrawal amount can be more than doubled by adjusting the investment according to market climate, as indicated by a 50-200 day moving-average-crossover system of the S&P 500. This would have allowed an average withdrawal of a real $5,480 per month for almost 19 years, while still retaining a real $1,000,000 in the retirement account at the end.

We backtested  the model on the on-line simulation platform Portfolio123, which provides historical economic and financial data as well as extended price data for ETFs before their start dates. The model assumptions are:

The start date of the backtest was 1/2/1999, because this is the earliest start date for a simulation on Portfolio123.

The model holds ETFs  matching the underlying mutual funds of the Vanguard LifeStrategy Moderate Growth Fund (VSMGX), and in the same allocation of 60% stocks and 40% bonds during equity up-markets. During equity down-markets the model switches to 100% bonds, unlike Vanguard’s VSMGX which remains in 60% stocks in these down-periods.

Figure-1 below, compares the performance of the iM-DMAC(60:40) strategy (red graph) with that of Vanguard’s VSMGX (black graph). 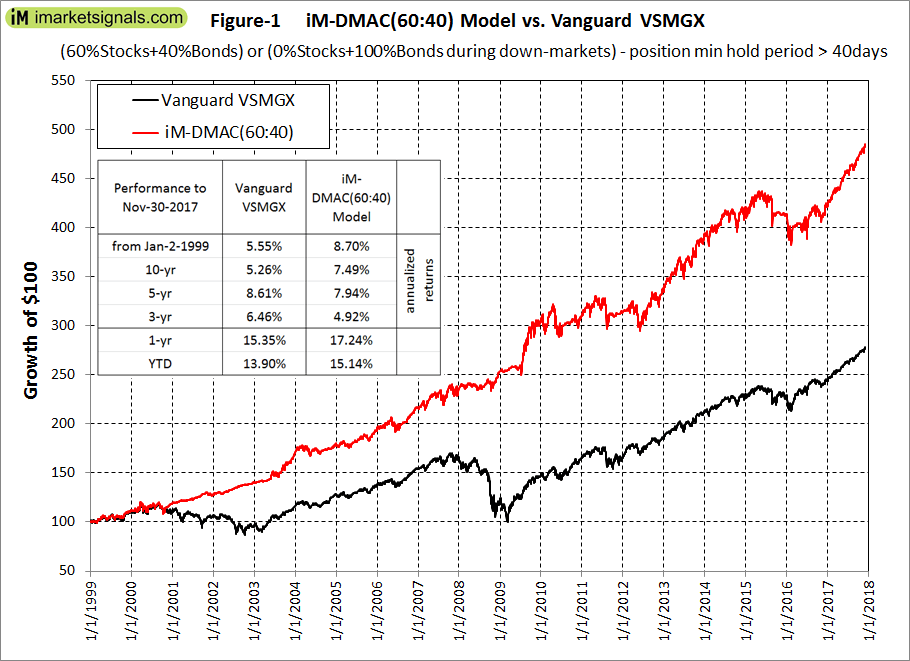 Obviously, a dynamic asset strategy is preferable to the buy-and-hold investment of VSMGX.

A simulation of VSMGX (shown as VSMGX*) using current asset allocation of the Vanguard LifeStrategy Moderate Growth Fund unchanged since January 2, 1999. The results of this simulated closely matches that of Vanguard’s VSMGX. (see table below) 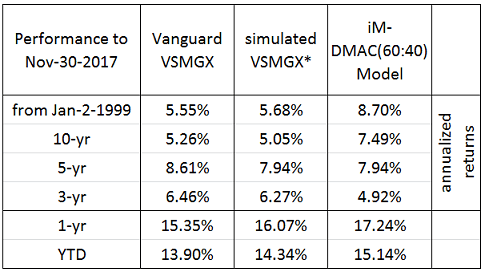 Table-1 below compares the risk measurements for iM-DMAC(60:40), VSGMX* and Portfolio123’s 60:40 benchmark. For most cases VSMGX* underperforms the benchmark, whereas iM-DMAC(60:40) outperforms both. To buy-and-hold a static 60:40 stock-bond investment is a risky strategy, evidenced by high maximum drawdowns, high standard deviations and the low Sharpe and Sortino ratios. In contrast, the iM-DMAC(60:40) provides higher returns at lower risks. 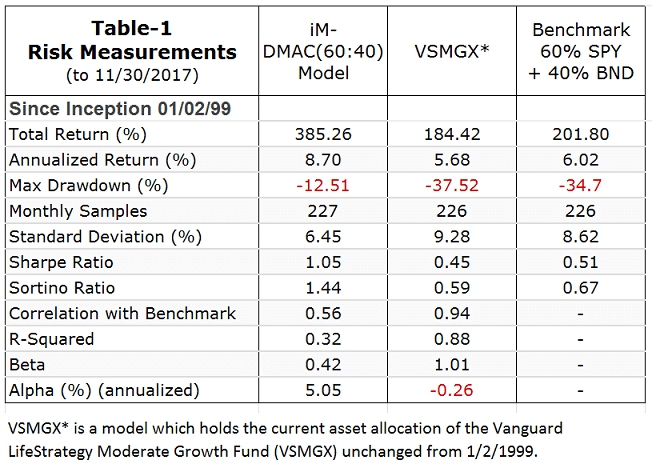 An additional risk consideration is that portfolios holding stock- and bond-funds should lose less during black swan events. An example is the October-November 1987 stock-market crash when the S&P 500 lost approximately 27% in a few days. Over the same period the Vanguard GNMA Fund (VFIIX) gained about 5%. A 60:40 stock-bond fund with VFIIX would have had a more tolerable loss of about 14%. Thus, it is prudent to invest in blended funds of stocks and bonds, provided one changes the investment to 100% bonds during equity down-markets.

Very little effort is required to adjust and rebalance the stock-bond allocation of the model over time. Table 2 below shows the trading statistics for the Dynamic 60:40 MAC Model. Over a period of almost 19 years, from January 1999 to November 2017, there were only 37 realized trades, including annual rebalancing transactions. A listing of realized transactions (not reproduced here) shows that trading occurred only on 34 days over this 19-year period. 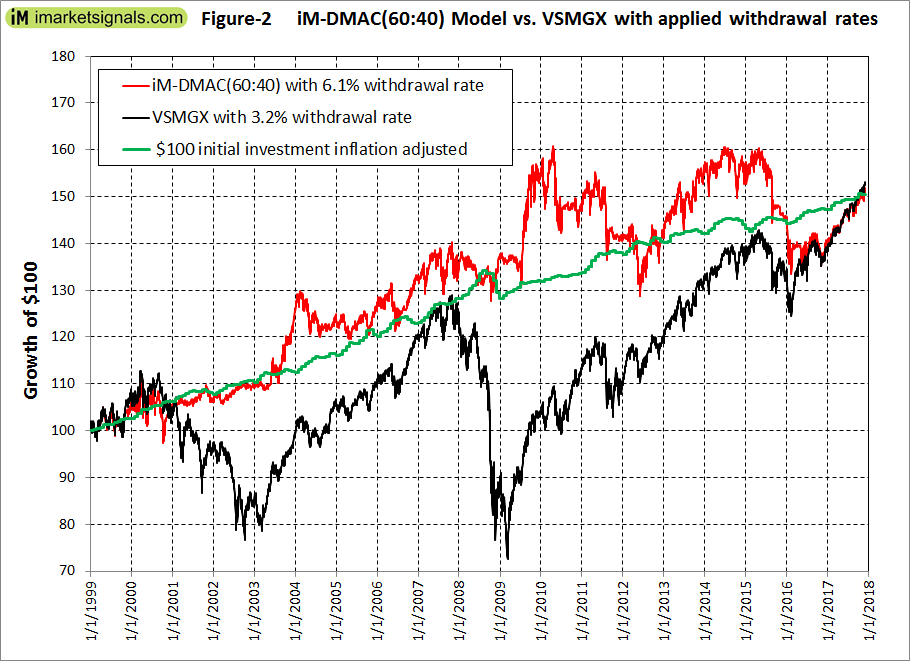 All three graphs have the same values at the start and at the end dates. However, the VSMGX’s investment value, with monthly withdrawals, suffered drawdowns of 32% and 42% in 2002 and 2009, respectively. For most of the time the value was well below the inflation adjusted initial investment, and the possibility of running out of money was a real threat.

In contrast, the value of the iM-DMAC(60:40) portfolio with monthly withdrawals tracked the real value of the initial investment most of the time and suffered only a 23% maximum drawdown in 2012.

To retain an inflation adjusted $1 million initial investment in VSMGX made in January 1999 the maximum allowable annual withdrawal was 3.2% of the portfolio value.  This translates to an average of a real $2420 per month for almost 19 years. The simulated actual monthly withdrawal amounts for 2017 are about $4000, and for 2009 about $2400, and over the period 1999 to 2017 the total of all actual withdrawal would have been $672,000.

Thus a dynamic bond-stock allocation strategy based on market climate provides a lower risk, much higher and more stable income for retirees than what a static bond-stock investment can produce.

Investors should heed the warning of Vanguard’s founder, Jack Bogle, who says that over the next decade a conservative portfolio of bonds will only return about 3% a year and stocks about 4% a year. Passively holding funds like the Vanguard LifeStrategy Funds or Target-Date Retirement Funds would, according to Bogle, then only return about 3.5%.

Over the last 19 years blended 60% stock and 40% bond portfolios provided a return of about 5.5%. This would have increased to about 8.7% with the dynamic asset allocation strategy described here. If over the next decade returns from blended portfolios are as low as 3.5%, then the iM-DMAC(60:40) strategy probably could increase the return to 5.5%.

We have shown that with little effort one can improve returns significantly over the longer-term by switching to 100% bonds during down-market periods, which is easily identified by a simple 50-200 day moving-average-crossover system of the S&P 500, a dataset available to all.

Posted on Dec 20, 2017 by Georg Vrba
← 12 Comments
With reference to Section 202(a)(11)(D) of the Investment Advisers Act: We are Engineers and not Investment Advisers, read more ... By the mere act of reading this page and navigating this site you acknowledge, agree to, and abide by the Terms of Use / Disclaimer