Home › blogs › A 0.3% Rise in the Unemployment Rate Will Signal an Oncoming Recession.

A 0.3% Rise in the Unemployment Rate Will Signal an Oncoming Recession.

The following indicators are used to signal recession starts:

The criteria for the model to signal the start of recessions are given in the original article (Apr-2012 article link) and repeated in the Appendix.

We have made a hypothetical forecast for the UER to increase to 5.3% by the end of 2016 (Apr 4.9%, May-Jun 5.0%, Jul-Aug 5.1%, Sep-Nov 5.2%, Dec 5.3%), and updated our model accordingly. For a recession signal, the short EMA of the UER would have to form a trough and then cross its long EMA to the upside. Alternatively, the UERg graph would have to turn upwards and rise above zero, or the 19-week rate of change of the UER would have to be above 8%.

Referring to Figure-1 (with hypothetical UER data from April to December 2016), and looking at the end portion of it, one can see that two of the conditions for a recession signal would then be met. 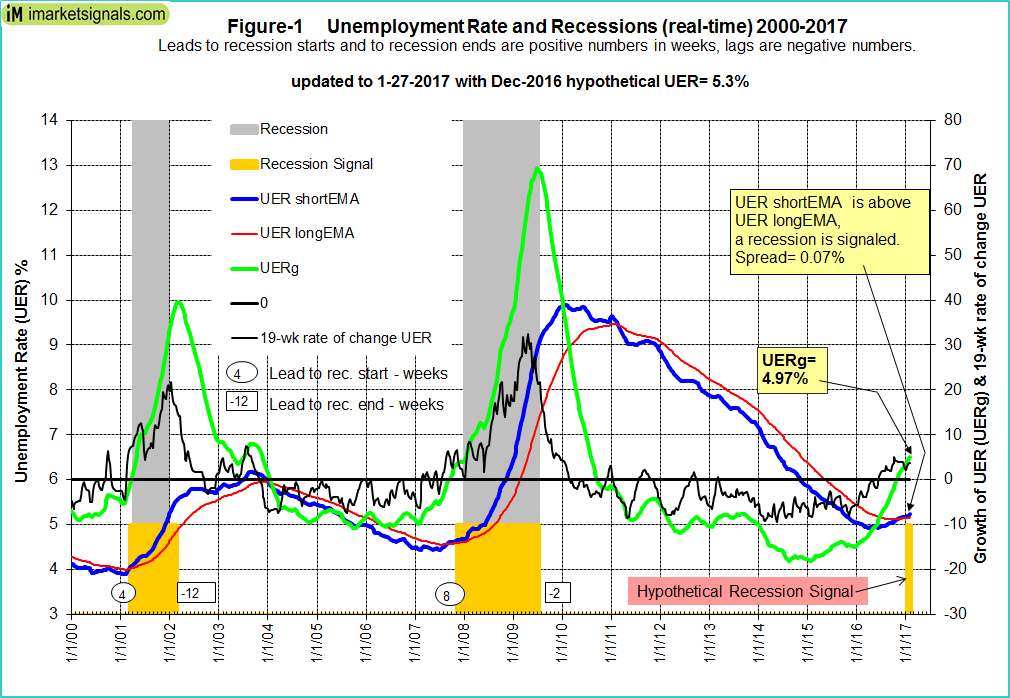 Historic patterns of the unemployment rate indicators prior to recessions

Monthly unemployment data is listed at FRED from 1948 onward, a data set that spans 11 recessions and covers a much longer period than the historical data for most other indicators. Figure-2 shows the period 1973 to 2017, with hypothetical UER data from April to December 2016. One can see that the patterns of the indicators are always similar before and after recessions.

Others have also observed this. For example, Gundlach in recent webcasts has been following a new metric – the U.S. unemployment versus its 12-month moving average; when the former drops below the latter, it is indicative of an oncoming recession. For the past eight months, unemployment has been between 4.9% and 5.1%, and Gundlach said if it moves up a couple of tenths in the next couple of months, “we will be on recession watch.”

Gundlach’s “new metric” is similar to our model’s “old metric”, namely the short 12-period and long 60-period exponential moving average cross-over condition (the blue and red graphs in Figure-2) which was published four years ago, with monthly updates since then. 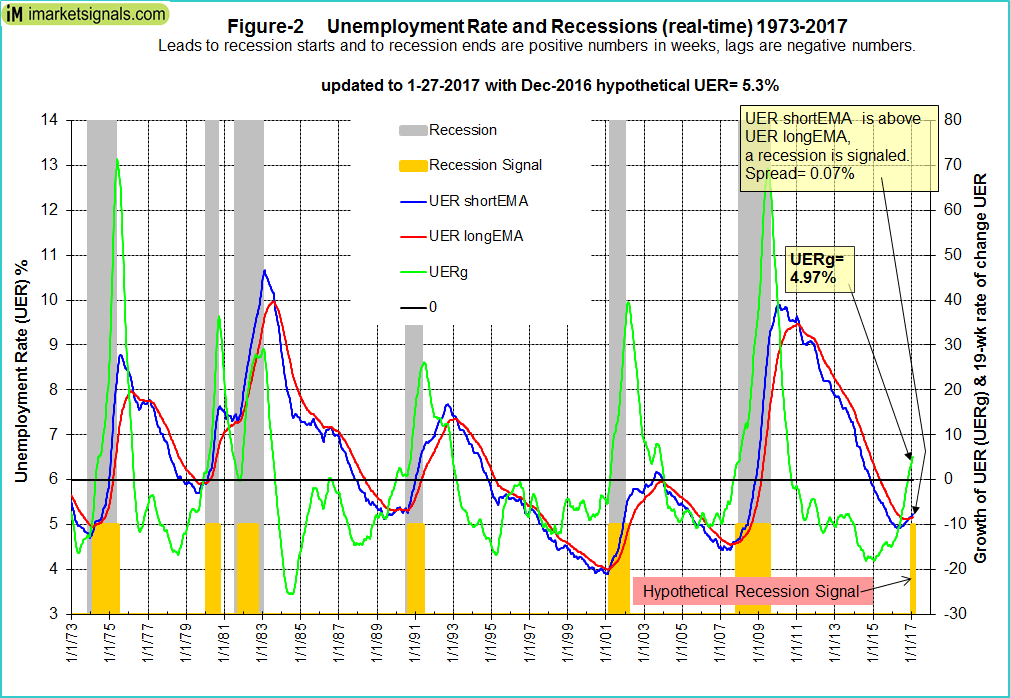 Why investors should monitor the UER model

From the table it is apparent that the Unemployment Rate can be used as coincident recession indicator. The model signaled the start of recessions on average one week late. Investors in an S&P500 index fund would on average have avoided drawdowns of about 26%, and 54% during the last recession.

Currently the UER (March 2016) is at 5.0%, signifying that no recession is imminent. However, according to the model, should the UER increase to 5.3% in the future, then the probability for the beginning of a new recession becomes extremely high.

Investors can follow the UER model on our website iMarketSignals.com where it is updated monthly after the latest UER figure becomes available.

Posted on Apr 22, 2016 by Georg Vrba
No Comments
With reference to Section 202(a)(11)(D) of the Investment Advisers Act: We are Engineers and not Investment Advisers, read more ... By the mere act of reading this page and navigating this site you acknowledge, agree to, and abide by the Terms of Use / Disclaimer