Using 3 large-cap models from the web-based trading simulation platform in combination with Best(SPY-SH) and Best1(Sector SPDR), we demonstrate that the combination would have produced very high positive rolling returns and also high annualized returns with low drawdowns and low volatility.  Additionally this combination model, due to the very high liquidity of its large-cap stocks, could easily support a total portfolio size of about $100-million.

The component models and their percentage weights in the combination are listed below:

The current holdings for a portfolio value of $100,000 are listed in the Appendix.

None of the above models sell short or use margin. This combination model is therefore always trading long, and has an average annual turnover of about 500%.

The combination, Combo5, would have produced, an annualized return of 33% with a  maximum drawdown of only -12% as shown in Figure 1.  The in-between-recession segments of the ratio graph Combo5 to SPY are almost straight lines with a constant upward slope, indicating that Combo5 consistently out-performed SPY.

Had one left out the ETF models Best(SPY-SH) and Best1(Sector SPDR), then the annualized return for the resulting 3 model combination, Combo3, would have been 32.5% with a  maximum drawdown of -14.8%, as shown in Figure 1a.  This is almost the same as Combo5’s return, but with a somewhat worse drawdown.  However, the ratio graph Combo3 to SPY shows the undesirable erratic performance of Combo3 without the stabilizing effect of the ETF models. 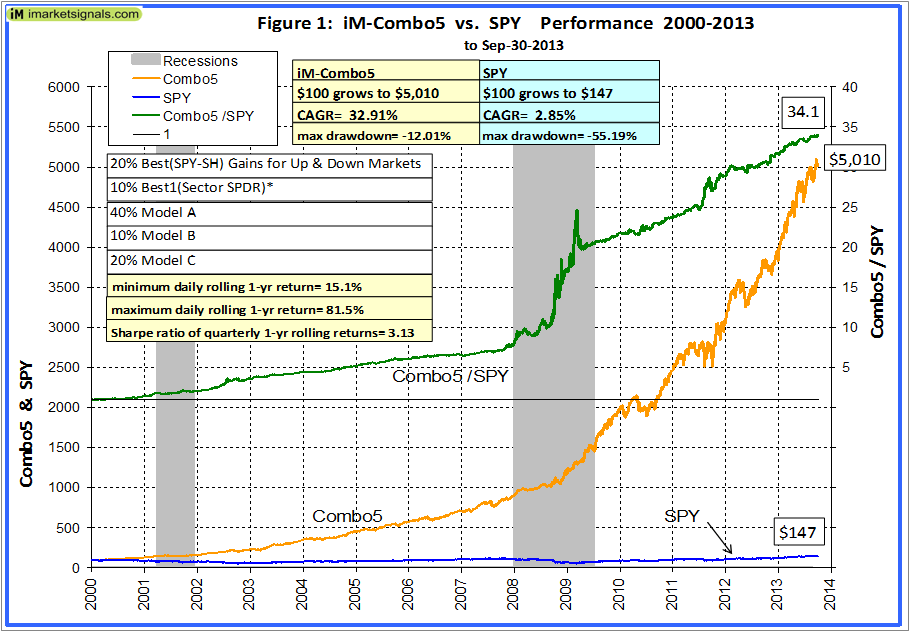 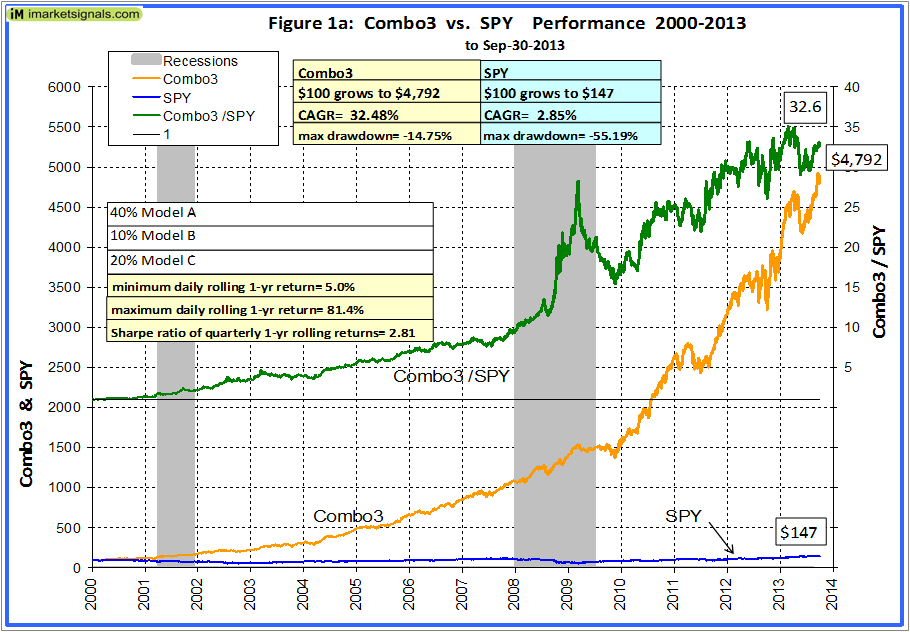 Figure 2 shows the annual returns for Combo5.  Note that the variation between returns is relatively low.  The average annual return was 32.1%, the lowest was 23.5% and the highest 58.1%, resulting in a high Sharpe ratio of 3.0. 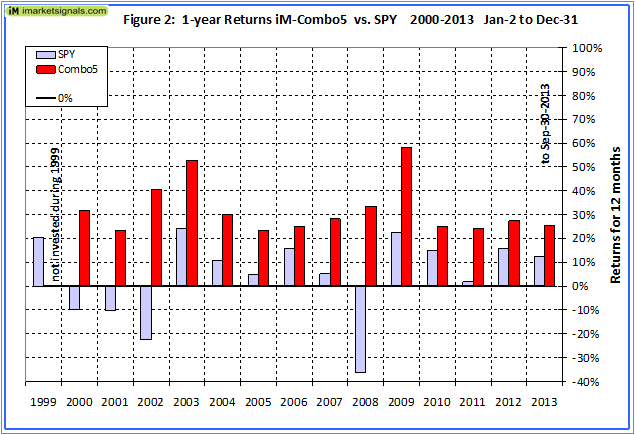 Figure 3 shows the rolling 1-year returns starting each trading day from 2000 to 2012. For Combo5 the lowest return was +15.1%.  The rolling returns were always greater than for SPY, except for 2 weeks in March 2010.  For rolling 1-year returns starting every 3 months the Sharpe ratio was a high 3.13, indicating that the returns were consistently of similar magnitude.

Without Best(SPY-SH) and Best1(Sector SPDR) in the combination, then as shown in Figure 3a, the lowest rolling return for the resulting Combo3 would have still been a positive 5.0%, but the rolling returns in 2004 and 2009-10 would have been considerably lower than the ones for SPY. 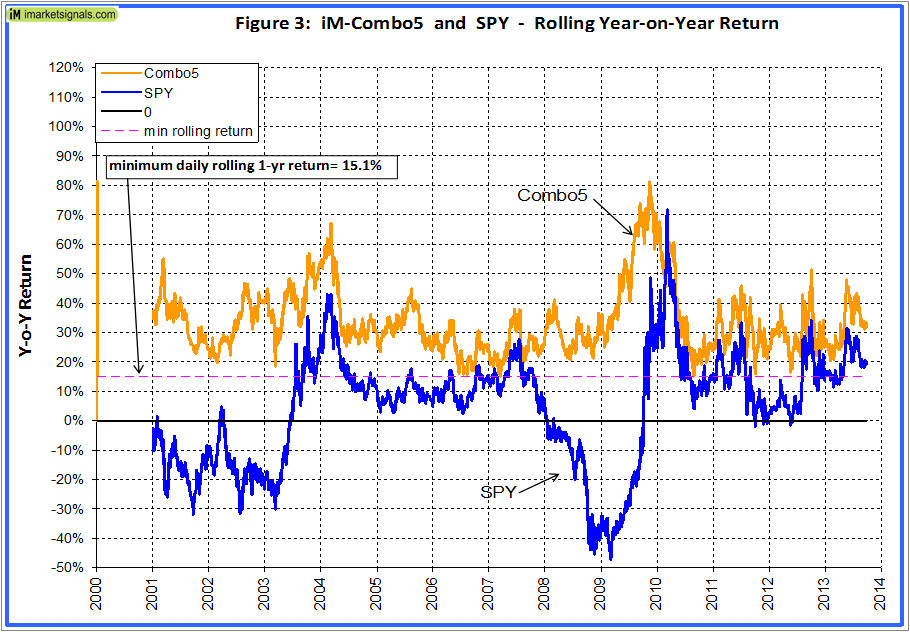 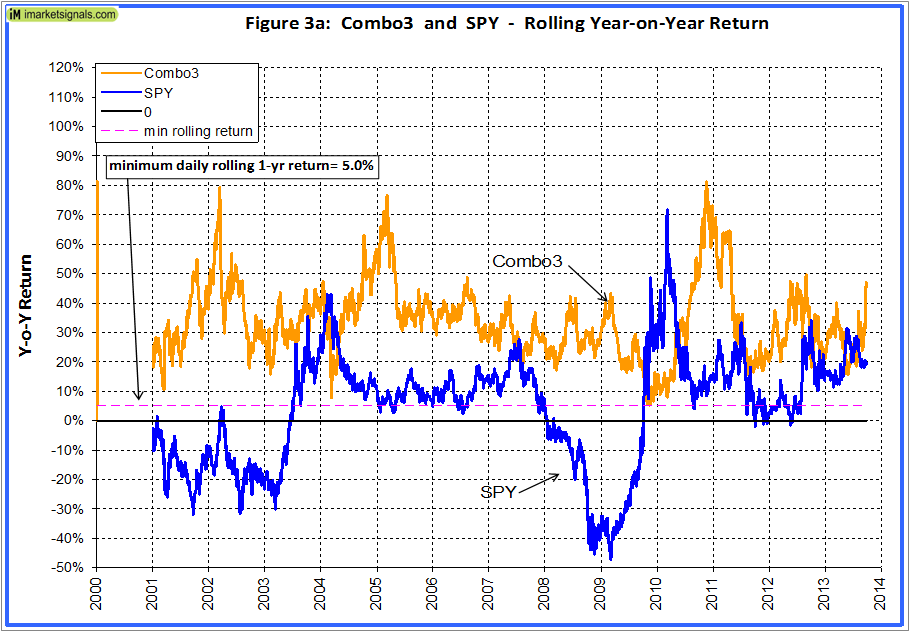 From the table below it is evident that the 5 assets in the combination have a low correlation to each other.  From a portfolio construction standpoint, the combination should be more robust than any single system on its own. 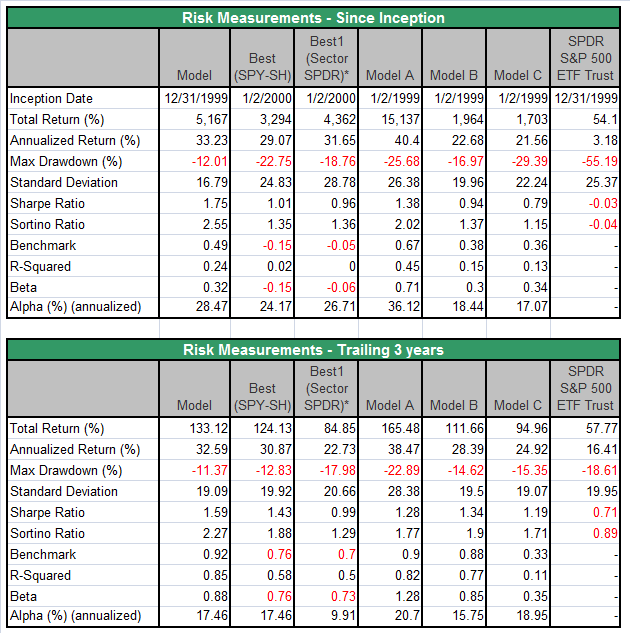 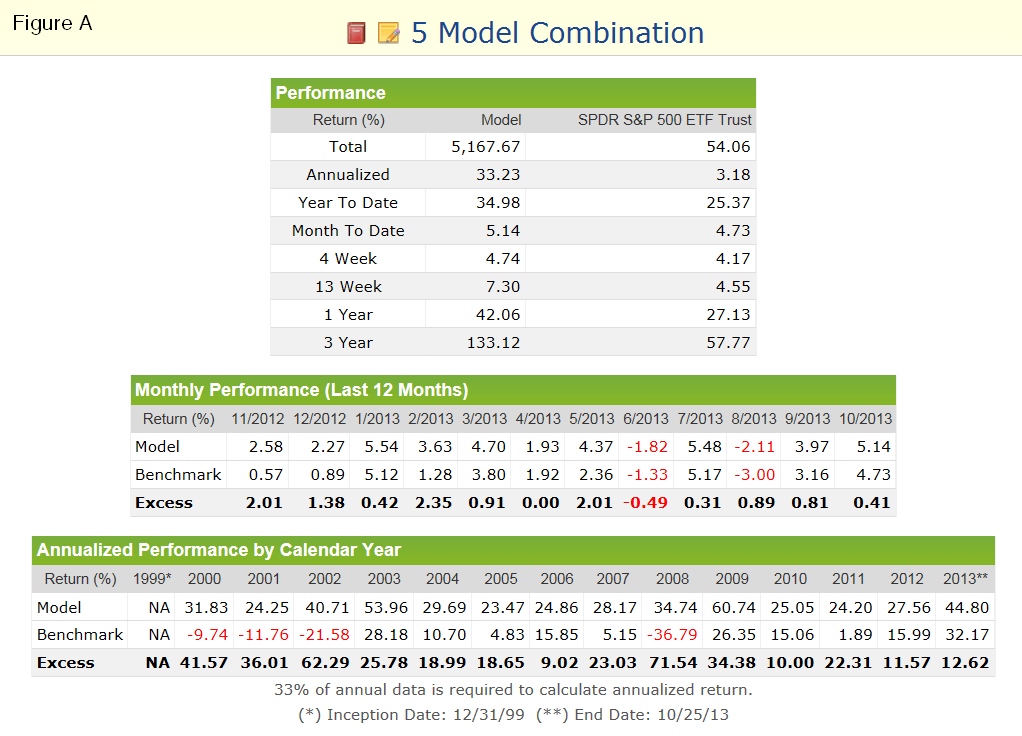 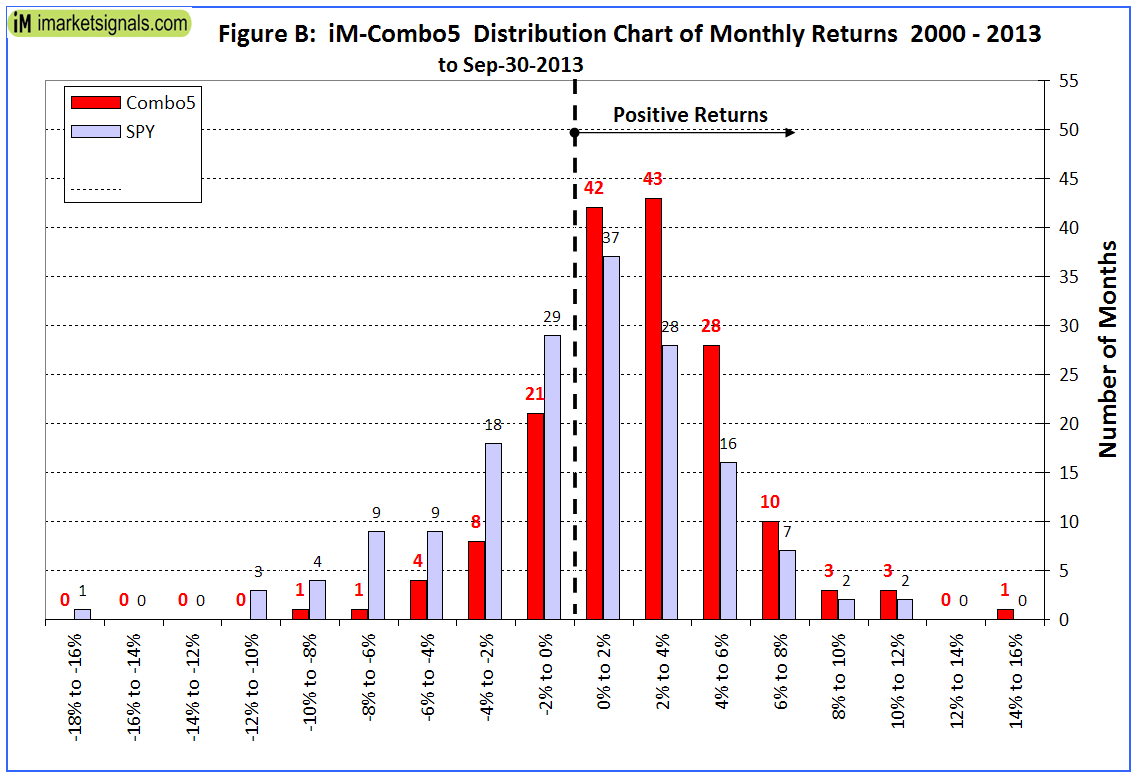 There were a total of 165 months in the period under consideration. Combo 5 produced positive returns during approximately 130 months with only about 35 months of negative returns, as is evident from the chart above.

The maximum portfolio size is dependent on the liquidity of the stocks and ETFs in the model.  The ETFs have huge liquidity and will not place a constraint on portfolio size. To calculate the maximum size a portfolio can handle without incurring too much slippage the following formula is recommended:

Model A has the lowest liquidity of the bottom 20 Pct, and is thus the critical model in the combination. Model A represents 40% of the total portfolio. 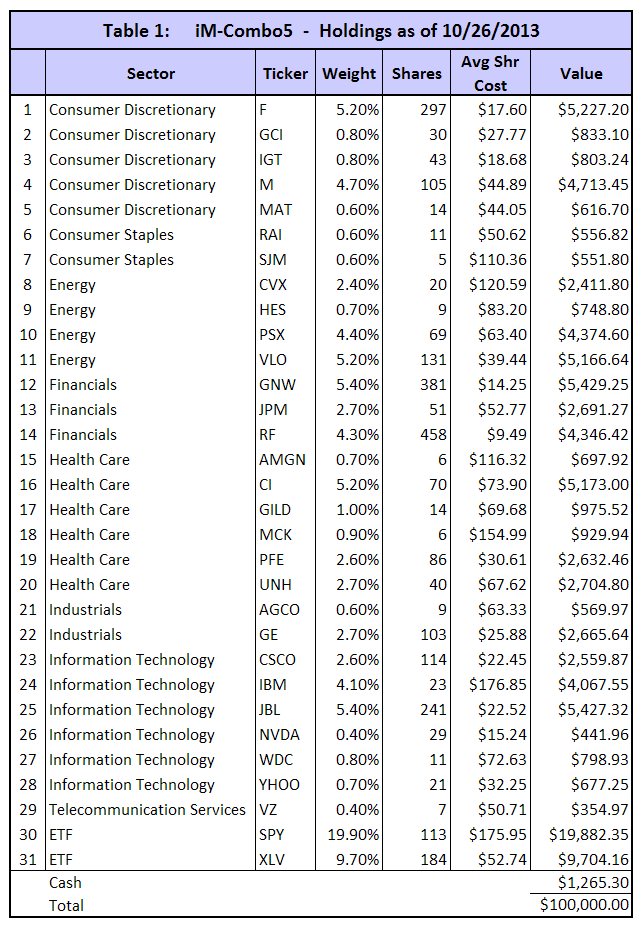 Posted on Oct 30, 2013 by Georg Vrba
← 7 Comments
With reference to Section 202(a)(11)(D) of the Investment Advisers Act: We are Engineers and not Investment Advisers, read more ... By the mere act of reading this page and navigating this site you acknowledge, agree to, and abide by the Terms of Use / Disclaimer