In this previous article: Outperforming The S&P 500 With 50 Consensus Stock Holdings Of 40 Large Hedge Funds it was shown that following the 50 consensus holdings would have been a profitable strategy over time. Since for most investors holding 50 stocks may be impractical a 10-stock strategy is proposed here. This strategy uses a ranking system based on a combination of the standard Portfolio 123 Greenblatt- and Sentiment ranking systems to periodically select the 10 highest ranked stocks from the universe of 50 stocks.

The universe comes from the quarterly 13F filings of the 40 large hedge funds, point in time, approximately 45 days after the end of month filing date of each quarter, as described in the above referenced article. The most current universe listing can be found here.

The backtest was performed online at Portfolio 123 (P123). Since the model holds 10 stocks from the 50-stock universe the historical performance is shown for five “buckets”, i.e. 10 stocks per bucket. All five quintile bars depicted in the chart show higher returns than S&P 500 ETF (SPY), the red bar.  The top quintile holds the highest 10 ranked stocks and also produced the highest annualized return of 22.6%, excluding trading costs, similar to the historic simulated performance shown in Figure-1 below. 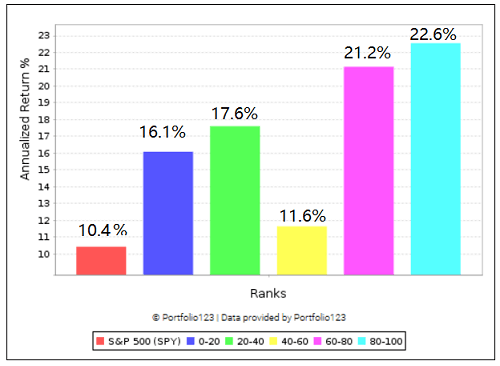 Stocks are held for at least 4 weeks and sold if:

The simulation start date was February 2008 and used the initial 2007-Q4 data available mid-February 2008 with data updates every 3 months, as discussed in the referenced article.

Figure-1 shows the performance of this strategy with positions having equal weight of +/- 10%. This strategy would have produced an annualized return of 22.3% with an average annual turnover of 550%. Trading costs of 0.1% of the transaction amounts were taken into account. The total return would have been about 5-times that of SPY and the average holding period for a position would have been 65 days. 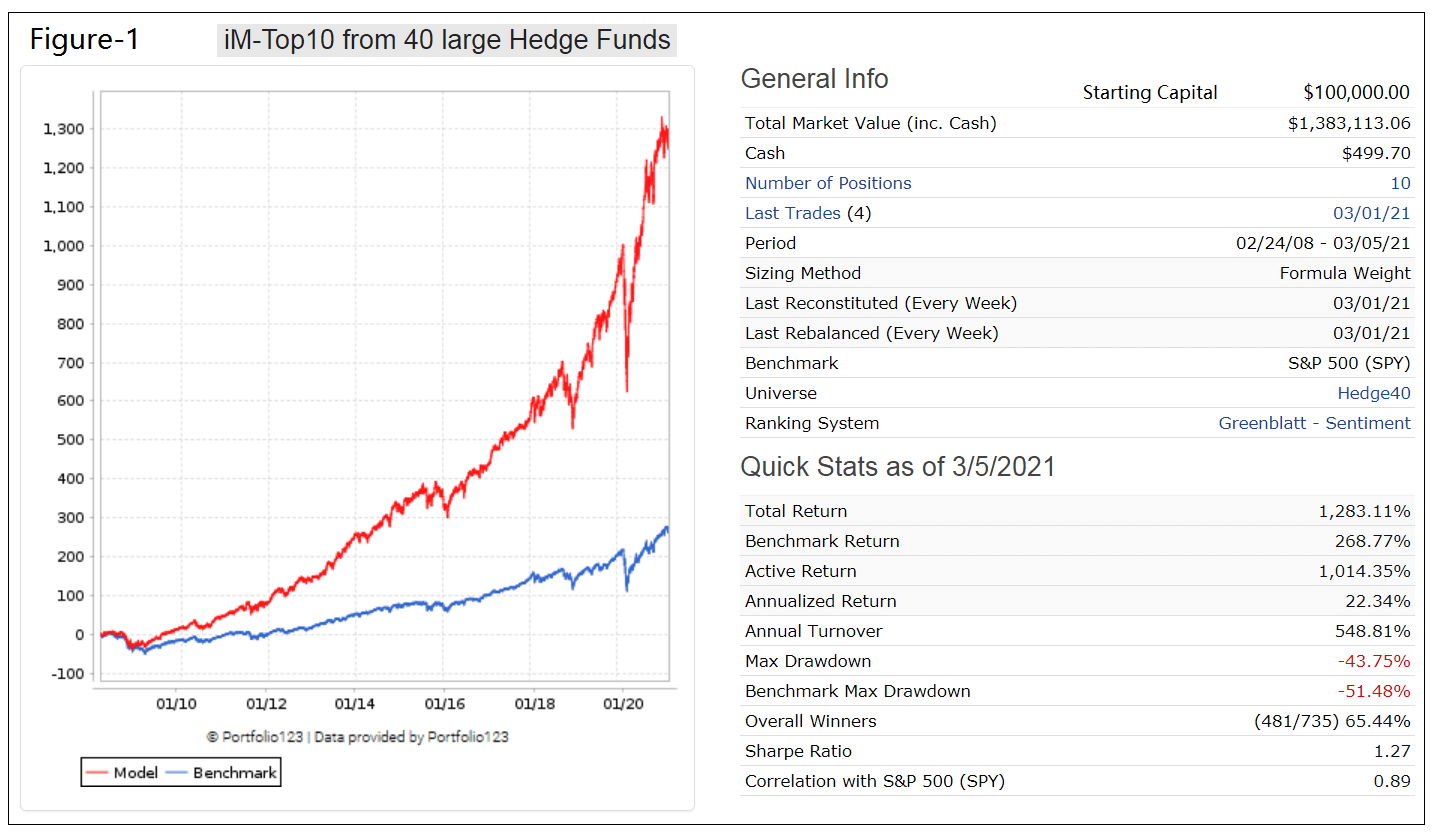 The model outperformed the benchmark SPY for every full calendar year, as can be seen from the table below.

In the table below are the risk statistics from 2008 to 2021 for the model relative to the benchmark S&P 500 (SPY). It is evident from the risk measures that the trading strategy carries less risk than investing in SPY over the longer term. The positive alpha indicates that this strategy would have outperformed its risk-adjusted benchmark return on average by 11.5% per year.

In the table below are the trading statistics for this model. Over the 13-year backtest period there were 725 realized trades, i.e. 725 buy- and 725 sell trades, resulting on average in 111 trades per year. The model is also occasionally rebalanced to equal weight which required about 16 additional rebalancing transactions per year. Rebalancing transactions are limited to 1% of portfolio value. 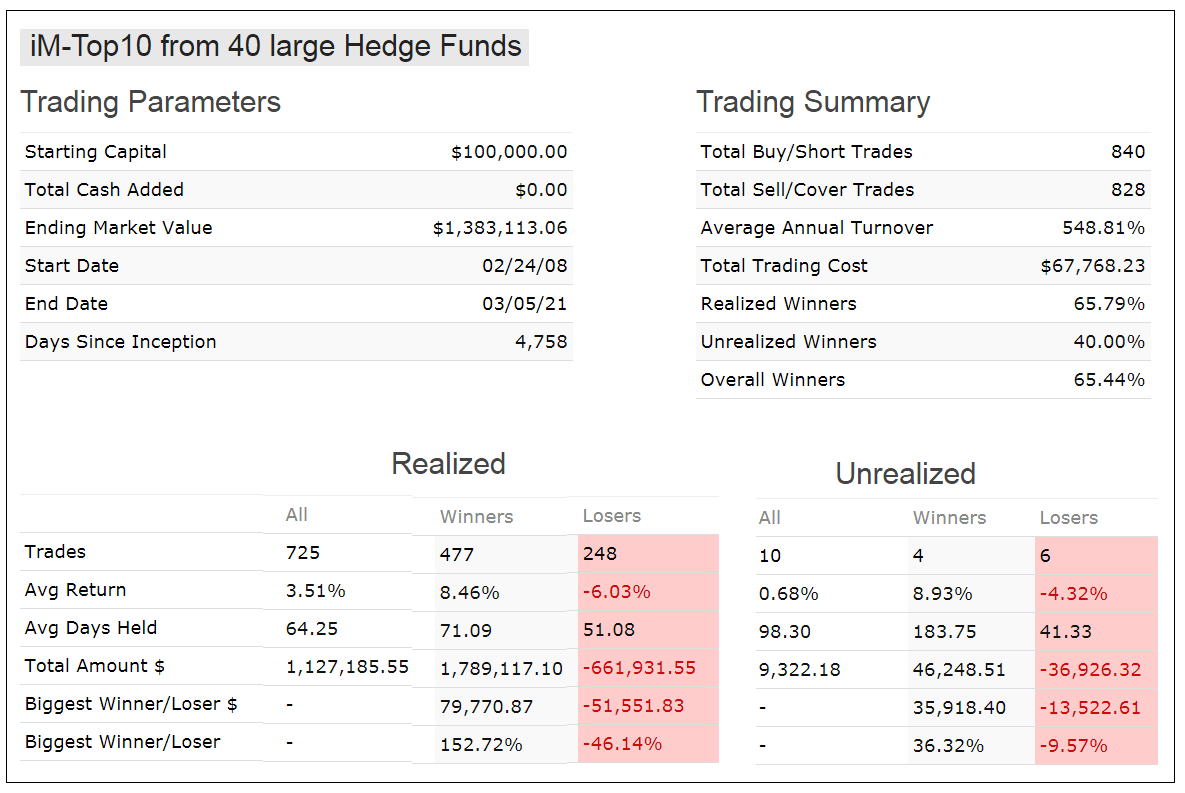 The current holdings and most recent trades are listed in the appendix. Note that holdings are all large-cap stocks held equal weight.

The analysis shows that a trading strategy which typically holds 10 out of 50 positions from a hedge fund copycat system would have produced good returns, preferable to a buy-and-hold investment strategy of an index fund tracking the S&P 500. However, since this model is reconstituted weekly trading may be required every week.

We will endeavor to provide the periodic trading signals, as well as performance updates, here on SeekingAlpha. Alternatively,  on  iMarketSignals one can also follow this strategy for free.

All results shown are hypothetical and the result of backtesting over the period 2008 to 2021.  No claim is made about future performance.

Posted on Mar 26, 2021 by geovrba
← 2 Comments
With reference to Section 202(a)(11)(D) of the Investment Advisers Act: We are Engineers and not Investment Advisers, read more ... By the mere act of reading this page and navigating this site you acknowledge, agree to, and abide by the Terms of Use / Disclaimer