The analysis was performed on the on-line portfolio simulation platform Portfolio 123.

According to the Technology Select Sector SPDR Fund’s fact sheet the fund is composed of S&P 500 companies primarily involved in such industries as software and services, IT consulting services, semiconductor equipment, computer and peripherals. As of Sep-10-2020 total assets under management were $34,430 M. Holdings of XLK are cap-weighted, which is reflected in two of its 71 holdings, Apple and Microsoft, having a weight of 45%, meaning that XLK has $15,335 M in those two stocks alone.

Since historic holdings of XLK are not published, a custom universe was constructed from the technology stocks of FactSet’s Revere Business Industry Classifications System, together with some electronic payments industry stocks. All stocks must also be included in the S&P 500 index.

The simple rules to set up the custom universe “S&P 500 (TECH)” in Portfolio 123 are shown below. Note that the high-growth stocks – Facebook (FB), Netflix (NFLX) and Google-owner Alphabet (GOOGL) are excluded. Also Amazon (AMZN) is not included because it is not classified as a tech stock.

A backtest of the custom universe from 1/2/2000 to 9/8/2020 shows a 99% correlation with the performance of benchmark XLK and identical total returns of 169% over this period. The current 10 largest holdings of the backtest also coincide with what is published for XLK, with small variations in weights.  A management fee of 1.0% was taken into account in the simulation, higher than the 0.13% fee that the managers of XLK currently apply.

The annualized return of XLK over the backtest period was only 4.9% and the maximum drawdown was over 80% as one can see from the statistics in the Figure-1 below, where the red graph depicts the performance of the custom universe and the blue graph (mostly hidden) the performance of XLK.

Thus, one can confidently conclude that the custom universe S&P 500 (TECH) reflects reasonably accurately the performance of the cap-weighted holdings of XLK over the backtest period, and stocks selected should not differ by much from what would have been selected from a universe of XLK’s actual historic holdings. 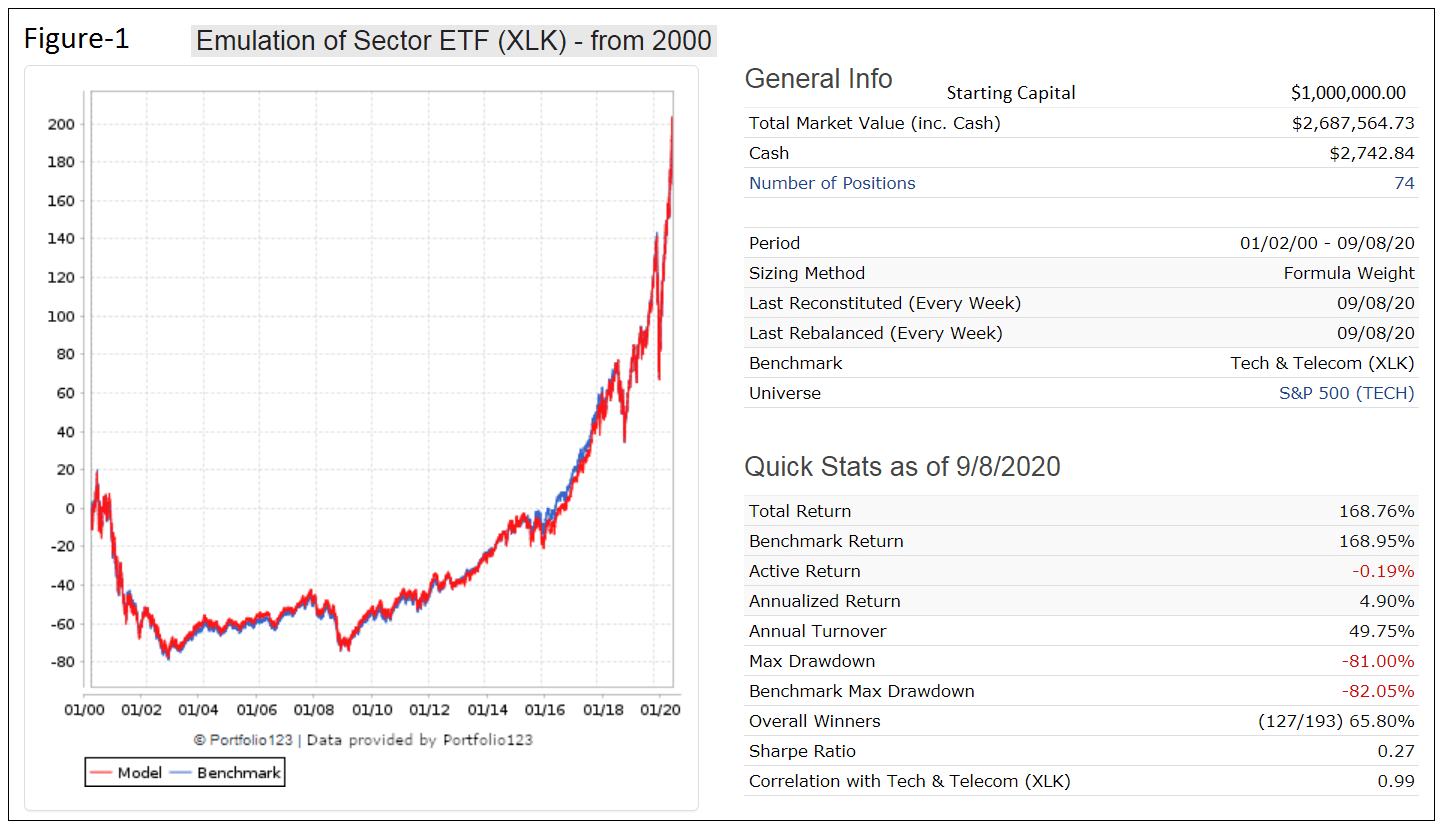 The only buy rule requires tech-stocks to have a dividend yield greater than that of the S&P 500 index. The financial stocks are not subject to this constraint. Also there is only one rank based sell rule and a specified minimum holding period of 6 weeks. 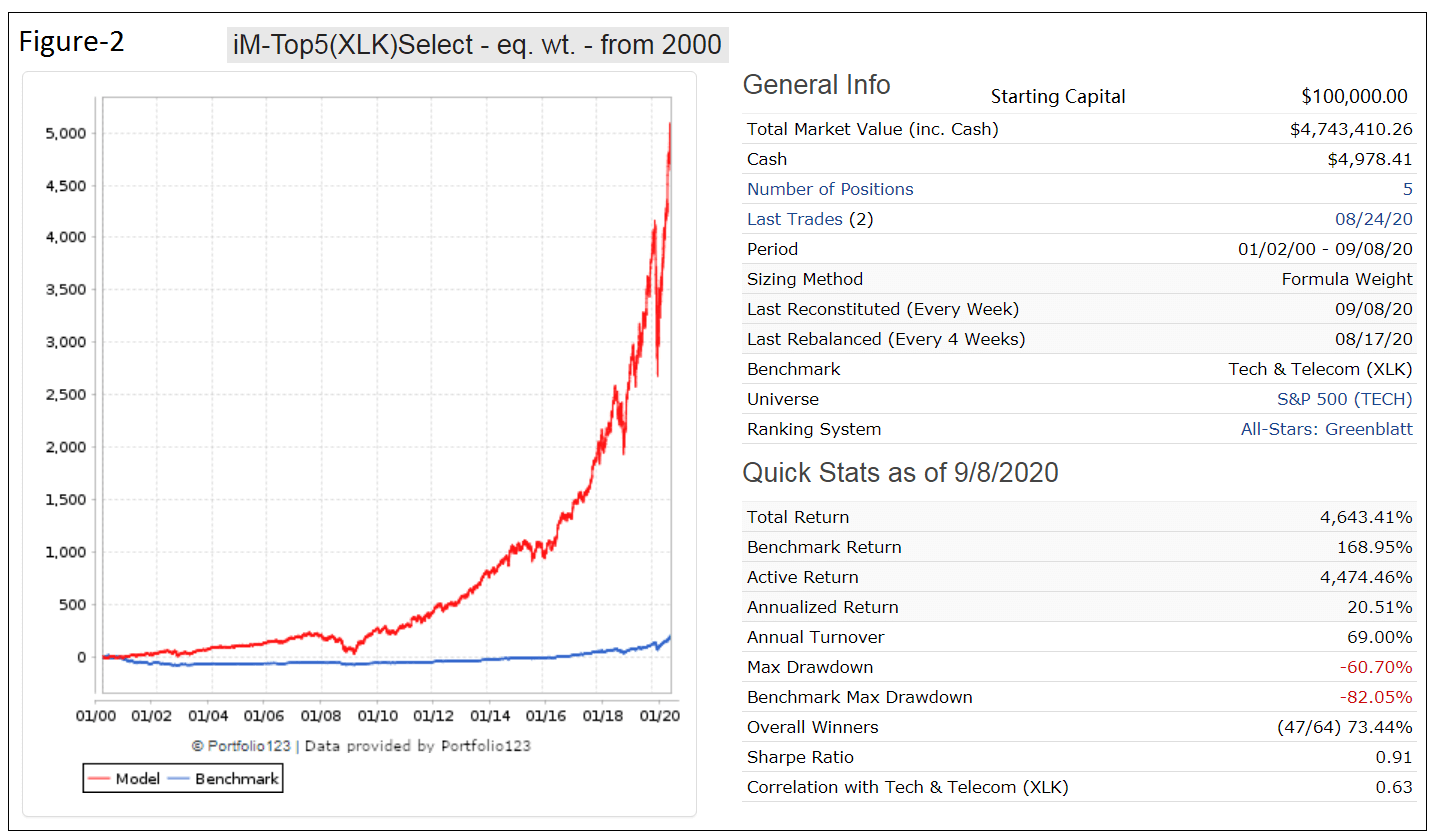 Tech-stocks have performed well since 2009, with XLK showing a 20.1% annualized return for the period 1/2/2009 to 9/8/2020 versus 13.8% for the S&P 500 ETF (SPY). The simulated performance of the trading strategy for the same period is shown in Figure-3. Again the model outperformed XLK; the backtest shows an annualized return of over 30% and a low annual turnover of about 50%. 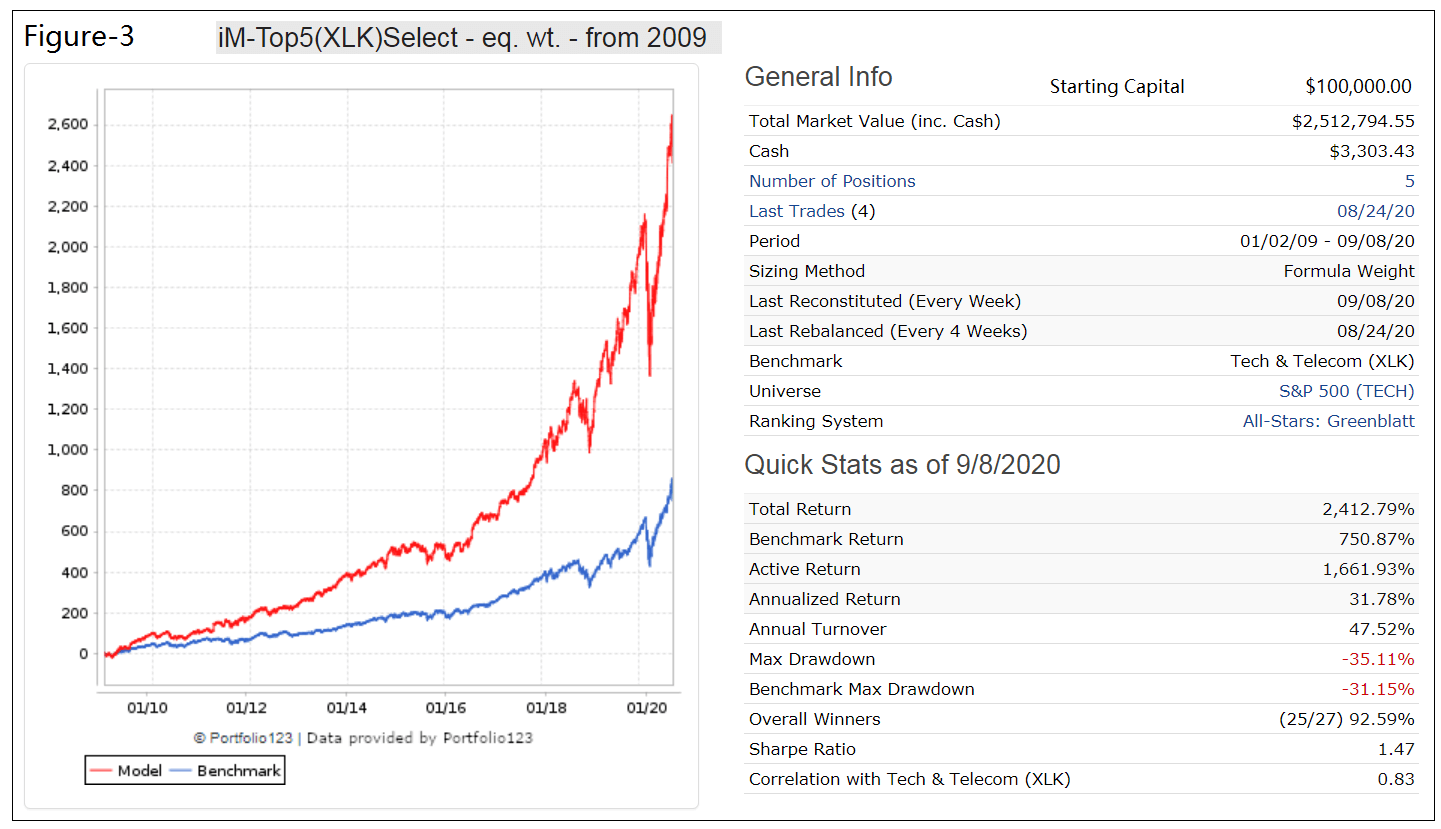 The investment risk of this 5-stock portfolio should be similar or less than holding XLK which currently has 45% of its assets in only two stocks. If Apple and Microsoft continue to increase their market capitalization relative to the remainder of the ETF’s holdings then this percentage will increase further. That is not a desirable risk situation.

In the table below are the risk statistics from 2000 to 2020 for the model and XLK relative to the benchmark S&P 500 (SPY). It is evident from the risk measures that the trading strategy carries less risk than investing in XLK over the longer term. 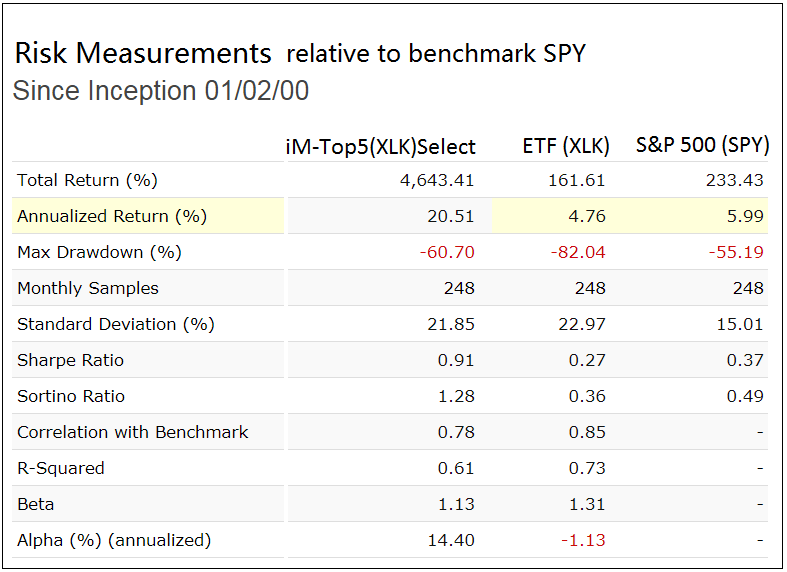 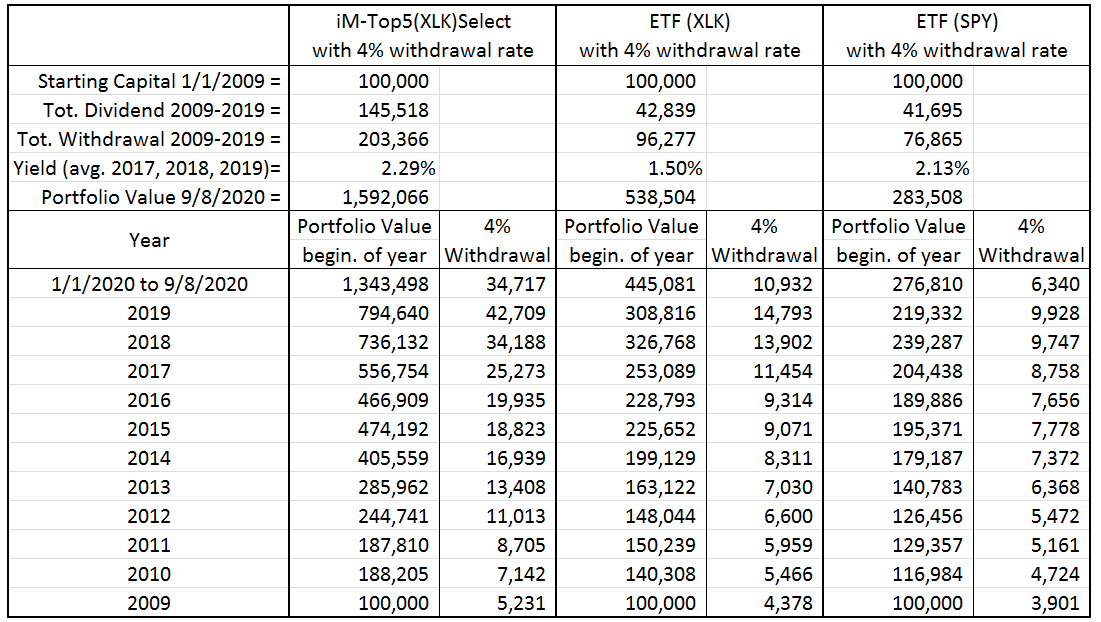 The analysis shows that the iM-Top5(XLK)Select investment strategy would have produced excellent returns, much preferable to a buy-and-hold investment strategy of stock index funds such as XLK or SPY. Reasonably high withdrawal rates should be possible without depleting the investment.

Minimum trading is required. The model shows a low average annual turnover of about 50% with a position held on average for 18 months and not shorter than 6 weeks. The current holdings are listed in the appendix.

This model can easily be reproduced on Portfolio 123 from the information provided here. Also at iMarketSignals one can follow this strategy where the performance will be updated weekly.

All results shown are hypothetical and the result of backtesting over the period 2000 to 2020. No claim is made about future performance.

Posted on Sep 17, 2020 by Georg Vrba
No Comments
With reference to Section 202(a)(11)(D) of the Investment Advisers Act: We are Engineers and not Investment Advisers, read more ... By the mere act of reading this page and navigating this site you acknowledge, agree to, and abide by the Terms of Use / Disclaimer