Home › blogs › Covid-19 Recession — No Sign of a Recovery: The iM-Weekly Unemployment Monitor

Covid-19 Recession — No Sign of a Recovery: The iM-Weekly Unemployment Monitor

The May 2020 U.S. Employment Situation report, published June 5, showed much uncertainty in the current employment situation, especially after the Bureau of Labor Statistics (BLS) explained that were it not for a misclassification error the unemployment rate would have topped 16%, much higher than the official published 13.3%.

Every Thursday the Department of Labor (DOL) publishes the Weekly Insured Unemployment Claims.  In the current Covid-19 situation we believe that the only meaningful figures from this weekly report are:

In the figure below we graph the following:: 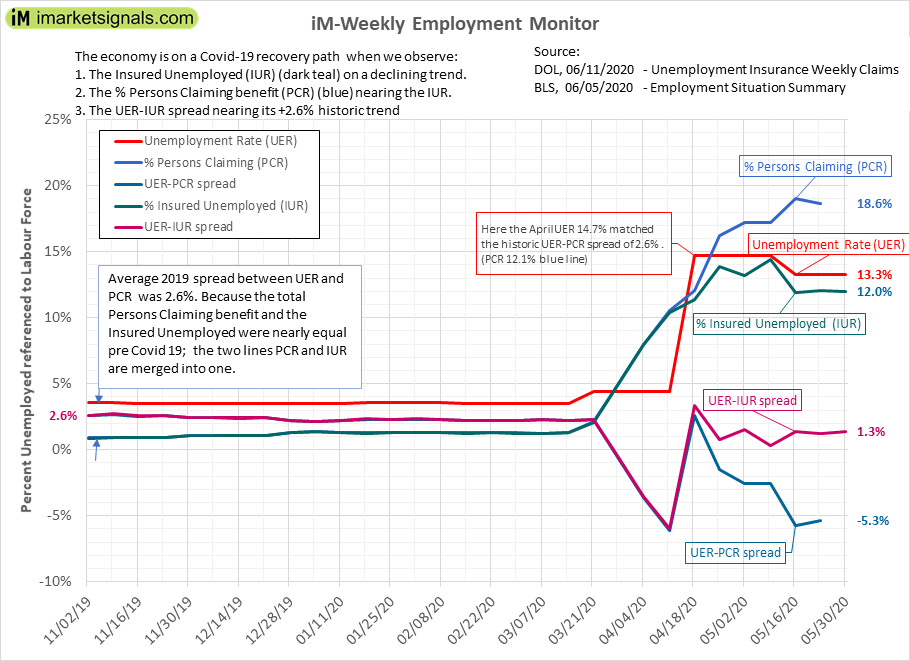 A recovery would be indicated by the following:

What is already encouraging from this graph is that the IUR has not increased over the last 6 weeks, despite over the same period nearly 17 million people having made initial claims.  This could be indicative of a return to work of the same proportion. However, discouraging is the huge uptick in persons outside the insured unemployed who receive Covid-19 assistance.

We will update this graph every Thursday.

2 comments on “Covid-19 Recession — No Sign of a Recovery: The iM-Weekly Unemployment Monitor”

Posted on Jun 12, 2020 by Anton Vrba
← 2 Comments
With reference to Section 202(a)(11)(D) of the Investment Advisers Act: We are Engineers and not Investment Advisers, read more ... By the mere act of reading this page and navigating this site you acknowledge, agree to, and abide by the Terms of Use / Disclaimer