Unlike investments that targets companies with consistent and perennial dividends, cash needs are provided by a strategy of trading large-cap stocks with good dividends and holding them on average for six months. The simulation shows that this would not only have generated a very high dividend yield of about 3.7% (average for last 10 years), but also would have provided significant growth even for high withdrawal rates.

Performance of the RBICS sectors in the Russell 1000

RBICS sector returns for the period Jan-2000 to Jun-2020 were determined for the P123-Russell 1000 universe in order to find the worst performing sectors so that they could be excluded from the model. Performance for each of the twelve RBICS sectors with all stocks of the sector held equal-weight is shown in Table-1 and can be compared to the performance of benchmark SPY.

The model ranks stocks from the P123-Russell 1000 universe with a modified version of the P123 ranking system “Basic-Quality”, described as follows:

Basic ranking systems are those that focus on a single well-recognized investing style. This one identifies shares of the highest “quality” companies.

The factors used in this ranking system are:
1. Profit Margins
2. Turnover
3. Returns on Capital
4. Financial Strength

Subsequent to ranking the following buy rules are applied:

There are only two sell rules:

The model was originally optimized for the 15 year period starting in 2005. Subsequently the backtest period was lengthened by 5 years. Thus performance for the period 2000 to 2005 is out of sample. Backtests were performed for withdrawal rates ranging from 0% to 10%.

The simulated performance without withdrawals is shown in Figure-1, and the calendar year returns are in Table-2.  There is no market timing involved; trading costs and slippage were assumed to be about 0.15% of each trade amount. (For performance of models with 4% and 10% withdrawal rates see Figures-4 and -5 in the appendix.) 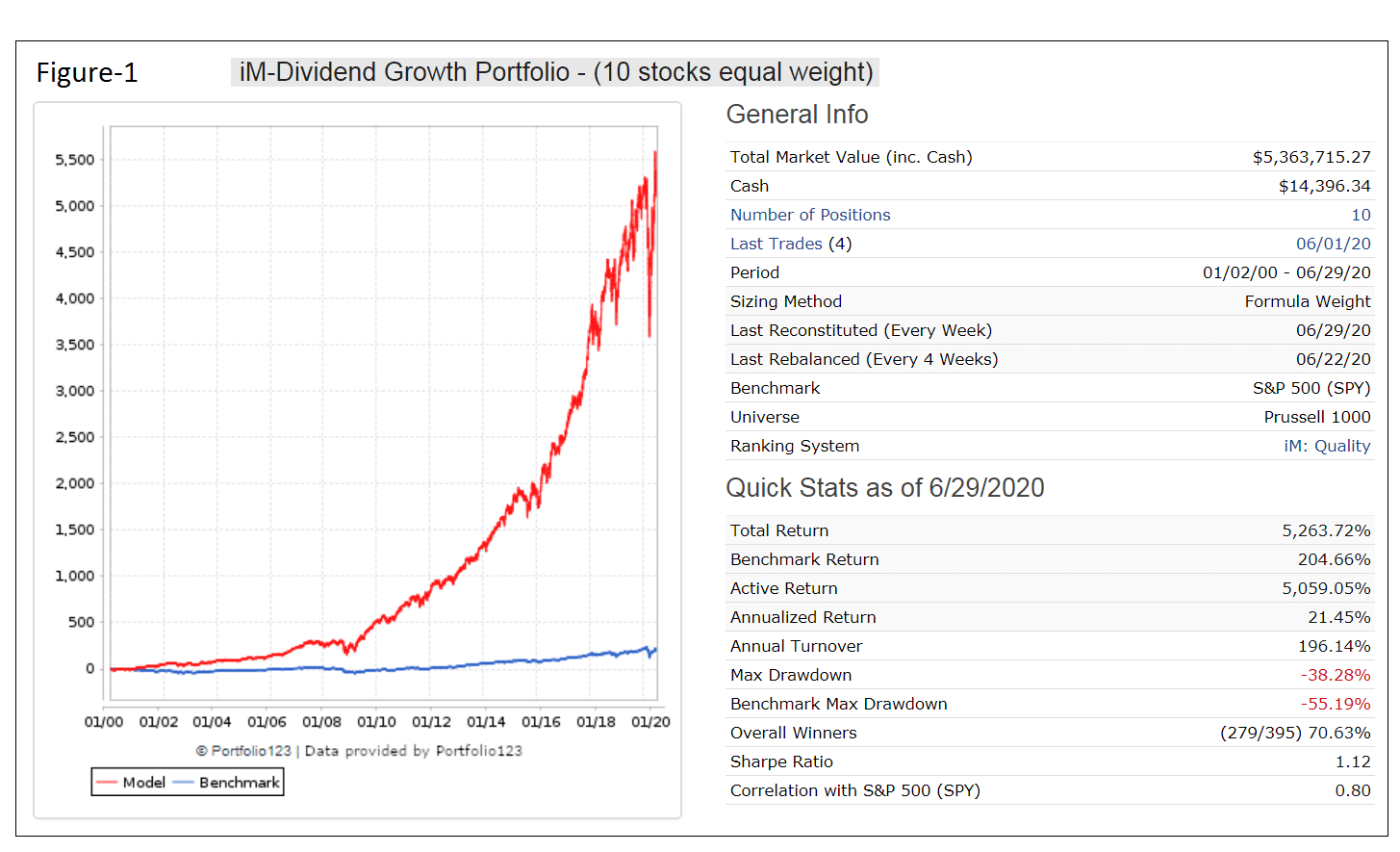 The model always produced excess returns over buy-and-hold SPY for all withdrawal rates, as shown in Table-3.

Also a withdrawal rate higher than 4% would not have increased the total withdrawal amount by much, while it would have significantly reduced the total growth amount over 20 years.  For example, raising the withdrawal rate from 4% to 5% would have caused an increase of only about $43,000 in the total amount withdrawn, but would simultaneously have reduce the end portfolio value by about $420,000.

The blue graph in Figure-2 shows for various withdrawal rates the total growth amount over this 20-year period (right side vertical axis) to which one has to add the starting capital of $100,000 to determine the end portfolio value on Dec-31-2019. 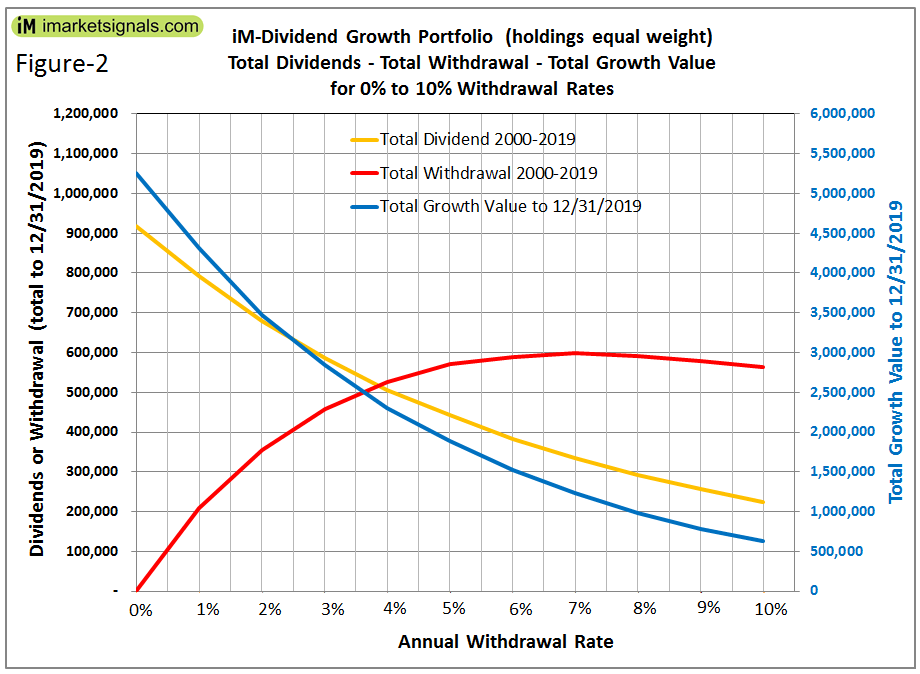 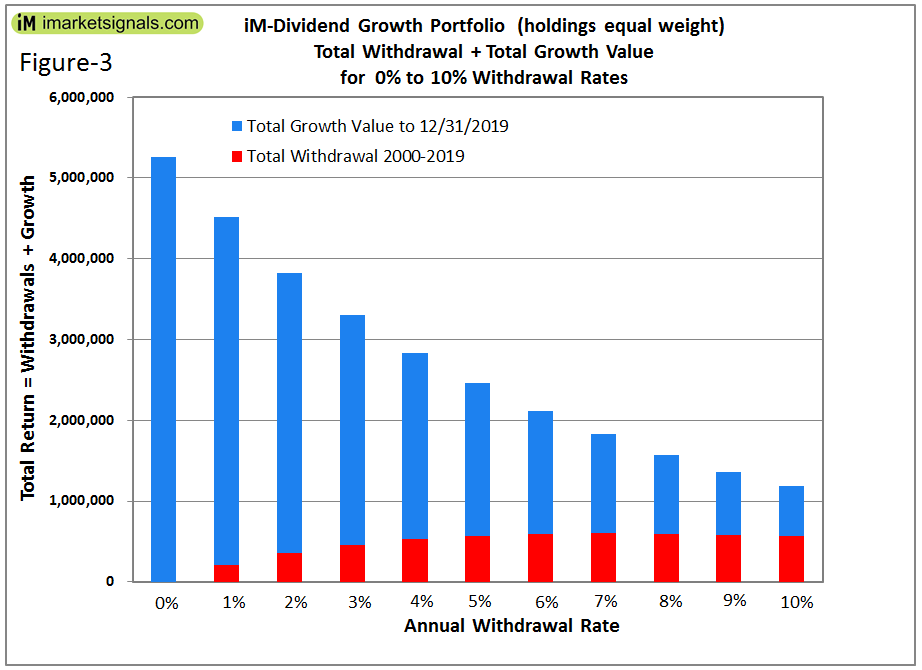 The analysis shows that following the iM-Dividend Growth investment strategy would have produced excellent returns, much preferable to a buy-and-hold investment strategy of stock index funds. High withdrawal rates should be possible without depleting the investment due to the high dividend yield achieved by this strategy, about 1.7-times the yield of SPY, and the exceptional growth performance.

Minimum trading is required as the rules specify this to occur only at the beginning of a month.

The current holdings are listed in the appendix.

At iMarketSignals one can follow this strategy where the performance will be updated weekly.

All results shown are hypothetical and the result of backtesting over the period 2005 to 2020. No claim is made about future performance. 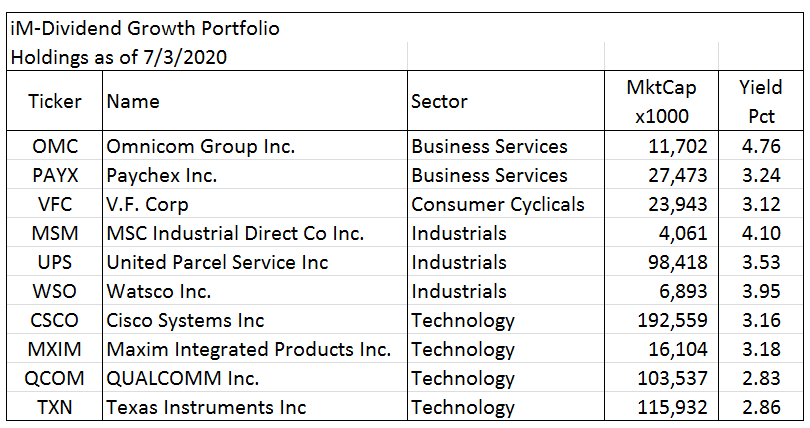 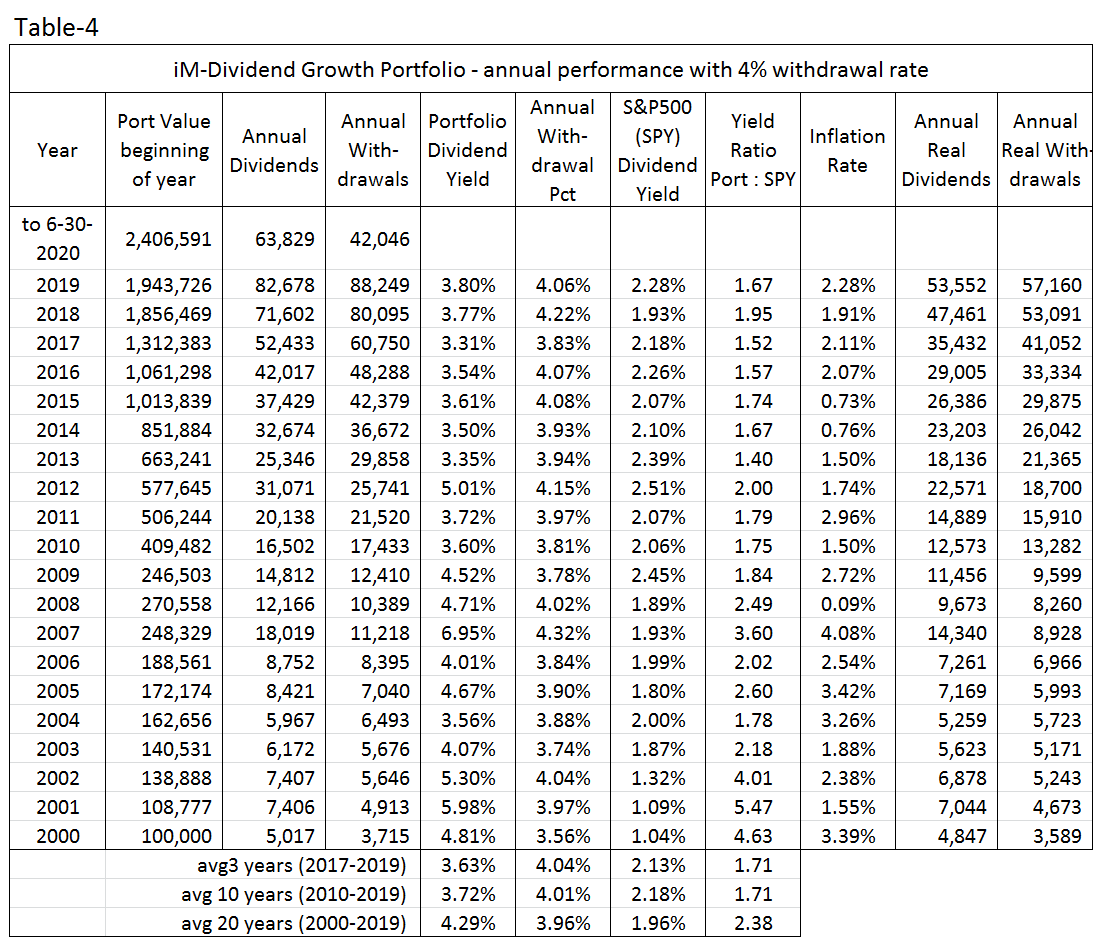 Even for a withdrawal rate of 10% this model shows a total return of about 3-times that of SPY over the backtest period.

17 comments on “A Dividend Growth Strategy for Perennial Income”

Posted on Jul 10, 2020 by Georg Vrba
← 17 Comments
With reference to Section 202(a)(11)(D) of the Investment Advisers Act: We are Engineers and not Investment Advisers, read more ... By the mere act of reading this page and navigating this site you acknowledge, agree to, and abide by the Terms of Use / Disclaimer