The parameters to determine the DAGS are the same as for the EAS:

From those four parameters the Financial Spread and the Real Spread are calculated:

The Enhanced Aggregate Spread is the difference between the Financial Spread and the Real Spread expressed in basis points (bps). It signals an upcoming recession when its level is at, or near 200 bps and falling.

The EAS is currently at 439 bps and would have to fall by about 240 bps in order to reach the recession warning trigger of 200 bps. The EAS recession trigger of 200 bps assumes that the EAS is trendless. However the EAS has a trend. If the trend is ignored, then there could be a long delay for the EAS value to reach 200 bps, and the next recession signal could arise late.

To establish the trend one can perform a linear regression analysis of the EAS over the entire length of the data set. The latest trend line is the upward sloping green line (Figure-1), which has an end value of 364 bps. The difference between the end values of the EAS and the trend line is 439 – 364 = 75 bps. 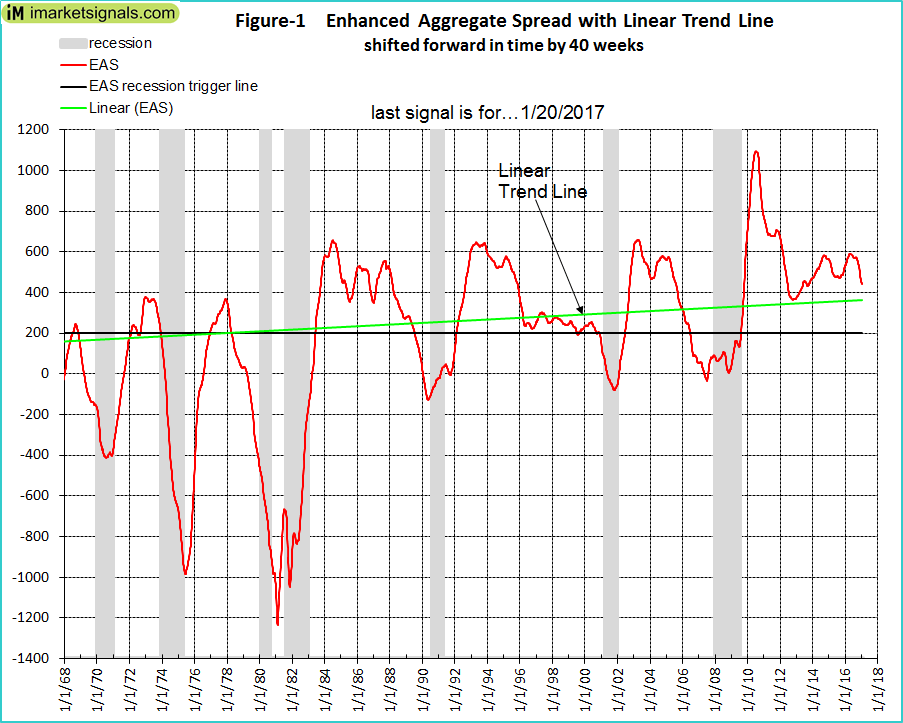 Trend lines differ for any previous end date of the data set. One example is the black “Previous Trend Line” shown in Figure-2. The Dynamic Linear Trend Line (DLT), the blue graph, is constructed by connecting the end points of all weekly trend lines obtained for data end dates from Jan-1968 onward. (Only two of the possible 2,520 weekly trend lines are shown for clarity.) 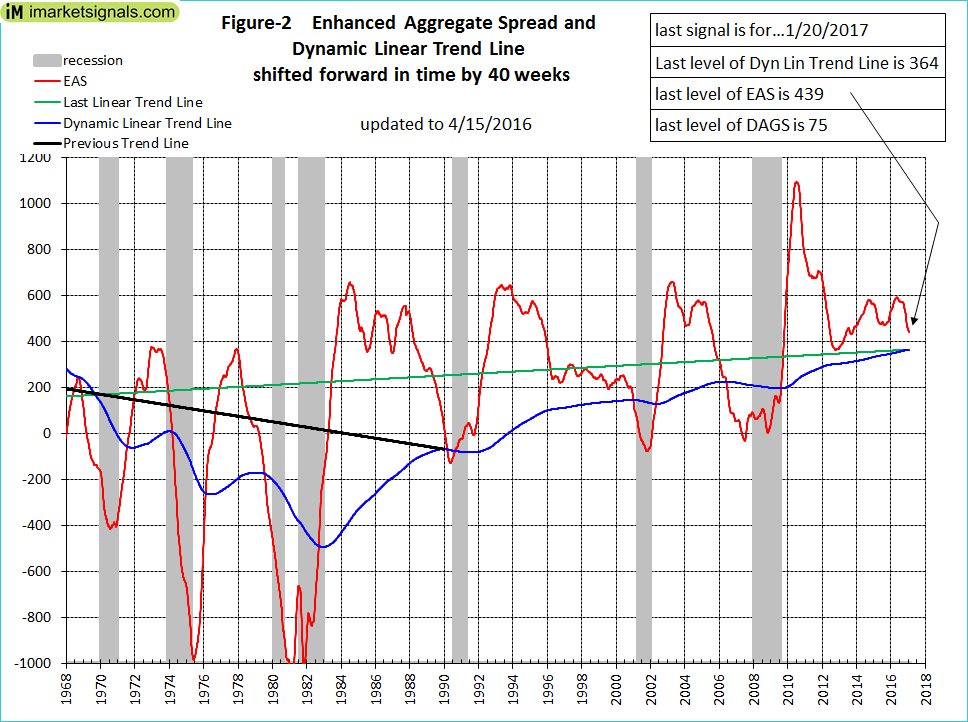 For example, the end value of the “Previous Trend Line” equaled the end value of the EAS in March 1989, signaling the oncoming 1990 recession about 15 months before the official July 1990 NBER cycle peak date. But because of the 40 week forward shift one would have known that the expansion phase of the business cycle was likely to continue to December 1989 as indicated in Figure-2.

Figure-3 shows the DAGS, which is the difference between the EAS and the DLT. When DAGS gets to zero it warns of a cycle peak (recession start). The most recent level of DAGS is 75 bps. Thus it would only require the EAS to decrease by this value for DAGS to signal a cycle peak, whereas the EAS would require a decline of 240 bps to reach the EAS recession threshold level of 200 bps. 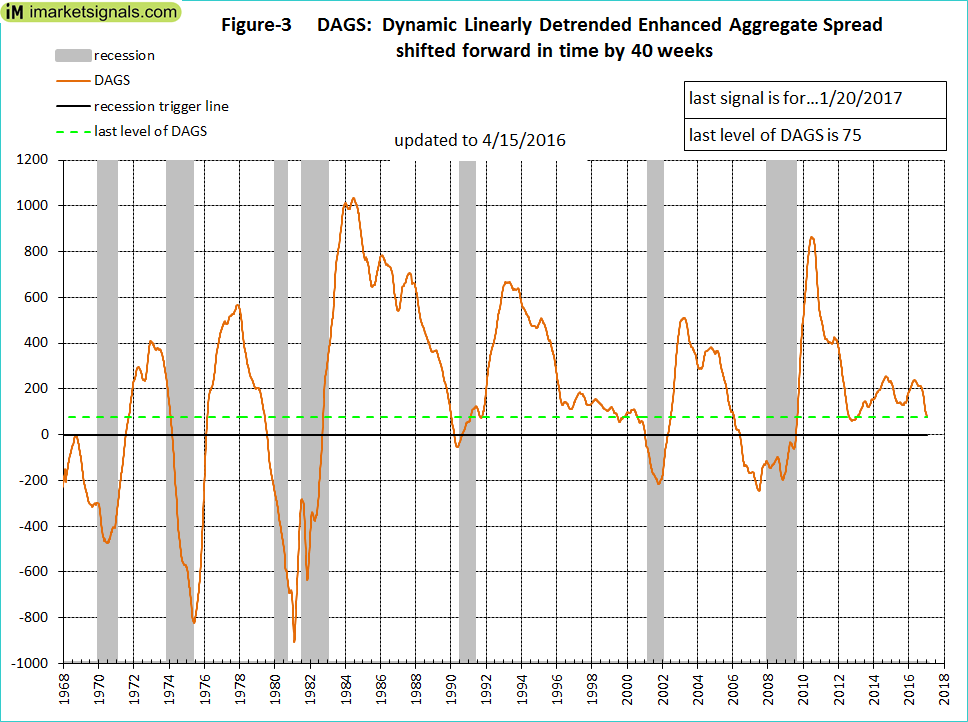 When will the DAGS signal an oncoming recession?

Assuming that the current trajectory of the DAGS does not change, then it will reach zero in the fourth quarter of 2016, signaling the possibility of a recession start 40 weeks later, in the third quarter of 2017. However the DAGS could rise again, as it did after January 2012 when it was at a similar level to where it is now.

Under current economic conditions the DAGS would indicate a cycle peak much earlier than the EAS, and when such a signal occurs there would be ample time to consult a set of coincident indicators to make a recession call.

What may cause the start of the next recession?

The 10-yr Note Yield and the Unemployment Rate add basis points to the EAS, whereas the Fed Funds Rate and the Inflation Rate subtract basis points from the EAS.

Accordingly, the changes to the model’s parameters which may be instrumental in bringing on a new recession are:

It is unlikely that that the 10-yr Note Yield and the Unemployment Rate will decrease much from their current levels. So it would appear that an increase of the Fed Funds Rate and/or Inflation Rate will be the most likely cause to shove the economy into recession.

Therefore it is not surprising that the FOMC is reluctant to increase the Fed Funds Rate, but the FOMC expects inflation to rise to 2 percent over the medium term as the transitory effects of declines in energy and import prices dissipate and the labor market strengthens further. The CPI has increased by about 0.7% over the first quarter of 2016, and if this trend continues then the inflation rate could easily be 2% by the end of 2016. This alone would subtract 115 bps from the EAS.

In December 2015, the Fed indicated that its expected target Fed-Funds Rate would approximate 1.375% by year-end 2016 through four subsequent increases. Since then, however, the Fed has moderated its expectation to two increases approximating 0.875% by year-end. This would subtract another 50 bps from the EAS.

Investors can get almost one year warning of an upcoming cycle peak by monitoring the level of the DAGS. The monthly updates of this long leading recession indicator DAGS (Dynamic Linearly Detrended Aggregate Spread) can be followed at iMarketSignals.com. The EAS (Enhanced Aggregate Spread) is updated at nospinforecast.com.

Posted on May 3, 2016 by Georg Vrba
← 6 Comments
With reference to Section 202(a)(11)(D) of the Investment Advisers Act: We are Engineers and not Investment Advisers, read more ... By the mere act of reading this page and navigating this site you acknowledge, agree to, and abide by the Terms of Use / Disclaimer