Home › blogs › US Treasury Bonds: When Will the Panic Buying End?

US Treasury Bonds: When Will the Panic Buying End?

The way to determine bond market direction is to interpret the change of the yield curve over time.  Our “Bond Value Ratio” (BVR), is based only on the daily yields-to-maturity of the 30-year Treasury bond and the 10-year note. Bond prices derive from those yields, and the relationship between those bond prices is captured by the BVR, which is an indicator of up or down bond-markets.  BVR increases if the price change of the 30-year bond exceeds the price change of the 10-year note, and vice versa.  When BVR is plotted as a graph against time, an upward slope indicates an up bond-market and conversely, a downward slope indicates a down bond-market.

Reference is made to the first three Bob Farrell rules:

Figure-1 plots BVR from 1986 to 2015 and its “best-fit” line determined from a regression analysis. The trend line represents the mean market direction referred to in Farrell’s rule one. The upper and lower offset limit lines from the best-fit curve establish a reference for the directional excesses referred to in Farrell’s rule two. When the BVR turns upwards from below a lower offset limit line an investment in a fund with high beta is indicated. When the BVR turns downwards from above an upper offset line it is prudent to remove one’s money from the high-beta fund and place it into a fund with low beta. This strategy invokes Farrell’s rule three, which is about excesses never being permanent. 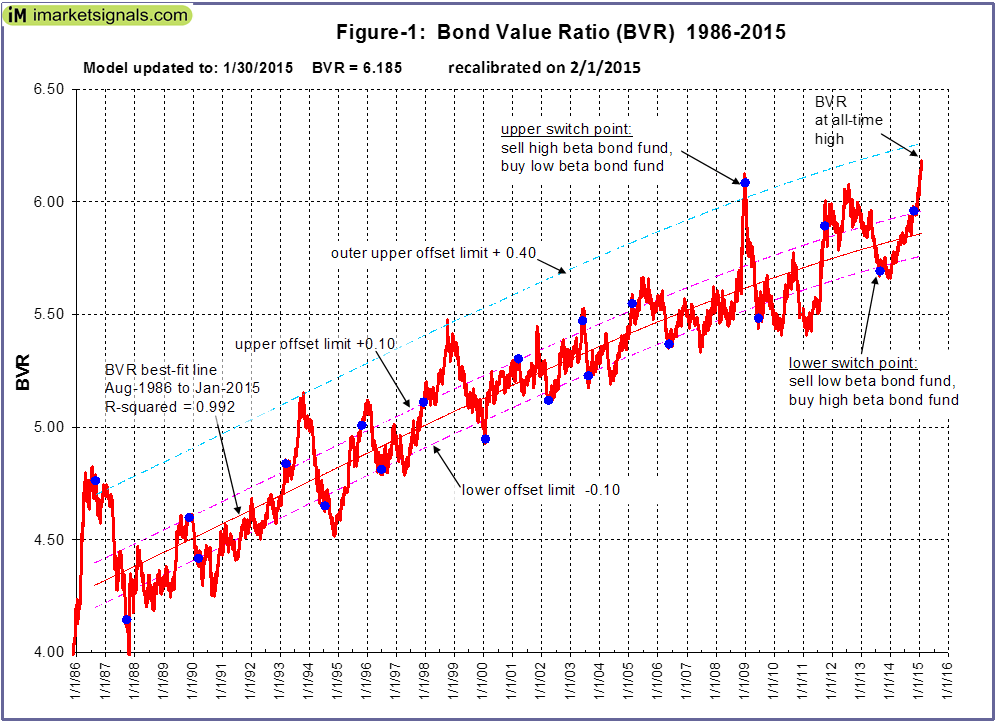 Also shown in Figure-1 is an outer upper limit line, offset by 0.40 from the trend line.  This line approximately connects the previous four highest peaks of the BVR.  One can see that the current level of BVR is near this line, but still below it.  Some upside for long Treasury bonds is possible, but probably not much.  There are no new eras — excesses are never permanent.  The BVR will decline again and interest rates will rise from the current lows.

(from Morningstar Report: Mutual Fund Data Definitions)
Beta, a component of Modern Portfolio Theory statistics, is a measure of a fund’s sensitivity to market movements. It measures the relationship between a fund’s excess return over T-bills and the excess return of the benchmark index. Bond funds are compared with the Lehman Brothers Aggregate Bond index. By definition, the beta of the benchmark (in this case, an index) is 1.00. Accordingly, a fund with a 1.10 beta has performed 10% better than its benchmark index–after deducting the T-bill rate–than the index in up markets and 10% worse in down markets, assuming all other factors remain constant. Conversely, a beta of 0.85 indicates that the fund has performed 15% worse than the index in up markets and 15% better in down markets. A low beta does not imply that the fund has a low level of volatility, though; rather, a low beta means only that the funds market-related risk is low.

9 comments on “US Treasury Bonds: When Will the Panic Buying End?”

Posted on Feb 5, 2015 by Georg Vrba
← 9 Comments
With reference to Section 202(a)(11)(D) of the Investment Advisers Act: We are Engineers and not Investment Advisers, read more ... By the mere act of reading this page and navigating this site you acknowledge, agree to, and abide by the Terms of Use / Disclaimer