Home › blogs › Trading the Beer-, Spirits-, Tobacco-, & Gambling-Stocks of the S&P500 With the iM-BESTOGA-3 System

Trading the Beer-, Spirits-, Tobacco-, & Gambling-Stocks of the S&P500 With the iM-BESTOGA-3 System

The number of BESTOGA stocks in the S&P500 varied from a minimum of six to a maximum of ten over the backtest period Jan-2000 to Oct-2015, all as shown in the #Pos bar-chart of Figure 1. 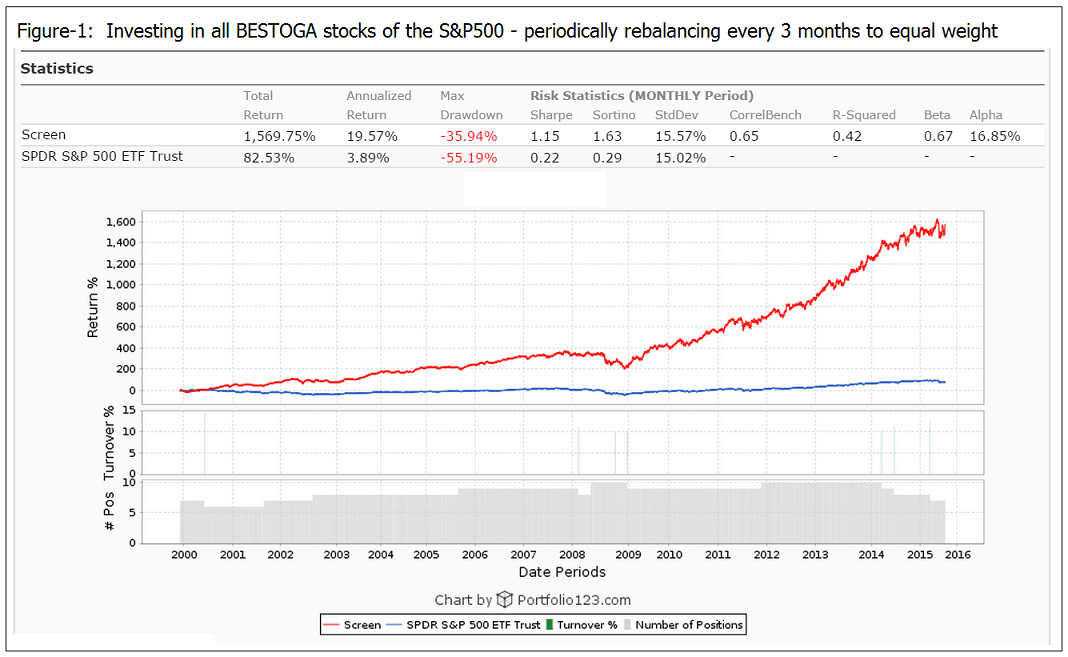 Figure 1 shows the performance of an equal weighted investment in all available BESTOGA stocks of the S&P500 from beginning of January 2000 to October 2015, when rebalanced to equal weight every three months. The annualized return was a high 19.6% with a maximum drawdown of -35.9%. This is considerably better than the 3.9% return of SPY (the ETF tracking the S&P500 adjusted for dividends) with a -55.2% drawdown. Thus continuously only holding the BESTOGA group of the S&P500 would have been a very good investment. Currently there are only seven stocks in this group.

Figure 2 shows the performance of an equal weighted investment in three BESTOGA stocks (selected by a ranking system) from January 2000 to October 2015, when rebalanced to equal weight every three months. The annualized return would have been 22.9% with a maximum drawdown of -29.9%. 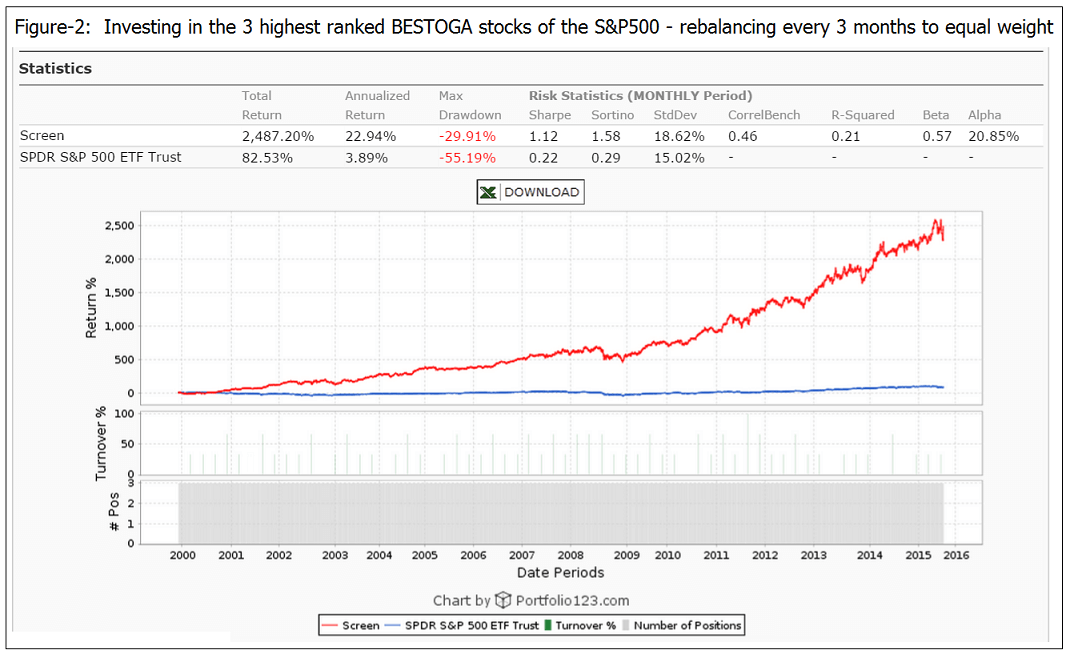 Models with ranking systems should provide higher returns with lower drawdowns than an investment in all the available stocks. The BESTOGA-3 system selects periodically three of the highest ranked stocks from the S&P500 BESTOGA universe. The model was backtested using the on-line portfolio simulation platform Portfolio 123.

The models use the ranking system of our Best8(S&P500 Min-Volatility) system.

Stocks are bought and sold at the next day’s closing price after a signal is generated. Variable slippage of about 0.12% of a trade amount was applied to provide for transaction slippage and brokerage fees. Market-timing, based on moving average crossovers of SPY, is contained only in the buy rules. Position weight is kept approximately equal by applying a sell rule to effect this.

This model does not require hedging during adverse market conditions because of its good performance during down-market periods, as shown in the figures below for the periods Jan-2000 to Dec-2003, and Jan-2007 to Dec-2009. 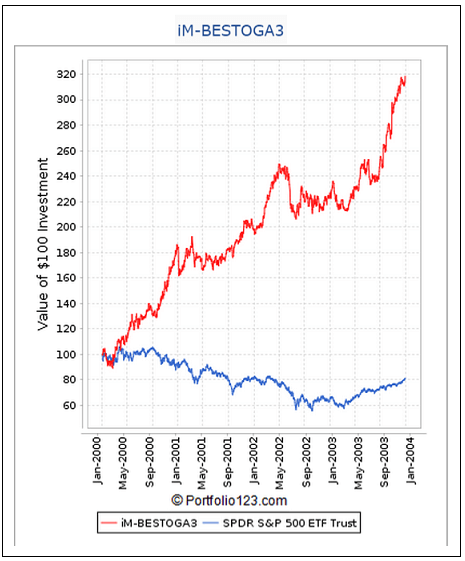 An analysis of all the realized trades is shown in Table 1. There were 40 winning trades out of 68, resulting in a win rate of 59%. The average yearly turnover was about 130%. On average a position was held for 246 days. There were 10 winners held longer than one year, resulting in a Tax Efficiency of 51% for this model 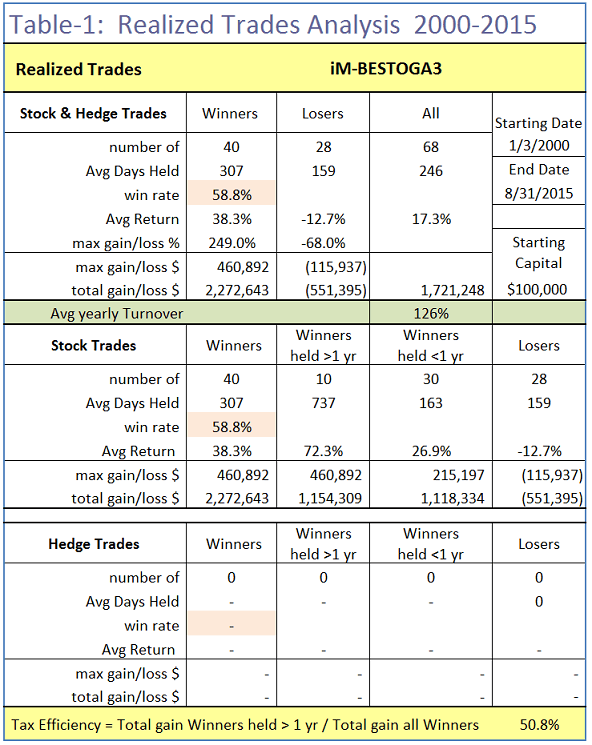 In the Figures 3 and 4 below the red graph represents the model and the blue graph shows the performance of benchmark SPY. 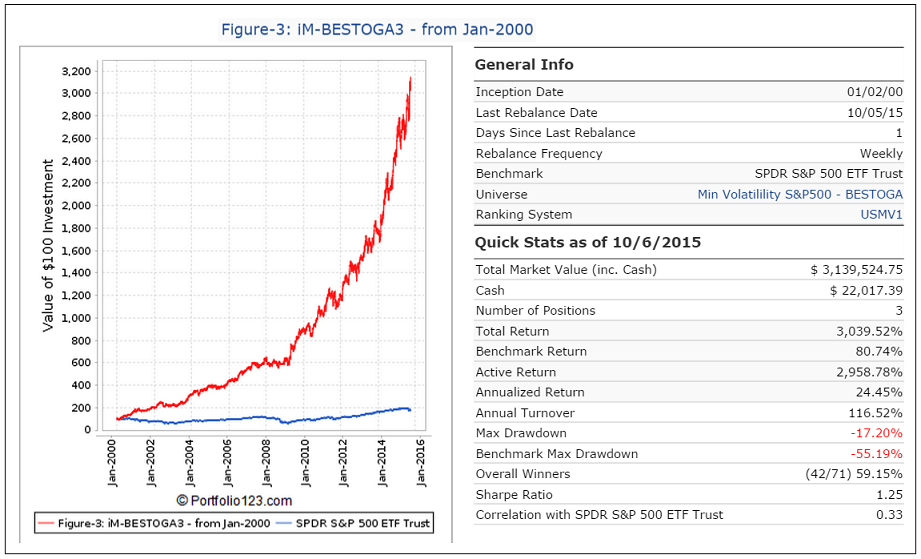 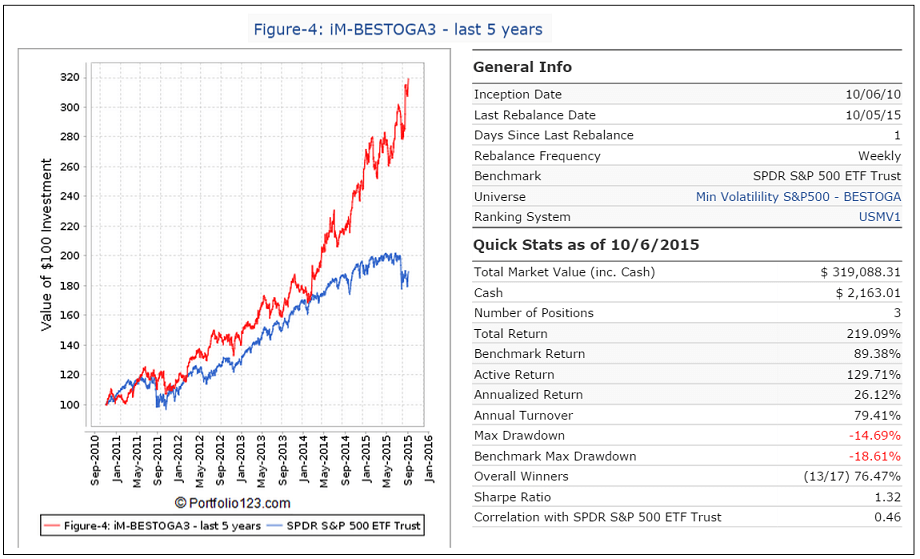 Figure 5: The histogram of 30-month returns with weekly displaced start dates shows that for all 692 samples the period return ranged from 0% to 157%, with the average return being 61%. The histogram follows a normal distribution with 73% of the samples’ period returns being within 1 standard deviation away from the mean.

Table 2 lists the annualized returns, maximum drawdown, and various risk measurements for the trailing three years and for the full backtest period.

Currently this model holds TAP, PM, and MO, all large-cap stocks with ample liquidity for the normal investor.

This model can be followed live at iMarketSignals, where it will be updated weekly together with our other trading models.

One should be aware that all results shown for the BESTOGA-3 system are from a simulation and not from actual trading. All results are presented for informational and educational purposes only and shall not be construed as advice to invest in any assets. Out-of-sample performance may be much different. Backtesting results should be interpreted in light of differences between simulated performance and actual trading, and an understanding that past performance is no guarantee of future results. All investors should make investment choices based upon their own analysis of the asset, its expected returns and risks, or consult a financial adviser. The designer of this model is not a registered investment adviser.

Posted on Oct 9, 2015 by Georg Vrba
← 17 Comments
With reference to Section 202(a)(11)(D) of the Investment Advisers Act: We are Engineers and not Investment Advisers, read more ... By the mere act of reading this page and navigating this site you acknowledge, agree to, and abide by the Terms of Use / Disclaimer