The original Floor-Leverage Rule for Retirement, as proposed by Scott and Watson, calls for two parallel investments. The first one is to establish a low risk Spending Floor Portfolio with 85% of one’s funds. The second, the Surplus Portfolio, is an investment of the remaining 15% in equities with 3× leverage. If the Surplus Portfolio exceeds 15% of the total portfolio value at annual rebalancing when withdrawals are made, it is adjusted to 15% of the total portfolio value with the excess being transferred to the Spending Floor Portfolio. The problem is that 3× leveraged stock portfolios can lose most of their value. For example, they lost 94% from 2000 to 2008, which would have wiped out almost 15% of retirement capital if one had followed the Original Floor-Leverage Rule. A better approach, and one that could avoid such losses, is to time one’s exposure to equities as put forward by our Improved Floor-Leverage Rule, which is a low-risk spending and investment strategy for retirees.

The analysis shows, that applying the MAC-System (backtested over 65 years) to time Surplus Portfolio investments in either 3× leveraged equities or Treasury bond funds would have provided fairly good returns. The annual returns for 1999 to 2013 are listed under MAC-UPRO in Table-3 in the Appendix and the performance is shown in Figure-1. The MAC-System is not some secret dataset to which only we have access. All the data is available to analysts and the buy and sell rules have been published several times, making the MAC easily reproducible.

For the analysis, the CREF Inflation-Linked Bond Account (CREFb) or the Vanguard Inflation-Protected Security Fund (VIPSX) appear to be reasonably low risk bond funds suitable for the 85% Spending Floor investment. The CREF Account was chosen because its inception was in 1997, whereas VIPSX was only available from the middle of 2000 onward. The investment period for this analysis is from Jan-2-1999 to Jun-30-2014. Over this period the CREF Account produced an annualized average return of 6.1% with a maximum drawdown of -14.3%.

The Original Rule calls for 15% of one’s retirement funds to be in a Surplus Portfolio holding 3× leveraged equities. The Improved Rule stipulates that the investment goes to the 3× leveraged UltraPro S&P500 ETF UPRO only for those periods when the MAC-System signals exposure to stocks; and during the other periods it goes to IEF, the iShares 7-10 Year Treasury Bond ETF.

The Surplus Portfolio model, MAC-UPRO, without annual adjustments, was backtested on Portfolio123, a web-based portfolio simulation platform, from Jan-2-1999 to Jun-30-2014 and produced an annualized average return of 22.8% with a maximum drawdown of -47.0% over this period. There were only 10 realized trades and one unrealized trade, all of them winners. It is also tax efficient because on average a position was held for 477 days, and long-term capital gains tax would apply if not traded in a tax-deferred account. In Figure-1 the red graph shows the simulated performance of MAC-UPRO, and the blue graph represents the performance of the S&P 500. 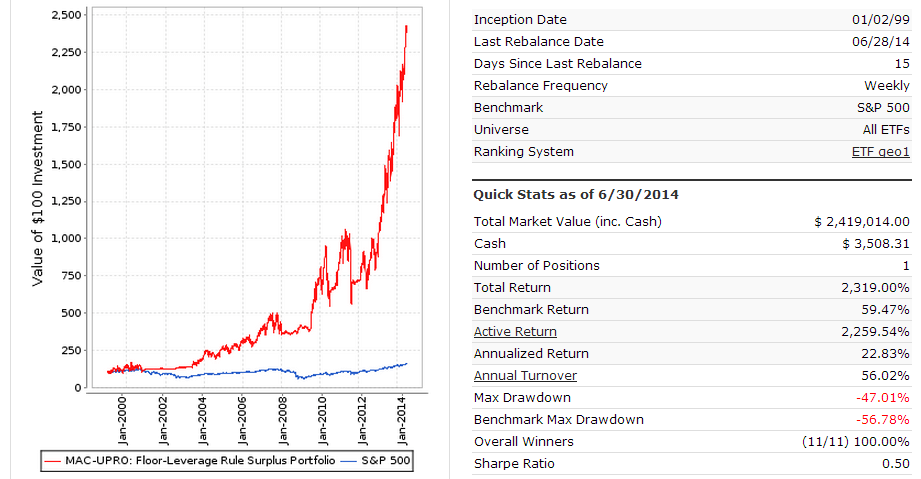 Assuming that no funds are withdrawn from the Spending Floor Portfolio, then the combined portfolio (85% Spending Floor and 15% Surplus) would have shown an annualized average return of 9.2% with a maximum drawdown of only -12.1%. The return is much higher than the 6.1% for the CREF Account alone, and the maximum drawdown is also better. The performance of an initial $100 investment following the Improved Rule is represented by the red graph in Figure-2, and can be compared with the blue graph, which depicts the performance when following the Original Rule. 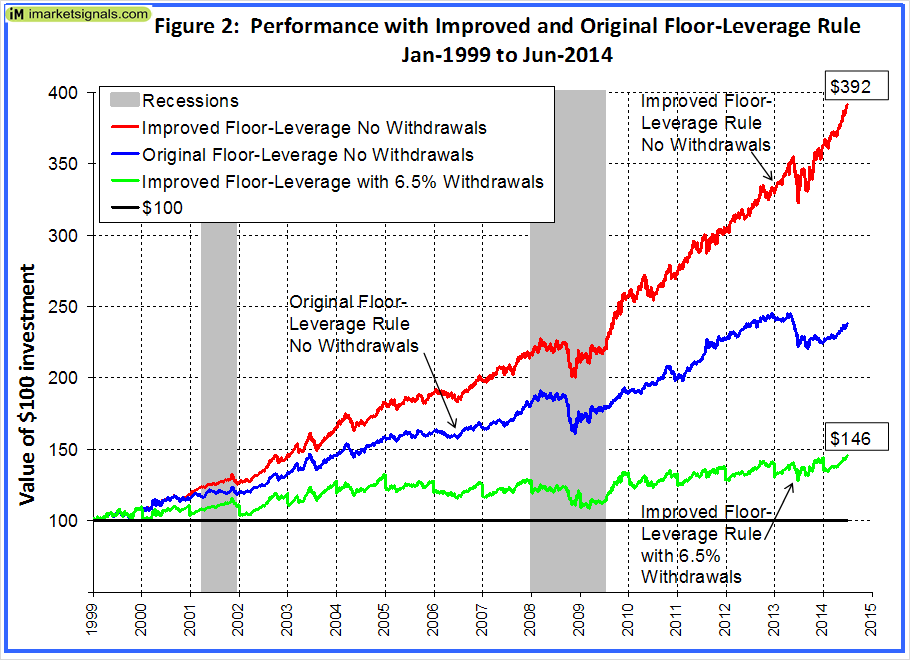 Following the Improved Floor-Leverage Rule (annually moving funds exceeding 15% of the total portfolio value from the MAC-UPRO Surplus Portfolio to the Spending Floor Portfolio; and simultaneously making one’s annual spending withdrawals), then the allowable withdrawal rate was found to be 6.5%. The performance over time is shown by the green graph in Figure-2 where the end of the year withdrawals are indicated by the vertical portions of the graph. Note that the remaining investment capital was always more than the $100 initial investment; and the end value was $146, the inflation adjusted value of the $100 starting capital.

As one can see in Table-1, the Original Floor-Leverage Rule model produced the lowest allowable withdrawal rate. It would have been better to invest in the CREF Account alone. However, if one had followed the Improved Floor-Leverage Rule model one could have increased one’s annual withdrawals to 6.5%, which is significantly more than what the popular retirement strategy in use today, the 4% Rule, allows. Also, one would still at the end have had $146 left in one’s retirement account for every $100 of starting capital, i.e. a real $100.

It is also apparent that the popular life-cycle funds are not the low risk investments they are made out to be. A 70% bonds – 30% stocks fund would have produced the highest drawdown without a commensurate higher return. One can see from Table-2 that the Improved Floor-Leverage Rule strategy would have provided the highest return with the lowest drawdown; surprisingly a strategy which uses a high risk 3× leveraged ETF actually manages to be the lowest risk alternative of the four models.

Retiring in 1999 and using an investment strategy based on Scott and Watson’s Floor-Leverage Rule would have turned out to be a very poor decision. A retiree would have lost her entire investment in the Surplus Portfolio by 2008, 15% of her retirement capital. A 3× leveraged ETF would have lost 86% from January to December 2008 alone, when MAC-UPRO gained 3% over the same period. It is doubtful that a retiree “…was likely delighted that her loss represented only 13% of her total wealth…” to quote Scott and Watson. One can expect similar market declines in the future and, applying the Original Floor-Leverage Rule, this will almost guarantee a permanent loss of some capital during one’s retirement years.

Regardless of one’s retirement date, retirees with moderate to low risk tolerance should always be able to do better by following iM’s Improved Floor-Leverage Rule. This Rule uses the MAC-System (which seeks to identify up- and down-market periods) to time one’s investments in the 3× leveraged ETF. During up-market periods the 15% is invested in the 3× ETF  would be equivalent to allocating approximately 45% to stocks. When the MAC-System signals down-markets the 3× ETF is sold and replaced with a 7-10 Year Treasury Bond ETF, providing a 100% investment in bonds for the portfolio during those down-market periods.

This strategy is easy to implement because there are relatively few transactions required. It should over time always provide better returns than holding the 3× leveraged ETF continuously in the Surplus Portfolio. Moreover, the simulated performance of an investment following the Improved Floor-Leverage Rule, from 1999 to 2014, a period with two recessions and two huge market declines (-49% to Oct-2002 and -57% to Mar-2009), shows that one’s initial retirement capital would not have been reduced by a 6.5% withdrawal rate.

The MAC-System has been backtested over almost 65 years and has performed well over this long period. Weekly updates of the system are available on our website iMarketSignals.com every Friday. 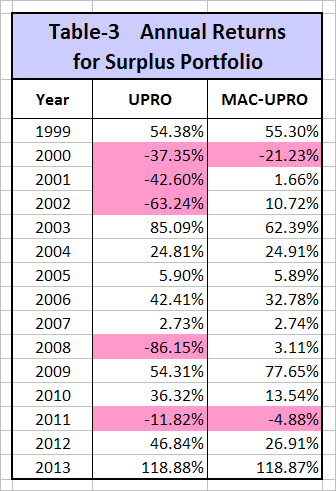 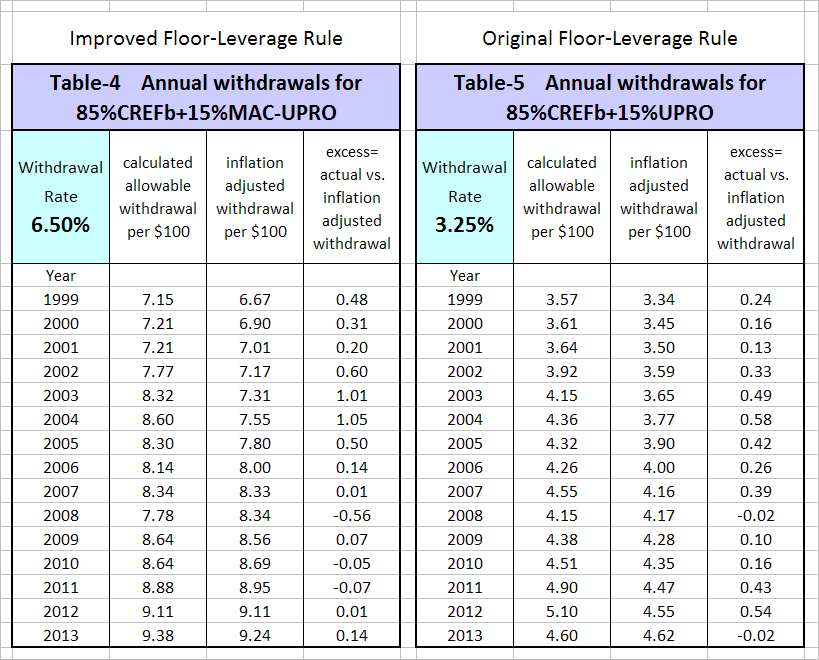 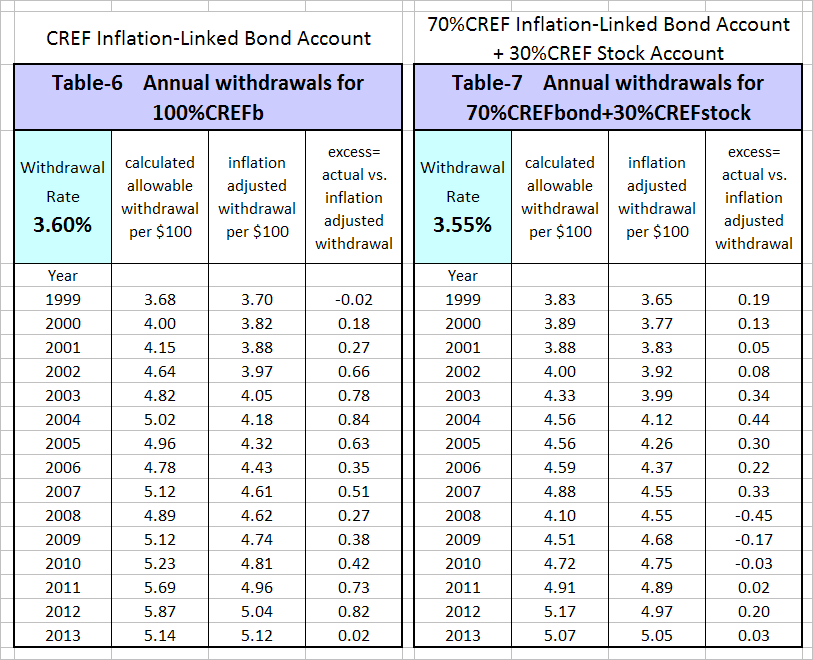 Posted on Jul 18, 2014 by Georg Vrba
← 5 Comments
With reference to Section 202(a)(11)(D) of the Investment Advisers Act: We are Engineers and not Investment Advisers, read more ... By the mere act of reading this page and navigating this site you acknowledge, agree to, and abide by the Terms of Use / Disclaimer