Home › blogs › Backtesting the MAC-System – How Long is Long Enough?

Backtesting the MAC-System – How Long is Long Enough?

Most of us entrust our savings to financial organizations in the belief that this will provide us with better investment results than we could have achieved ourselves. These companies advocate a buy-and-hold strategy of bond- and stock funds, charge fees, and usually perform poorly. A convenient way to improve on buy-and-hold and to do better than financial organizations is to periodically switch one’s investment from stocks to bonds and vice versa as indicated by the Moving Average Crossover MAC-system. The MAC-system (described in Beyond the Ultimate Death Cross) uses cross-overs of moving averages of the S&P 500 to determine investment periods for the stock- and bond market.

The MAC-system has the attributes needed to make it a believable market timing model:

Daily data for the S&P500 to determine the moving averages is from Yahoo!Finance. Dividend adjusted values of SPY, the ETF which tracks the S&P500, can be obtained from Jan-9-1993 onward. For the preceding time period to Jan-3-1950 a synthetic SPY was calculated using daily data of the S&P500 and monthly dividends from Robert Shiller’s S&P data series.

Values for IEF, the iShares 7-10 Year Treasury Bond ETF are available from July 2002 onward. From 1950 to 2002 the 10-year Treasury Note yield was used to determine bond values at start and end of bond market investment periods. Daily yield data is available from January 1962 and prior to that monthly values are from Shiller’s data series. For an example of calculating bond returns see the Appendix.

The model generated 61 investment periods, 31 for stocks and 30 for bonds as listed in the Appendix. There were only 8 periods which produced negative returns ranging from -0.1% to -9%. For an investment made in the beginning of 1950 the return to May-22-2014 would have been 3.5 times more from the MAC-system than what buy-and-hold of SPY produced, $100 would have grown to $311,000.

The model generated 13 investment periods from November 1998 to May 2014. There was only one period producing a negative return (0.26%). The absolute return of an initial investment to May-22-2014 would have been 2.4 times bigger from the MAC-system than what one would have had from buy-and-hold of SPY.

For this simulation the MAC-system was designed to either select IEF or TLT as the bond fund depending on which was higher ranked at the time when MAC signaled the beginning of a bond market investment period. Also the simulation results differ slightly from those of the spreadsheet calculation because the criteria were evaluated only at the end of each week and due to differences in the way exponential moving averages are calculated for the two analyses. However, returns are similar as one can see from Figure-1. 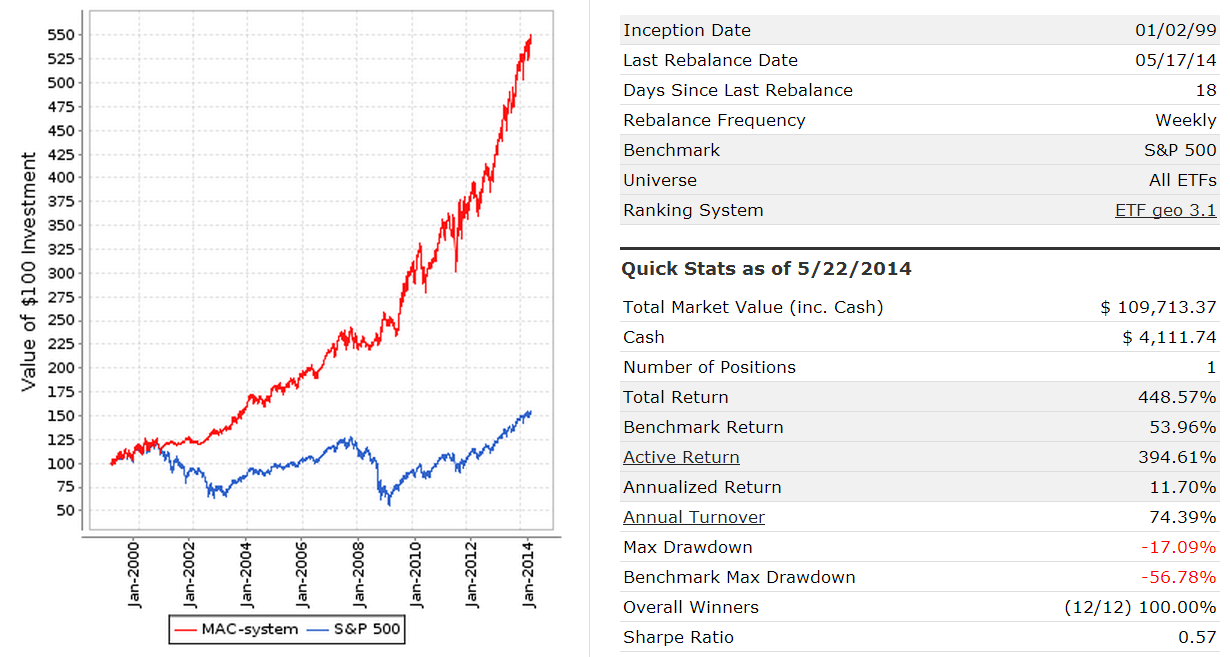 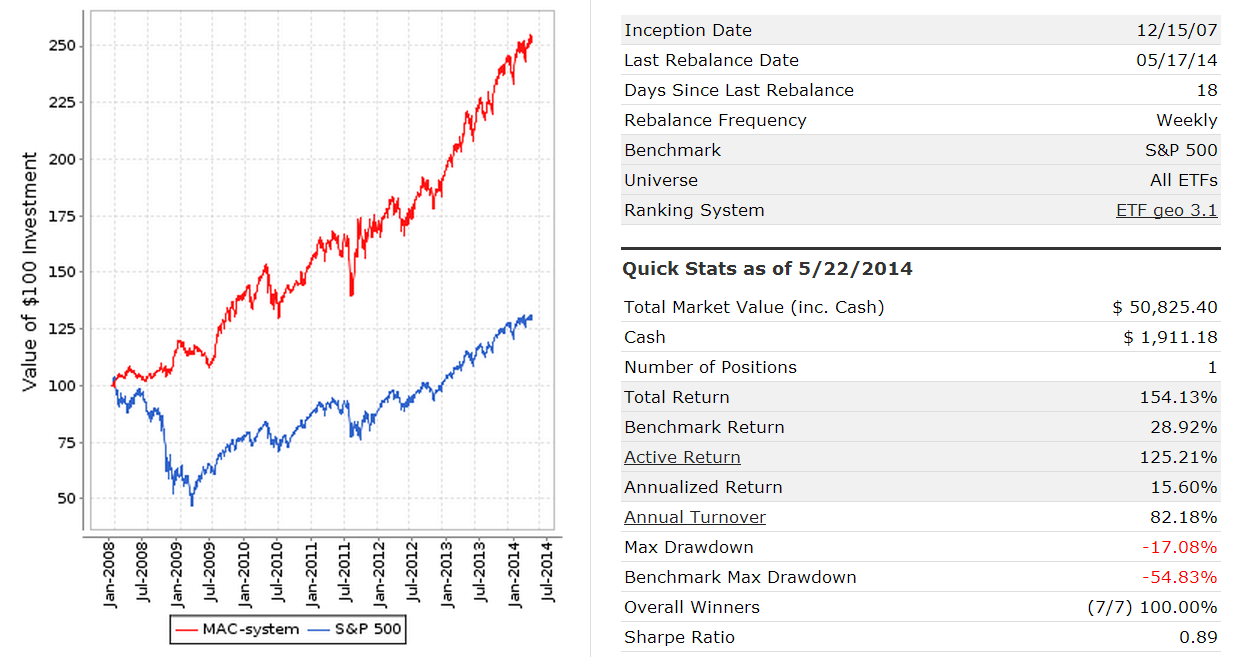 For the same period, a combination of two of oldest variable annuity accounts of financial service organization TIAA-CREF, 60% CREF Stock and 40% CREF Bond returned 31.9% for an annualized return of 16.6%. The lesser performance of the usually recommended 60:40 stock-bond fund combination highlights the advantage of following the MAC market timing system.

Past performance is no guarantee of future performance. However, this model has now been backtested over almost 65 years and has performed well. How much longer must one backtest? Surely 65 years is long enough.

Weekly updates of the system are available on our website every Friday and can be viewed at no cost the following Monday evening.

This is an approximate calculation and abbreviations are as follows:

22 comments on “Backtesting the MAC-System – How Long is Long Enough?”

Posted on Jun 5, 2014 by Georg Vrba
← 22 Comments
With reference to Section 202(a)(11)(D) of the Investment Advisers Act: We are Engineers and not Investment Advisers, read more ... By the mere act of reading this page and navigating this site you acknowledge, agree to, and abide by the Terms of Use / Disclaimer