In July 2012 Albert Edwards, the closely followed investment strategist at Société Générale, warned that the S&P 500 was “on the verge of an ultimate death cross,” foretelling imminent major losses for the stock market, with the S&P 500 possibly seeing its index halved to 666 points.  The ultimate death cross occurs when the 50-month moving average of the S&P moves below the 200-month moving average, or put another way, when the difference between these moving averages – the spread – becomes less than zero.

In this Jul-2012 article I reasoned that an ultimate death cross could not occur, predicting that the spread would form a trough before the end of 2012, and that this event would be a macro signal for a new bull market.

In a follow up early Nov-2012 article I showed that the spread’s lowest level would be 8, expected to occur at the end of Nov-2012, and that from then onwards the level would increase at least until Aug-2013, irrespective of the movement of the S&P 500.

It is now one year after the spread made a trough, so let’s see what really happened: 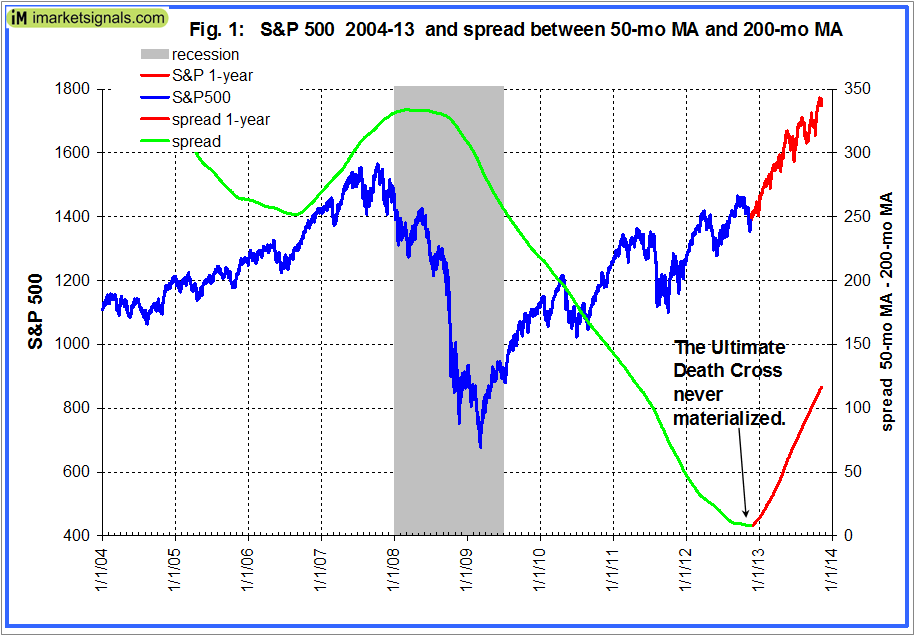 In the table below are the occurrences of all the previous trough formations of the spread since 1897 and the subsequent performance of the stock market.  A trough formation close to zero is a rare event, having occurred only on five previous occasions, not counting the one of Nov-2012. 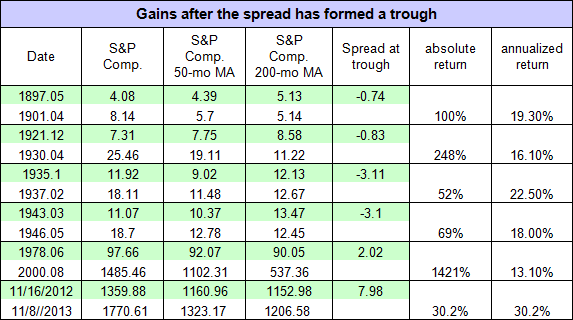 The previous trough occurred 35 years ago and heralded the bull market which only ended in 2000.  Historically, troughs of the spread close to zero always provided a positive outlook for the market.  It would appear from the performance of the market since last November’s trough that a repeat of history may be in the making.  So far the market has “only” gained 30%, and this would appear to be on the low side when compared to previous gains after troughs.

The conclusion of my July 2012 article stands.  The signal “….. provided a positive forecast for the stock market. It was never a harbinger of doom, but actually was a bearer of good tidings.

Tagged with: 2020
Posted in blogs, featured

3 comments on “The Ultimate Death Cross – One Year Later”

Posted on Nov 15, 2013 by Georg Vrba
← 3 Comments
With reference to Section 202(a)(11)(D) of the Investment Advisers Act: We are Engineers and not Investment Advisers, read more ... By the mere act of reading this page and navigating this site you acknowledge, agree to, and abide by the Terms of Use / Disclaimer