Estimating Stock Market Returns to 2020 and Beyond: Update January 2014

A major bull market may have commenced in 2009 for which evidence was presented in various 2012 commentaries (Appendix A), and also in this article which included a statistical analysis of the historic data of the S&P Composite, updated here.  Since August 2012 the S&P500 has gained a real 30% to the end of 2013.  So what further gains can we expect?

Nobody knows, and the best we can do is to use the historic data (which is from Shiller’s S&P series) to guide us to make estimates for the future. From the real price of the S&P-Composite with dividends re-invested (S&P-real) one finds that the best fit line from January 1871 onward is a straight line when plotted to a semi-log scale. There is no reason to believe that this long-term trend of S&P-real will be interrupted.  S&P-real and the best fit line together with its prediction band are shown in Figure 1, updated to Dec-2013. (See appendix B for the equations.)

Also shown is the Cyclically Adjusted Price to Earnings Ratio P/E5 (which is the real price of the S&P divided by the average of the real earnings over the preceding 5 years), currently at a level of 26.1.

One observes that whenever S&P-real “bounced-off” the lower extreme of the prediction band and P/E5 moved from below to above 13.4 a bull market always followed. The last time this occurred was in March 2009. Since then S&P-real has “only” gained about 140%. Comparing this to previous post-bounce-off-gains (which ranged from 300% to 1720%) then one could conclude that there is some steam left in this bull market with further gains to come. 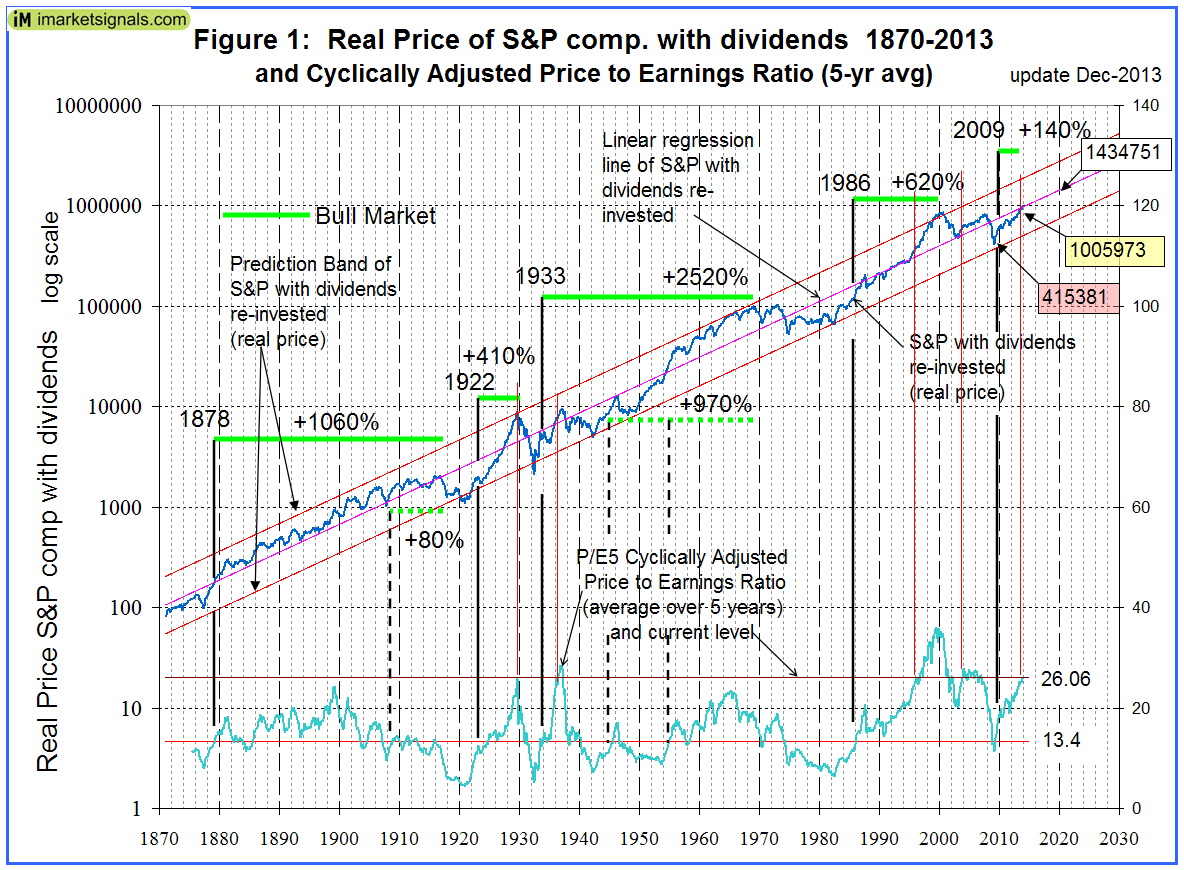 Thus the historic trend forecasts a probable gain of about 40% for S&P-real over the next six years. The worst scenario would be a possible loss of about 25%, and the best outcome would be an approximately three-fold increase of the current price.

What other analysts expect

Commentators, such as Butler|Philbrick and Hussman warned us in December 2011 that the markets then were expensive and overbought, and that one could only expect very low returns going forward over periods as long as 20 years.  Figure 2 shows the current situation in more detail and also includes the levels of S&P-real as per Butler|Philbrick (B|P) forecast, indicated by the red markers connected by the dashed red line. 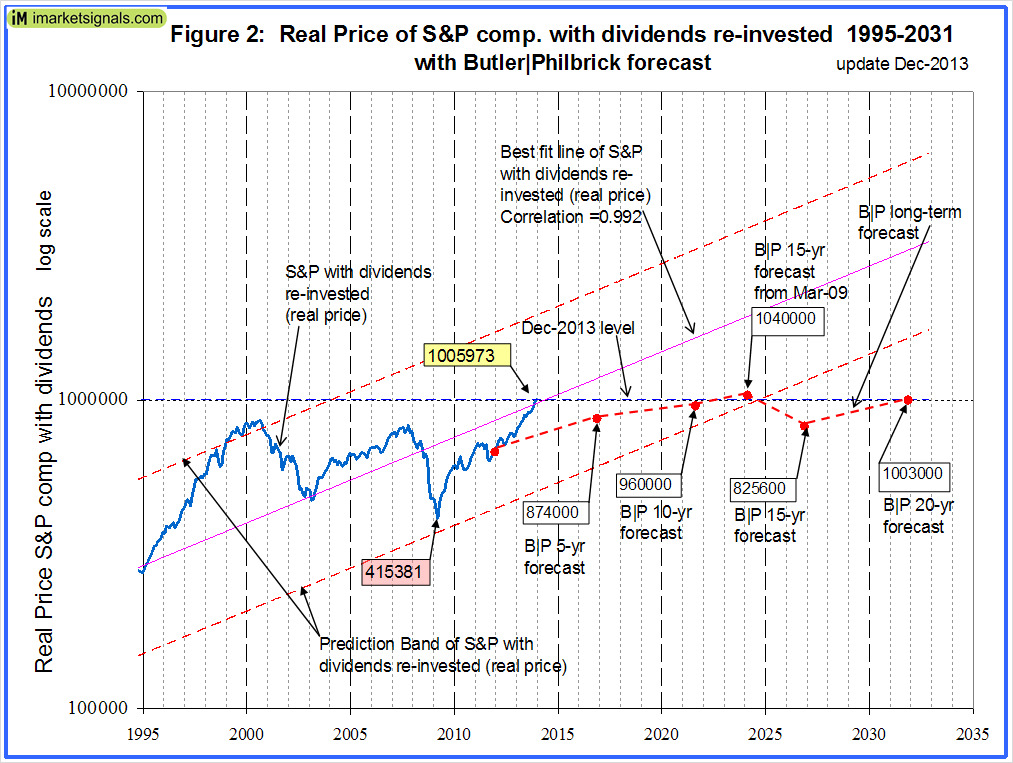 From December 2011 onward B|P predicted a real annual return for the stock market of only 1.46% for 15 years, and 2.08% for 20 years (Table 1 in their article and Appendix C below).  Also they forecasted a 6.48% annual return from March 2009 to March 2024 (Table 2 in their article).  One can see that the March 2024 level is quite possible as it is just above the lower extreme of the prediction band, but it would appear that the December 2026 and 2031 forecasts are overly pessimistic.

If one applied B|P’s anticipated 1.46% growth rate for 15 years then S&P-real would only be 24% higher by the December 2026 from where it was in December 2011. So far, to the end of December 2013, the S&P with dividends has gained 57.7% from the time when their article was published on December 14, 2011. This equates to a  gain of 56% in real terms for the first 2 years of the 15 year forecast period.  If one believed B|P’s forecast, then one can logically only expect a loss for S&P-real for many years ahead.  It also means, that if one takes such forecasts seriously, it would be complete folly to invest in the stock market for the next two decades, because the current level of S&P-real is already above B|P’s 5-yr, 10-yr, 15-yr, and 20-yr forecast levels.

One observes from Figure 1 that presently S&P-real is where it should be; its level borders on its long-time historic trend line.

The P/E5 is at a high level of 26.1, which may indicate an overvalued market, but its graph has an upward slope.  Similar conditions prevailed only 4-times in the past:  in 1929, 1936, 1995 and 2003.  Only after one occasion, in 1929, was it followed by a significant market decline; however, at that time the S&P-real was located at the upper extreme of its prediction band.  At the three other occasions the S&P-real was near its long-term trendline, as it is now, and the market continued to advance for several years thereafter.

Long-term investors should also heed Shiller’s recent warning, and consider the level of the Shiller P/E10 ratio, currently at 25.4. He states that the plot of P/E10  “confirms that ……Long-term investors would be well advised, individually, to lower their exposure to the stock market when it is high, ….., and get into the market when it is low.”  The plot shows that for a P/E10 of 25 one can expect a 10-year annualized return of between -5% and +5%.  So caution is certainly indicated and one should consider market-timing models, such as the ones listed in Appendix D, to time one’s exposure to the stock market.

9 comments on “Estimating Stock Market Returns to 2020 and Beyond: Update January 2014”

Posted on Jan 2, 2014 by Georg Vrba
← 9 Comments
With reference to Section 202(a)(11)(D) of the Investment Advisers Act: We are Engineers and not Investment Advisers, read more ... By the mere act of reading this page and navigating this site you acknowledge, agree to, and abide by the Terms of Use / Disclaimer