In a previous article I demonstrated that one could get high returns by using a ranking system, and periodically rebalancing one’s portfolio to hold only the 10 highest ranked stocks of a S&P 500 stock pool.  One can further improve returns by  ensuring that the pool does not contain poor performing stocks.  Removing poor performing stocks from the S&P 500 pool and adding high performing stocks resulted in a pool of 429 stocks to which I applied my ranking/trading system.  It stands to reason that selecting stocks from a pool of high performance stocks will produce higher returns than if one selected from a pool of less well performing stocks. This is indeed the case.  Best10+ produced annual returns of about 50% over the last 14 years, versus 35% if one had only used all the stocks of the S&P 500 to select from.

An argument can be made that the modification to the composition of the S&P 500 stock pool is based on hindsight. That is true, and I am not claiming that an investor in 1999 would have been able to assemble this exact pool of companies from which Best10+ makes its selection.  However, one could have assembled a stock pool having similar characteristics then, and modified it every few years to take account of changes in stock performances.

Going forward, it makes no sense to have stocks in a pool whose performances have been dismal, to say the least.  The expectation is that these stocks will also under-perform in the future.  Equally, why should one not include companies which are currently not in the S&P 500, or foreign ones, which have out-performed the market in the past and demonstrated this convincingly for a long time?  One can expect these companies to do well in the future too.

I therefore removed 91 stocks from the S&P 500 which had equal, or worse returns over the last 10 years than the S&P 500 index, and also those which had a maximum drawdown of 70% or higher.  There are currently a number of S&P 500 stocks which had negative annualized 10-year returns of almost -10% and drawdowns of over 80% in the last 10 years.  So why should one continue to have them in a pool where they can only diminish the performance of the group?

I added 20 stocks with better performance than S&P 500 index and drawdowns equal to, or lower than the index; not only stocks of American companies, but also stocks of U.S. listed foreign companies which have a large presence in the emerging markets and big market capitalizations.  This resulted in a pool of 429 companies for the model to select from.

The system then proceeds to periodically find the 10 highest ranked stocks of the pool using the ranking system, and trades them according to the trading rules, all as described below.

To find stocks which may be undervalued all 429 stocks of the modified S&P 500 pool are ranked weekly according to the following parameters:

with the highest rank obtainable being 100.

Stocks are sold from the portfolio once their ranks falls below 97 and replaced by the highest ranked stocks at that time.  The model does not restrict buying to stocks to those which are ranked 97 or higher.

The model assumes stocks to be bought and sold at the next day’s opening price after a signal is generated.  Variable slippage accounting for brokerage fees and transaction slippage were taken into account. (See the Appendix for variable slippage.)  Taxes are assumed to be deferred, as for retirement accounts.

The trading performance of the system is shown in Figure 1 further down.  The annualized return over the last 14 years and 5 months was an exceptionally high 50.4%, and the maximum draw-down was 55%, same as for SPY, the exchange traded fund which tracks the S&P 500 index.  $100 grew to about $36,000 over this period, and the system performed so well that there was no need to take one’s money out of the market during the business cycle contraction of 2001.

Annualized returns for periods of 2 to 14 years were all higher than 43%; they are listed in Table 2 in the Appendix. 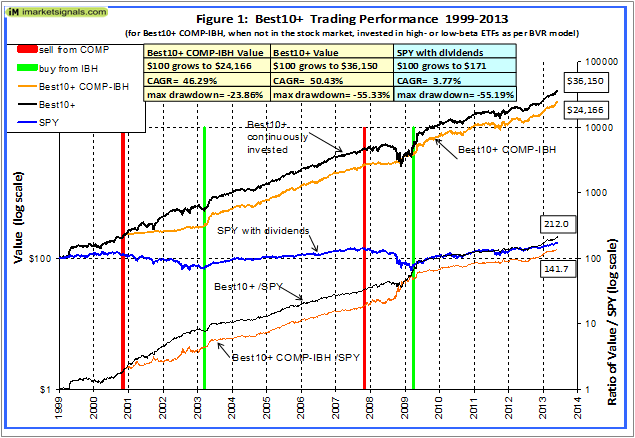 Also one can see from the general slope of the ratio graphs at the bottom of the chart that Best10+ always outperformed SPY, producing 212 times the value which one would have had from a 1999 buy-and-hold investment in SPY.

(Selecting from a pool of companies which did not include the additional 20 non-S&P 500 companies and only selecting the best 10 stocks from a reduced 409 stock pool of S&P 500 companies would have produced a CAGR of 46.7%, which is approximately 3% less than what Best10+ produced which selected from the combined pool of 429 stocks, but significantly higher than the CAGR of 35.2% from Best10, which selected from all the 500 stocks of the S&P 500.)

During the period from Jan-1999 to May-2013 there were two recessions. Returns can usually be increased, and drawdowns decreased, by placing the portfolio’s funds, when not in the stock market, into treasury bond funds.  My COMP-IBH system provides information when to exit the market and when to re-enter it, and the system’s buy and sell signals are shown in Figure 1 as the vertical green and red lines, respectively.

Following this strategy would have decreased the model’s annualized return to May 2013 by about 4%, however the maximum drawdown would have only been 24% instead of 55%, all as shown in Figure 1.

Annual performance from January to December ranged from a maximum of 170% for 2009 to a minimum of -24% for 2008, as can be seen in Figure 2. (This is the return if one had bought stocks on the first day of the year, then traded according to the model’s signals, and sold all the holdings on the last day of the year.) 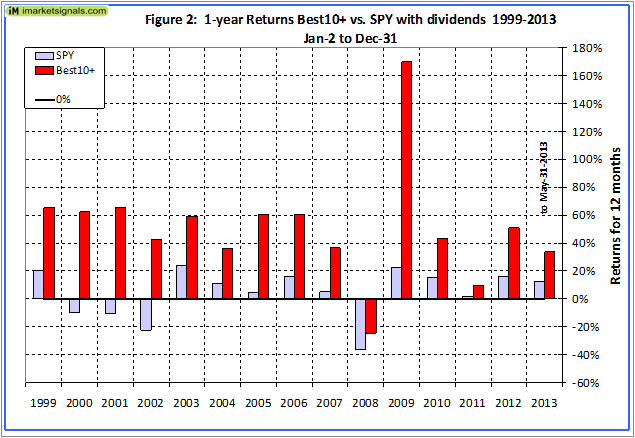 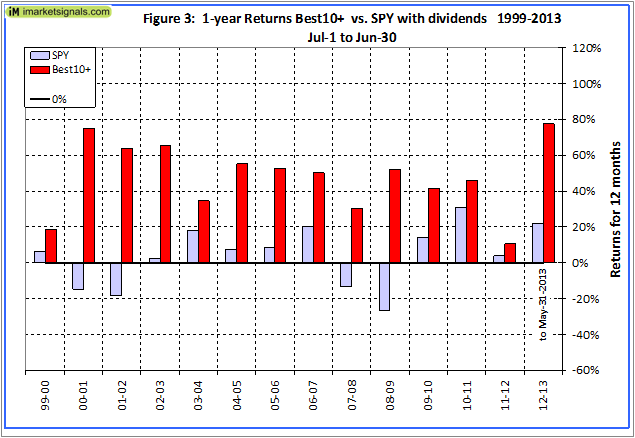 Making the same $1.00 annual investments in a portfolio managed according to the Best10+ trading system would have provided a terminal value of $757.77, as shown in Table 2 in the Appendix.  That is 34 times of what one would have had from an S&P 500 index fund.  Also one can see that the lowest annualized return over all the various time periods was 43.8%, namely for the period 2007-13.

Comparison of Best10+ with Best10 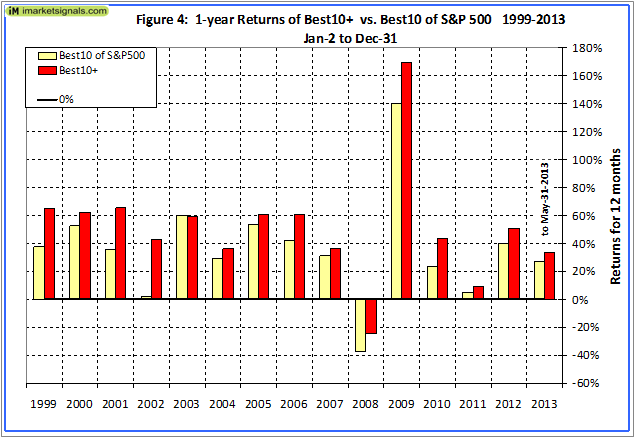 Table 3 in the Appendix lists the 26 trades during May 2013, and also the total trading volume for these stocks on the particular days. This portfolio has a value of almost $40-million and the individual trades require a large number of shares to be bought and sold.  Although the number of shares required to be traded is large, it is still only a small fraction of the total daily volume traded, on average 2.7% of the total, and the trades from this model would probably not have affected the stock prices detrimentally.  Thus the Best10+ system is suitable for sizeable portfolios, possibly up to a $50-million portfolio value, because all stocks in the pool are highly liquid and easy to trade.

Larger portfolios would require more stocks to be selected by the ranking system, but then one can expect the returns to be lower too.  For example, a Best15+ or a Best20+ portfolio would have produced annualized returns of 33.4% and 28.5%, respectively, lower than the 50.5% return of Best10+, but still amazingly high, nevertheless.

The intent of this analysis was not to provide an accurate number for a percentage return over time emanating from the use of this system, but to show that by holding a few of the highest ranked stocks of a pool of good companies one would always have outperformed a buy-and-hold investment in an S&P 500 index fund by a wide margin. Also by weeding out poor performers in the S&P 500 and adding better performers from outside the S&P 500 will increase investment returns by a few percent.

This portfolio management system does require trading of about 6 stocks a week (resulting in an average annual portfolio turnover of 910%), but this small weekly effort would have provided high returns.

A simple ranking system is consistently applied to the stock selection process, which makes this not a complex, high risk system which could easily break down.  Additionally, selecting only large and mid-cap stocks from a known pool of stocks assures liquidity, even if the portfolio value is big.

More particulars can be found on our website’s “Systems” page where one can also follow weekly the progress of a Best10+ portfolio having an inception date of January 2, 2009. 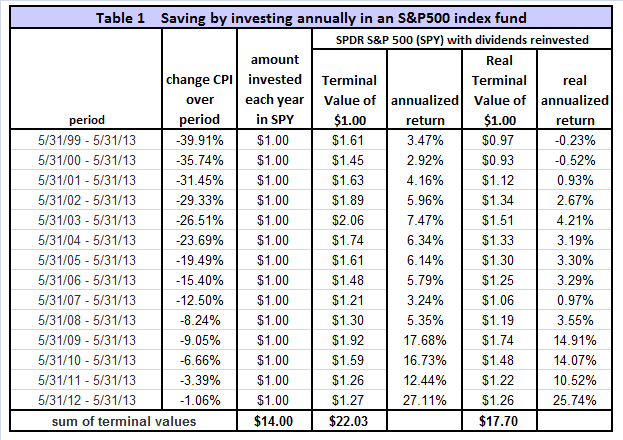 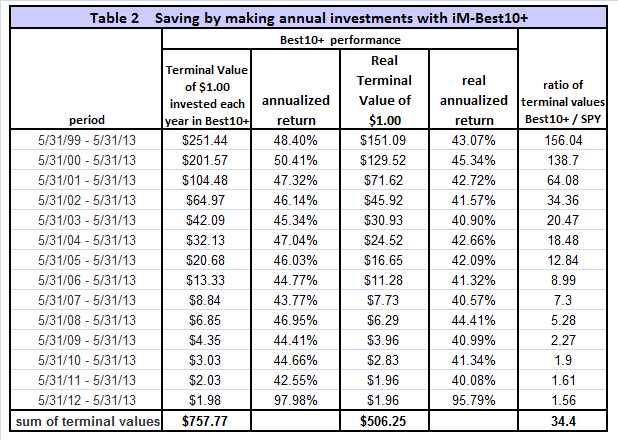 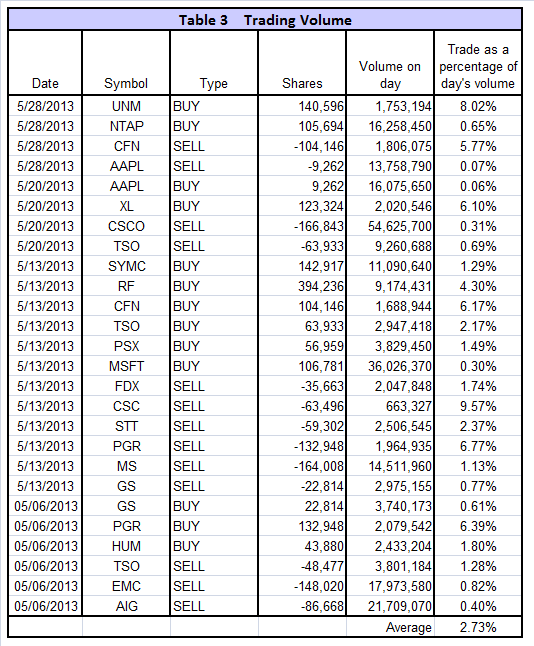 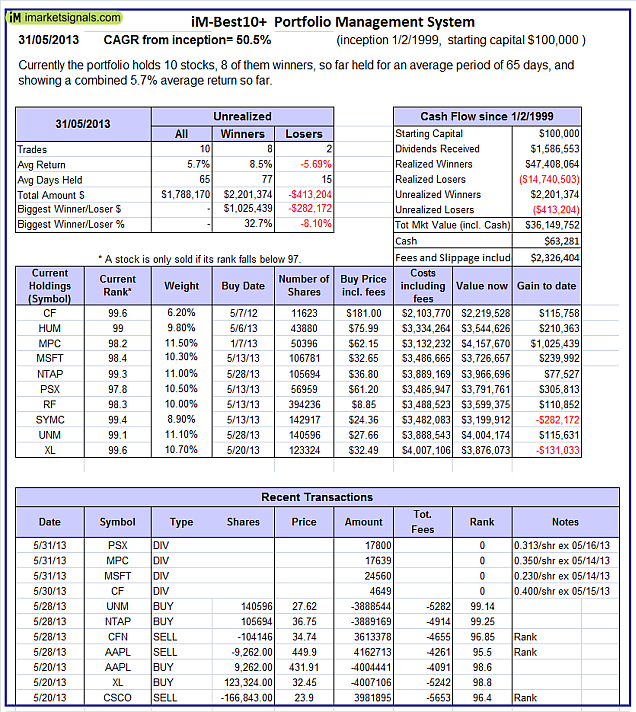 The slippage percentage is calculated for every transaction based on this algorithm:

1) The 10 day average of the daily traded $-amount is calculated (price*volume).
2) The slippage is set according to where the average falls in this table:

For the following transaction on 5/28/13

Posted on Jun 11, 2013 by Georg Vrba
With reference to Section 202(a)(11)(D) of the Investment Advisers Act: We are Engineers and not Investment Advisers, read more ... By the mere act of reading this page and navigating this site you acknowledge, agree to, and abide by the Terms of Use / Disclaimer