This Combo was presented as an example to demonstrate the risk reduction when combining simulation models with Best(SPY-SH). It was not an invitation to subscribe to the stock models at P123. The Combo is not available for subscription at iM, but could be simulated in a “book” at P123.  This would require a membership at P123 and subscriptions to the relevant R2G models as well.

Best(SPY-SH) switches between SPY and SH depending on market direction, and is beneficial in combination models.  Using a high performance model TWY5 from the web-based trading simulation platform and our Best8+ model, we demonstrate the benefit of combining these models with Best(SPY-SH) for reduced volatility, constant positive rolling returns, and high annualized returns with low drawdowns.

The benefit of adding Best(SPY-SH) is shown in Figures 4 and 4a, which depict the rolling 1-year returns for combinations of [TWY5, Best8+, Best(SPY-SH)] and [TWY5, Best(SPY-SH)], respectively – in both cases there were only positive returns. 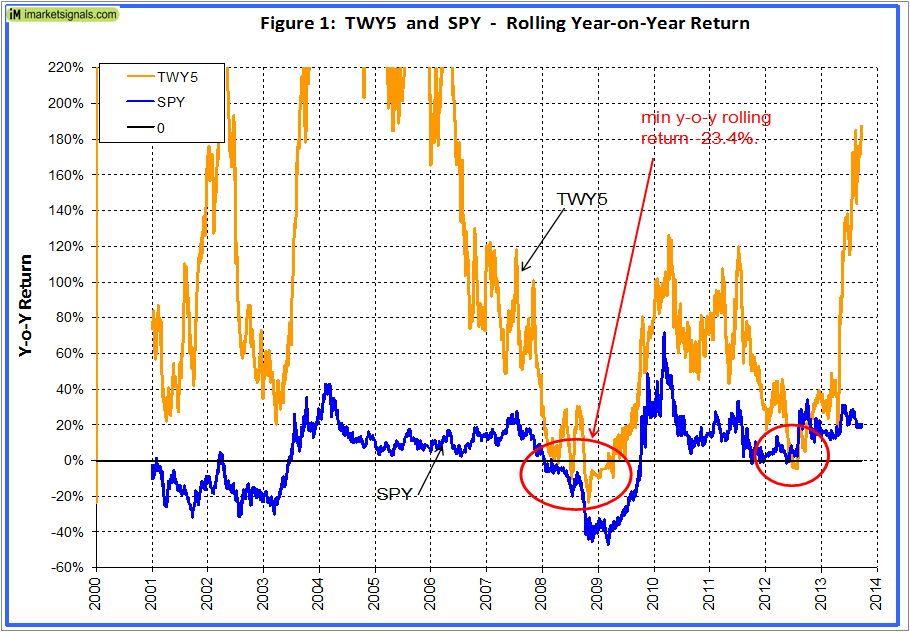 The equal weighted combination of TWY5 and Best(SPY-SH) produced very similar returns to the 3-model combination, with an asset mix of large-cap ETFs= 50% and micro-caps= 50%.  The annualized return would have been to 61.5% and the maximum drawdown also a low -16.6%, as shown in Figure 2a. 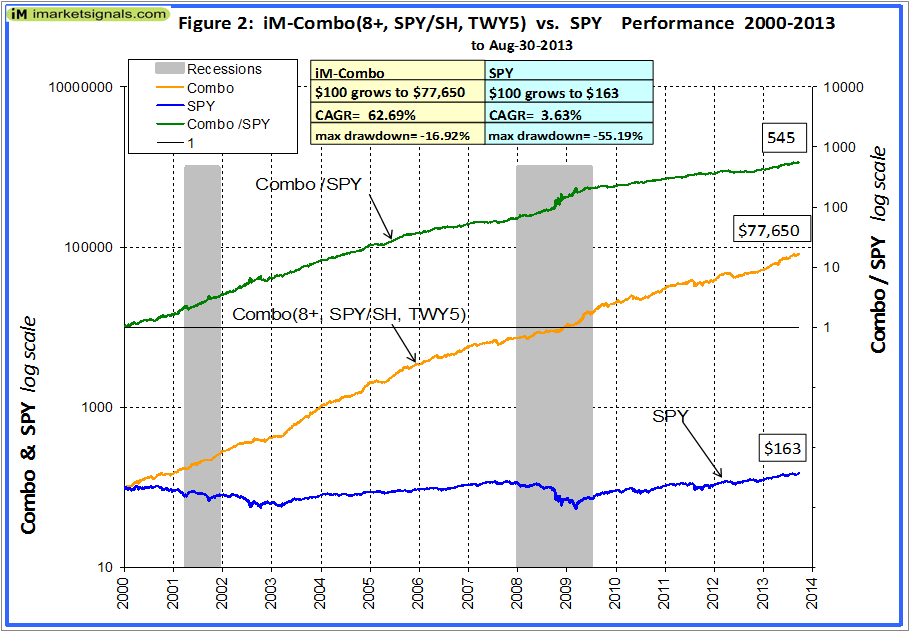 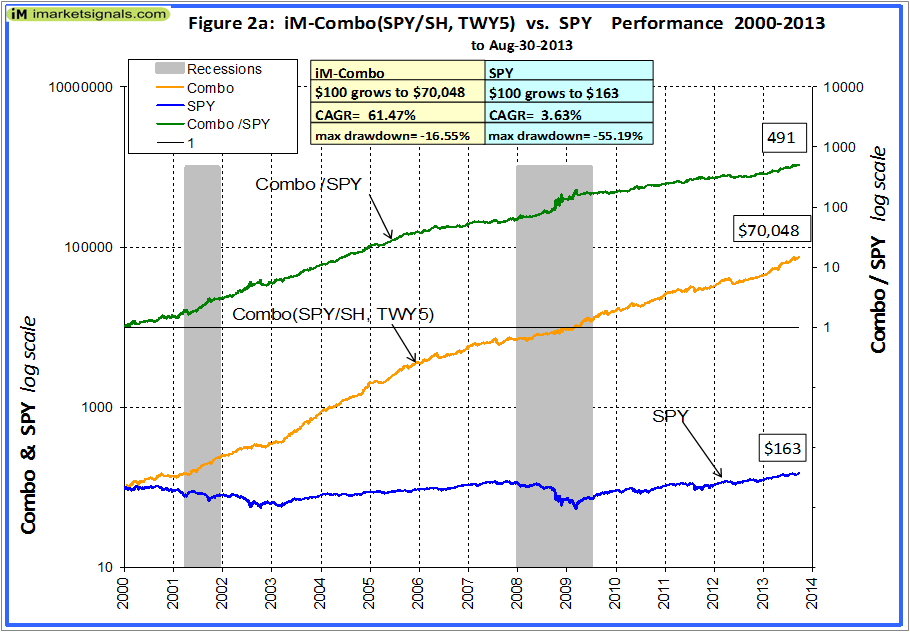 The annual returns are shown in Figure 3 and 3a for the 3-model and for the 2-model combination, respectively. 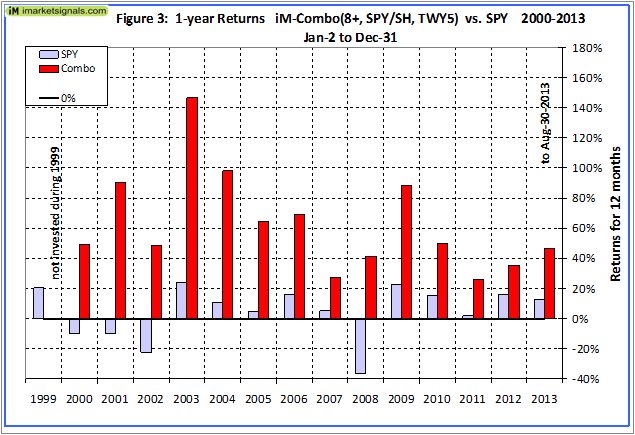 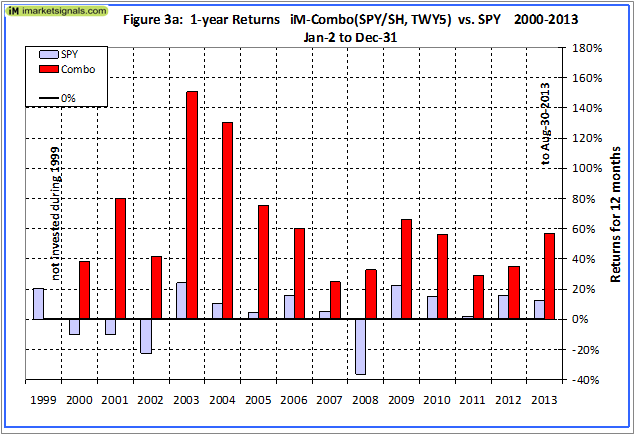 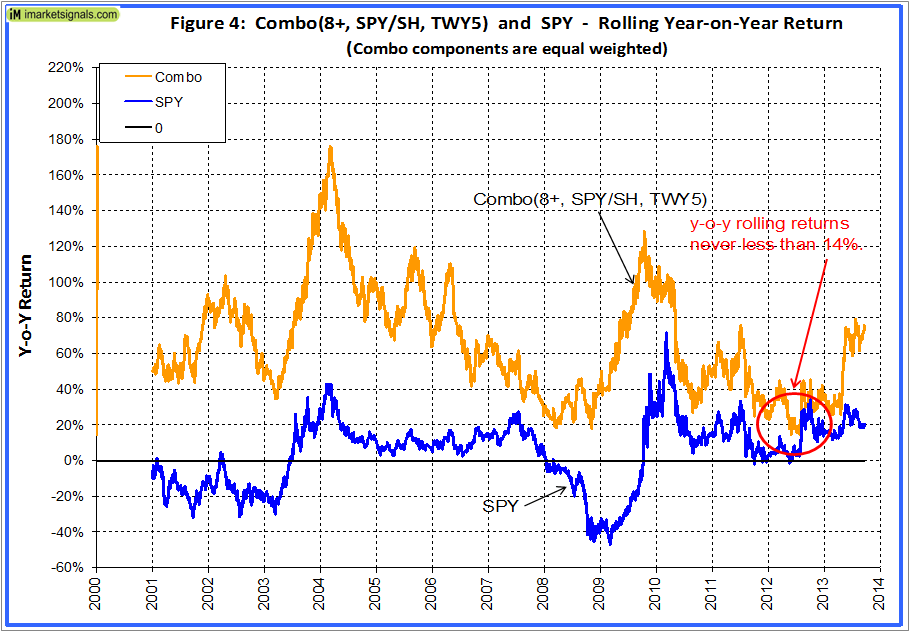 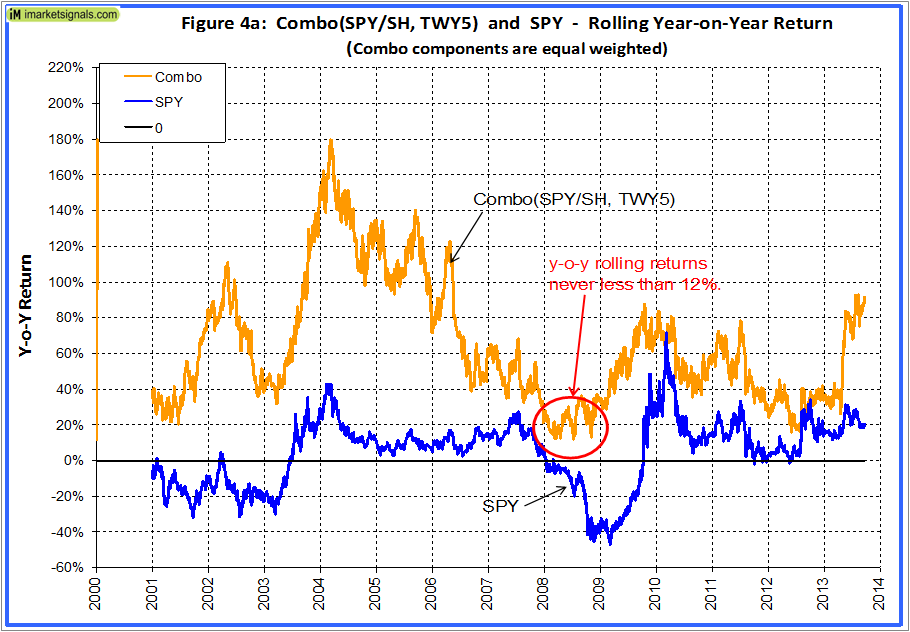 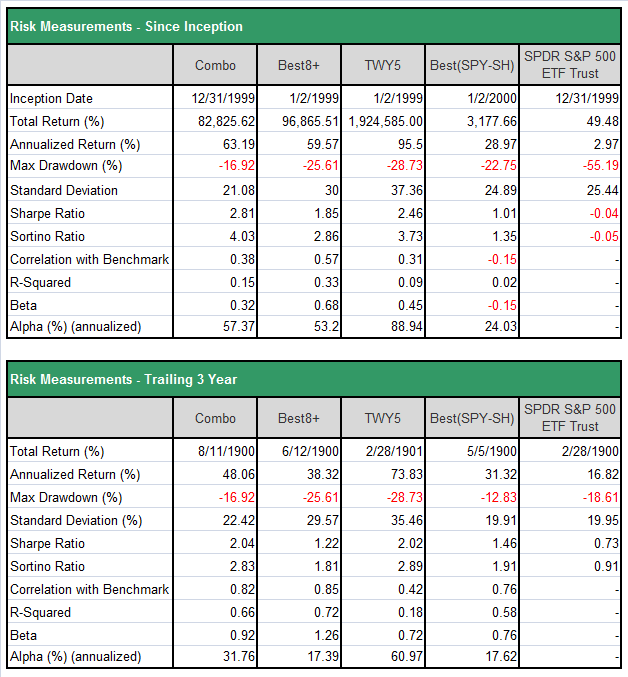 The maximum portfolio size is dependent on the liquidity of the stocks in the model.  To calculate the maximum size a portfolio can handle without incurring too much slippage the following formula is recommended:

– 5% is the maximum amount traded without affecting the stock price.
– Portfolios with low turnover allow far greater # of subscribers.

The micro-cap model TWY5 has the lowest liquidity of the bottom 20 Pct, and is thus the critical model in the combination.

Assuming each subscriber invested $30K, then the models should easily support 21 subscribers. Currently it has 6, and together with a sister model 23.

For the 3-model combination the portfolio size could therefore be 3-times higher, about $100K could be easily traded by 25 individual investors.

Posted on Sep 23, 2013 by Georg Vrba
With reference to Section 202(a)(11)(D) of the Investment Advisers Act: We are Engineers and not Investment Advisers, read more ... By the mere act of reading this page and navigating this site you acknowledge, agree to, and abide by the Terms of Use / Disclaimer