The iM Business Cycle Index (BCI) was designed for a timely signal before the beginning of a recession and is fully described in the three articles all found here. In summary, the iM BCI combines the following seven series of economic data: the 10-year treasury yield,  3-month treasury bill yield, S&P500, Continues Claims Seasonally Adjusted,  All Employees – Total Private Industries,  New houses for sale, and New houses sold.

The BCI on its own does not provide recession signals, but after further manipulation of the series two indicators are extracted that reliable signal looming recessions:

The two indicators BCIg and BCIp could be used as a sell signal for ETFs that track the stock markets, like SPY, IWV, VTI, etc. (see our article) or stocks in general.

Figure 1 plots BCIp, BCI, BCIg and the S&P 500 together with the thresholds (red lines) that need to be crossed to be able to call a recession. Here we note that BCIp now at 18.5 has crossed the 25 threshold firmly to the downside.  Historic data of the past recession shows that at this value the economy never recovered to avoid a recession. 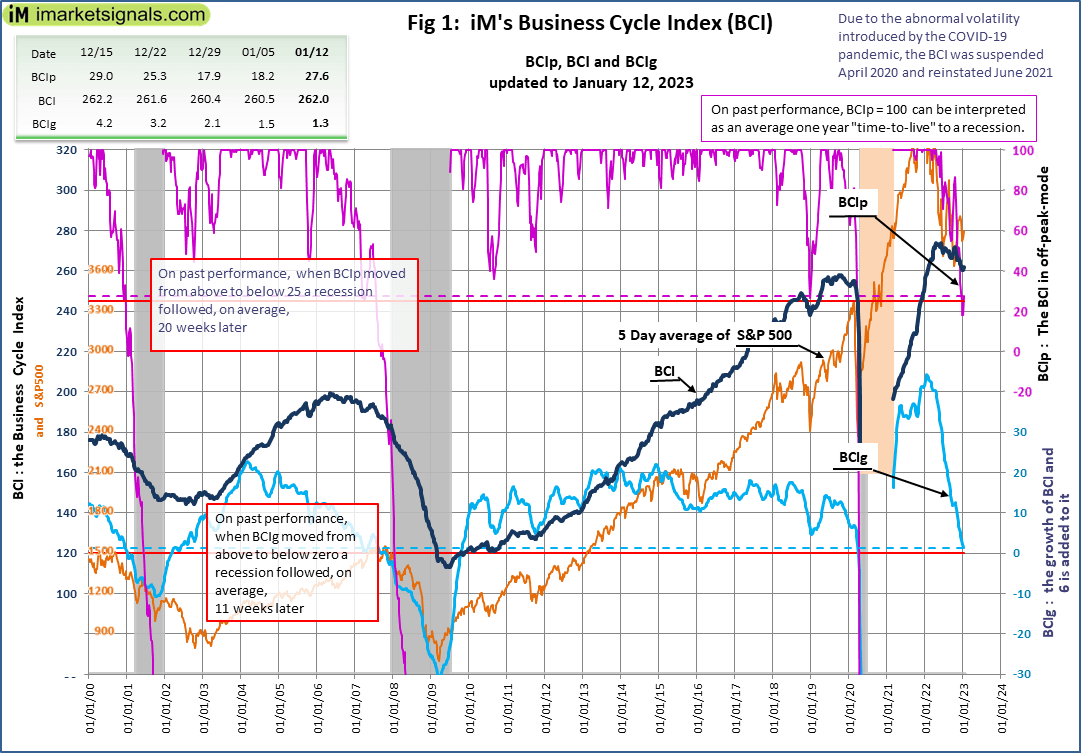 In our 2014 article iM’s BCIw: A Weeks to Recession Indicator  we show how the BCIp (deviation from previous peak of BCI) indicator can be transformed to a BCIw (weeks to next recession) derived from the previous BCIp tracks to the NBER defined recession.  The below Figure 2 plots the BCIw tracks to the past recession together with the current value of BCIw with its endpoint on the best fit average value of the past recessions. From this graph we identify that the BCI predicts the next recession to be at the earliest 12 weeks away but not later than 25 weeks. 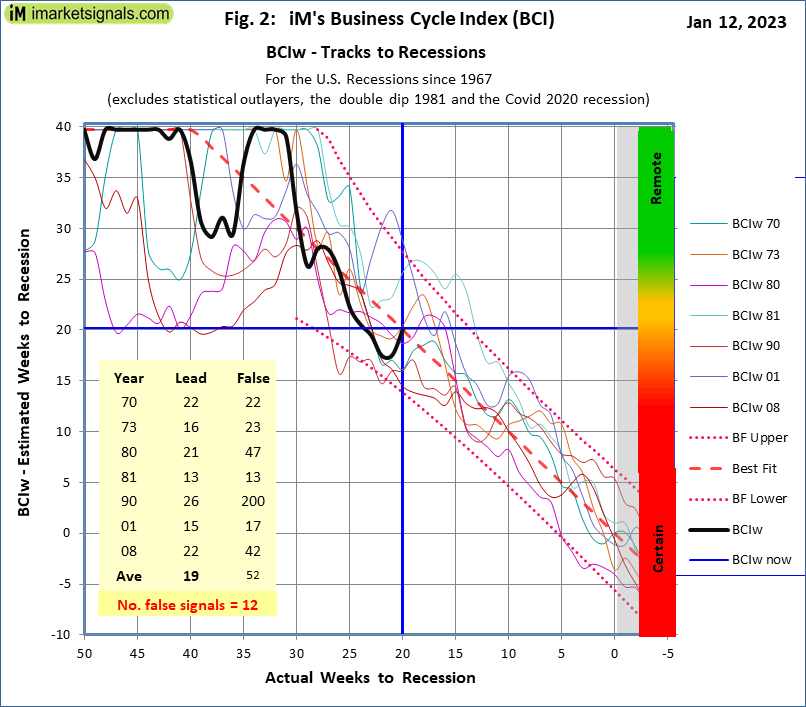 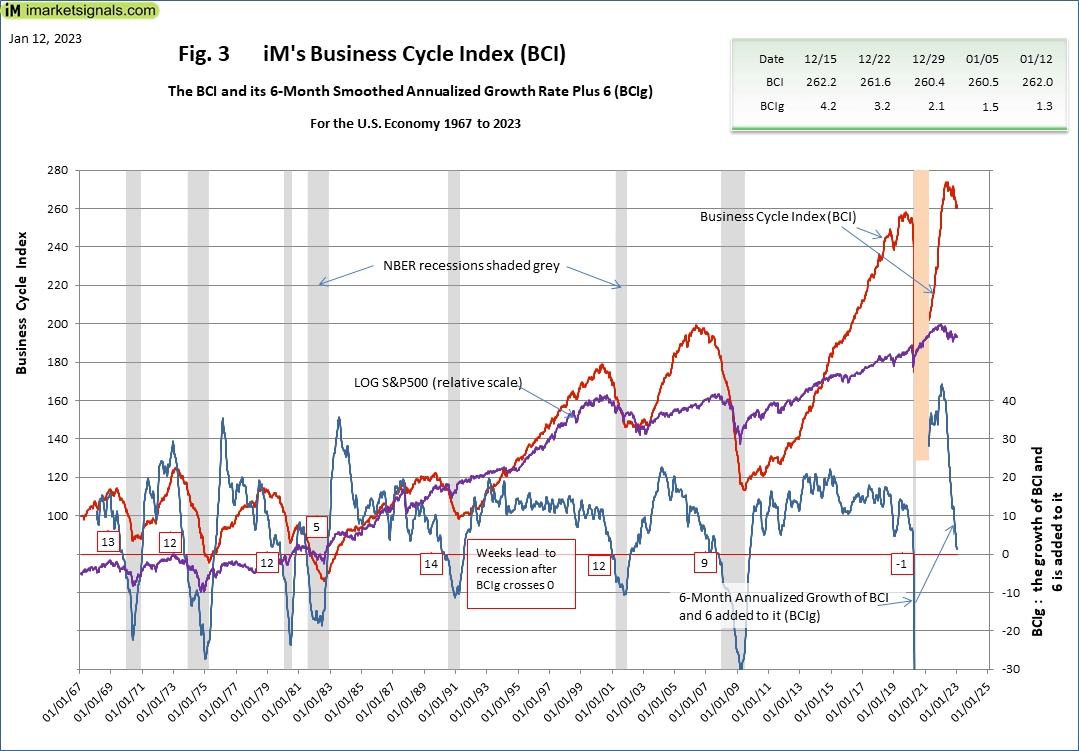 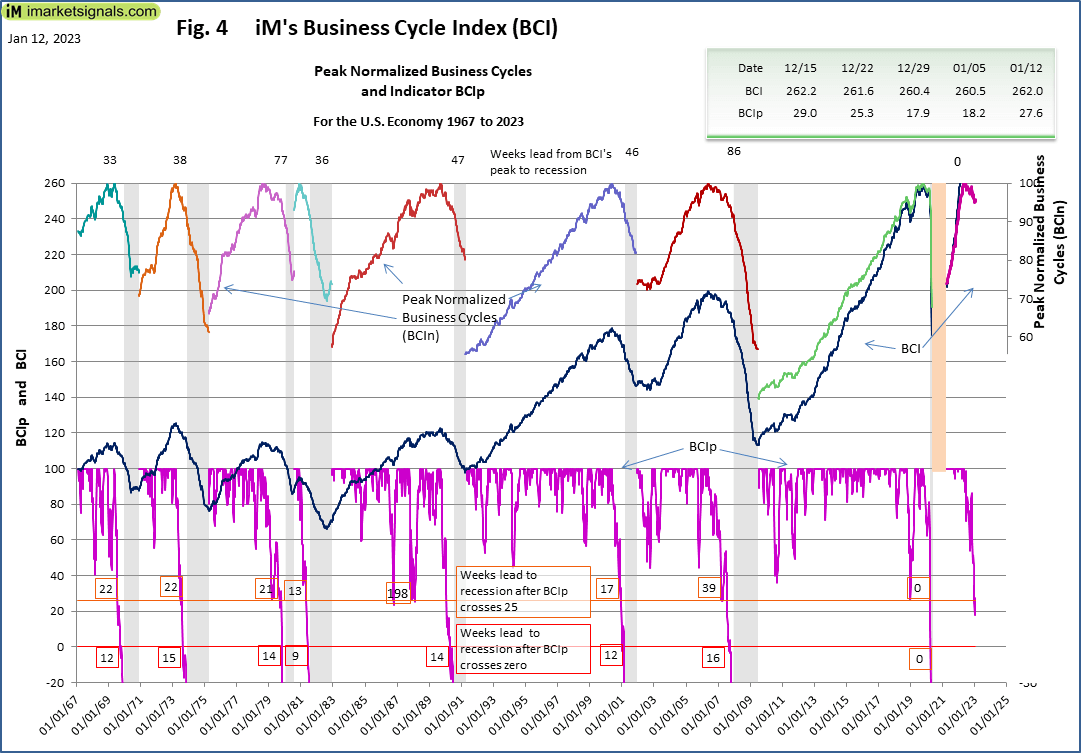 Also, the historical values can be downloaded from iMarketSignals as an MS Excel sheet.

Posted on Jan 12, 2023 by Anton Vrba
← 1 Comment
With reference to Section 202(a)(11)(D) of the Investment Advisers Act: We are Engineers and not Investment Advisers, read more ... By the mere act of reading this page and navigating this site you acknowledge, agree to, and abide by the Terms of Use / Disclaimer